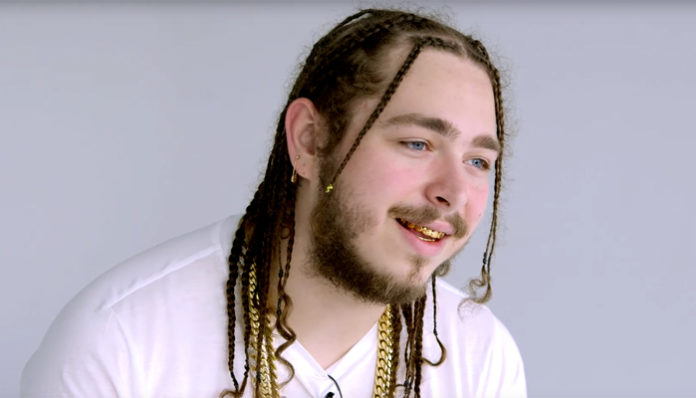 Austin Richard Post- better known as Post Malone first broke into the realm of rap with his 2015 debut single, White Iverson. Born in New York and raised in Texas, he started to play the guitar at the age of fifteen. Not long afterward, he auditioned for a local band called Crown the Empire however he ultimately did not get the spot. Not letting that get to him, he eventually started to record his own mix tape after learning how to produce music.

Later adopting his current stage name, he penned a few tracks including White Iversion which was then released via his SoundCloud account. A surprise hit, it gained over a million views within a week- from there there rest was history.

Since then, Post Malone’s career has only gotten increasingly more successful. In fact, it’s estimated that his fortune has broke the $1 million mark.

Curious about how he earned his wealth? Let’s take a closer look at his career.

How did Post Malone Make His Money and Wealth? 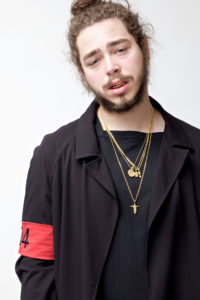 Born on July 4, 1995 in Syracuse, New York, Post Malone (Birth Name: Austin Richard Post) grew up in the city of Grapevine, Texas after his family relocated there when he was ten years old. Like most teens, he enjoyed sports and was especially fond of playing basketball; he also had one other interest- music. At the age of fifteen, he took up the guitar. Shortly afterward, he decided to audition for a local band called Crown the Empire, although it ultimately did not make the cut.

Eventually learning how to produce his own music with a program called FL Studio, he started to record his own mix tape in 2011. After he was done, he showed it to a few friends at school, which earned him some recognition. Following his high school graduation, he attended a country college for a few months, prior to dropping out and moving to Los Angeles. Once there, he adopted his current moniker and began collaborating with a few fellow musicians including Rex Kudo and Rich from FKi.

One of the tracks that came to be was the song, White Iversion. A reference to Allen Iverson, a professional basketball player, it was soon uploaded onto Post Malone’s new SoundCloud page. A surprise to everyone including Post Malone himself, the single ended up becoming a huge sensation, garnering over a million views within a month of its upload. In July 2015, the hip hop artist released an accompanying MV which has since been viewed more than 255,000,000 times online.

Responsible for the launching of his music career, White Iversion eventually reached number 14 on the US Billboard Top 100, number 5 on the Top R&B Songs and number 3 on the Top Rap Songs chart after being released through Republic Records that August. His hottest single to date, it has since gone platinum five times- a sure feat for the new artist!

In October of that same year, Post Malone followed up with a second single entitled, Too Young. Co-written by the artist himself with some help from Steven Bolden, Trocon Roberts Jr., and Carlos Suarez, along a few others, it served as his second single from his upcoming studio album at the time. Although it didn’t end up being as big of a sensation as his previous song, it still managed to reach number 108 on the Billboard Top 100.

By the end of 2015, his work (especially White Iversion) had earned him a hefty amount of change. According to various online sources, Post Malone had taken home upward of $300,000 that year! Not too bad for an artist who is just starting out in the music scene.

On April 21, 2016, Post Malone dropped his third single dubbed, Go Flex which was made available via digital download. A relative hit, it entered the Billboard Hot 100 record chart at number 94 and eventually reached number 43 on the Hot R&B and Hip Hop Songs chart; in Canada, it also reached number 74 on the Canadian Hot 100 chart. Off to a good start, the song later received gold accreditation from the RIAA after selling over 500,000 copies within the United States.

A few months later, the hip hop recording artist released his next single, Deja Vu. Featuring vocals from renowned Canadian star Justin Bieber, it reached several music charts including the US Billboard Hot 100, where it peaked at number 75 and the Top R&B Songs chart where it peaked at number 25. Outside of the US, the song also charted in the UK, France, and Canada.

On May 12, 2016, Post Malone came out with his debut mixtape, August 26th via Republic Records. Executively produced by himself with FKi, it included ten hip hop tracks, many of which featured guest appearances from artists such as Jeremih, Jaden Smith, Lil Yachty, Larry June, and 2 Chainz. Well received, it further cemented his place as an emerging R&B star.

That December, he released his long awaited debut studio album entitled, Stoney. Boasting close to an hour’s worth of music, it debuted on the Billboard Top 200 at number six, having sold 58,000 units within the first week; it eventually sold an additional 30,000 copies in the second week. Not only did the album eventually reach number three on the Top R&B and Hip Hop Albums chart, but it also charted in several other countries worldwide such as Belgium, Denmark, Finland, France, Norway, Sweden, New Zealand and the UK. To date, Stoney has sold more than 1,000,000 copies.

Without a question, 2016 was a productive year for Post Malone- not only did he released his debut album, but he also came out with a mixtape and two singles. Surely, the success of these releases had rewarded him greatly? So how much did all of these titles yield him that year? Allegedly upward of $200,000- although this has not been confirmed. 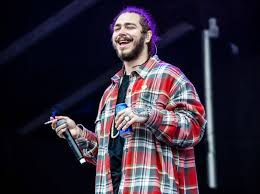 Like many celebrity artists, Post Malone also earns some side income from selling various merchandise such as sweatshirts, hats and T-shirts. Available for purchase through his official website, it would appear that said items are fairly popular as many pieces are currently sold out!

In addition to that, his income is also supplemented by the checks that he earns from performing at various events. For instance just looking at his schedule now, one can see that he has several dates planned over the next three months. Considering his growing popularity, it wouldn’t be surprising if he earned a few thousand dollars per show- and with all the dates, the amount is sure to add up!

Another source of earnings for the artist is his Youtube Page. If you’re a frequent user of the site, then you’re probably well aware of the fact that users are able to earn revenue by placing ads on their videos; according to reports, the amount can be upward of $2 per 1000 views. Looking at Post Malone’s Youtube Page, all of his videos have well surpassed a million views- in fact, his most popular upload entitled, “Post Malone – White Iversion” has been viewed over 286,000,000 times!

Will his fortune continue to grow over the next years? Given that he’s going to continue pushing out new music releases, we’re going to have to go with yes. Assuming that’s true, it wouldn’t be shocking if his net worth was to go into the multi-millions sometime in the future.

No, Post Malone is currently not married. However, it is said that he is currently dating a girl named Ashley- whom he’d met after she helped him to book a show at a nightclub.

In fact, just this past April the couple were caught in a bit of an awkward situation after they were invited to an interview on The Breakfast Club. On the show, Charlamagne Tha God implied that Post Malone is likely to cheat on his girlfriend, Ashlen. In response to that, the hip hop artist had to defend their relationship on social media.

You may be wondering- where did the popular artist get his stage name from? According to initial rumors, his moniker was a reference to Karl Malone, a professional basketball player (which seemed plausible seeing as he was a big fan of the sport). However, the singer himself later explained that that was untrue, and that he had simply “made ‘Malone’ up” and that Post was simply taken from his last name.

After graduating from Grapevine High School in Texas, Post Malone went to Tarrant Country College in Fort Worth although he ultimately dropped out after a few months-presumably to work on his budding music career at the time.

Seeing as how he’s good at keeping his personal life private and away from the public eye, it is currently known where exactly he’s residing. What is known however, is that he is living in the country’s entertainment capital of Los Angeles.

Considering this, we currently do not have any photos of his house to share at this moment.

Post Malone drives a ’92 Ford Explorer, which he originally purchased for $1700. In fact just recently, he customized with the vehicle with custom body paint, lambo-style doors, 26″ wheels and tires, which is said to have brought the car’s value up by at least $70,000.

Despite only being 21-year-old, Post Malone has a number of accomplishments under his belt. Since his debut in 2015, he has released a platinum-certified full length album, five singles (one of which has gone platinum four times), one mix tape, and three music videos, White Inversion. Aside from that, he has also collaborated with several popular artists including 50 Cent, Zuse, Gucci Mane, Moxie Raia, DJ Drama, and Mac Miller.

As mentioned earlier, Post Malone is currently busy hitting the roads for his concert tour. Currently, he is scheduled to perform in various cities in the United States, as well as Canada, Portugal, Germany, Iceland, and the United Kingdom.