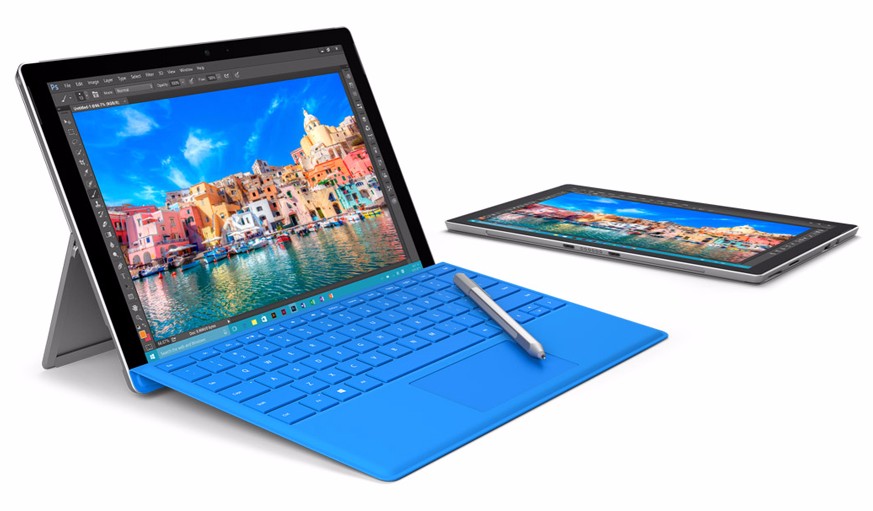 The Surface Pro 4 is almost a year and a half old now and is long overdue for an update. Thankfully, since it’s older, it’s now available at a lower price – down to $749 for the Core m3 version from $799. Is it still a good buy in 2017, or should you wait until Microsoft comes out with an update?

The Surface Pro 4 comes in a multitude of different configuration options, ranging from $749 all the way to $2599 for the highest end custom order option (i7, 16GB RAM, 1TB) . It’s stock configurations are:

That said you can sometimes find better deals at Amazon.com by clicking here for the discounted pricing.

The Surface Pro 4 houses some pretty powerful processors, except for the m3. The m3 version of the Surface Pro 4 is a laptop replacement, but it’s a real stretch and a far cry from being a desktop replacement. The i5 and i7 processors are all well and good but don’t expect desktop-level performance from this tablet. i5 and i7 are usually the flagship processors that Intel producers, but there’s a caveat with Surface Pro 4. The processors have a max TDP of 15W. If you don’t know what that means, usually within a family of processors, the higher the TDP, the more powerful it is. Desktop CPU i5’s are 65W, and the i5 in the MacBook Pro with touch bar is 25W. In addition to being more powerful, they usually require more cooling, and can also perform at their peak for longer. However, the advantage of having a lower TDP is that there’s less power being used at peak performance. In theory, this means that the m3 version of the Surface Pro 4 will have better battery life than the i5 and i7 versions. Battery life is usually the limiting factor, and the reason most laptops and 2-in-1’s have a low TDP processor. More on that later.

Alright, enough about the inside what about the outside? The Surface Pro 4 is made out of a magnesium exterior, and let me tell you; it’s beautiful. It’s miles better than any other brand’s ultrabook. The Microsoft logo is debossed and fitted with four sheets of mirror-like glass. It’s got a lovely edge to edge glass front, with a good looking hi-res display. The kickstand is smooth, and it’s got just the right amount of resistance to ensure that you don’t accidentally push your surface flat, while at the same time making it easy to adjust. However, it’s pretty bad for lap use. It’s sharp and leaves unsightly marks on my thigh when I use it. The fact that the keyboard isn’t rigid, and is more like a cover ruins the experience when using the Surface Pro 4 on your lap.

The almost compulsory type cover is pretty good. Even though it’s not the same as a desktop keyboard, it’s got a nice amount of travel. It’s clicky, and it’s a chiclet style keyboard. I’m a fan. It’s the best typing cover I’ve used, and probably one of the better laptop keyboards I’ve used. Way to go Microsoft. Obviously, it’s bested by Apple’s Macbook Air and Pro, but that’s to be expected, considering the premium you pay for it.

The trackpad on the Surface Pro 4 has been widened, and now has more surface area. It’s good, though it’s still small, and if it weren’t for the touchscreen, It’d be pretty difficult to navigate. This is especially apparent to me, as my main device is a 13-inch Macbook Pro 2016 with Touch Bar, with its humungous trackpad. The trackpad on the Surface Pro 4 is made of glass, so it provides a pretty good amount of glide.

My favorite part of the type cover is the ability for it to clip up, to give you a slight slant on it. It’s a nice addition to the already good type cover. However, I wish that there was some way Microsoft could make it so that you could lift the entire device by the type cover, like a keyboard, thus eliminating the need for a kickstand. The Type covers configuration options are also really confusing. You can buy a Type Cover with no illumination and no fingerprint scanner, one with a fingerprint scanner, OR one with backside illumination. Why isn’t there a version with both a fingerprint scanner and backlighting? This baffles me, considering there’s opportunity there for Microsoft to raise the price of the type cover considerably.

In this section, I’ll be basing the performance off the i5 model with 8GB of RAM, which I’d say is the bare minimum if it’s your only device. Performance browsing the web, and typing up documents is fine, and the fact that it’s run off of an SSD makes it extra snappy. The only time I ever saw the Surface Pro 4 lagging during normal use was with a ton chrome tabs open and Microsoft Office open with a picture rich document. Other than that, browsing is a pleasurable experience, especially if you use Microsoft Edge. As you might expect with an integrated GPU, gaming is where the Surface Pro 4 really struggles. I was able to get 40 frames per second on CSGO at 1920 x1080 on lowest settings, which isn’t great. Integrated graphics have come a long way, but not far enough yet.

Battery life on the Surface Pro 4 also isn’t amazing. This is probably because the sheer compactness of the entire package doesn’t allow for much battery. I was able to get 4 to 5.5 hours of normal usage, which is far from ideal. I ended up bringing the charger with me wherever I went with the Surface Pro 4, severely increasing the total weight of the package. This is a far cry from the 10 or so hours I got from the Macbook Air.

The Surface Pro 4 isn’t a budget minded option, nor it is it designed for budget minded people. It’s definitely a show of the future today, and that comes with a price tag. The Type Cover alone is $150, and combining that with the already steep price of the i5 Surface Pro 4, It’s not bang-for-buck. In fact, the tried-and-true Macbook Air in the same configuration, which, might I add is an awesome study device is actually cheaper than the Surface Pro 4 with it’s type cover by quite a lot. Around $300 difference in New Zealand. Obviously, the MacBook Air isn’t a tablet, and this is where the Surface Pro 4 aims to be. It wants to be in the tablet world, and in the laptop world. Frankly, right now, the surface can’t be in two places at once, and it tends to be right in the middle – not a tablet, not a laptop.

Who is this for?

The Surface Pro 4 is undoubtedly a good device, built primarily for productivity. If you just want a decent, super portable laptop for casual use, you’ve found the perfect device. It’s a slightly underpowered laptop. First, way overpowered tablet second. This isn’t an iPad replacement, there’s hardly any good games or entertainment apps on the Store. Also, make sure you’ve got deep pockets because, at any decent configuration, the Surface Pro 4 will set you back quite a bit.

The Surface Pro 4 is a good laptop and a mediocre tablet. It’s not the best, and it’s not as polished as I’d like it to be. It doesn’t represent value, and it’s a showcase of the future from 2015. It’s now the future from 2015, and it’s showing it’s age, especially with it’s lack of USB-C. I’d say to wait for the next iteration unless you desperately need a good 2-in-1 right now. It’s the best 2-in-1 in town, but also one of the most expensive.

Discount Update: To check out all the current discounts available at Amazon.com click here