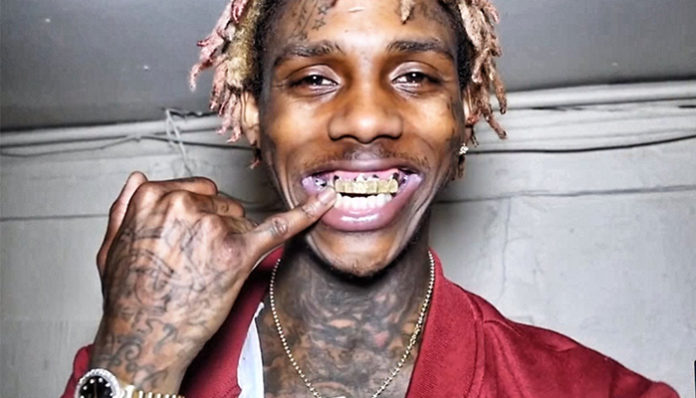 Chicago-based rapper Famous Dex first made himself known in 2015 with the track, Drippy Drippy. Known for his Southern-style beats and vibrant lyrics, he fell back upon music in his early twenties after losing his mother to cancer. Some of his initial hits include Hell Yeah, 4real, My Energy, and I’m Crazy.

Striving to the top, Dex has steadily been releasing music since his initial debut. So far, he’s dropped five solid mix-tapes including Drippy, #OhhMannGodddammn, Heartbreak Kid, Dexter The Robot, and Different. With a series of dynamic musical titles under his belt, his following has grown substantially over the last couple of years.

Considering his rising popularity, surely he has earned himself a sizeable fortune from the hip hop world? According to various sources, Famous Dex currently has a net worth of $600,000. How did he earn this money? Let’s take a closer look at his career and find out.

How did Famous Dex Make His Money & Wealth? 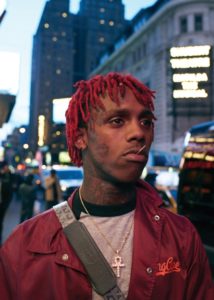 Born on September 6, 1993 in Chicago, Famous Dex (Real Name: Dexter Gore) grew up listening to music at a young age. Raised in the neighbourhood of Englewood, he lived only a few blocks from fellow rapper Chief Keef’s home. A student at Robeson High School, he spent much of his free time playing basketball as a teen. However, like many other youngsters, he soon found himself caught with the wrong crowd.

By the time he was in his mid teens, Dex had gotten involved with dope-slinging and robbery. As things started to escalate, he was eventually stabbed six times- an event that landed him a four-day stay at the hospital. Ultimately, it was this life-changing event that prompted him to turn his life around. Taking into consideration his love for hip hop, he later decided to pursue a career in music.

In 2015, Dex started to record and upload various Southern-influenced songs online. After releasing his first record, Drippy Drippy later that year, he dropped his debut mixtape, Drippy on January 7, 2016. Accompanied by a parental advisory label, the product contained ten tracks, most of which have been kicking around for a while- some of the titles include: Stuck in the Sky, Oh Man God Damn, Back Now, Do What I Do, I Get The Drip From MY Walk, and Back Now.

Hosted by DJ Shon, Drippy proved to be a successful venture, having quickly racked up the views online. The last time we checked, it had been streamed over 137,000 times on Datpiff and more than 168,000 times on Soundcloud.

On March 2, 2016, Dex released his next single, Hell Yeah, which featured the New York based rapper, Rich the Kid. Continuing with his earlier momentum, the song- a brilliant showcase of his enthusiastic vocals, became a solid addition to his growing catalogue. Well received by his fans, the collaboration has since been played close to 10,000 times online. Coincidentally, the Chicago rapper was also featured in DJ Carnage’s new collab song, RARI, which was made available that same day.

Not even a week later, the artist dropped his second mixtape, #OhhMannGoddDamm. Once again hosted by DJ Shon, it marked his first release since signing to Rich Forever Music- Rich the Kid’s new music label. Featuring Lil Yachty, Dice Soho, and Famous Irv, the tape came with brand new tracks including I Ain’t Talking Spaulding, Yeaaa Yeaaa, Hell Yeaaa Remix, Ran Off On Yo Bitch, and Ciabatta. As far as streams go, it has received over 210,000 hits on Datpiff alone.

On May 10, 2016, Dex pumped out another single, My Energy– which was taken from his upcoming mixtape, Heartbreak Kid. Although considerably more upbeat compared to his earlier work, it still featured his usual charismatic vocal work and ab-libbing. So far, the track has garnered close to 100,000 streams on the artist’s official Soundcloud account. Not only that, but its official MV has also been viewed over 3.8 million times on Youtube.

Five days later, he delivered a new bouncy track, I’m Crazy, which featured both Lil Yachty and Rich The Kid. A follow up to My Energy, it features a Sci Fi-influenced beat on which the trio raps about their wild lifestyles. On HNHH, the single has been listened to over 22,000 times.

From there, he teamed up with his label boss again in Goyard (Feat. Rich The Kid). Made available on May 26, 2016, it features a bass heavy beat by 808 Mafia, on which the two rappers trade verses effortlessly through the track. Produced by Chris Fresh, the title quickly became one of Dex’s most popular songs at the time, with over 2 million streams on Soundcloud.

Prior to the release of his highly anticipated mixtape, Dex released the single, Rich Forever on June 6, 2016. A collaboration with Rich The Kid, it has been streamed tens of thousands of times online since it was first dropped online.

On June 12, 2016, the rapper dropped his long awaited release and his third mixtape of the year, Heartbreak Kid. Hosted by DJ Shon, as has been the case with his previous titles, the tape boasted twelve tracks including Rich Forever, Disrespectful, I’m Crazy, U Late, Count Up, and Never Saw. Of course, it also came with a few collabs with Lite Fortunato, Lil Yachty, Chino, and Rich the Kid. Since then, the project has received over 191,000 streams on Datpiff.

Later that month, Dex came out with his next single, 2 Times (Remix), which featured the likes of Rich The Kid and Wiz Khalifa. Back in 2015, he had uploaded the video for the track which has since gotten over 5 million hits Youtube. A tribute to Gucci Mane, its stream count has surpassed the 2 million mark on Soundcloud- a telling sign of the rapper’s rising popularity.

Over the next few months, the rapper made a few guest appearances in DJ Twin’s Honor Roll, Ugly God’s Let’s Do It, and Rich The Kid’s Plug Calling (Remix). It wasn’t until September 20, 2016, that he returned with a brand new mixtape dubbed, Dexter the Robot. Produced by Big Head, and Maaly Raw, among others, it contained features from Quavo, Maxo Kream, Jose Guapo, Trill Sammy, and of course- Rich The Kid. Among the track list were the titles Living My Life, Going For Ten, Took Time, Speed Way, Pulled Up In Ghost, and Pressure.

His fifth mixtape of 2016, Different was eventually released on November 1, 2016. A celebration of everything that makes him unique, the project boasted seven tracks including Finish Him, All The Time, Jump In The Crowd, B4 The Nights Over, and Switching Off. Besides Rich The Kid, who by now is one of his regular collaborators, the tape also featured an appearance from Playboi Cart. Raved by fans, Different has since been viewed over 59,000 times and downloaded more than 12,000 times on HNHH.

Since then, Famous Dex has released a number of singles including Drip From My Walk (Remix) Feat. Lil Yachty, Gorgeous Feat. Thouxanbandfauni, Annoyed, Maybach, No Reason, among a few others. In addition to those, he’s also joined in on Swaghollywood’s Lil Moe (Remix), Rizzoo Rizzoo’s Sick of Me, and Rich The Kid’s Ain’t Ready.

Obviously, the rapper has earned himself a great deal of cash from his various record and tape releases. As far as other sources of revenue go, Dex also banks a considerable figure from putting on live concerts and shows. In fact in 2016 alone, he had performed at over 30 different venues across the country, from Columbus Ohio, to Chicago, Illinois. Looking at his current schedule, it would appear that he still has a few dates left for this summer- you can find more information on his tour on his official website.

Speaking of which, Dex has also set up an online shop where fans are able to purchase an array of merchandise items (a handful of which are already sold out!) from t-shirts to bomber jackets. Products currently range anywhere from $8 to $90.

Currently, the Chicago based rapper has an estimated net worth of $600,000. With all that he has going for him- singles, tapes and soon, studio album, this amount is almost guaranteed to go up.

While Famous Dex isn’t married, he was in a relationship as of 2016. Rumors of him beating up his girlfriend eventually surfaced on the web however, after an individual uploaded some security camera footage, in which the rapper can be seen physically assaulting a woman, whom is presumably his girlfriend.

In response to the ordeal, Famous Dex took to social media to apologize for his actions, stating that he was emotional at the time as “she was having an affair”.

Does Famous Dex Have Any Children?

No, the twenty three year old rapper does not have any children that we know of.

Did Famous Dex Go to College?

Not much is known about Famous Dex’s education history, although it can probably be assumed that he did not go to college. From what we can tell, he went straight into music after high school.

Where Does Famous Dex Get His Name From?

Unfortunately, the rapper whose real name is Dexter Gore Jr., has never explained the meaning behind his rather unique, stage name- “Famous Dex”.

Where Does Famous Dex Live? Pictures of Famous Dex’s House

Last year, Famous Dex bought his first house- a celebratory event that he shared with fans online. Allegedly worth $500,000, the rapper later showed off the home in a short video clip on social media.

What Kind of Car Does Famous Dex Drive?

This past February, Famous Dex was said to have purchased a luxurious Lamborghini at a local dealership- the rapper later showed off the high-end buy on his Instagram account.

Within just one year year, Famous Dex has successfully made himself known in the hip hop realm with five mix tapes, and a number of singles under his belt. Since he first signed with Rich The Kid’s music label, he’s even had the chance to collaborate with the likes of Billionaire Black, Jay Critch, Madeintyo, Lil Yachty, and Rizzoo Rizzoo, among others.

So far this year, Famous Dex has already offered his fans a handful of songs including My Year, I Live in LA, Don’t Trip, Big Blue, and No Reason.

Earlier this March, he also announced that he would be releasing his debut album, Dex Meet Dexter– the project was later made available on June 17, 2017. The project included the tracks: My Year, Came a Long Way, Feelin Stupid, Fans, Waiting On You.