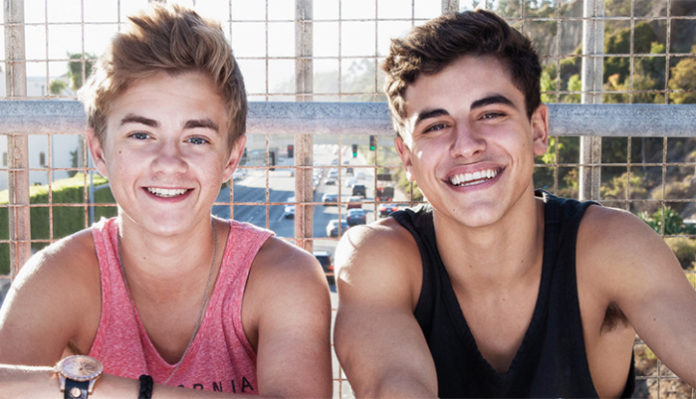 American pop duo, Jack & Jack initially rose to fame on the video-sharing app Vine in 2013. Consisting of Jack Gilinsky and Jack Johnson, the pair have been close friends ever since they met each other in kindergarten; they later attended the same high school in Omaha, Nebraska.

In 2007, the two kicked off their comedy career with the launch of their Youtube channel, MotherFalconQuagmire, where they posted parodies, and lip syncing music videos. Despite having been relatively successful, life eventually got in the way of updating after they finished high school.

It wasn’t until 2013 that they returned to the public eye on the new social media sensation, Vine. With their talent and skill set, they quickly garnered thousands of followers on the platform. As of 2014, Jack & Jack have also embarked on a music career together.

What is their net worth? How did they attain their wealth? We’ll be answering these questions below.

How did Jack & Jack Make Their Money & Wealth? 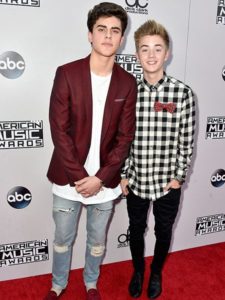 Jack & Jack- aka Jack Johnson (b. March 1996) and Jack Gilinsky (b. September 1996), were both born and raised in Omaha, Nebraska. Students at the same elementary school, they met and befriended each other in kindergarten after realizing they both had the same outfit on, with the same name. The two eventually advanced to the same high school- Omaha Westside High School together.

At the age of eleven, the friends began their online career with the launch of their first Youtube collaboration channel, MotherFalconQuagmire. Upon creating their account, Jack & Jack began uploading a number of satire videos including short parodies, and lip syncing music videos. Despite the fact that it was only a side hobby for the pair, it proved to be relatively successful.

By January 2011, their Youtube channel had amassed close to 2,000 subscribers- quite a feat for a pair of fifteen year olds! Although they had a considerable audience, constantly uploading new videos soon proved to be challenging after the friends entered high school. Jack & Jack’s last video on the channel, In Grandpa’s Name, was posted in September 2011; it has since been viewed over 63,000 times.

Ultimately, it wasn’t until the summer of 2013, that the comedy duo returned to the public eye on the new social media app, Vine. That July, Johnson created a Vine account under his name to which he posted his first clip. Eventually reconnecting, the two soon rebranded the joint account, Jack & Jack.

That August, the friends received a huge breakthrough after their Nerd Vandals Vine went viral, having collected thousands upon thousands of views within a short period. Incredibly popular, the clip was later hailed as “the perfect vine” by Huffington Post, whom shared it with their readers. Thanks to the feature, their follower count quickly broke through the 25,000 mark.

Throughout their Vine career, Jack & Jack uploaded a number of six-second covers, parodies, and comedic stints, all of which garnered them widespread popularity. As their presence continued to grow, they eventually joined the Magcon Tour in 2014, which saw them touring with a number of fellow Vine stars including Cameron Dallas, Jack Gilinsky, Hayes Grier, Taylor Caniff, and a few others.

Although details are unknown, the two presumably earned a hefty amount from various endorsement deals and during their Vine career. For example, it’s not unheard of for a brand mention to yield an individual a few thousand dollars. By January 2017 (when Vine shut down), the duo had accumulated well over five million fans on their account, making them one of the top 20 Vine personalities.

Since then, Jack & Jack have shifted focus; as of 2014, they’ve been releasing music as a pop-rock duo. Prior to this, the friends had recorded a few songs with the Eakin brothers- their first unofficial single was that of Indoor Recess, a track recorded in a makeshift studio at the time.

On January 28, 2014, they dropped their first original single, Distance. From there, Jack & Jack released the songs Flights, and Paradise (Never Change), before reaching the music chart for the first time with Doing It Right, which peaked at number 41 on the Top R&B Songs chart.

Next, the pair received a big break with their fifth single Wild Life, which was made available via digital download on August 2, 2014. Accompanied by a music video directed by Niklaus Lange, the urban pop track eventually reached number 87 on the Billboard Top 200, number 25 on the Top R&B Songs, and number 16 on the Top Rap Songs charts- making it one of their best charting singles to date.

Not even a week later, Jack & Jack released the single, Cold Hearted– a title that reached number 48 on the Top R&B Songs chart. Not long afterwards, they came out with Tides, which was then followed by Groove and Right Where You Are.

On December 9, 2014, the friends dropped their first collaboration, a single with American rapper, Skate. Titled, Like That, the song proved the be a major hit; shortly after being released, it settled at number 36 on the Top R&B Songs and number 25 on the Top Rap Songs record charts.

Prior to the end of the year, Jack & Jack released the title, Cheat Codes, a collab with Emblem3.

On July 24, 2015, the duo released their debut extended play, Calibraska. An independent project, it boasted four songs- How We Livin, Wrong One, Shallow Love, and California- all of which were co-written by the pair themselves. Highly anticipated by fans, the EP reached the top of the US iTunes chart within a few hours of its release. In the United States, it eventually charted at number 12 on the Billboard Top 200.

After signing with Island Records, Jack & Jack dropped their second extended play, Gone on May 26, 2017. While it didn’t manage to chart, it did add five new songs to their catalogue- 2 Cigarettes, Hurt People, Falling, Distraction, and Last Thing.

Over the last couple of years, the Nebraska natives have also released a few songs with Wesley Stromberg, All Simpson, Madison Beer, Kalin and Myles, and DJ Rupp. Some of the titles include Bucket List, Party of the Year, All for Love, Roll ‘Em Up, Uber Confessions, and Throw Signs.

In addition to what they’ve earned from their records, Jack & Jack have also monetized their talent through concert tours. In the summer of 2014, the pair embarked on the DigitTour Jack and Jack, which saw them performing at 18 different cities across the United States. Not only did they perform music and comedy skits, but they was also plenty of fan interaction at the event. Incredibly popular, it ended up selling out in multiple cities.

After headlining a concert at Ralston Arena, a venue located in their hometown in 2014, they hit the roads again for their Jack & Jack Summer Tour of 2015. At one point, they even performed alongside Trevor Moran and Demi Lovato.

Capitalizing on their popularity, the duo have also set up an online store through their official website, in which fans are able to purchase merchandise from t-shirts to fleece onesies.

Through DigiTour Media, the same company who organized their tours, the pair also made their big screen debut in the documentary film, Jack and Jack: The Movie in 2014; it was released in the US on December 25, 2014.

Currently, it is estimated that Jack & Jack have a net worth of $1.5 million each, that is, $3 million combined. Although their career started on Youtube, ultimately it’s their music that has banked them a significant amount over the last couple of years. Having said that, their social media presence most definitely helps to bolster their overall popularity. With all that they have going for him, we’re inclined to believe that their net worth will continue to rise in the near future.

No, nether of the two are married.

Having said that, Jack Gilinsky recently took to social media to profess his love for his girlfriend, Madison Beer- a heartfelt moment that turned many fans into a puddle of tears.

As for his partner in crime, Jack Johnson, he hasn’t found the right girl yet- however, he has disclosed his type, that “personality is everything”. With his charms and looks, he probably won’t stay single for long!

Does Jack & Jack Have Any Children?

No, neither of them have any children that we know of.

Did Jack & Jack Go to College?

The last that we checked, the best friends had plans on going to college together at the University of Southern California.

From what we can gather, Jack & Jack (reside together?) in Los Angeles, California. Much to the dismay of fans however, details regarding their pad have never been revealed to the public.

Because of this, we do not have any pictures of their house to share at this time.

What kind of Car does Jack & Jack drive?

We do not have any information on the pairs’ vehicles at the time. Speaking of cars however, Jack Gilinsky was recently involved in a minor car accident while driving his girlfriend’s car, a Range Rover. Fortunately, the singer was not hurt in the crash.

Since they first made themselves known on social media in the late 2000’s, Jack & Jack have become one of the most popular rising talents in the United States. Not only have they been praised for their comedic talents, but they’ve since also embarked on a successful music career as a pop rap duo.

Out of their singles, Wild Life has sparked the most buzz, having reached number 87 on the Billboard Top 100. Throughout their music career thus far, the two have also had the chance to collaborate with the likes of Skate, Kalin and Myles, DJ Rupp, Wesley Stromberg, and Dylan Murray, among others.

This May, Jack & Jack released their second extended play, Gone on May 26, 2017 via Island Records.

As far as concerts go, they’ve recently performed on stage in Cambridge, Washington, and West Hollywood. So far, it doesn’t look like they have any other dates scheduled for later this year (however that’s always subject to change!).