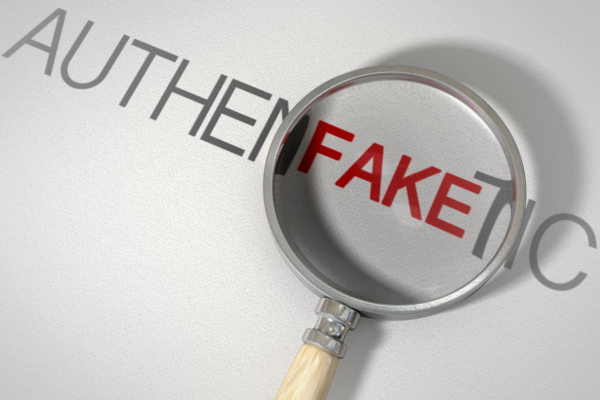 These days, you simply can’t trust your own eyes anymore. With photo and video editing software, everything can seem real enough, right up until someone on the internet points out how fake it is with a simple “shopped”. Here, we take a look at the top 10 images which fooled the internet into thinking they were real. 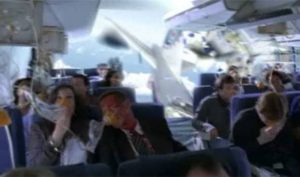 Let it never be said that the internet wastes a tragedy. This image was supposedly one right before Air France 447 hit the Atlantic Ocean, en route from Rio de Janeiro to Paris. Keep in mind that this photo was “recovered”, despite the fact there were no survivors of the crash and even the black boxes on the aircraft took two years to find, showing up on the ocean floor in May 2011, when the crash occurred in 2009. So where did this picture show up from? Well, it may not surprise too many people that this is in fact a still from the television series, Lost, which also includes a plane crash. I mean, come on, the camera work here is a little too perfect for a real viral image, don’t you think? 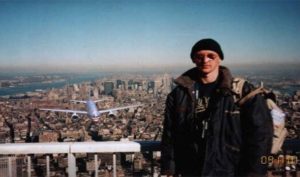 Another fake image that made the rounds of both the internet and in several instances of the news is this one. Taking advantage of the attention put on the 9/11 attacks immediately after, this photo showed up enarly immediately after the attacks, claiming to be from ground zero. Now, how do we know it’s a fake? Well, there are a few clues. First, we can tell that the background is of the North Manhattan skyline, meaning this would need to be the North Tower, which was struck at 8:45am. The problem here is there was no observation deck like the one in the picture. Even forgiving that detail, there’s a few simple questions we can ask to show this wasn’t real. First, who would pose, or who would take a picture of an oncoming jet like that? Even if both were deaf, it’d behoof the person holding the camera to try and get out of the direct line of the jet, which would have been blurred given speed. Then, how would a camera survive either a 110 story fall, or the heat of burning jet fuel (which, while it can’t melt steel beams, makes them sufficiently malleable to collapse under weight). Lastly, how could it be found the same day as the attack and spread to so many chain emails? 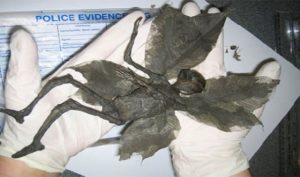 No top 10 viral image fakes would be complete without a little fake cryptozoology. This image was originally posted as an april fool’s joke, but really took off and stayed around for far longer than it should have. Sadly, the joke would be on Dan Baines, who made and “found” this body, as soon people would hound him for details about the creature and often harass him after he came clean and told everyone it was fake. Oddly, the harassment would only grow worse as people would admonish him for “covering up” the truth that the fairy he made totally existed. What a time to be alive. For those wondering, he did end up selling the prop on eBay for a hefty sum. 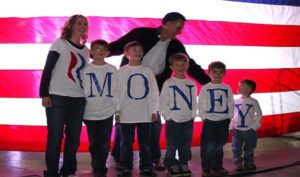 You want great photoshop fodder? Watch political election campaigns and just wait. Such was the case here in another viral image that was fake as the day is long. Now, while the boys here could have easily messed up and made this formation, it can be assumed at least a few very PR sensitive and image paranoid aides made sure that this wasn’t going to happen. Little did it matter though, as at least one photoshopper saw their shot and took it. Sometimes things are just too easy to not mess with. 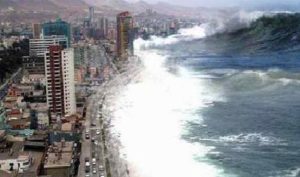 Back in 2004 there was a nasty tsunami caused by a 9.3 magnitude earthquake that nailed quite a bit of Africa and Asia. This photo, however, is not from any of those places. In fact, this is not even on the correct side of the globe for the earthquake and resulting tsunami to have affected it, being from Antofagasta, Chile. That still didn’t stop it from making the rounds as a chain email image for years, even with the giant wave photoshopped in, which given the comparison to the skyscrapers in the image seems very unlikely to ever exist even with a 10 magnitude quake powering it. 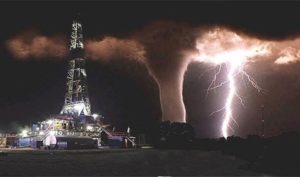 This next photo might surprise you in what is actually fake about it. Could it be the giant water spout? What about the bolt of lightning that is almost perfectly aligned with it and if real, would cause many to change pants in the immediate vicinity? Neither, the faked part about this image is the oil rig that happens to be shopped in nearby. The rest of the image were actual elements, captured by Fred Smith back in 1991. We’ve heard that Florida’s Natural Resource markets have sprung up everywhere, but certainly weren’t expecting them to show up to a picture like this. 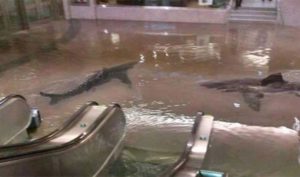 Make all the jokes about the television series Shark Tank you want, but if they had this in their lobby, no one would laugh. Luckily, this is totally fake. While there was a flood around these escalators, and there are sharks in Kuwait’s science center, the two have absolutely nothing to do with each other. The escalators shown in this image are in fact in Toronto, Canada’s Union Subway Station. This did flood as a result of extreme rainwater accumulation, so that part is real enough. However, (to our knowledge) there are no freshwater sharks that could make it down the drain pipes and expand, so no worries there. 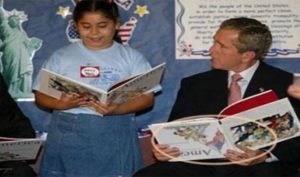 For those who are a little too young to remember good old “Dubbya”, this one may seem a little odd. But back in the day, George W. Bush was often thought of as a bit of an idiot, and was often made fun of for his “Bushisms” which could be construed as to make him seem like despite being an American, he didn’t quite grasp the language. Well, while he was not a McArthur Genius recipient by any means, he did graduate Harvard (supposedly with a C average but who’s counting) and you would think that by that merit alone, he could read. Well, one photoshopper decided to have a little fun with him at an elementary school, rotating the cover of the book 180 degrees to make it seem like he was holding it the wrong way. This viral image would last for years among democrats and disgruntled republicans alike, who didn’t agree or like him. Welcome to American politics, ladies and gentlemen. 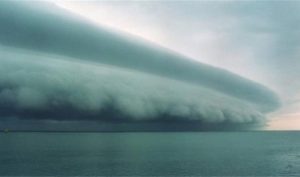 Now this viral image tends to pop up any time there’s a hurricane coming like clockwork. Often getting a ton of retweets or shares on Facebook, this image lends itself to be used a means of spreading a bit of fear, which is great for social media survival. Now, it’s not that supercells don’t happen as a result of powerful hurricane or tornado producing storms, it’s just not this one, despite it being so very photogenic. Regardless of how many times it’s downvoted or decried, it appears this one will be with us at least a little longer. 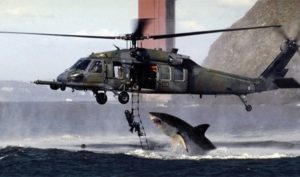 It’s weird to think that when I was a kid, one of my best friend’s parents had this viral image on their refrigerator door. In a time before Sharknado, people did in fact think this was a real deal, and used it as an image at times to show the bravery of the coast guard and how they should be respected (the latter will never be argued against by me). But, the truth is that while this could have been a picture of a guardsmen climbing up from the waters, that shark is about as fake as discount Kool-Aid fruit flavoring. Due to its massive popularity and endurance as a shopped photo, it wins this year’s title as the most viral fake image.

Have you seen a viral image you think belongs on this list? If so, feel free to mention it in the comments section as by the very nature of viral fakes, these tend to crop up quite regularly and may provide for a few laughs or an interesting snippet.