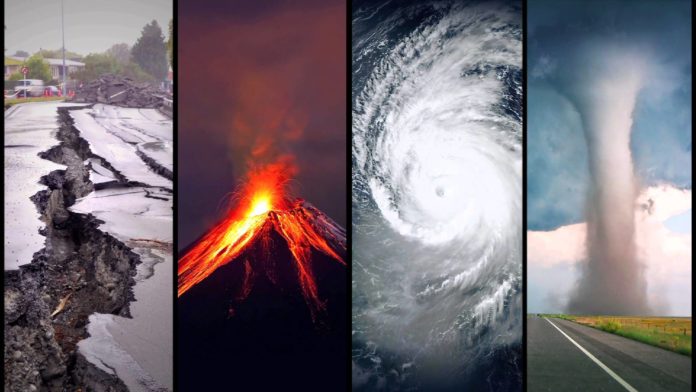 Life in general, and especially humanity can be delicate things. What can be seen on the cosmic scale as merely a planetary hiccup, or a momentary trend can cause an utter breakdown of what we see as our reality, our day to day life. And unfortunately, such events have happened before, without the modern benefits of mitigation strategies, emergency services and mass communication. Here, we take a look at the top 10 worst natural disasters of all time based on death toll and impact on the society affected. Lives lost are estimates based on multiple reporting sources to give the best comparisons. 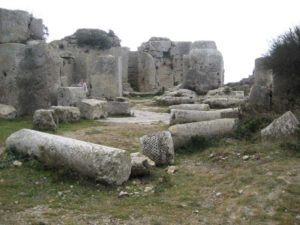 When people think of ancient disasters, many think of Pompeii as the granddaddy of them all. But the fact of the matter is, Pompeii’s death toll is only estimated at around 1.5% of this earthquake which occurred several centuries later. In what is now Turkey, a estimated 7.0 earthquake hit Antioch, which lies on not one, or two, but three separate fault lines converging together. There would be aftershocks for a year and a half after the initial event, which would see the land of the city swell up over 2 feet. This would cause economic catastrophe as their main shipping harbor was rendered useless, and homes were decimated. It is said that fires went on for days, and the high death toll was due to the large number of visitors from around the country who went to celebrate Ascension Day. 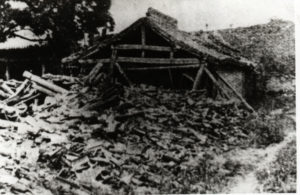 It’s rare that a disaster can hit the heart of a country, both metaphorically and literally. On December 16, 1920, a 7.8 magnitude earthquake shook the central part of China in the Gansu province. As one can imagine with a landlocked earthquake, nearby cities were wholly leveled, causing extreme damage throughout the country. Casualties were increased due to the cold weather, and a mix of homelessness and fear of living in structures immediately after the quake. Other effects of this earthquakes included floods, rerouting of river systems, and of course, landslides which buried entire villages. 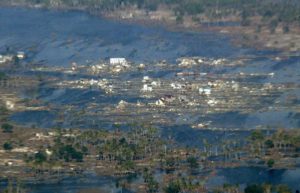 The day after Christmas, 2004, turned out to be a curse, and not a gift to mankind. Deep in the Burma tectonic plate and under the Indian Ocean, there was a 9.2 magnitude earthquake. This would send waves of enormous size across the whole of the ocean, and cause deaths everywhere from Indonesia to South Africa. Devastation was wide spread, as were bizarre reports of tsunami waves well over 10 meters (30 feet) tall, and brining ships over a mile inland from the shore, settling in on farm land. In total, not only were over a quarter of a million lives estimated to have been lost, but nearly one and three quarters of a million people became displaced, homeless, or without work. 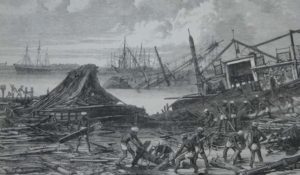 Racking up damage primarily in the Coringa region, this storm had a 40 foot surge, which ended up destroying the entirety of the harbor town, including the harbor itself. Most of those who lived in the city, and whose ships were docked there, did not survive. Even in recent history, the city has not actually recovered, most survivors leaving and letting this region go back to nature. Considered one of the first recorded Super Cyclones, this storm was one of the worst natural disasters at the time, and continues to make this list to this day. 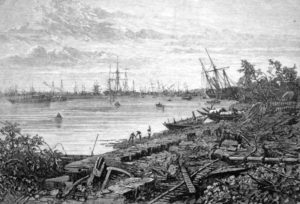 Before we get started with number 6 on the worst natural disasters of all time, some notes need to be made on the 1737 Cyclone. Firstly, there’s conflicting reports on whether it was a Cyclone, or a Cyclone and a concurrent earthquake (which, while extremely unlikely, is possible). Next, we have to take into account that the highest inhabitant count of the Calcutta area around this time was 20,000, meaning that a vast majority of casualties were outside the city and in the southern shores and harbors. That being said, reports at the time list as many as 20,000 ships in the area being destroyed, and subsequent damage to nearly every building within the city. 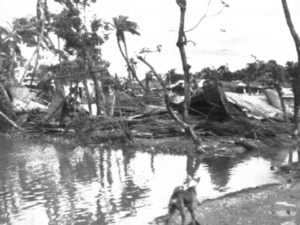 Bhola, a region that is now found within Bangladesh, may be a bit of a surprise to those who tend to follow storms. Usually in a region of one of the calmest seas, least prone to storms, this trend would be bucked on November 12, 1970. This storm would end up having wind speeds of around 150mph in several instances, but as the saying goes, it wasn’t that the wind was blowing, but what the wind was blowing. Storms and seawater would end up causing floods, mudslides and the destruction or salination of water wells. A vast majority of the deaths occurred soon after the storm, and primarily from old, extremely young, or sick populations. It is often commented that had the government allowed international aid in a more efficient manner, several thousands of lives could have been saved. 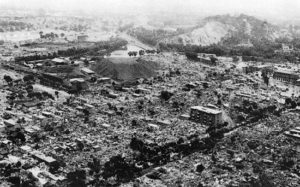 Making it to the number 4 spot is the single worst earthquake in the 19th and 20th century. Hitting in the early morning of July 28, 1976, this 7.8 magnitude quake was followed up later in the day with a 7.1 aftershock. Amazingly, the estimated nearly 448,500 death count could have been much worse, had it not been for two County leaders, Wang Chunqing and Ran Guangqi, who risked political exile and jail by going against orders and preparing for potential earthquakes. As a result of both command and community preparedness, no deaths were recorded in this area, despite 180,000 buildings being damaged. Oddly, after the earthquake, the communist government refused international aid, which certainly caused unneeded deaths in multiple communities across the country. This, along with several other events would cause a good deal of political turmoil. 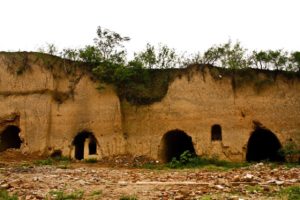 Recorded as the single most devastating and lethal earthquake in history is the January 23, 1556 quake. Due to uncertainty and no measurement capabilities at the time, magnitude estimates vary but tend to center around what would be an 8.0 magnitude quake. According to royal annals of the period, it was reported that mountains shifted and rivers rerouted. Sadly, also very many people died, sometimes over half of entire city populations. This was partly due to the sheer force of the quake, and that in the region, living in artificial caves (termed Yaodongs) was a popular practice. As one can imagine, this did not bode well in terms of infrastructural integrity. Predictably, landslides also were a major mortality factor. 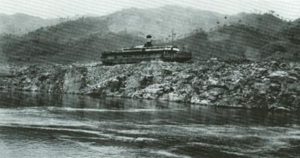 Runner up to the most devastating natural disaster is the 1887 Yellow River or Huang He flood. Unlike many of these disasters, this one may have been preventable, and built up over centuries. For hundreds of years, farmers of the region used to use the rich plains regions as planting grounds, using dikes to halt and divert the flow of the river to ensure a successful harvest. As this continued though, there was a buildup of silt and other river debris near the dikes themselves and allowing the river to crest dangerously close to the top of the dam. On September 28, 1887, a few days of heavy rain culminated the breaching of the dikes near the Huayuankou region, flooding 50,000 square miles. This displaced millions and caused a wide pandemic of water borne diseases in the area. Agricultural die-off also led to a food shortage which contributed to the death toll of this flood. 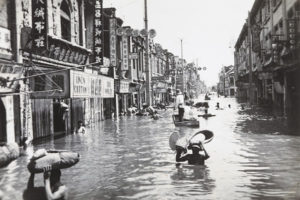 Coming in as the worst natural disaster in history is the China Floods of 1931, killing an estimated 2.5 Million people. How did it happen? Well, from around 1928 to 1930, China had been experiencing a record drought. This would be snapped by extremely heavy snowfall in the winter of 1930, which would then melt in 1931 creating a base level of flooding for the Yellow, Yangtze and Haui rivers. This would then be added to by an astounding cyclone cycle, where the nation experienced 9 storms where 2 was the annual average. In many places, 24 inches of rain in a month was not unheard of from July to November of that year. These flooding conditions would spell doom for many, including the island capital of China, Nanjing, which was right in the path. It is said that dikes nearby washed away, drowning 200,000 in their sleep, and that millions died within the capital, leaving the suvivors to suffer extreme economic poverty, waterborne illness, and even reports of cannibalism were not uncommon. Some twenty years later, this disaster would be a contributing factor for the development of the Three Gorges Dam project.

While not entirely natural in cause, The Great Chinese Famine deserves at least a nod due to the sheer impact of what became the “Three Years of Natural Disasters”. Often seen as a mix of natural conditions and policies arising from Mao Zedong’s “Great Leap Forward”, this 3 year span saw one of the highest death tolls for any naturally related event in history, with estimates anywhere from 15 to 45 million people losing their lives. Some key policies introduced at the time which contributed to the devastating loss of life were the “Deep Plowing” and “Sparrow Campaign” policies, which effectively buried useful topsoil and killed off birds which could have fed off crop-destroying insects.

This has been our list of the top 10 worst natural disasters of all time. Do you know of one that could rank among these? If so, be sure to comment below.