The breakout hit of 2015 in terms of RPG and Farm Simulators, Stardew Valley really showed that indie games could come in all shapes and colors in incredibly high quality. With elements of many favorites of previous generations such as Harvest Moon and Animal Crossing, Stardew Valley combines a feel good farming game with an air of mystery and a big sense of community. This is incredible, as the developer ConcernedApe (Eric Barone) was the sole developer for the nearly four years that it took to make this game. While the vanilla game is fantastic, there is one thing that can make any game better or extend its play: mods. Here, we take a look at the top 10 mods for Stardew Valley. 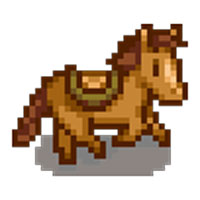 Starting off our list is one that’s a little close to my heart. Now, in my youth I used to help my father train horses from time to time, and often look back on those days with a great deal of nostalgia. So, when given a chance to hop on a horse in a farming sim game to escape the responsibilities, you can bet I jumped right on it. Sadly though, the stock horse features were sorely lacking in my opinion. To remedy this, several very helpful modders made some great edits to the game, including the Real Life Horses and Bigger Draft Horse Model mods. These make the horses appear like actual horses, which in my opinion makes a great game even better. To top it off, there’s also another mod, Redesigned Horse Running Animation, that makes the movements seem more fluid and natural. 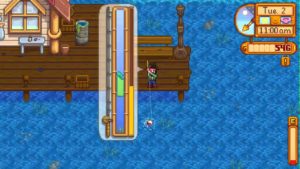 This mod is particularly handy if you’re early in game and are having trouble with arguably the most maddening task in an otherwise very pleasurable game, Fishing. Now for me, this is how I scrapped by enough cash to really upgrade my farm in the first year, with a small bumper crop and a whole lot of fish. And don’t I wish I had this mod installed then. Giving you a good idea of where to fish, what’s there to catch, and some perks to rewards streaks of good fishing luck, Teh’s mod is really well put together. If stringing enough catches together (with a potential bonus of an “unaware” fish that’s 50% easier to catch) you can be setting out with iridium grade catches well before you get an iridium rod, making saving up for that deluxe farm all the easier. Later on in game, you can even alter the game files through this mod to catch legendary fish multiple times.

Let it be said now, this ruins a new game. If this is your first time playing Stardew Valley or you’re in your first three years of the game and really want to enjoy it, skip over this one; seriously. Still here? Well, you’ve been warned. I’ve been of the opinion for a while that anything that resembles a “god mode” in most games degrades it down to a cookie clicker, a high score keeper and not much else. However, if you’ve been in the game a while and just want a little extra nudge for that new shack full of kegs, and don’t want to farm (ironic, for a farming game) for it, well then the CJB Cheat Menu may have your back. Offering time, money, energy, and invincibility manipulation, there’s little this monster of a mod can’t do. You can even set relationship levels and skill levels to max at any point. 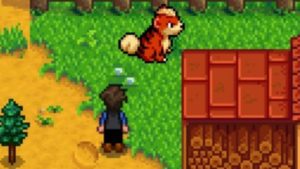 While not a terribly useful mod, this does make the game even more nostalgic and may be incredibly fun for Pokémon fans. With the release of Pokémon Go, plenty of people have been reliving their childhoods, and this is yet another chance to do so. Replacing both farm animals and monsters with select Pokémon, this has been a real community effort on behalf of the creators, and they even managed to add in small touches like many hats from the original game series. A great aesthetic mod, it’s recommended you give it a shot if you wanna raise ‘em all! 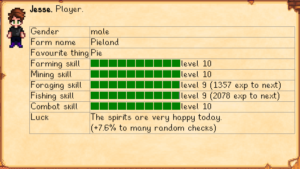 Do you sometimes forget what animals you’ve fed, if you’ve talked to everyone you needed to, or how long until you can harvest your plants? If so, the Lookup Anything Mod by Pathoschild may be a great option for you. Requiring a download of the SMAPI (Stardew valley Modding API) like many mods on this list, installation is easy, and the use of this mod makes it a more complete game, unless you of course like the more realistic guesswork of the original. You can even select yourself to see your own stats, including exactly how many points you have left until your next level(s), and your luck for the day both in description and percentage form. As a final quality feature, if you’re really into mining data instead of just ore, you can use advanced options to check the raw debug data and get plenty of information to start thinking about what mods you’d like to employ, or what really makes the game tick. 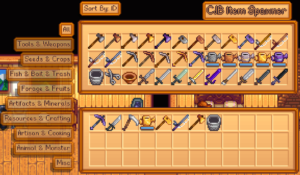 Now this one is a mod that is undoubtedly great, but like what the game has as a description for any alcoholic product “use in moderation”. I wish I would have discovered this mod during a few of the community chest challenges (especially the rabbit foot) and a couple of timed missions where I simply couldn’t harvest the plant in time, and the special items train was nowhere to be seen. That being said, I would not advise heavy use of this mod simply because it takes away quite a bit of the fun far too quickly. Sure, one item here or there is of no harm, but why farm when you can just collect a bunch of Ancient Fruits and dump them into the sell chest? 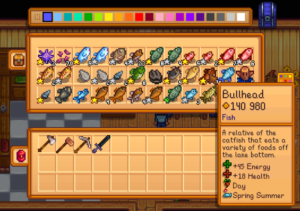 Whether you’ve been playing for 60 minutes or 70 hours, there’s a good chance that you’ve had trouble keeping up with all the implicit information and patterns within the game. In fact, I’m willing to bet that nearly everyone has played Stardew Valley with the Wiki in the back tab and cross checked where to find who to talk to, on what day, with what gift, and so on. Well, with the UI Info Suite, this becomes an issue of the past. Not only is it a great social tool in game to ensure birthdays are remembered and locations of those characters, it can also help with strategic placement of scarecrows and sprinklers, showing exactly what tiles will be covered. I feel that while some may consider this cheating, this is more an UI option that should have been there from the beginning, as it provides key info that’s otherwise hard to come by in game, but by no means breaks the experience. 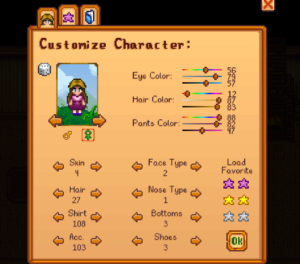 Something has always bothered me with Stardew Valley. You can have new buildings built out of wood you’ve cut down, make flour or sugar or drinks or jams from crops, and you can cook a wide variety of meals without problem. You can even collect dye producing materials. But what is one thing you absolutely can’t do in game? Make your own clothes or change your own appearance. That is, unless, you want to go into the Wizard’s house and essentially have a spell do it. The Get Dressed Mod seems to abate at least half of my complaints (I would still personally love to have the option of harvesting cotton, silk, etc.) and allows you to change clothes and appearance in your own house. Using a vanity mirror, you can change your clothes and colors of those clothes incredibly easily. You can also change physical features including gender. While I think that an addition of clothes crafting in game would be great, this is itself and excellent mod and holdover until such a thing happens. 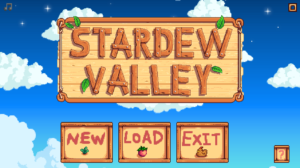 No offense to ConceredApe is meant here, as we understand that developing this game took four long years. But some people don’t have much patience for long intro screens, and after opening and playing the game for nearly 70 hours, I must say I’ve started to be among them. Again Pathoschild comes through with a mod that’s about as simple as you can get: You skip the intro and go straight into the first menu screen. This mod is great when you’ve accidentally closed out the game (and thus lost the day) and don’t want to have any more time wasted than you already must as a result of your own error. Therefore, this simple but incredibly useful mod makes it to number 2 of the top 10 mods for Stardew Valley.

Coming up as the top mod for Stardew Valley for 2018 is an offering from one of the most ambitious modders of the game, GnarlyJaspian. While all of these have been great mods, none have been quite as daring as to alter the game map so radically as this one, giving you so much more farming options in terms of property. Allowing for maps to be cleaner and without barriers (think those cliffs to the south), an optional river and a pond that actually produces fish, this is a farmers paradise of a mod. The best part is, Gnarly seems to have plenty of updates in store, as there are plans to install minecart and desert access via your property, as well as new NPC’s and expanded community facilities. With the game itself also being updated, this is an exciting time to play, and mod, Stardew Valley.