ASL Sign Sales & Service Update- What Happened After The Profit

ASL Sign Sales & Service is based out of Surfside Beach. Anthony and his girlfriend Kristin both moved from Long Island in order to start a family. They also want to start a business, which is made possible with the $200,000 loan from his father. ASL Sign Sales & Service was born. Unfortunately, all of the equipment and the trucks that they need to run the business were very expensive. They were able to generate $300,000 in sales in their second year and made $45,000 profit from that amount. That was not nearly enough for the owner. Anthony was very ambitious, and a little hotheaded. 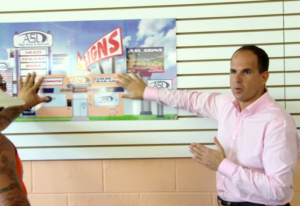 Marcus Lemonis walked up to the building for ASL Sign. He introduced himself to Anthony, who showed him around the store. Marcus asked Anthony to describe what ASL Sign Sales & Service actually does. Anthony let him know that they were a one-stop manufacturer for signs. He stated that he made all different kinds of signs with a low labor high-volume process. Marcus said that he didn’t know that they were also a sign manufacturer, and now he was intrigued.

Marcus introduced himself next to Josh, who ran the machinery and did the design work. Marcus asked Josh what Anthony did in the business since it seemed like Josh and Kristin did most of the work. Josh joked that they like to keep Anthony outside. Marcus asked if he was doing sales, but everyone vehemently said no. Josh said that Anthony was way too overbearing for sales work. Even his girlfriend said that he was overwhelming and loud.

Marcus discovered that Anthony just started getting a paycheck two months before Marcus showed up. His girlfriend, Kristen, who helped him run the business was not getting paid. Anthony stated that she got paid via his wages. He would buy her anything that she wanted.

Marcus asked about the hierarchy of the people there. Josh immediately pointed to Anthony and said that he liked to be the boss. Anthony agreed that he’d like to get things done the way he wanted to, and would also take responsibility for those decisions at the end of the day. Josh laughed and said that Anthony was very stubborn, and God asked upset or frustrated easily.

Marcus didn’t have a clear idea of the process involved in making all the signs, so he walked around the floor to talk to the employees. He walked back to the men who started the manufacturing process. They didn’t have a job assignment system in place that would let them see which salesperson was assigned to each sign. Marcus said that the shop seemed very disorganized. He then went to go see the salespeople. He began speaking with Edmund, who showed him a Bolton board with index cards of all of the potential customers he had. Marcus said that 1985 called and wanted it sales process back.

Marcus then approached Anthony’s father to ask more about Anthony’s process. The father, Louis, claimed that Anthony had borrowed over $200,000 but had never paid him back. Marcus looks shocked and asked if there was anything that he should know about Anthony. Louise said that Anthony thought he knew it all and wasn’t willing to listen to constructive criticism.

Next, Marcus witnessed a potential customer coming into ASL Sign Sales & Service. The customer is looking for a refurbished sign, and he was only a mile away. Anthony jumped up to take over speaking to the man from Josh. He offered to provide the men with business cards if he decided that he was interested. Marcus asked Anthony how he could go above and beyond for this customer. Anthony said that he could provide more free business cards, but Marcus said that that wasn’t serious enough. Kristin piped up and said that she would go there to make the sale since it was so close.

Anthony started to get heated and said that the normal process was to follow up with the new customer within a couple business days. Marcus insisted that he wasn’t trying to change Anthony’s process, he just wants to find out what the process was. Anthony took his sunglasses off, looking upset, and just simply stated that he thought that they had a good process. He walked away. Marcus expressed concern that Anthony wasn’t doing anything to hustle the sale while the customer was in the store.

Marcus was impressed with their financials. They seem to be cash flow positive with $135,000 in cash and receivables, and only $25,000 in debt. This was of course not counting Anthony’s debt to his father. Kristin explained that the debt to Louis was not on the books. Marcus said that he was seeing a good increase in sales over the years. Marcus discovered that Anthony’s father was paying half their rent each month. It seems less like a business financials set up, and more like a college student who’s mooching off his parents.

Marcus continued his conversation with Kristen. He discovered that not only did Louis not have any equity in the business, but neither did Kristin. Marcus was surprised at her work at the since she was involved in every aspect of the business without getting paid. He said that he felt like she didn’t feel like she was owed anything, she just wanted to put her head down and work for it. Marcus followed that up by saying that he didn’t feel that same sense from Anthony. Kristin claimed that Anthony would work as hard as she does.

Marcus let Kristin know that Anthony’s demeanor and know it all attitude could really affect the business. Marcus needs to feel comfortable with any business partner he took on. They met at a nearby restaurant. Marcus asked Anthony why he calls the profit since the business didn’t seem to be in trouble. Anthony said that he was looking for the next step in the business. He wanted to deal with more national companies instead of mom-and-pop companies. Marcus explains that they could have a business relationship where ASL Sign Sales & Service made all of Marcus is signed needs, but they didn’t need to be partners to do that. Marcus didn’t see a need for himself in the business.

Anthony spoke with his father. He said that he wasn’t willing to beg Marcus for the deal, but what it sounded like he meant was he wasn’t willing to change anything to get what Marcus could offer. He insisted that he didn’t want the money, he just wanted the businesses that Marcus could bring him. His dad looks exasperated, and he started to sweep the floor. Anthony walked away looking frustrated and told his dad that he paid him too much.

Marcus first went to work on the store’s outside appearance. There’s a lot of junk littered around. Marcus called a salvage company to take away all the junk to make space look more presentable. While the salvage yard was there, Marcus Anthony and Kristin started cleaning up the inside to make that look presentable as well. Marcus wanted to see a large sales presentation per when the customer first walked in.

Marcus next met with Josh to find out more about the graphic design elements. He asked Josh to take the artwork, and Josh said that the customer did well he attempted to sway them in the right way. Josh was currently working on something that Marcus said that he didn’t like. Josh told Marcus that Anthony was the one that picked the font, but he was working on something else. Marcus said the one that Josh was working on was nicer. When asked if the customer didn’t like Josh’s version, Josh explains that the customer never saw it and Anthony was the one with the problem.

Marcus pulled Anthony into Josh’s office. He asked Anthony is he trusted Josh’s judgment. Anthony admitted that he only did about half the time. Marcus explains that even if the customer likes the prettier but hard to read artwork, it would be better for their business to go with Josh’s clear design. Marcus informed Anthony that he needs to let everyone else do their own job.

Marcus dragged Anthony over to pirate land, which was the customer that came in the day before. While they were doing the sales presentation, Anthony kept jumping in over Joshua was trying to explain the semantics of the sign to the customer. Marcus told Anthony to shut up and let Josh talk. When Josh told the customer that the site would take three weeks from beginning to end, Anthony had another outburst. He insisted that the sign could be John in a week. The customer looked confused, and Marcus let Anthony and Josh know that they need to get their stories straight.

The encounter ended without a sale. Marcus, after hearing from several people that Anthony would make a terrible partner, finally made a decision. He decided to walk away from ASL Sign Sales & Service without making an investment. Things came to a head when Anthony cornered Marcus about being late to a meeting. Marcus informed him that he was not Anthony’s employee, and he walked out. Anthony broke down and attempted to apologize, but it was too late. Marcus was gone. 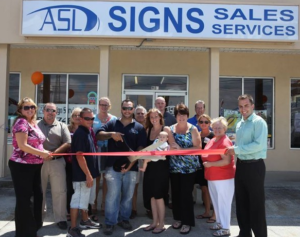 Even though Anthony and his temper did not make a deal with Marcus, ASL Sign Sales & Service is still going strong. They constantly update the company’s Facebook with photos of new signs that they made for companies such as Sago House Furniture, BNC Bank, and Fairfield Marietta. According to their website, all of the same employees are still there. It looks like Anthony and Kristin decided to make it official and get married. According to the business’s Twitter, they are now offering a new product – vehicle wraps!