George and Dragon Update- What Happened After Bar Rescue 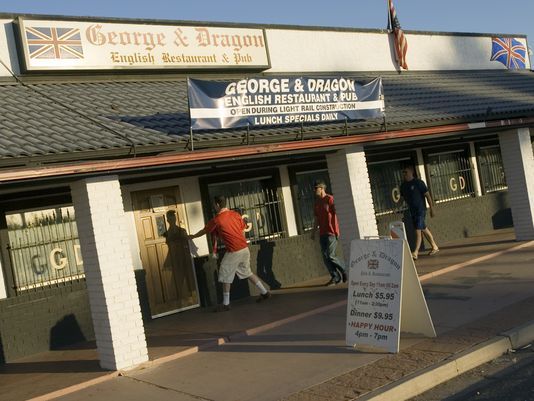 George and Dragon before Bar Rescue

In 1995, Englishman David Wimberley decided to move to Phoenix and open an English pub. David actually owned a pub in London for three years, so initially he came here to open a pub. That was his dream; his ex-wife and daughter moved to Phoenix, Arizonia, and then David, his mother, and his brother all moved to Phoenix as well, but to open up George and Dragon. For the family to open the bar together was a dream for his mom because she got to see her kids every day. For additional help, David brought his brother, Tony, onboard to manage the bar. Tony has been working with his brother for nearly 30 years.

As the first English pub in Arizonia, George and Dragon was an immediate success. For the first eight years, the bar was by far the most happening place in Central Phoenix. The bar would sit four people deep every weekday night from around 5:00 to 7:00, and in their best year, they did $1.9 million in sales. However, David admits that running the bar has not been fun for the past five or six years. David’s mother passed away five years ago and this really did a number on the family. Since the death of their mother, David lost his passion and drive, Tony says. Everything about the building is the same as it was 20 years ago. David simply will not change or adapt – and when you don’t adapt, you die.

The kitchen is disgusting, the stools are falling apart, and everything is embarrassing. As the bar fell further into disrepair, David’s focus turned towards socializing instead of running the bar. David has been “more focused on David than the pub.” David can be found at the bar playing poker four out of the seven nights a week, and can be found drinking almost every time he sits down at a table. However, when people are playing poker, they do not drink, and the money that’s being spent on the staff that is there not bartending is not making money. Now losing $5,000 a month, the 21-year old bar is months from closing its doors for good. The entire family is about $700,000 in debt, and with things the way they currently are, they are desperate for Jon Taffer to come in and perform a bar rescue.

George and Dragon on Bar Rescue

Outside of the George and Dragon in Phoenix, Arizona, Jon pulls up with his car full of experts. The first thing he mentions is that 13,000 cars a day go down the street they took to get there. The bar is on a very busy street, and mixologist Phil Wills agrees with him. Nationally recognized Irish chef Gavan Murphy sits in the back of the car, mentioning that the bar looks charming, but it also looks incredibly tacky. There are around 6 pubs in the town, but the George and Dragon is the only one owned by an Englishman. There are pieces of neon falling down in the window; Gavan explains that “pub” means public house, which is like a center of community for people to meet their friends and have a drink.

Phil just does not feel like he would be comfortable or welcome at the George and Dragon, solely based on its outside appearance. The inside is old, dated, and just seems uncared for. You cannot feel warmth in a room like that. David, the owner, is throwing a big poker tournament in the bar. However, he sits and plays poker, which drags him from running the bar to just being a patron. David and his mom ran the bar for 21 years, but unfortunately, his mom passed away 7 years ago. They’ve been losing money that entire time. David downs an entire pint of beer in one gulp. Tony, David’s brother, shows disgust for his brother when he lets out a belch. Tony was actually the one who called for Jon Taffer and Bar Rescue to help their bar.

Jen and Kat, the two bartenders, simply do not smile enough although they do a very good job. Jon sends in his two spies, one of which is Jay from 95.5 The Mountain, a local radio station. The first thing that Jay and Jill mention is the dingy look of the front of the bar, but nevertheless, they enter the 4,900 square foot space grossing $276 per square foot, $10 less than their required break-even point. The two spies enter, sit, and order a gin and tonic and an “Around the World.” The pour is absolutely horrible – there are five different flavored vodkas that are mixed into one drink, which makes it a five ounce drink (your typical beverage is 2 to 3 ounces of alcohol.) Phil writhes in his seat with discomfort.

Jay, however, complains that his drink is too weak, but Jill complains that her drink is too strong. However, the drink is a $9 drink, and Jon is upset. They are missing out on the sale of a second drink by making a strong drink. Jill has to try not to gag. As an English pub, they have a famous “fish and chips” dish. Cook Tim prepares the fries in the back, but the oil is disgusting and has never been changed. The fat and particles come off the fried item and sit in the oil, which make it disgusting and a potential health hazard. There are months and months of grime building up on the side of the fryer, all sitting inches away from the food. The fryer is also leaking, which makes it a total fire hazard.

The two spies receive their food, but the breading on the fish is thick and chewy. An authentic fish and chips uses a light beer batter, but Jill cannot even stomach more than a few bites. While this all goes on, David sits oblivious and playing poker. Nobody is drinking any alcohol, only a couple of waters. Dave complains that “the service sucks in here,” which Jon says is the kiss of death. Having seen enough, Jon storms into the George and Dragon to try and set things straight.

George and Dragon Now in 2018- The After ‘Bar Rescue’ Update

A few spoilers to get out of the way before launching into more details; George and Dragon is still open to this day and is still thriving. Thankfully, George’s mother’s legacy has not been spit upon by his poor attitude. The name “George and Dragon” was kept, and many of the specialties or nightly events that happened prior to the episode of Bar Rescue still happen. Of course, poker nights still happen on a weekly basis and are free to attend, but there is a minimum order of 1 food drink and 1 alcoholic beverage (meaning, of course, that you must be over the age of 21 to get into poker night.)

George and Dragon has over 300 Yelp reviews for a solid 3.8 stars out of 5 stars, although most of the complaints about the pub are about the lack of speedy/decent service. This seems to be a recurring problem, with many of the negative reviews pointing out that they waited 45 minutes to an hour for a drink or even to be acknowledged before they simply got up and left. The price of drinks is also a little disproportional compared to some of the other pubs/bars in the local Phoenix area. One interesting note is that George made an appearance on The Price is Right in 2013, hosted by Drew Carey, and won his showcase showdown to receive a motorcycle, car, and numerous other small prizes.