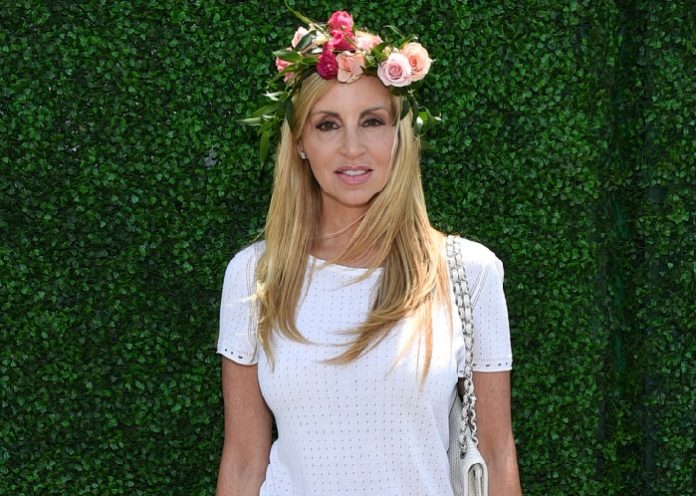 Camille Grammer has had some traumatic personal events to deal with in The Real Housewives of Beverly Hills, and she’s shared them all with fans of the show. Camille is best known as a model and actress although she has also worked as a producer and writer in television, and of course she’s well known for her marriage to Frasier star Kelsey Grammer, and her acrimonious split with the actor that was featured on the show. Camille has had a long career in show business, and it’s more varied than you may realize, but what’s Camille doing now in 2018? And when is she likely to be returning to our screens on The Real Housewives of Beverly Hills? Read on to find out.

Camille was born Camille Donatacci in Newport Beach, California on September 2nd 1968. She came from a successful family, her father was a financial adviser and after high school Camille went to Montclair State College, New Jersey to study English literature, but Camille also had an ambition to break into show business, and she studied in Los Angeles at the UCLA School of Theater, Film and Television as well.

Camille began her career in show business in the early 1980’s, originally as a dancer. She worked on Club MTV from 1987 and appeared regularly in the show for several years, but she also became quite well-known among New York’s trendy night-life scene for her part in a dance trio that performed regularly at the iconic Tavern on the Green restaurant. The trio, comprising of Camille, fellow Club MTV dancer Greg Telleri and Swedish dancer Sanna Ekman, couldn’t decide on a name for the act, rejecting several cheesy labels before finally deciding to perform without an official name for their act, but they performed for some heavyweight celebrities of the time while at the venue, including Grace Jones, Matt Dillon, Kate Moss and Kathleen Turner.

During the early 1990’s Camille won a few roles in music videos, she appeared in the video for ‘Give it All You Got’ from Chicago based metal group Rights of the Accused in 1991 and also danced in Manitoba’s Wild Kingdom’s ‘The Party Starts Now’. Camille’s appeal to metal and rock fans at the time is easy to understand, music videos of the genre at the time typically featured attractive slim blondes with great hair, and Camille fit the bill perfectly, but she also appeared in the video for the hip-hop classic track ‘Back to the Grill again’ from MC Serch during the early part of the nineties.

Camille and Her Marriage to Kelsey Grammer

Camille and Kelsey had a whirlwind romance, they first met in 1996 and they were married the following year in Malibu, California. Once she was married, Camille gave up the dancing gigs and together with Kelsey she founded the production company Grammnet Productions, which has since produced several successful shows, including the sitcoms ‘The Game’ and ‘Girlfriends’ for the CW Television Network, as well as the popular NBC drama series ‘Medium’. Camille worked as a writer and creator, as well as taking an occasional executive producer role at Grammnet Productions, and in October 2001 she gave birth to the couple’s first child, their daughter Mason.

The couple had a second child, a son Jude in 2004 and Camille mixed motherhood with working at Grammnet for the next few years. She was producer for the TV film ‘Mr St Nick’ in 2002 and voice acted in the adult animated series ‘Gary the Rat’ alongside her husband’s starring role for three episodes. In 2004 she produced a made-for-TV adaptation of ‘A Christmas Carol’ and in 2008 she worked on the comedy parody ‘An American Carol’, but in 2010 she was offered a role on the new reality show ‘The Real Housewives of Beverly Hills’, and that year everything about Camille’s life changed.

Camille Grammer And The Real Housewives Of Beverly Hills

In July 2010 Camille Gremmer filed for a divorce, she was seeking custody of the couple’s two children as well as child support. The upheaval in Camille’s private life may have been personally traumatic for her, but it made great TV, and the problems between her and Kelsey were well documented by the Real Housewives cameras. An episode aired in January 2011 in which Camille revealed to her co-stars that Kelsey wanted an end to the marriage, the episode was the highest rated cable show at the time and the episode was the most viewed in the first season. Camille’s personal life was falling to pieces but the strength she showed in dealing with her personal problems won her many fans amongst the Real Housewives viewers, and she was the main attraction to fans of the show when it returned for season two later that year.

Kelsey and Camille Grammer’s divorce was finalized in February 2011, but it had not been an amicable split. Kelsey accused Camille of only marrying him for fame and suggesting she thought she was married to Frasier Crane, but Camille countered with accusations of verbal and physical abuse during their thirteen year long relationship. Camille overcame the personal heartache and returned to acting. She appeared on the CBS show ‘$#*! My Dad Says’ where she played a recently divorced reality star called ‘Camille’. She described the role as a parody of her own life and her performances in The Real Housewives of Beverly Hills, but she also remarked how much she had enjoyed the experience and expressed a wish to get back into acting after years when her young children had come first.

Camille took a few other roles while filming the second series of Real Housewives, she co-hosted the CNN Showbiz Tonight special at the Acadamy Awards and persented the 2011 NHL Awards in Las Vegas, but in March 2012 she stepped down from her best known role and announced that she would not be returning to Real Housewives for a third season.

The Real Housewives of Beverly Hills is only a reality TV show, but of course it does focus on real relationships and friendships, even if some of the drama is exaggerated for the cameras, and Camille never strayed too far away from the show. She has maintained close friendships with several of her former co-stars and has appeared as a regular guest on the show ever since officially leaving it. Camille has been asked to return as a main cast member and although she keeps fans hanging in suspense by admitting she is considering it, and has been doing so for at least three years, as of yet she is still yet to make a commitment to returning to the show.

Camille Grammer has continued with the occasional acting role since her divorce, as well as her guest appearances on the Real Housewives she has appeared in ‘RuPaul’s Drag Race’ and played herself in an episode of the drama series ‘90210’. She was a guest on the comedy show ‘Betty White’s Off Their Rockers’ and took the role of Tanya in the 2014 comedy parody film ‘The Hungover Games’, but many of her fans would most like to see her back in the regular role that made her famous in the first place.

Camille was quizzed again in March 2017 at the Impact Awards in Los Angeles about a possible return to the Real Housewives, and she revealed why she is so hesitant to make the commitment to have her personal life aired in public again. She revealed that the strain of having her personal life and divorce so publicly exposed had been so tough that she was now unsure whether returning to the show would be the best thing for her. Although Camille has dealt with the emotional strain of her divorce from Kelsey Grammer long ago, he is not quite as ready to leave the past behind him.

Camille has spoken about the difficulty of co-parenting with someone who refuses to speak to her, and admitted that the ‘frosty’ relationship that she has with her ex has been hard on her and the children. In 2013 she was diagnosed with endometrial cancer, which required serious surgery, and she was heartbroken that Kelsey didn’t even get in touch with her to offer support. Mason is now 15 and Jude is 12 and Camille still feels that she needs to protect them from the possible negative media attention that a starring role on Real Housewives of Beverly Hills may bring, even more so now that she is a single mom, but Camille is moving on with her life and things are looking brighter and brighter for the reality TV star now in 2018.

In October 2016 Camille and the children moved into a new Mansion in Malibu, after she spent over a year redesigning and renovating it to make it perfect. The 6,000 square foot home cost Camille over $3 million, but she called the move the chance to start afresh as a family after she was forced to leave the family home where her children had been brought up, and where she had lived for nineteen years. Camille these days is keeping things positive and encouraging her children to keep a positive attitude too. She has been working as an advocate for the Foundation for Women’s Cancer and recently announced that she had a great new relationship with an attorney called David, who also happens to be a big fan of The Real Housewives after she introduced him to the show.

With the Real Housewives of Beverly Hills now still as hugely popular as ever after seven seasons, it’s unlikely that Camille Grammer will fail to make to make regular guest appearances in the future, but as of now no-one but her knows if she will be returning for good, it’s a dilemma that she’s been pondering for at least three years now, and she’s still yet to make a final decision.