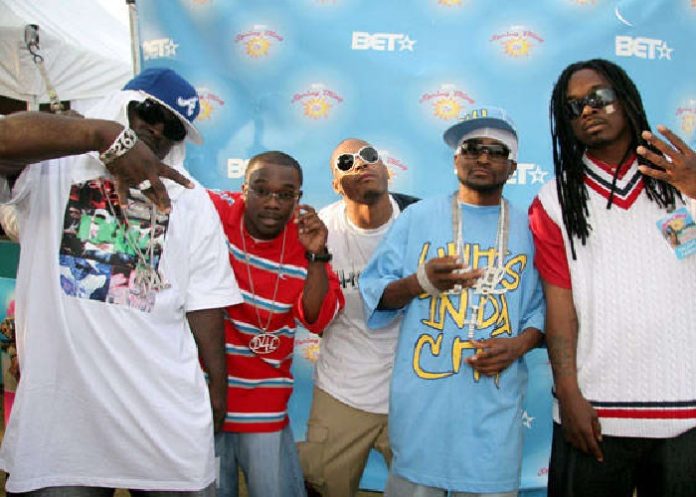 The rise of hip hop has seen many new sub genres and styles born as artists seek to infuse their music with their own distinct and exclusive sound, and in Atlanta in the first years of the new millennium a style emerged that seemed to expand hip-hop into the mainstream club scene far more than ever before, that style was snap music.

Snap Music, also known as snap rap or ringtone rap, was derived from the crunk style of hip hop, a more up tempo and club oriented sub genre that had become popular in the 1990’s, but snap music achieved mainstream popularity and seemed set the change the face of hip-hop forever, and the group that was almost universally credited with it’s rise in popularity was the Atlanta based foursome D4L, comprising of Fabo, Mook-B, Stoney and Shawty Lo, but what happened to snap music, and what are D4L doing now in 2018? Read on to find out.

D4L, which stands for Down for Life was founded by Shawty Lo in 2003. Shawty, real name Carlos Walker was the drive and motivation for the group, he funded it himself during the early days and launched his own indie record label ‘D4L Records’ at about the same time. He had met Fabo and Mook-B through his sister and they were soon joined by Stoney and began working on their debut album, ‘Down For Life’

The snap music style gelled and became more concentrated during this time, other groups suck as The Franchise Boyz were also in the scene but with the release of ‘Down For Life’ D4L became known as the Godfathers of snap. The album was released in November 2005 in association with Asylum Records and the independent label Dee Money Entertainment. The single ‘Laffy Taffy’ was released and quickly gained plenty of positive attention from critics and hip-hop fans alike.

Immediately the group embarked on a tour, they performed throughout the mid west United States and worked alongside several up and coming hip hop artists of the time, including the duo Midwest Connect, comprising of Koo-Laid and Neno Blakc. The popularity of D4L continued to grow and they became a regular topic of discussion within the hip-hop scene, but their success wasn’t limited to that genre alone, Laffy Taffy was achieving far more mainstream commercial success than any of them had expected. The single continued to sell well, particularly online where it had significant sales for several months after its release, and by January 2016 it managed to top the charts, achieving first place on the Billboard Hot 100. The single was popular Worldwide, and achieved top 30 placings in the UK and other European countries, it eventually was certified as triple platinum in sales, or three million units sold, and D4L were credited with the sudden explosion in the popularity of Snap music, but other artists weren’t taking to the new stars of hip-hop quite as well.

As 2006 continued D4L released a second single from the album, Betcha Can’t Do It Like Me’, which was a big hit in clubs and did well commercially, although not as well as the triple platinum selling Laffy Taffy. The Down For Life Album had achieved sales of half a million and been certified gold with a third place on the US Rap charts. D4L seemed set to continue their instant incredible success in the future but 2006 brought with it hip-hop rivalries, criticism from other artists and controversy over who had actually written ‘Laffy Taffy’ in the first place. In March 2006 former Wu-Tang Clan member Ghostface Killah released his fifth album ‘Fishscale’, and he took the opportunity to criticise D4L in the track ‘The Champ’, with the lyric ‘Y’all stuck on Laffy Taffy, wondering how’d y’all niggas get past me?’. Ghostface Killah had mocked the popularity of Snap music and the ‘Snap Dance’ the previous year upon the release of ‘Down For Life’ and there was even more criticism when fellow rapper Liam ‘Smack Eyes’ Thomas made the claim that D4L had stolen the lyrics to the track from his rhyme book.

The strangest fact about ‘Laffy Taffy’ is that Shawty Lo and Fabo had initially hated the song. Shawty hadn’t wanted to include it on the album at all and only the influence of Asylum Records had led to it’s inclusion. The success of the track took everyone by surprise, and although Fabo later remarked that he grew to enjoy performing it on tour, the group didn’t completely believe it was so successful until they made it to New York and LA, where the respect they got from DJ’s convinced them it wasn’t just a joke. The Single has been the subject of much criticism since its release, HipHop365 called it the worst hip hop song of all time and Bennett the Sage, of media Production company Channel Awesome called it the worst track to ever top the Billboard Hot 100, but you can’t argue with the immense popularity of a triple platinum selling single, and not only that but the tune set a World record. In 2007 Laffy Taffy made the Guinness Book of World Records as the most downloaded song in the history of music at the time, an accomplishment that easily over shadows the negativity of any critic, and the legacy of D4L to hip hop cannot be overstated.

The Influence of their music and the effect it has had on hip-hop since has been recognized and acknowledged by artists such as 50 Cent, Young Thug and T.I., who once was involved in a much-hyped feud with Shawty Lo, although they both insisted that the media was exaggerating the whole thing and there was no ‘beef’ between them. But what happened to D4L and why didn’t they capitalize on the success of their first album? In an interview in 2016 Fabo explained that the sudden success of the album, and the financial rewards had been completely unexpected by all the members of D4L, they had all embarked on solo projects and never quite found the time to get together to record as D4L again.

What Happened to D4L After Their Successful Debut Album

Fabo had become ‘2$ Fabo’, a name change resulting from an inside joke that despite my best efforts I haven’t been able to uncover, and after a brief hiatus from the music scene he returned in 2013 with the track ‘Catch Me on That Molly’, assisted by the production skills of King Dominus. He followed that up with ‘We Amongst U’ the following year, a well-received track that Stereogum awarded with their mix tape of the Week award, as well as describing it as ‘One hell of a good time’. The New York Music magazine Fader also heaped praise upon Fabo, describing ‘We Amongst U’ as nothing short of ecstatic and describing Fabo himself as a living legend to certain sections of the hip hop community.

Shawty Lo, arguably the most driven and ambitious of D4L probably became the best known former member of the group after they had ceased working together. He embarked on a solo career and in December 2007 released ‘Dey Know’, his solo debut single. The track achieved a top 40 placing in the Billboard Hot 100 and his first solo album ‘Units in the City’ was released in February 2008. The album saw guest appearances from not only his former D4L crew, but also artists such as Gucci Mane and others. ‘Units in the City’ reached 14 on the US Billboard 200 chart as well as a second place on the Rap Albums Chart and two other singles ‘Dunn Dunn and the ‘Foolish’ remix were spawned from it. In 2008 Shawty Lo began working on a second solo album ‘Carlos’, featuring a wealth of top hip-hop artists, including heavyweights such as Rick Ross, T-Pain, Lil Wayne and Gucci Mane and he began releasing singles from the album in late 2008. First came ‘Supplier’ followed in early 2009 by ‘Roll the Dice’, the track that officially marked the end of his much-hyped and somewhat exaggerated feud with T.I. In 2011 Shawty Lo’s hard-working ambition finally paid off in a deal with 50 Cent’s label ‘G-Unit South’. Shawty signed his D4L Record label to a distribution deal with G-Unit South for a reported $10 million, and the future looked bright for Shawty Lo.

In an Interview in 2015 Fabo spoke about the sudden and unexpected popularity of Snap Music and how the sudden surge of success had led the members of D4L to go their own ways. He explained that he, MooK-B, Stoney and Shawty Lo all remained on good terms, but saved his biggest praise for Shawty Lo, once again describing him as the man who had not only funded D4L in the early days, but who had also been the biggest driving force behind the group, the one who had actually pushed them to the fame and fortune that ‘Down For Life’ and ‘Laffy Taffy’ had brought them. Earlier in 2015 Shawty Lo had signed a new deal for D4L Records with Grown Money Entertainment and had released his latest mix tape ‘King of Bankhead’ in February of that year. The success of D4L had made Shawty Lo a much respected artist and producer in the hip-hop scene, but in the midst of his success, tragedy struck in September 2016 in Fulton County, Georgia.

Shawty Lo was driving through Fulton County at 2.20 am on September 21st 2016 when his car swerved off the road, hit a guardrail and smashed into trees before catching on fire. Shawty Lo was thrown from the vehicle and pronounced dead at the scene shortly afterwards. Fabo led the tributes, he described the influence that Shawty Lo had had on Hip-hop and the legacy that he would leave behind. Many mainstream artists also paid tribute to Shawty Lo, including Beyonce who was touring his home city Atlanta at the time of his death, and hip hop artists such as T.I., Young Thug, Ludacris and DJ Khaled all praised the life and work of Shawty Lo before his sudden and premature death at the age of just 40.

Fabo, now known as 2$ Fabo continues to perform as a solo artist and in recent years has not only performed for fans, but he’s also performed at military bases for serving military personnel in Iraq, Japan and Germany. Stoney has kept a low profile since the D4L days, but still catches up with Fabo and Mook-B for the occasional BBQ or card game, and as for Mook-B, he’s still promoting Hip-hop music and new styles at the internet radio station ‘Nuradio Station’, based in the place where it all started, Atlanta Georgia, which thanks to D4L, will always be known as the home of Snap Music.