Flex Watches after The Profit – 2018 Update

Flex Watches Before The Profit

In 2010, Trevor Jones and Travis Linsky started Flex Watches in Los Angeles California. It was more than just a business. Each color watch represents a different charity. They attend colors in all. Even though the watch market is crowded, Flex Watches was able to stand out. In the third year, Flex Watches was able to hit $1 million in revenue. They even had an idea for interchangeable watch faces, which allowed for an upsell opportunity. Unfortunately, their new style watches was not a hit with their customers. As Marcus Lemonis put it, the revenue was in free fall. He was willing to help out.

Flex Watches on The Profit 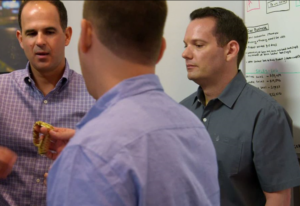 Marcus told the audience that he was looking for an accessories business to build his off his fashion brands. He decided to go with the one that had a social mission. He felt like this was the best way to both make a profit and make a difference. He made his way into the Flex Watches office. It was nicely decorated but very small. Travis showed Marcus their old inventory of watches where the face popped out of the band and the customer was able to change the band as they like. The price point was $35 which Marcus said was a great watch at a great price. He declared it to be comfortable, and durable. Matt explains that they decided to distinguish themselves by donating a portion of the proceeds to charity. The idea really hit it off.

Marcus asked if that watch was still in production, but Travis explained that the interchangeable face watch was simply the first generation. They introduced a new sports watch that cost over $100. Marcus told them that when he looked at a watch he was looking for something inexpensive, and the common consumer was too. When Marcus asked why they change their model, Travis told him that retail stores demanded that the watches be over a hundred dollars. Retailers felt that they weren’t getting a high enough margin to justify purchasing the first-generation watch at $15 and selling it for $35.

Despite accommodating the stores, Flex Watches ended up losing out on the deal. The new versions of the watches weren’t selling and their profits were going down. Next, Travis showed Marcus the third-generation watch. It was available in stainless steel, gunmetal, gold plate, and rose gold. This one retailed at $65 per watch. You could see that Marcus was questioning that decision. When Marcus inquired where the charity angle was with the two new generations, Matt explains that many consumers didn’t realize that that was still a part of their business. Marcus cringed and told them that they’d gone off brand.

Marcus delved deeper into the financials and the ownership of the business. He discovered that Trevor and Travis each own 41% and that they had another investor. Trevor told him that he was the designer and marketer of the two, while Travis handles manufacturing and sourcing the materials. Travis told and they tried to do everything as fast and cheap as possible and Marcus let them know that it showed in the product. In their first two years, flex watches double their revenue and almost got $2 million, but drop back down when they change their product. Sales dropped 50%. Last year, they only made $300,000 in revenue and ended up losing $75,000 by the end of the fourth quarter.

The downtrend business owners let Marcus know that they’d funded their loss through personal means like credit cards and reverse mortgages. Marcus knew that the majority of their problems stemmed from going away from their original vision. You could tell that he was going to make going back to the multi-colored charity watches a provision of the deal. Travis said that he moved away from Flex Watches being a purpose brand to a cool and beachy brand. He wanted people to know that it was a cool watch instead of emphasizing that it would feed hungry children in need.

Marcus, Travis, and Trevor went to go view the flex watches warehouse. Trevor explained that he just walked into the warehouse one day, decided he liked the building and the people and made a deal for that to be their warehouse. Marcus said that that sounded a little too much like speed dating for him. He wanted them to do more due diligence. The same thing happened with the boxes. They chose a thing at random to save time. Marcus let them know that that showed in the finished product. He explains that the packaging was even more important than the watch itself when it came to point-of-purchase at the store. Marcus asked if anything about the watch was patented, and the store owner shook their heads. Marcus let them know that they did nothing to distinguish themselves.

Marcus informed the owners that had he not known the story behind the brand he would not have come out there at all. The fact that the watch faces were interchangeable and brightly colored, and that they contributed to charity was their entire differentiating appeal. Marcus explains that their social media should reflect the brand as well as the specific charities that they donate to. Currently, it was mostly dedicated to Trevor’s idea of the watches consumer – a surfer. Trevor and Travis. You would Trevor who is wanting to distant distance himself from the original brand story because it reminded him of his dead mother and Travis who is trying to get everything done as fast and cheap as possible. The only thing that that got you, as Marcus explained, was gold watches and shit boxes.

As they were going through the financials, Marcus asked Trevor and Travis what they felt the business was worth. Trevor came up with a two million-dollar valuation, which was crazy for a business that had gone from making almost $1 million down to $300,000. Marcus offered them $400,000 in exchange for 40% of the business. The money would go towards paying off their liabilities, as well as setting aside $100,000 for cash flow, with a concentration on promoting the brand through social media. Travis seemed upset at the valuation, but Marcus insisted that he was facing reality. And they decided to take the deal, and Marcus explained that he would be 100% in charge. The owners would each have only a 21% stake in the business.

Marcus held a meeting with the employees, and explain that they are going to go back to the generation one watch so that they had something proprietary and unique. They met up with Karlo at Sheik shoes. The store had already been selling Flex Watches. This was actually the store that had asked them to get a higher price point. It ended up not selling as well. Marcus suggested that instead of jumping into a different watch with a higher price point, they could spend the money making a display that would sell the watch itself. The salesperson wouldn’t have to spend the time selling the watch. The freestanding display would incur a one time cost of $300, and then they would net a profit of $500 for each display they had in a retail store.

Marcus gave the owners the task of putting together a vision board for Flex Watches together. They fought and were unable to come up with a cohesive idea. When Marcus arranged a meeting for Travis and Trevor with a marketing agency, the agency could see the lack of vision right away. One marketer declared that the board looked as if it was advertising a travel agency. Marcus let the owners, especially Trever know that the charity angle would get them back to being a brand that mattered. Marcus then brought in a social media marketer to help them make the website that really sold the story of the charities, and the watch itself.

Overall, Marcus aided Flex Watches in going back to their original brand vision, creating a website and a social media campaign that told their story, and added more features to the watches themselves. The owners really had a breakthrough in vision and certainty about the brand. They were able to make a successful pitch to the Flip Flop Shop, based solely on the story. They were not sold on selling watches, but the charity aspect took them over the edge. 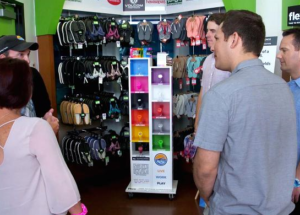 Flex Watches has come a long way since they appeared on The Profit. The website is now live, and it looks amazing. The watches are available for $35 each on that website, as well as Amazon.com.  They have had partnerships with celebrities like Daymond John of Shark Tank, and the rapper Tyga, which only helped to increase their bottom line. IN late August of 2017, Flex Watches ran a Labor Day weekend to aid the victims of Hurricane Harvey, a natural disaster that heavily hit areas of Texas and Lousiana. 100% of the proceeds from that sale went to the victims.

Flex Watches joined forces with Marcus in the ML Creative Group, and they have taken control of all of the digital marketing and e-commerce for Marcus’ creative businesses. Flex also partnered with Inkkas, another of The Profit’s investments to create a new style of shoe that is sold on the Flex Watches website. As of October 2016, the deal that Flex made with the Flip Flip Shop went through, and Flex Watches are being sold at their locations across the country.