Grafton Furniture Update – What Happened After The Profit

Grafton Furniture Before The Profit

Three generations ago, the Grafton family started Grafton Furniture in Miami, Florida. It was started in 1964 when Cuban immigrant Estaban Grafton came to America and went into the furniture business. He began to make resident and commercial deals, and the business thrived through the years and was able to be passed down to Esteban’s son, Steve. Steve and his wife own Grafton furniture at a 50/50 split, and their son Stevan is their employee. When the crash of 2009 happened, the company began to lose money like many other American businesses. Debt and pushing off updating the facility was the only way they could keep afloat, and Marcus was willing to help.

Grafton Furniture on The Profit 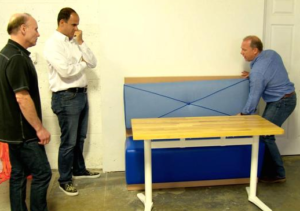 Marcus Lemonis went to check out the Grafton Furniture storefront, and he liked what he saw. He introduced himself to the current owner, Steve Sr, and complimented him on a job well done. Steve Sr explained that he just recently assembled the current showroom with merchandise they’d had for years, in hopes of attracting interior designers. Nothing in the showroom was actually for sale, which Marcus pointed out was more than a little silly.

Next, Marcus went into the warehouse to meet Estaban, the original owner of the business, and Stevie, who would inherit Grafton Furniture one day. He discovered that the facility had over 20 employees who did a large portion of the manufacturing of the furniture, while Steve Sr did the design work. Steve Sr’s wife, Mary Grafton, owned 50% of the business as well.

Marcus discovered that they were using inefficient, older equipment that was significantly slowing down the process of crafting the furniture. He then learned that Steve Sr did not know what the margins were for the furniture he was making, and large amounts of their paperwork telling that was supposed to tell the employees where a project was in terms of development was incomplete. Jorge, a supervisor who handled shipments and deliveries, was also helping with payroll. The whole process, if you could call it that, was messy and complicated. As Marcus put it, there was “no logic to their workflow.”

The first thing that Marcus was looking to change is the margins, followed quickly by the process. Jorge and Steve did not keep communications open with Stevie, and Stevie was struggling to make it work despite the clear lack of delineation. Grafton Furniture was not only operating at a million dollar loss, their margins were 20% less than the industry standard. Marcus also informed them that the custom furniture business should operate with zero debt since they were not recession proof in the slightest.

Marcus met up with all three generations at dinner to discuss a deal. He told Steve Sr that he found him stubborn and unwilling to change, especially in regards to Stevie, his son. Stevie was often confused about what his role was, and his father was not receptive to any of his ideas. Marcus said that he was willing to put up $1.5 million in exchange for 45% of the business, full financial control. and full control on how Stevie’s role was to evolve. Marcus told the concerned-looking business owners that he also wanted to pay down the debt, give them working capital, and revamp the tired equipment. They ended up taking the deal, but Steve Sr looked very hesitant.

Marcus next met with the employees of the business to discuss the deal and announced his intentions to expand with a branded furniture line. He told the excited workers that he intended to help the generational business last forever despite the odds. Afterward, Marcus met with Steve Sr to discuss pre-made, branded furniture. He challenged him to design 4 different chairs that could be sold for under $500 at a 50% margin. Steve Sr stated that he was up to the challenge.

Marcus met with the family in the showroom and took a knife to a $1,700 chair to show them that Grafton Furniture’s quality was sub-par. Marcus asked Stevie if there was one thing in their showroom that he would feel comfortable delivering to a customer. Stevie said no, pointing out scratches, nicks, and uneven chair arms. When Marcus asked who was pushing the merchandise out before it was ready, Steve Sr readily admitted it. He asserted that good customers would demand rush orders, and Steve Sr would accept those orders even if it meant an inferior product.

Marcus informed Steve Sr that he would be putting Stevie fully in charge of quality control. Stevie would get yellow stickers that he would place on a product when he felt it was ready. Steve Sr warned his son that he would be getting pressure from not only the clients but other long time workers.

Marcus went to the warehouse and picked what he wanted to change. He noticed the upholstery fabric was everywhere, and the machinery was old, and he began to pick out what needed to go or be reorganized. While he was looking around, he noticed that Stevie and his father were having another disagreement regarding quality. He pulled the two aside to talk about it. Steve Sr insisted that he was getting better about quality and delivery dates, and Stevie denied that it was happening. Steve Sr said he would continue to work on getting better.

The warehouse got air conditioning, a new design center, and more. Marcus spent a third of the money already, but he thought it was worth it. He also got to see the chair that Steve was working on. Marcus sat in it and looked disappointed. He told Steve that it was not the design that he was shown initially, and that worried him for the future. The changes would cost time and money that Grafton Furniture simply did not have. Marcus and Steve Sr finished the changes to make it more like what was designed initially. Marcus was able to see it get cut and developed into a finished chair. After he had been away for awhile, Marcus walked

After he had been away for awhile, Marcus walked in on Steve Sr and Stevie having yet another fight about quality. Steve Sr argued that more items should have the yellow sticker on them, and Stevie insisted that those projects were not completed yet. Marcus pulled Steve Sr aside after apologizing to Stevie. He wanted to understand more about his habit of being overbearing and spoke a bit with Esteban. The founder agreed that Steve Sr needed to step back.

Marcus showed up three weeks later to see how things were progressing. He was pleased with what he saw. The warehouse and building, which Marcus spent over $700,000 on, was now beautiful and efficient. With that taken care of, Marcus brought the two younger generations of Steves to a national retailer to sell the branded lines. Marcus started off the meeting, and then Steve Sr took over with his photos of the “Quick Ship” program, which would be branded under “American Dream.” They were able to make a deal, and Grafton Furniture was invited to the Direct Buy business conference.

Marcus said that the most important part of this whole venture was pride, and he unveiled a gorgeous mural on the building that depicted the story of the three generational business. The family responded with tears and appreciation. Let’s see if they can continue to live up to that mural after Marcus is not around all the time.

Grafton Furniture Now in 2018 – The After ‘The Profit’ Update 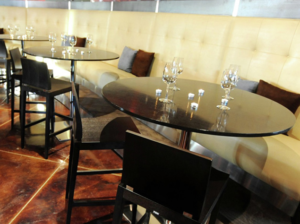 Unfortunately, this update begins with a bit of sad news. The original owner and founder Estaban Grafton died in the summer of 2015. The two Steves are left behind to run the business, and it looks like they are doing just fine. The older Steve was in promos for the American Dream line with the Vice President of Merchandising for Direct Buy. Their social media pages show lots of photos of Grafton Furniture in its new habitat, both their custom work and their American Dream ready to ship line.

In January of 2017, Marcus Lemonis divided his empire – within his own building, of course. He opened in the New Mart Building in NYC, which houses the corporate offices for the prestigious members of the ML Fashion Group such as Flex Watches, Printed Village, and Inkkas. The remaining owners of Grafton Furniture recently posted a photo of others in the group. They also showed that the offices are outfitted with the American Dream line from Grafton Furniture.