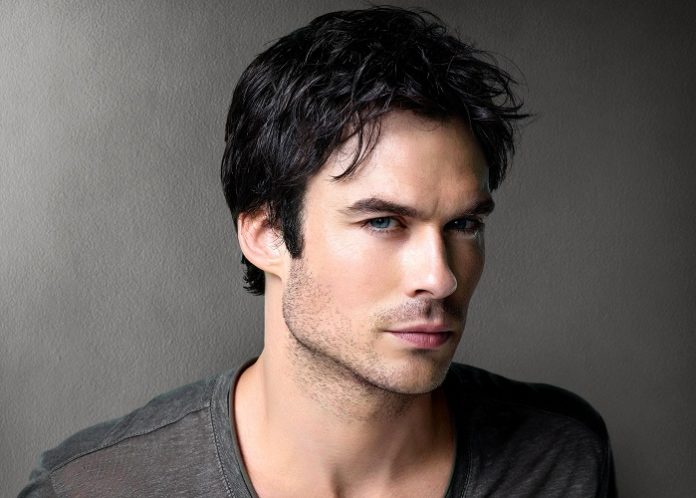 Ian Somerhalder, the actor, director and former model has recently celebrated the birth of his first child with fellow on-screen vampire Nikki Reed, and the ridiculously good-looking couple have recently emerged from a self imposed ‘Month of silence’ that they used to enjoy the first few weeks of their baby daughters life. The couple are clearly enjoying every moment of their new status as parents and with good reason. With the thrilling finale of The Vampire Diaries and the end of the series after eight incredibly successful seasons, Ian and Nikki have both become considerably more famous, as well as far wealthier than they were before.

Ian Somerhalder’s success on the screen has doubled his personal fortune in just a couple of years, and now he is in a position to cash in on his current fame and popularity like never before. His earnings from The Vampire Diaries have brought him financial sercurity for life, but exactly how much money does the man behind Damon Salvatore have now in 2018? Read on to find out.

How Did Ian Somerhalder Make His Money & Wealth?

Ian Joseph Somerhalder was born in Covington, Louisiana on December 8th, 1978. If like me you were unaware of exactly how old Ian currently was, then you’ll probably be surprised to find that he’s actually 38. Ian’s smouldering good looks have been able to open many doors in his career during his life, but they are complimented by his youthful enthusiasm and easy charm which effortlessly give the impression of a much younger man. His good looks also gave him an early career opportunity, from the age of 10 he began modelling, and worked with some of the biggesty names in fashion, such as Dolce & Gabbana, Calvin Klein and Gucci. During the next three years he travelled to Europe for his modelling work and, after finishing high school he had decided to pursue an acting career.

Over the next few years Ian Somerhalder got a few small parts in film and TV, but he first got a lucky break in 2000 when he landed a role in Young Americans, a spin-off from the hugely successful Dawson’s Creek. Young Americans was well-received, but it never gained anything like the popularity of Dawson’s Creek, which by then had passed it’s prime and was no longed as popular as it had once been. Ian won a part in the drama adaptation ‘The rules of Attraction’ in 2002, but he first become well-known in 2004 for his portrayal of Boone Carlyle in the long-running and hugely original NBC drama ‘Lost’.

Lost was almost a cultural phenomenon at the time. It had been hugely hyped and boasted a great production style with an original and unique storyline. The long drawn-out sequences, rich with flash-backs didn’t appeal to everyone, but the suspense and tension of Lost was threaded so tightly into the plot, that committed fans couldn’t bear to miss a moment. The character of Boone Carlyle was a major one on the show, but the turbulent storyline of Lost saw him also become the first major character to be killed off on the myserious island after only twenty episodes. The World of Lost was so rich in surreal time-shifts however that Ian returned to play Boone for another seven episodes, up to and including the spectacular grand finale in 2010, but by then his fame had won him another role, the one that he made his own.

Ian Somerhalder And The Vampire Diaries

In early 2009 Ian Somerhalder auditioned for a role in a new upcoming series, ‘The Vampire Diaries’ based on LJ Smith’s popular book series of the same name. The character of Damon Salvatore called for someone ‘Darkly handsome’ but also someone who could portray ‘strong, charming and smug’ in equal measure. Damon was a character who could switch from playful to extremely malevolent in a second and Ian Somerhalder fit the bill perfectly. Originally producers were looking for an actor in his early to mid twenties to play the part, but the eternally youthful Ian, then aged 32 was perfect. Ian didn’t read The Vampire Diaries books until filming had begun, but he instantly created the iconic character of Damon Salvatore with his menacing and believable sense of evil, yet we all knew there was good inside.

Originally, in season one, Damon was the evil vampire, the black sheep of the vampire family if you will. He was the biggest villain in Mystic Falls but it wasn’t long before the cracks in his tough vampire façade began to show. The development of Damon Salvatore from the selfish and manipulative anti-hero into the caring and deep character he became was perfectly portrayed by Ian Somerhalder. Ian and his two co-stars, Nina Dobrev and Paul Wesley had a great on-screen chemistry and the shows phenomenal success and popularity with viewers was generally credited with being as much down to their committed performances as the thrilling storyline of the show.

The Pilot episode of The Vampire Diaries won the largest number of viewers for The CW Network ever, and the first season attracted over 3.5 million regular viewers, another record for the network at the time. Ian and his two main co-stars all benefited greatly from the popularity of the show. Ian was paid $40,000 per episode by the final few seasons. Paul Wesley who played the part of Damon Salvatore’s on-screen brother, Stefen, and Nina Dobrev, who played Elena Gilbert both earned around $30,000 per episode in comparison.

After eight seasons and 171 episodes, The Vampire Diaries has made all of it’s stars considerably more wealthy than they were before. Ian Somerhalder’s personal worth now in 2018 is $8 Million, double the $4 million his personal wealth was just two or three years ago. With The Vampire Diaries, at least in it’s current reality, being gone from our screens for good, Ian Somerhalder has never been more marketable as a star, and his future looks to be as fresh and assured as the man himself always seems to be.

I can’t help occasionally considering if Ian Somerhalder and his fellow on-screen vampires could really be undead creatures of the night, they do fit all the stereotypes. They’re eternally youthful, always confident and they never fail to look great, all of them, all the time. Ian and his equally fantastic looking and eternally youthful co-star Nina Dobrev dated from 2010 to 2013, but their real life relationship never developed as well as their on-screen one. Their off-screen relationship floundered and by 2014 Ian had begun dating yet another on-screen vampire, but this time one from a far bigger screen. He and actress Nikki Reed, famous to millions as the vampire Rosalie Hale from the Twilight series, became engaged in early 2015 and married in April of that year in Malibu, California. In May this year they publicly announced they were expecting their first child, and daughter Bodhi Soleli was born on July 25th 2017. The happy new parents have recently emerged from their self-imposed month of seclusion and are clearly loving every moment with their new daughter.

Where Does Ian Somerhalder Live?

Ian and Nikki bought a trendy modern and glass-walled home in Venice, California in September 2015 for $2.9 Million. The uniquely designed and ecologically friendly home has three bedrooms, four bathrooms and 3,000 square feet of luxurious and expansive space. The home features polished floors and interconnected loft-like living spaces, and even a 25 foot bridge to connect the dining quarters to the master bedroom, which also features its own lift and a private balcony.

What Car Does Ian Somerhalder Drive?

Any remaining doubts I had concerning Ian’s real life vampire status have been swept aside by his considerable and commendable work with charities and good causes. A committed and ardent supporter of animal and environmental causes, he was involved in the cleanup of the Deepwater Horizon disaster in 2010 where he assisted in the cleaning of wildlife covered in oil, and helped promote the environmental effects of the incident. He supports the St Tammany Humane Society, an animal welfare and shelter organization, and The Vampire Diaries fanbase agree with the cause completely. In 2010 the fanclub of the show presented Ian with an $11,000 check for the charity as a birthday present.

Ian founded the Ian Somerhalden Foundation in order to educate people on environmental issues and the protection of animals. He supports non-GMO initiatives and promotes ecologically friendly farming. He has promoted and supported the work of ecologists and reverse climate change celebrities such as the ecologist Allan Savory for many years. Ian Somerhalder has still found time amongst all of that to support anti-suicide and youth charities both actively and through fund raising events.

Ian Somerhalder has become hugely popular through the success of The Vampire Diaries, and his award cabinet has gained quite a bit of weight since the show began, with a large percentage of his nominations and awards coming from the Teen Choice Awards. His first award came before he was famous when, back in 2002, he won the Exciting New Face award at the Young Hollywood Awards. He won the Screen Actors Guild Award with the cast of Lost in 2006, and in 2010 he won the Choice TV Villain at the Teen Choice Awards (TCW) for his role in The Vampire Diaries. The character of Damon Salvatore was showing that ever growing soft side the following year however, as TCW this time awarded him the Choice Male Hottie award, as well as a second award for Choice TV Sci-Fi/Fantasy Actor. Since then he’s been the Choice Male Hottie at the TCW a few more times, but he’s won the Choice TV Sci-Fi/Fantasy actor award every year since. It’s fair to say that Ian Somerhalder is a firm favorite with fans of the Teen Choice Awards, and he’s won several awards at the People’s choice Awards too, most recently the Sci-fi/Fantasy TV Actor award in 2015.

As for my faint but lingering suspicions that Ian Somerhalder may be a real-life vampire, we’ll just have to wait and see if he ever does begin to shows signs of his advancing years, but I’m not taking any chances, I won’t be removing my garlic necklace until I see the first wrinkle on that otherwise perfect face.