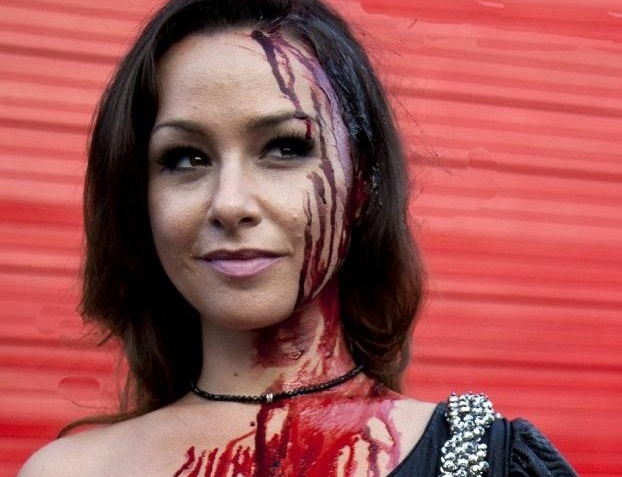 Seems I’ve completely run out of main cast members to look at in this series on Roseanne, but there are plenty of other folk well worth looking into. Today I will be finding out everything I can about Danielle Harris, who played the recurring role of Molly Tilden on season 5 of the show. Unlike everyone else I have looked at, the vast majority of Danielle’s wealth does not come from Roseanne. Instead she has had a long and storied career, showing up all over the place, and even carving out a very fine niche in the horror genre. More recently she has expanded into directing and writing, and looks set to grow her already impressive fortune even more.

So let’s take a long look at Danielle Harris’ career, see where she came from, where she made her money and where she might be going in the future.

How Did Danielle Harris Make Her Money & Wealth?

Danielle Harris was born on June 1st 1977 in Plainview New York, but grew up in Florida. She got an early start in her acting career, winning a beauty pageant during her elementary school days that gave her a trip to New York for ten days. While there she was inundated with modeling offers, but could not pursue any of them, due to them being so far away normally. Her mother uprooted the family not long after, being transferred back to New York, and Danielle started appearing in commercials.

A child star, Danielle Harris’ first major TV show was One Life to Live on ABC. She appeared on the show for three seasons, and moved onto Spenser for Hire. This early exposure allowed her to start auditioning for film work, and in 1988 she appeared in her first horror flick, Halloween 4. This would not be her first horror film, or even her last appearance in a Halloween film. She reprised the role the following year, in Halloween 5, but that film was not as well received as the 4th. Moving into the nineties she continued to appear in film, along with a few guest spots on TV shows, including Eerie Indiana where she played a character who recently relieved a heart transplant, then began acting like the original owner. I bring that up only because it feels so familiar to me, I may have seen that one.

The early nineties saw Danielle appearing in Roseanne. She was only on the show for a year, but Roseanne Barr took a liking to the young actor, and had her play her daughter in The Woman Who Loved Elvis. Her career slowed in the mid to late nineties, and she moved into VA work. She portrayed Debbie Thornberrys, sister to series protagonist Eliza, and appeared in every episode, and a few sin off flicks.

The mid 2000s saw her return to the genre that made her famous, Horror, where she played the lead in Rob Zombies Halloween reboot. Zombie was initial reticent about casting any actors from the previous iteration of the franchise, but changed his mind after seeing her audition. She described the experience as surreal, in an interview she discussed the nude scene, and the fact that despite knowing that it was a film, all acting, the feeling of helplessness, and the fear that she experienced was very nearly too much for her. The film was a monumental success, the highest grossing Halloween flick, and spawned several sequels. The performance cemented her as this generations Scream Queen, and since 2007 she has appeared in a wide variety of slasher and general horror movies.

In 2012 she made her horror directorial debut with Among Friends, which was well received. Her career right now is booming, with numerous credits this year, and two more before the end of next. The vast majority of her money comes from acting these days, with pay days in the genre ranging from $100,000 to $500,000 per flick, so it is no surprise that she is sitting pretty at $10 million. It is very seldom that actors recover from a lull in their career, and it looked for a while there that Danielle Harris would fade into obscurity, but the success of the Halloween remake propelled her back into the limelight in a big way. She is quoted saying that ” It’s ironic that the same movie that started my career reinvented it again.”

She is. Danielle Harris married David Gross in 2014. Little information on her spouse is up online, save for the fact that the couple had a kid recently. She gave birth to their son Carter Davis Gross, in February of 2017. She has stated that due to his birth she was stepping back from acting, taking on more directorial work and raising her son.

Where is Danielle Harris from?

She was born in New York, but grew up in Florida.

She was, yeah. Back in the mid nineties she had a stalker, obsessed fan Christopher Small. He was hooked on her character on Roseanne, and was arrested trying to bring a teddy bear and shotgun to her home. She had to get another restraining order against the guy in 2009, when he started sending threatening tweets to her.

Why wasn’t she in Halloween: The Curse of Michael Myers?

She was in talks with the producers when the film was in pre production to reprise the role of Jamie Lloyd. They could not come to terms, due to the fact that her character was set to die quite early into the film, and the money offered was sub par. It was recast instead. Proved to be a lucky thing, as when the series was remade she was cast as the lead, giving her her current career.

Why is Danielle Harris Afraid of fish?

I have no idea. I looked into this, and she talked about that fear in an interview a number of years back. She thinks her fear of stage performance, with watching judging eyes, comes from the same root, so maybe it’s the fact that when you look at a freshly caught fish, gasping it last few minutes of life, it’s eyes staring blank at you… Never mind, I think I get it.