Murchison-Hume Update – What Happened After The Profit

Max Carter founded an all-natural, non-toxic cleaning product company in California called Murchison-Hume. She used to be a fashion editor that was living in Australia but all of that changed when her son became allergic to regular cleaning products. So she decided to make a product without harsh chemicals that her son could use. The product ended up catching on in Australia, and she gained almost $1 million in sales she decided it was time to move her business to the United States.

Her entire family moved to Los Angeles. The product does not have quite the same effect in the United States. They start to quickly lose money. Their price points were high, and it was not was the typical US consumer was looking for in a mass-marketed cleaning product. The business was currently struggling and had many bills that were passed to. Marcus was willing to help because cleaning products were such a big industry. With his puns and his work ethic, Marcus went to visit Murchison-Hume in Los Angeles. 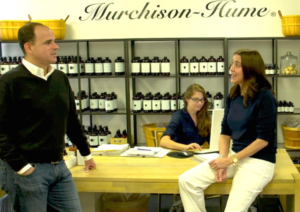 Marcus was in introduced to a few employees, as well as Peter the co-owner. Max also came out to meet Marcus and introduced him to the two office dogs that she called her fur babies. Marcus asked if the dogs were always this peaceful and if they took after their owner. Max laughed and said while they were always calm, she didn’t share their disposition. In an aside to the camera, Marcus gave his impression of the office. He said like he was in the wrong place because he saw fine China and mood boards and other fancy things. He thought he was in a cleaning products office and the LA spot did not give that vibe.

Max sat down on her desk and started to explain the back story for Murchinson-Hume. She let Marcus know that the business was started in 2008 when she was living in Sydney Australia with her husband and her son. Her son was born with asthma, eczema, and allergies. His problems got worse whenever she cleaned the house. So Max decided to make her own non-toxic plant-based cleaning products. While this was not a cure to her son’s illnesses, and definitely helped on a day-to-day basis. Max told Marcus that Murchison-Hume was inspired by her father-in-law, who was an elegant man. He asked her if the name caught on in the United States, and Max admitted that she was getting some resistance to it it seemed a little pretentious.

In an aside to the camera, Marcus said that product names should be something that was easy to remember and say. Gravitas was less important in a toilet cleaner than it was in a law firm. Marcus said that he liked that it smelled like an essential oil instead of a harsh cleaning product. Max showed him a sneaker spray that she really liked. Marcus asked her if she was selling it at shoe stores, and she giggled and said that she tried. She did not seem to understand the gravity of her situation for someone who was interested in gravitas.

Marcus told Max that he was confused about who the company was trying to be. They had cleaning products,  as well as candles,  garment cleaner,  and a shoe spray,  which did not communicate a clear brand message. Marcus expected Murchison-Hume to have a few categories,  but with a few SKUs in each of them.  They only had single products in different categories, which showed a lack of direction.  Marcus then inquired about the price points.  Max told him that the spray cleaners were $9. Marcus was appalled.  He told her that it was almost double as expensive as it should be unless the person was coming to the house to clean the toilet for them.
To get an idea of where she was getting her price point, Marcus asked Max where she made the cleaners.  Mix informed him that they had a third party logistics company involved – it was made in one city,  then shipped to Dallas Texas.  Marcus told that it was wildly inefficient, and showed them that it was hiking up their price point as well.  The total cost of the ingredients and the packaging was $1.29. Having the product made in Chicago,  then transported to Dallas to go to customers was adding cost,  and losing them customers.  You could tell it was one of the first things that Marcus would change. The process added $1 of cost to each unit,  and that added up quickly.
Max had framed photos of the different identifying icons that she used for her products.  Marcus let her know that those icons were more appropriate for a fashion designer than a cleaning company.  He called it a barrier or entry for normal customers – it was hard to identify with. Marcus so one with the art director,  who told him it was a constant fight to get things approved by Max.  She wanted things to look more classy than they were.  Marcus discovered that they owned the trademark for the name  Best in Show for pet products,  which he saw as valuable to his other investments in pet products.
Marcus when with Max to go over her finances for the company.  He discovered that Murchison-Hume lost $477,000  the prior year due to mounting expenses.  Max had hired a CEO because she didn’t feel qualified herself.  She told Marcus that one of her plans was to start a fulfillment center in the basement of the office plaza.  None of the other employees seemed super psyched about it. As Marcus was telling her how bad an idea it was when Max offered him a cup of tea.  Marcus looked at her like she was crazy.  As Marcus put it,  it was a bad idea to move the cleaning products from coast to coast when they currently had a central location that handled the distribution.
Marcus cornered Max in the office and asked why she was still keeping up the appearance of making things work when everything was going to pieces. Murchison-Hume should’ve been closed months ago, and Max realized that. But she told Marcus that she had to make it work for her family. She’d moved everyone out to a tiny house on a highway in LA when they had a beautiful house in Australia.
Max informed Marcus that she formed Murchison-Hume in part to make everyday domestic tasks feel like a treat. Marcus asked how much she needed, and Max said that she wanted a million dollars to turn it into a personal care business. Marcus countered with $250,000 for 50% equity because it was such an investment risk. Max started to cry, and she tried for $500,000 in exchange for 30%. It was quite a standoff, but they ended up settling on $250,000 for 30%, and Marcus would get 70% of the Best in Show pet product trademark. They shook on it, and Max looked really happy for the first time.
Now it was time to get down to work. Marcus wanted to change the branding, and give Max all the resources to run the company herself. Marcus went to the Container Store with Max, where her products were being sold. It came to light that she had called the store in advance to move her product. Marcus was not happy. As he explained, he can’t really help if he’s not getting a clear picture. He saw the real planogram and discovered it was not in a great place because it was not selling.
He worked on the labeling with the art director. He decided that the name would be Clean Evolution, with a clearer icon that represents what it’s for. Max threw a fit and left. Marcus called her, and she expressed that she felt like she was under pressure. She got a little hysterical, and they decided to meet up later. Max brought in Kathy Ireland to help out with new branding. She ignored all of the designing that Taylor did, and she tried to work in the name Murchinson-Hume. Neither Kathy nor Marcus looked impressed. Kathy attempted to convince Max that she was capable of running the business. It wasn’t clear if the message to drop the facade really got through to her.
Ultimately, Marcus saved them money by moving the manufacturing and distribution centers to Chicago, where he could keep an eye on it. The inventory was completely off – by $230,000. Instead of getting out of the deal right then and there, Marcus gave her a week to figure it out. At the end of the week, she still did not have an idea of where the inventory went. Max was flippant about it and did not even look remorseful. Marcus wished her luck and walked away from the deal.

Murchison-Hume Now in 2018 – The After ‘The Profit’ Update 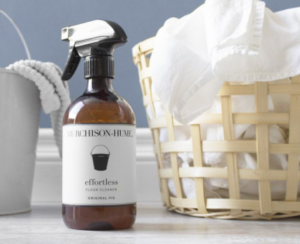 Even though Marcus walked away from the deal, he advertised on Twitter that he owned the Best in Show label. Presumably, this is to make up for the work that he put into Murchison-Hume that he would no longer make up in equity. The business continues to function under their old name and labeling. The products sell on Amazon for crazy prices – their Spit and Polish Stainless Steel Cleaner was almost S20 for a 17-ounce bottle. The products have ratings ranging from 3.5 to four stars. In my opinion, that’s not a good enough rating to warrant paying $20 for something that I could buy at the dollar store. Even so, Murchinson-Hume products have been featured in many fancy magazines such as Marie Clarie, Vogue, and House & Garden.