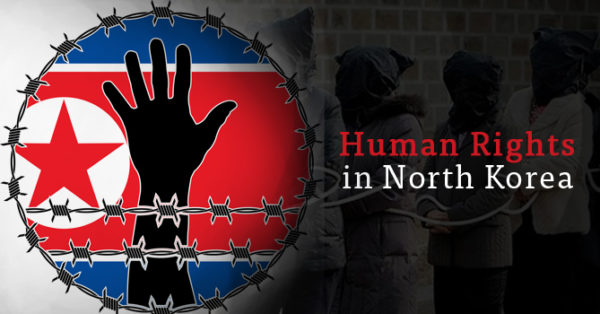 To those outside the Hermit State, conditions inside of it can be confusing. Stark poverty and starvation for most of the population, but for the government favorites, feasts are held daily. Criminals are not just punished, but so are generations of their descendants until they have learned to “love” their country. It does not help that for any visitors, the censorship and chaperoning are so intense that it’s less a journey through the country but more a simulated trip through what the “ideal” is. Under all of this confusion and secrecy are some dark conditions, and even darker stories. Here, we take a look at 10 of the worst human rights violations done by the North Korean government. 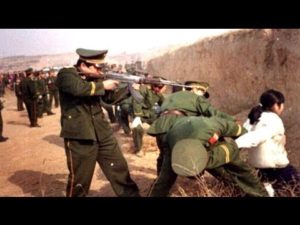 While common around the world and rather “tame” as far as human rights violations go, public executions are taken to a whole new level within North Korea. While most countries try to keep public executions about 100 years in the past and saved it for murders, rapes and the like, North Korea keeps things fresh with public executions happening rather often, with at least one being performed in front of a stadium with a grand total of 150,000 onlookers (who were forced to be there). You may be wondering what sort of crime could possibly warrant this. Well, it’s owning a few phones and calling outside of the country within your own factory. Other executions happened due to handling out papers from South Korea, and as a show of power of the then new leader Kim Jong-Un by execution of a top official using an anti-air gun. This may be the first and only recorded incident of North Korean ordinance larger than a bullet actually reaching its target. 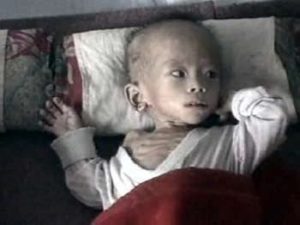 As it turns out, being pregnant in a total dictatorship is way more dangerous than in most other places around the world. This is especially true if you are not a member of the elite, loyal class of Pyongyang. This practice is particularly common in prison camps, where pregnancy on the whole is a huge risk to life as starvation and getting mauled is common even for the healthiest of prisoners. This punishment and massive violation of human rights is usually used as a punishment for escape attempts of anyone within the family of the prisoner in question. This is compounded by the fact that rape is incredibly common in these prison camps by the very guards who often then force such events to occur. 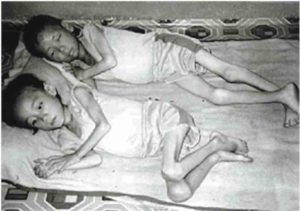 Hunger is a major problem across the world, there’s no real breaking news there. Sadly, many people who do not deserve any sort of suffering simply can’t find a way to pay for enough food. That being said, only someone particularly twisted could advocate for prisoners, about 40% of the prison population in fact, to die of starvation. Yet this is exactly what happens in labor camps throughout North Korea. This, as one can expect, causes a great deal of illness and has led people to extremes, including cannibalism being often reported, and stories of children fighting each other for pieces of undigested food found in animal dung. 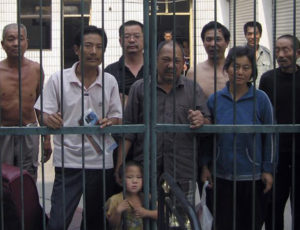 Now, the last two entries might have you wondering how people can already be captured before their relatives try to escape, or that it might be rare for children to be in prison camps. Well, neither is uncommon due to the practice of three generation imprisonment. Basically, if your grandfather committed a crime, your parents and you (if you survived infancy) would remain in prison until you died. Given how likely people within a prison camp are to be convicted of a crime, though, it’s unlikely your children would see life outside of prison, either. Most who are born into camps like this are taught to feel guilt for what their family had done, but also have no close association with them, often turning them in for crimes for what would be perceived to be extra rations, only to face torture. 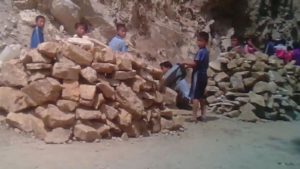 When it comes to this word, most people have a very specific image and time period come to mind. What that usually isn’t is a North Korean in the modern day. There are an approximate 65,000 active slaves from North Korea found in 40 countries around the world, and unlike many modern slave trades, are often government sanctioned. One such slave acquiring state is Qatar, who has in previous years shown no aversion to using slaves as the main labor for their bid at the 2022 world cup. Estimates claim that by selling their own people, the North Korean Government nets around $2 billion annually.

5. The development of Biological and Chemical Weapons 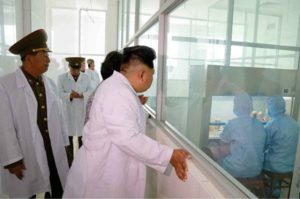 Much of the focus of the West has been on North Korea’s nuclear capabilities, but I would posit that there is a greater threat that they have been developing, and could be reasonably expected to be testing on their own people, biological and chemical weapons. Not only that, but they are in the business of weapons distribution, often handing off supplies to Syria, Iran, Libya, and Egypt as a way for those countries to carry these illegal weapons without being caught with the fermenters and facilities that would usually indicate something was wrong. Unlike nuclear weapons, these can be used much more discreetly and be more selective, as was the case when North Korean agents killed the brother of Kim Jong-Un on his orders using a VX nerve agent soaked handkerchief overseas. This means that even if their ballistic program doesn’t manage to go anywhere, a handful of North Korean agents could perform a terrorist act which would have large implications if properly performed.

When most people think about North Korea, they think that the border is sealed tight, with no one leaving the country without constant surveillance, and the state wants essentially no international traffic. And they’d mostly be right, except for manual slaves, and networks of human traffickers and sex slavers which are often found near the Chinese border. While often being told they are getting a chance to escape without the government’s knowledge, many girls and women are sold into slavery almost immediately for the cheap price of $2,000, with the government usually getting a decent cut. This can turn into a juggle though, as police of China may find the enslaved girl, toss her back to North Korea, and the process begins again, but this time starting in a prison. 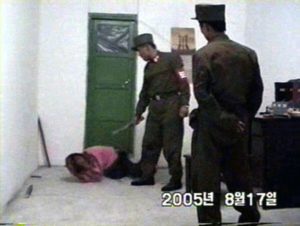 This far into the list, it should be obvious that torture is a very common method of coercion and punishment in the DPRK. Often crippling or sexual in nature, torture is terribly common across all prison populations within the country, ranging from water boarding, to beatings to forced animal attacks. What makes things even worse is that most guards are taught that prisoners are somehow sub human and are encouraged to have a bit of “fun” with their charges, often inciting them to commit violent acts to one another, with the threat of even worse torture if they fail to do so or even falter a moment in disobedience.

2. Religion made punishable by death or prison 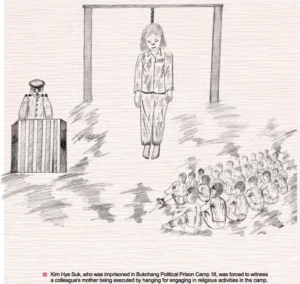 In the dystopian country that is North Korea, God can be a dangerous thing. Something that people can pray to above the Supreme Leader, to hope for a better life, or to have a congregation form around? For the North Koreans, this is seen as a direct threat to the Government and thus even the tiniest step towards it is stamped out, often violently. This does not require anyone of religious following to openly preach to the populace to face harsh punishment for beliefs, but so much as owning a Holy Book (one preacher got severely persecuted for leaving a Bible in a nightclub on accident). As an added bonus, all non-State associated holidays are out, and if you are celebrating any, you are in some massive trouble. Kim Jong-Un, being the ultimate grinch, even took away Christmas from his populace, instead making them celebrate his grandmother’s birthday which happened to be Christmas Eve anyways. Raids for both are common, and death by torture or firing squad is as well.

1. Use of Weapons of Mass Destruction against the Populace 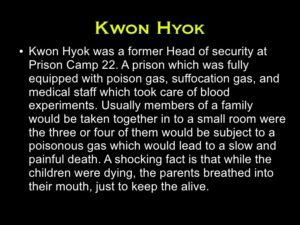 As mentioned in number 5, it is reasonable to expect that the North Koreans could use prisoners as subjects for experiments regarding weapons. With a 40% death rate, why wouldn’t they? Plenty more bodies to cover it up, and it’s unlikely that anyone would really talk about it. Except, perhaps, an escaped scientist who used to run said experiments. Exactly this event happened in 2004, when a Dr. Kim escaped the country and told of how he would run chemical weapons experiments on behalf of the North Korean government to determine exactly how much of certain weapons would be needed to destroy the large city of Seoul, South Korea. There have been other reports of horrific weapons use, like the implementation of gas chambers, and the poisoning of cabbage which was fed to 50 healthy female prisoners, just to have documentation on dosage and manner of death.