Before Justin Kittredge founded iSlide, he was employed with the famous footwear brand Reebok. It all started after he got an internship there in college, and then snagged a job in product marketing and development. Justin stayed with Reebok for a good ten years before he was laid off in 2014, and says he learned a great deal from the experience. In addition to the knowledge, Justin was about to use his networking and contacts in his iSlide business.

Interestingly enough, Justin was quasi-famous long before he appeared on the Shark Tank. In 2009, he competed and accomplished getting two Guinness Book of World Records in basketball. According to a 2009 Business Wire article, Justin won the award for shooting 64 unassisted free throws in two minutes, as well as making 16 blindfolded free throws in one minute. That one is particularly impressive because the previous record was only 5 throws in 60 seconds. Justin apparently practiced while he was on duty at Reebok, and he also ran a nonprofit called Shooting Touch, Inc. While he was the President of that company, he taught young people from Boston how to play basketball. Clearly, the entrepreneur is great at basketball, but can he impress the Sharks with his business knowledge? Let’s take a look. 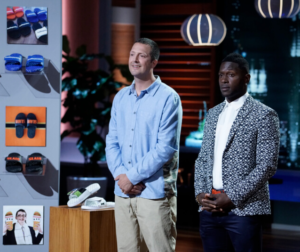 Justin Kittredge walked out onto the stage to face the sharks. He was confident and ready for his presentation. Justin introduced himself as the CEO and founder of eyes, which was a custom wide shoe company. He asked the shark for $500,000 in exchange for 5% of his company. This was becoming a new trend on the show, to ask for a very low valuation of your business.You could tell that Daymond John was very annoyed.

Justin described his business in grandiose terms. He insisted that I slide the only slide shoe company to offer as much customization as they did. I slide offers different patterns and colors for team sports, brands, companies, as well as individuals. Justin claims that he has already been working with big names such as Madonna, Justin Bieber, LeBron James as well as several rappers. The company doesn’t just concentrate on its customization. It also realizes that it’s a shoe company, and prioritizes comfort and wearability as well. He went on to further post about how many sports they currently had relationships with. Justin was smart to appeal to Mark Cuban by telling him that the Pittsburgh wide receiver, Antonio Brown, also wears the slide shoes. Mark Cuban is the owner of the Pittsburgh Steelers. Justin went on to say that it took him three years to get the business to where it is today. He finished his presentation by repeating the company motto and asking wanted to see their personalized gifts.

Justin went around to give each shark their own version of the iSlide shoes. Barbara’s had her name on them, and they were bright powder blue. Robert had to do with car racing, which he loved. Justin had clearly done his research. Robert walked around to try the shoes out. He told Justin that every day when he wasn’t wearing a suit, he was wearing flip-flops. The iSlide was the most comfortable sandal he’s come across so far. Daymond asked Justin if he works at Reebok since the entrepreneur lives in Boston, the home office of the major shoe company, and had a footwear business of his own. Justin affirmed that was true. Kevin cut in and asked him to describe his business model since he was evaluating the company at almost $10 million.

Justin told the Sharks that he had been in business for three years, and had done $1.5 million in sales so far. The looks on the Sharks faces said that they didn’t think that was a good enough excuse to value the company at $10 million. Justin explains that there are four different distribution channels. The first one was individual, where the customer comes on the site and purchases a pair of the slide shoes for $50 each. Justin told the sharks that it costs iSlide $15 per pair of shoes to let the customer completely customize their product, and have it shipped to them in under a week. Robert asked how much of the sales come from that channel, and Justin explains that it was only 15%. The bulk of the revenue was coming from sports teams and drop shipping.

Lori wants to know who they were drop shipping to, and Justin informed her that it was mainly from one person – DJ Khalid. The rapper came up with a bunch of different sayings to put on the shoe, and then he would drop ship them to customers. He ended up selling 800 pairs of shoes during his first day with the company. Daymond asked if Justin was getting his valuation for his business from just one influencer. Justin insisted that DJ Khalid was only one part of the equation. He said that the other branches of the business were growing every day.

Kevin asked what the net profit was after Justin subtracted all of their costs and his salary. Justin said that they did about $750,000 in profit per year. Kevin told him that that was ridiculous, and asked how he could possibly justify is 10 million-dollar valuation. Justin gulped, but in the background, Antonio Brown from the Pittsburgh Steelers was walking onto the stage. Mark Cuban looked impressed. Barbara asked Antonio how he liked his slides, and Antonio replied positively.

He said that he really enjoyed iSlide because it enables people to express themselves in many different ways. Mark Cuban asked him if he sold these shoes on his personal website, and Antonio said that he had sold over 400 slippers in just one week. Daymond said that he was attracted to the idea, and he understood why Antonio was worth $10 million but didn’t quite get why iSlide got the same valuation. Justin said that he understood why the valuation is coming up a lot, but he felt like the personalization aspect of his business was worth that amount. Lori told him that she had a major problem besides the valuation. There is nothing to prevent anyone else from doing the exact same thing. She went out.

Robert told Justin that he saw the appeal, and was willing to take a chance. He offered him $500,000 in exchange for 20% equity. Justin thanked him and asked if he minded is he heard out the rest of the offerings. This is where entrepreneurs get themselves into trouble. The Sharks were often not patient about letting someone else take over their deal, and the valuation quickly goes down from there. Let’s see how this plays out.

Kevin said that he could help, and he went out. Justin addressed the remaining Sharks and asked them to hear a bit more about him. All of them said that they know everything they need to him. Robert interjected, saying that there is talking time and then there’s closing time. He told Justin that he was on the 1-yard line. Barbara said that she thought Justin was too optimistic and asking the Sharks to invest today and tomorrow’s value. She went out. Daymond and Mark were still in, and Robert’s deal was still out on the table. Justin started pitching again despite the Sharks protests. He told them he had been laid off from Reebok in 2014, and this business was his way of ensuring that succeed. Mark said that he respected Justin’s hustle, but it was not in investable business for him. He went out.

Justin looked devastated. It seems like he was forgetting Robert’s deal. Daymond said that he was out as well because the business was only worth $500,000 and he was asking for so much more. Kevin asked him how he could say that a tchotchke company was worth 30 times revenue. He called Robert out of his mind because he was willing to pay $2.5 million for it. He said that he couldn’t watch Robert kill money that way because children were watching the show, and it would set a bad example. Justin tried to counter at $500,000 in exchange for 10%, but Robert stood firm. Antonio Brown encouraged Justin to take the deal. Justin looked conflicted for a moment but ended up turning the deal down. Robert smirked a little bit and told Justin that he doesn’t know what he doesn’t know. He wished him luck in grinding it out. Justin ended up tearful in his post-interview, thinking about his other investors and the team of people that had worked hard to get iSlide ready for this presentation. Let’s see how they do after their episode airs.

iSlide Now in 2018 – The After Shark Tank Update 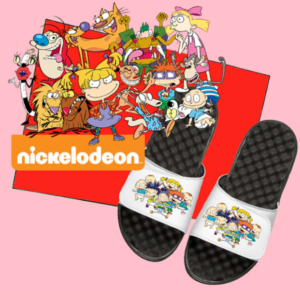 According to Forbes.com, iSlide has benefited from the Shark Tank effect, despite not getting a deal. It has gotten a licensing deal from Nickelodeon, began collaborations with New Kids on the Block, celebrities, and a partnership with Fanatics, which is a big website for sporting goods that are licensed by college or professional teams. Some of the celebrities that are affiliated with the ISlide brand are the rapper 2Chainz, actors Mark Wahlberg and Ice Cube, as well as comedians Ellen Degeneres and Chelsea Handler.

They received 5 stars out of 77 reviews on their website, most of which say that the shoes are very comfortable, and the customer service is excellent. They also have 5-star reviews on their Facebook page, where they are followed by almost 8,000 people. The iSlide Facebook page updates frequently, informing their fans about things like their partnership with Ellie Fund, a cancer-fighting non-profit company, for Breast Cancer Awareness month. It looks like iSlide is doing just fine, despite its lack of a deal with the investors on Shark Tank.