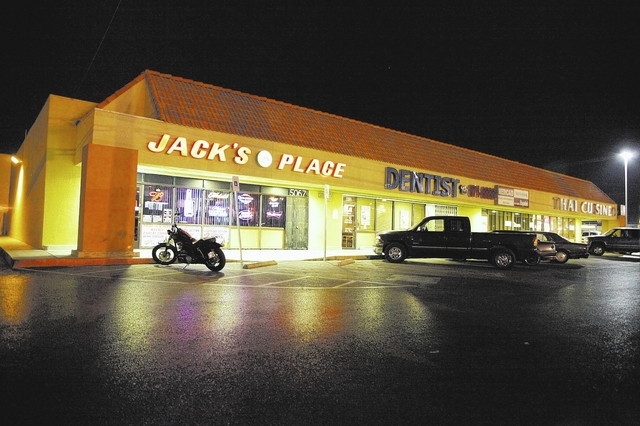 In 1997, Corinne Vaughn started bartending at an eastern Las Vegas dive bar, Jack’s Place. She was a preschool teacher at the time, and she didn’t make enough money so she started to supplement her income by going into the bartending industry. Then, in 2008, she took over as owner. When Jack was ready to retire, she wanted the bar to keep going. She had made a lot of friends and loved the bar, so she purchased it. Although, success at Jack’s Place has proven success to be a struggle, and the customers and regulars have literally begun to die off – literally. Corinne has attended more than 50 funerals of regular customers, and she cannot manage to pull in a younger crowd.

Corinne’s hands-off management style has lead to undisciplined staff whose antics drive away new business. This, of course, includes many of the staff calling Corinne “mom.” Already a mother of four, she proved unable to leave her motherly instincts at home and treats everybody like family. Manager Ernie says that she treats everyone like they’re her kids. When you own a business, you absolutely cannot do that. The bartenders all have issues, but Corinne is soft and there is no discipline. Truthfully, Corinne hates confrontation and treats everyone like they should have second chances.

Now, Corinne’s dysfunctional family is out of control, resulting in chaos and pushing her to the edge. She is in debt more than $500,000, and set to close the bars of Jack’s Place any day. As a result of her not taking paycheck for 7 years, she has lost absolutely every one of her assets, including the home that she raised her kids in. The finances have also taken a toll on her personal life, as she and her husband fight constantly, her health is declining from all the stress, and she’s exhausted. Corinne has seen it fit to pull back the doors, burst open the books, and reach out to Jon Taffer and Bar Rescue to perform a miracle.

Outside of Jack’s Place, Jon Taffer pulls up in his recon vehicle with expert mixologist Phil Wills. Las Vegas is Jon Taffer’s hometown, and he knows the market well – they’re in a specific side of Las Vegas that tourists rarely ever see. The area is all gray and blue-collar employees, and they want to go to a nice neighborhood dive bar, but one that is still cool. Bars in strip malls can work out well, but only if they’re done right. Phil himself is also familiar with the Las Vegas area.

Jon explains that Jack’s Place was opened in 1980 by Jack Regan, who is a state senator of Nevada. After he passed away, Corinne, a bartender at the time, bought it from his estate. Jack’s has been in business so long that many customers have literally died off, and the challenge with a bar like that is not alienating the existing crowd. Instead, they have to grow multiple ways at once. The worst thing is that Corinne has never taken a paycheck since she owned Jack’s, and is in the hole $500,000.

The sign of Jack’s Place is very dated, which gives the bar a terrible front without anything inviting. There is no personality, and Phil says that if the outside is so devoid of character, then the inside will be as well. Inside, Jon mocks the rope lights strung throughout the establishment. If you were going to get rope lights and go to the mall, you would have a proper plan, but this is a bar. The carpet is also aged, and it looks like carpet from a hotel’s banquet room from the 1980s. In the bar, manager Ernie tends the bar although she has only worked there for a year. There is also a second manager, Caryn, on stand-by. Then, a third manager, Travis, is Corinne’s son who also fills in at time.

Jon then tells Phil the worst part – all the staff calls Corinne “mom.” Jon then explains that he reached out to specific spies for recon purposes, and calls in John Mac of Sunny 106.5, a local radio station, and Big D from The Bull 95.5. The two have agreed to lend a hand in packing the place, so the two spies enter the 2,000 square foot space with a circular bar and one speedwell. The bar is located 11 miles northeast of The Las Vegas Strip. John and D sit themselves down and order a Lynchburg Lemonade, which is one of the most popular mixed Jack Daniels drinks in the world.

Bartender John struggles to make the drink; at first, he does not use a mixing glass to mix the drink and instead opts for a pint glass. Phil points out that you definitely want to shake the drink due to the citrus – shaking the drink causes the citrus to aerate out some and result in a more rich flavor. You want to break down the tartness, and there is a big difference in taste when you don’t shake it. The two spies sip their drinks, and both of them are repulsed. The lemonade is too bitter and tart, which only proves Phil’s point.

Bartender John, the man responsible for making the two spies’ drinks, then takes to trying to perform a bartending move where he flips a bottle behind his back and catches it. The two spies explain that it is totally awkward to watch him flip a bottle. Granted, this happens because it’s Las Vegas and flair bartending is a thing that happens a lot, but they don’t typically practice in front of you. John continues to play with the mixing utensils, and ends up losing the mixing cup on the floor. Phil explains that while they are in Las Vegas, local bar patrons do not want to see that – this is more of an activity reserved for The Strip.

Manager Travis speaks out against John’s antics, but John plays ignorant and continues to do stupid flipping tricks. Again, the two spies point out how awkward it is to witness this, and manager Travis eventually demands that John step out from behind the bar. John relents and steps out, sitting next to the two spies, who could not look more uncomfortable. So now, John is drinking and even chugging his cocktail. This isn’t good, Phil says. Corinne then calls John to the back and tries to explain to John her situation, ultimately patronizing him like a child. Jon, frustrated with the silly antics of the bar, storms in to start setting things right.

Jack’s Place was renamed to Regan’s Lounge, which is named after the same Jack that founded Jack’s Place. The bar was still opened and operating well, although profits and success are left up in the air, so there is no measurable unit to see if Corinne Vaughn is out of debt or not. However, one interesting fact to note is that there was an extensive fire in September of 2017. Las Vegas Fire and Rescue released a press statement with some important details; the fire was spotted at 3:58 AM, there was about $500,000 worth of damage, and it took a team of 5 firefighters about 30 minutes to bring the fire under control. The fire “gutted the lounge and burned a large hole in the roof, and the dental office had moderate damage.”

Despite the crippling fire that could cause Regan’s Lounge to close for good, the bar rescue attempt was successful. While not many new reviews have surfaced following the episode, a few regulars have praised the menu refresh and the interior renovations. It currently has a 3.8 star review on Yelp, and a 4.1 star review on Google. Regan’s Lounge does not have an active Twitter or Facebook, or any social media.