The Martinez Twins Net Worth 2018 – How Rich Are The Social Media Stars? 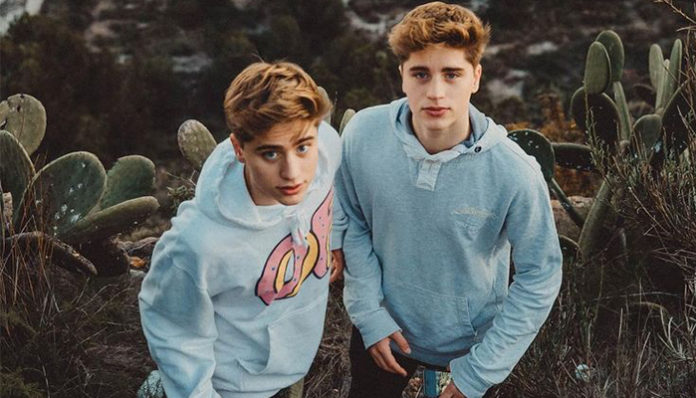 A popular duo, the Martinez Twins originally rose to fame on Instagram a couple of years back. Hailing from Spain, the brothers’ good looks quickly won over the hearts of thousands of fans on social media. Within just a few months, they had themselves a substantial following on the photo-sharing app, Instagram.

From there, the twins teamed up with their best friend, Beasley, to create a Youtube Channel under the name, the Martinez Twins. Aside from vlogging their everyday adventures, they also post videos such as challenges, and pranks, many of which feature guest stars (such as their fellow team 10 members). As of 2017, Ivan and Emilio have accumulated over 3.5 million followers on the site, making them one of the most popular pairs on Youtube.

One of the most popular duos on social media, the Martinez Twins currently have over 12 million fans across their accounts. With that kind of number, how much have they managed to earn from their online career so far? According to sources, they currently have an estimated net worth of $500,000 each. Let’s take a closer look to see how they banked such an amount.

How did The Martinez Twins Make Their Money & Wealth? 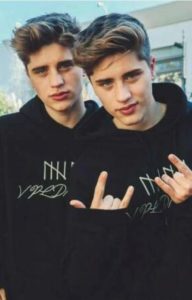 Born on May 10, 1999, in Spain, Ivan and Emilio Martinez grew up in the Catalonia region with their sister, Rebecca, who is a tennis player. As twins, the two brothers have shared an incredibly close bond ever since they were young (as it is with most twins). Unfortunately for now, not much else is known about their early life, other than the fact that they spent their childhood in Spain.

As it happened, the Spanish brothers were introduced to social media, Instagram- to be more precise, by a few friends in high school. One of the latest crazes at the time, the twins jumped right into it. Though they had no idea where they were going to go with it at the time, they both created themselves an account on the app, to which they began posting selfies, and other photos.

Having inherited their parents’ good looks, the brothers had no difficulty at all attaining an audience on the platform. At the age of sixteen, Emilio Martinez posted his first photo onto Instagram- a zoomed in feature of his blue eyes. Despite its simplicity, it quickly caught on among Instagram users, garnering hundreds of likes, much to the teen’s surprise.

Similarly, his brother Ivan Martinez posted a selfie for his first post, which was uploaded to his feed in September 2015. Much like Emilio’s photo, it soon receieved dozens of likes- marking the beginning of his social media career. Inspired by their early success, the twins continued to upload additional selfies to their respective pages, which worked to grow their following at a steady rate.

Combined, the brothers currently have over 9 million followers on Instagram; Emilio has 4.8 million fans on his account, while Ivan has 4.4 million fans on his. A couple of power users, their posts easily receive upwards of 500,000 likes each. With the engagement and audience that they have, it’s incredibly likely that they’ve been monetizing their respective accounts over the past couple of years.

With how popular social media is nowadays, it has become a common platform for brands to advertise their products. The way it works, companies often pay web celebrities a fixed amount- generally in the hundreds of thousands, for a sponsored post to be uploaded to their account, which is then in turn, viewed by all of their followers. Depending on the user’s audience and presence, it’s not unheard of for some individuals to be able to make a few grand from a single campaign!

Unfortunately, earnings from such gigs are rarely, if ever, publicized. While it’s likely that The Martinez Twins have gotten themselves involved with endorsements and the like on Instagram, there’s almost no way for us to know how much exactly they’ve pocketed from such gigs. For now, all we can say is it supplements their overall income.

In addition to their Instagram success, they’ve also made themselves known on Youtube. Teaming up with Beasley, a close friend who also happens to be an Instagram celebrity, the trio established a Youtube channel together called, The Martinez Twins in early 2016. Their first video titled, Savage Challenge Gone Wrong, which featured all three teens, was uploaded on June 30, 2016. From then until now, it has been viewed over 375,000 times.

A comedy channel, the friends have since continued to post new videos on a regular basis, from pranks, to challenges videos. In the more recent months, the Martinez Twins have also begun to vlog on a regular basis- for instance, they recently vlogged about their move back to Spain, from Los Angeles.

As you can probably guess, the brothers make a decent amount from their Youtube videos. As of October 2017, they have accrued over 3.5 million subscribers with more than 222 million lifetime views;  currently, their most popular upload, We Duct Tape the Team 10 Pool!! has receieved over 7.4 million views. Some of their other top videos include, Reacting to Our New Song: It’s Everyday Bro, Waking Up in a Pool, and the MV for their song, Fake Friends.

How much have they pocketed from their channel so far? As of October 2017, they receive upwards of one million hits on a daily basis- how does that translate into ad revenue? On average, the site pays its partners anywhere from $2 to $5 per 1,000 ad views; with one million views a day, that would work out to be earnings of $800 to $2000 per day!

Assuming that 40% of their total view count (e.g. 222 million) have been monetized, The Martinez Twins would have already earned in the ball park of $178,000 to $445,000 so far- before Google’s cut. At the rate that their channel is currently growing (e.g. a few thousand new subscribers per day), their ad earnings are almost guaranteed to go up as well, with time.

In addition to their solo ventures, the brothers were also a part of Jake Paul’s Team 10 crew (up until earlier this summer). On January 16, 2017, a welcoming video titled, Team 10 Welcomes the Martinez Twins was posted to the group’s Youtube channel- since then, it has been viewed over 1.2 million times.

Collaborating with other members on their joint channel, Ivan and Emilio were featured in many of their videos such as Martinez Twins Answer Your Questions, Emilio and Ivan Respond to Your Comments, Team 10 Rap Battle, Who is Alex’s Favourite Martinez Twin, and more.

One of the most popular social media groups on the web today, their Youtube Channel has amassed over 2 million subscribers as of October 2017. Altogether, their videos have been viewed more than 78.4 million times.

In addition to their work on Youtube, Team 10 is also involved in other things- for example, they embarked on a tour in 2016. Announced that August, it kicked off in mid October in Nashville, Tennessee. A rare opportunity for fans to be able to meet the members in person, the tour ultimately ran for twelve dates across the United States.

On their group site, a variety of merchandise is also available for sale via their online store. Looking at their selection now, there’s a wide array of products from t-shirts, Halloween bags, to phone cases.

Reiterating what we said earlier, Emilio and Ivan Martinez is estimated to have a net worth of $500,000 each, as of 2017. From everything that we have explored above, it’s apparent that the brothers have earned this fortune from a number of sources, the most obvious being that of their Instagram accounts, and Youtube channels. On top of their solo efforts however, it’s presumed that they also made a decent amount from being a part of Team 10 (e.g. tours, public appearances, merchandise, etc).

Though they’ve since parted ways with the group, The Martinez Twins have showed no sign of stopping down on social media- if anything, they’ll continue to rise to the top over the next few years.

Are Either of the Martinez Twins Married?

No, as far as we can tell, neither Emilio nor Ivan Martinez are currently married. In fact, our best guess is that both brothers are currently single.

Do Either of the Martinez Twins Have any Children?

No, neither of the twins have any children to our knowledge.

How Can we Tell the Martinez Twins Apart?

Though identical, the twins have a few noticeable differences in their appearance; for instance, Emilio has a freckle above his upper lip and longer eyebrows than his brothers.

Did the Martinez Twins Go to College?

Recently out of high school, the brothers have not continued their education at college as far as we can tell. Considering how successful they currently are on social media (and how lucrative their online careers are), this is not too surprising.

For the last two years, the Martinez Twins lived in the Team 10 home in Los Angeles, California, with their fellow group members.

At the end of July 2017 however, it was announced that the brothers would be leaving LA, to return to Spain. Their journey back home was ultimately chronicled in a series of vlogs on their Youtube channel. We do not have any pictures of their home to share at this time.

What Kind of Car do the Martinez Twins Drive?

Unfortunately, we do not have any information on the brothers’ vehicles at this time.

From Instagram celebrities to Youtube stars, the Martinez Twins have definitely made their mark in the online community over the past two years.

As mentioned earlier, the twins have already amassed 3.5 million subscribers on Youtube as of 2017. On Instagram, they’ve also got over 4 million followers each.

How Much Did the Martinez Twins Make Last Year?

While it’s clear that they made a decent amount in 2016, the exact figures have not yet been revealed.

Though they’ve parted ways with Team 10 (on friendly terms), the brothers have shown no sign of slowing down- mighty active on social media, they still update their respective accounts (e.g. Instagram, Youtube) on a regular basis.

If you want to stay on top of their news and announcements, be sure to follow the twins on social media- you can find Emilio on Twitter at @emartineeez and Ivan at @imartinezp_.