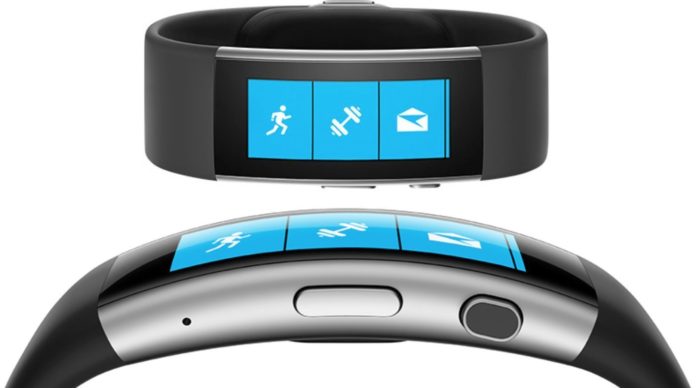 The Microsoft Band, released in 2014, was a sensor laden behemoth. It was unsightly, and had all the quirks and annoyances of a first-gen product. This time, however, Microsoft promises to deliver with the Microsoft Band 2. It’s an extremely expensive device, with it’s $250 price tag nearing that of some fully fledged smart watches. However, being made by the Redmond behemoth assures quality you wouldn’t find elsewhere. However, it does come with a proprietary health platform – Microsoft Health. It’s not compatible with Google Fit or Apple Health, so you’ll be stuck with the admittedly odd Microsoft Health App, available on Windows Store, the App Store, and the Google Play Store. With even more sensors and an updated curvy design, it looks set to be a winner. Let’s find out how it fares in this review.

First things first, it’s still a bit of a behemoth, but it has a nicely curved screen, which conforms better to your wrist than the first Microsoft Band (2014). It also has the added bonus of being a little more pleasing to the eye, with a design similar to that of the Samsung Gear Fit. It still retains it’s rectangular display, with the time going horizontally, but the design has a little bit of extra flair compared to the original Microsoft Band. For starters, the display is curved, but there’s metal on both the timepiece and the clasp, which give it a more sophisticated look. This contrasts with the original Microsoft Band, which featured an almost toy-like design. Overall, the design of the Microsoft Band 2 is great, and it’s viable to use as a watch/timepiece, as opposed to strictly being a fitness device.

Usually, when I review a fitness device, I’ll talk about the placement within the ecosystem of it’s companies lineup. However, the Microsoft Band 2 is the only fitness tracker that Microsoft currently offers. At it’s sky0-high $250 price tag, I would say that it’s a flagship device, like the Fitbit Alta HR or Charge 2. It’s not in the same class as the Fitbit Blaze or Ionic though, since it has a dissimilar form factor and doesn’t market itself as a watch, more a fitness tracker. However, it has even more sensors than the Fitbit Alta HR, so if you want maximum data from one device, the Microsoft Band 2 is even better than the top end of other devices on the market. The trade-off here is that it’s a more focused device than other trackers – it’s bulkier and heavier, and doesn’t have as many other features.

As mentioned before, the feature-set of the Microsoft Band 2 is heavily fitness focused. That’s evident in the sheer number of sensor that Microsoft has packed into the device:

That’s an impressive number of sensors, and it’s utility is shown in the depth of insight you can get from the Microsoft Health app. The standout sensors here are the GPS and the heart rate sensor – things which many smart watches lack. If you want a GPS on your Apple Watch, for instance, you’ll need to shell out for the Series 2 or even Series 3 versions, which are supremely expensive. The GPS is great for tracking your runs or walks, but Microsoft states that “Advanced functionality like GPS use will impact battery performance.

Aside from the sensors, the Microsoft Band 2 also sports some other features too. Although it seems like an afterthought, the Microsoft Band 2 actually has a few smartwatch-like features. For instance, you’re able to read notifications, check your calendar, or even email on your wrist. However, because of the awkward screen orientation, you’ll need to rotate your wrist to do so. What’s great about this smartwatch-like functionality is that it can replace the smartwatch you’re currently wearing, so the high price tag can be justified by the fact that it’s a timepiece, A smartwatch of sorts, and an amazing fitness tracker all in one. It’s important to note, though, that you can’t install any third party apps on the Microsoft Band, unlike many smartwatches where you can, like the Apple Watch. If you’re looking for a fully fledged smartwatch, this isn’t the one.

Tracking And The App

The Microsoft Band 2 works with the Microsoft Health App, which is available for the three largest phone platforms – iOS, Android, and even Windows 10 Mobile. To set up Microsoft Health, all you need to do is enter a few details about yourself, and then the Microsoft Band tracks everything automatically and flawlessly. Syncing is automatic, so until you want to view your data, it’s a fire-and-forget operation. From a UI perspective, the Microsoft Band 2 is a little odd, since it relies on the whole tile interface which Windows was bashed for in the days of Windows 8, but it actually works relatively well on the Band 2. The only thing is that it does look a little outdated, but functionality-wise, it’s excellent.

Still, as I mentioned before, the Band 2’s primary focus is the tracking, and it does that excellently. The tracking on the Microsoft Band 2 is precise, accurate, and easy. Everything is automatic, so the might of the plethora of sensors is unobtrusive, and is only noticeable once you open the app to check your stats. The GPS is a killer feature on the Microsoft Band 2, and although it’s not the most precise GPS, it’s passable, since the Band 2 is much smaller than any phone with a precise GPS. Even though it’s not the most precise, it’s more than useable for tracking your runs or walks, including data for distance and speed. Overall, it’s a great tracker, and the sheer number of sensors in the Microsoft Band 2 make it one of the most thorough trackers on the market.

The Microsoft Band 2 is similar to a smartwatch, in that it has a large OLED display, a hefty price tag, and, unfortunately, it also has pretty poor battery life – like many smartwatches on the market. In normal usage, it lasts around 1-2 days, which is the same as my Apple Watch, which runs a pretty hefty watch operating system. This is disappointing, as there aren’t any third party apps for the Microsoft Band 2, so Microsoft has every opportunity to perfect the optimisation for their battery life. They may have, but at the end of the day, the battery life is still not what I’d expect for a mere fitness tracker. However, this may be explained by the fact that it has an exceeding amount of sensors, which may be very power-hungry.

The OLED display doesn’t help either, since it’s fairly bright and large. It’s nice to have, but I think it’s an unnecessary addition for a fitness tracker, and it severely impedes on the battery life of the tracker. If you were thinking of charging the Microsoft Band 2 when you get to work, think again. The Microsoft Band 2 relies on a proprietary charger, so you can’t just use any old micro USB cable to charge it. This seems to be the trend across most smartwatches, but it’s especially annoying on the Microsoft Band 2, since the battery life isn’t so good. Overall, though the OLED screen is nice to have, it’s rather unnecessary and results in the battery life being sub-par.

Usually, trackers like this one have some sort of waterproofing feature, as well as dust resistance. However, the Microsoft Band is similar to early smartwatches in that it has next to no waterproofing features. It has “water resistance”, but it isn’t even rated, let alone being waterproof. The Microsoft Band 2’s “extra feature” could be that it can, in fact, behave like a watch, and in some aspects, a smartwatch. The live tiles, integrated into the UI, serve as mini-apps, which you can open to read information. For example, there’s Facebook Messenger tile, where you can see the last few lines of the last message you received, but there’s no downloadable tiles/apps other than that. This is the closest to a smartwatch app you’ll get on the Microsoft Band 2, and while it’s rudimentary and doesn’t have any room for customisation, it’s a handy feature.

As well as the “apps”/tiles on the Microsoft Band 2, you’re able to receive notifications on it. This is similar to notifications on almost any other tracker, in that it’s not nearly as comprehensive as it is on a fully fledged smartwatch. Still, it’s better than nothing, and keeps the Microsoft Band 2 in line with it’s Fitbit counterparts. Overall, the Microsoft Band 2 isn’t awash with extra features, but the smartwatch-ish features are useful, and provide some insight as to where we might lead with trackers. It seems that trackers are morphing into becoming fitness-oriented smartwatches, as opposed to standalone trackers.

This is a real weak spot for the Microsoft Band 2. Normally, a fitness device will usually have a few customisation options, in the form of different bands, with varying levels of flashiness. The Microsoft Band 2? None. You get a black plastic elastomer band, and that’s it. There is absolutely no room for customisation, as the bottom clasp contains electronics as well. This is a huge problem, as plastic elastomer isn’t known for it’s beautiful wearing or it’s durability, and sure enough, users all around the world have reported that the un-reparable un-replaceable band starts to crack under minimal use. This is a huge problem, and I hope this problem is addressed as soon as possible, as it’s incredibly expensive, and a crack would almost certainly ruin the user experience.

The value for money for the Microsoft Band 2 depends on how you look at it, or how you use it. If you’re looking to use this mainly as a fitness tracker, this represents some of the best value for money around, since it has a huge amount of trackers which all work together to give you insights via the Microsoft Health app. Outside of that, using it as a watch, and a smartwatch, it fails to deliver, as it just isn’t set out to be a fully-fledged smartwatch. As a heavily fitness oriented smartwatch, it does well, and Microsoft seems to have priced this competitively compared to other fitness oriented smartwatches.

The Microsoft Band 2 is a fantastic device. While it isn’t the best looking device, and it isn’t the most durable either, it’s a comfortable and very useful device, if you’re into fitness tracking. The fitness tracking is it’s main forte, and anything outside of it it struggles in, especially where it is trying to be a smartwatch. However, if you’re just in it for the tracking, and think it’d be nice to have notifications on it too, then the Microsoft Band 2 is nearly the perfect device. Overall, it’s a great fitness tracker and decent smartwatch, and I’d recommend it to anyone who wants to graduate from a cheaper Fitbit, or wants to up their tracking game.