Before Shark Tank, Melanie was a self-taught photographer. Originally from Germany, she moved to the United States with her husband. They began to have children right away, and she did not have the time to go to college. She decided to make a living in a way that also allowed her to spend time with her kids. She began selling her car seat cover design, which she called Milk Snob, via various social media channels. She sold over $1.3 million dollars worth before even appearing on Shark Tank. Would she be able to impress the Sharks with her numbers and her product enough to get a deal? Let’s take a look. 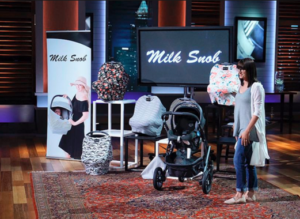 Melanie Dismark walked out onto the stage and into the Shark Tank. She introduced herself to the sharks and began her pitch. She told them that her company is Milk Snob, and she is looking for $125,000 in exchange for 5% equity stake in her company. She started her presentation by telling them that all new parents use some kind of canopy cover for their car seats. But the conventional ones would not stay put. Either the children would pull on them and pull them off, or they would fly off into the wind. This got a laugh out of Cuban as the fan blew off a blanket from the car seat that was on stage. Melanie then introduced the Milk Snob cover, which was made of a stretchy fabric that firmly stuck in place. She told them it was a breathable fabric, and that it enables the mother or father to check on there and see at any time without waking the baby.

She insisted that the fabric was also super soft, and how it is great because it was a nursing cover. She told them that when you are ready to breastfeed you could just take it off the car seat, put it on over your clothing and have the baby there. It stretches so that you can nurse in public while giving yourself some privacy.  She claimed that the new Milk Snob car seat cover has become a must-have for new parents everywhere. She finished the presentation by asking which of the Sharks must have her as a partner.

Melanie started to pass out samples. She got a smile out of Kevin. Barbara told her that she thought the best part of being a baby was being able to see where you’re going in a carriage. Melanie told her that you would be able to adjust so that you can lower the handle and still give your baby some privacy while protecting them as well. She continued to hand out the samples to the Sharks. Kevin immediately want to know how long the Milk Snob car seat covers have been around, and what sales were going to look like this year. Melanie told him that they’ve been selling for 18 months and made $1.2 million in sales. He seems impressed. The sharks all told her that they were very impressed. Lori asked her where she sold, and if it was online. Melanie explained that she only advertised on social media. Chris Sacca, the guest Shark for the episode, told Melanie that he had seen her business online. He said that he’d seen her in the Facebook group, little mamas. Melanie confirmed that. He said that his wife loved the idea.

Barbara asked Melanie if social media was in her background. Melanie said no, she said that she was from Germany. She met her husband who is in the military and moved with him to the United States. She said that she did not have the time to go to college. They had children right away. Barbara asked her how much the seat cover was selling for. Melanie told her that they sold it for retail for $36. Lori asked her what her cost was, and she said that it was $7.60. She told them that it was manufactured in Dallas Texas. Mark Cuban clapped, and said that he was impressed that they made it for that cheap in the United States. Melanie nodded and said them last 5 months they’ve made $800,000 in sales. Kevin said that they love the story. Chris Sacca asked her why she was here. He told her the Milk Snob was one of the most successful businesses he’s seen on the Shark Tank.

Melanie explained that she was on the shark tank because she looks up to the sharks and let them know that she’s a horrible public speaker. She said that she was happy to be there, and wants to take it to the next level because they had started to get approached by larger retail stores. She would need a partner who would know how to take it to the next step as far as retail goes. Chris Sacca told her that he was blown away, and want to make her an offer. He said that he would give her $100,000 in exchange for 8%. Mark told her that that was a great deal, and she should accept. Chris continued, saying that he and his wife were investing partners and they worked from home together. While they raised 3 daughters of their own. He said that he was literally a driver of that device, and saw the benefits of it. He said that the only continuing contingency and his offer is that he would get to take a couple of those home tonight because he needed them for his kids. Mark said that he was going to go out because he thought that Chris was offering her a great deal. Lori told her that she really liked what she was doing, and she said that she was going to give her $125,000 in exchange for 10%. Lori stated that the reason she was doing 2% more is that she knew that she was worth it. Kevin offered $150,000 in exchange for 10%.

Chris told Melanie that Lori was a great Shark, but she did not know anything about the social media outlets that she was selling on. Chris was already familiar with the products because he had children of his own, and frequented those forums. Lori said that she had the reach to really blitz the product, and that was necessary because someone might copy the idea. Chris told Melanie that she needed to do more than just QVC. Melanie asked Lori if she and Chris would be willing to partner together, as it was her dream to work with 2 Sharks.

Chris said that he would be willing to do that, but explained that the equity would have to go up in order to have 2 Sharks. Melanie explained that she had worked really hard on the business, and did not want to sacrifice more of her business than 10%. Chris went out since she did not seem to be willing to give more equity in order to make it worth the effort for both Sharks. Kevin also went out since she was not even addressing him.

Melanie looked at Lori and asked if she would be willing to go to 8%. Lori said that she would give her $150,000 in exchange for 10% so that she would be motivated to work as hard as possible for Melanie and the Milk Snob business. Melanie took a deep breath and accepted. She told Lori that she was her original pick. The two hugged, and then Melanie walked offstage looking excited. Let’s see how she did…. 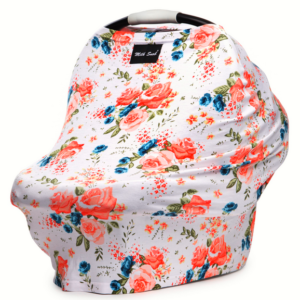 Since the Milk Snob episode aired, Melanie moved production of her business to Dallas Texas. She and Lori will be sure to go on to do great things. The reviews of Milk Snob have been great so far, with customers describing the product as easy to use, and “the best nursing cover ever.”