Alex Craig was cruising through Reddit one day, and found that The top post that day was of a potato. It had gotten over 5 million views. That got him seriously thinking about how to make money off of this excitement over a simple potato. He decided he was going to make a company out of sending messages on potatoes, and calling it Potato Parcel. It did much better than he could’ve ever expected. The company was generating over $20,000 a month in pure profit. But Alex’s dream was to go on Shark Tank. He ended up selling the website to Riad Bekhit, but decided that they would go to Shark Tank together and Alex would get a portion of the profits that they made from the Shark Tank effect. Let’s see how they do. 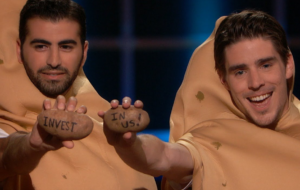 Two men in potato suits and sunglasses walked onto the stage, and faced the Sharks. They introduce themselves as Alex Craig and Riad Bekkit. Each of them pulled off their sunglasses.Riad Bekhit requested $50,000 in exchange for a 10% equity stake in their company. Alex said over the years the Sharks have heard all kinds of over-the-top and elaborate pitches, but they were here to keep it simple. Alex said he wanted to take this pitch back to their roots, making a potato pun. Riad stated that their company was Potato Parcel, and they sent potatoes with a message through the mail. That was it. Robert told them that he would need them to explain it a little bit further.

Alex explained that potato parcels a brand-new way of sending people a custom message that was written on a potato. Mark Cuban said that it was stupid on a stick and Alex corrected him that it was actually stupid on a potato. Daymond feigned surprised that they were wearing potato costumes, claiming that he thought it was a pair of testicles. All of the other Sharks laughed, but Kevin wanted to get right down to business. Kevin clarified the mission of the business, and asked how much it would cost for them to write a message on a potato for him. Before they could answer, Lori said that they need their samples. She wondered how they were talking about something when they didn’t even know what it looks like.

Robert asked how it was packaged, and Alex informed him that it came in a bubble envelope along with little burlap sack that they included with each sample. They began to hand out the samples to the sharks.Robert’s potato had a picture of himself on it, as did Marks. Mark said that he had a very handsome potato. Kevin O’Leary’s potato had is famous phrase on it: “There’s nothing proprietary about this.” He said his potato was absolutely right, and asked the entrepreneurs what happened to their careers. Robert ask Alex how he had come up with the idea. Alex told him that he was surfing Reddit one day, and saw that the top post was of the potato with stamps on it. He saw that over 5 million people had seen that in it, and saw a potential business out of it. Riad said that they had sold over 12,000 potatoes, putting smiles and an expression of confusion on 12,000 people faces.

Kevin asked what their cost was for each potato. Alex let him know that the regular potato with a message on it was $9.99 and the potatoes pal, which was the potato with a picture on it, was $14.99. Lori was in disbelief over those numbers. Robert grinned, and held his potato pal up to his face. Kevin went on to ask if they mailed it in a box, or if they were able to just stick stamps on the potato. Alex said that originally he had walked into the post office with the potato and asked if he could mail it The lady at the post office has said that he could mail the one, but when he showed her that he had 499 more, she says that they couldn’t mail all of them with Stamps. No if they put each potato in an envelope so that it fills the customer with surprise and delight.

Alex said he wants to show the Sharks more of their products. They lifted up the lid off a tray on the stage, and said that Potato Parcel was very seasonal. They had a spooky potato which was painted orange for Halloween. They also had a sweet potato for Valentine’s Day, and a potato ornaments for the winter holidays. Mark asked them if they had made any money at this venture. Riad let them know that they had made $213,000. They were re investing that money back into the business.

Mark Cuban wondered what was wrong with them that they would reinvest the money back into the business instead of realizing that they had tricked enough people into buying potato messages, and keeping it.Riad told him that they were reinvesting in order to put more money into inventory and hiring to help with order fulfillment. Riad insisted that their customers actually love them. They posted about them on social media, and also they had about 600 to 700 repeat customers. Lori asked them if they had day jobs. Alex said that he worked at a mobile app agency in Texas, while Riad stated that he worked at it full-time. Robert asked them if they were 50-50 partners.

Alex revealed that Riad actually owned hundred percent of the business. It had been Alex’s goal to go viral, and once that happened he sold the potato parcel website to Riad for $42,000. Kevin asked him why he still walked around in a potato costume, and Alex explained that it was always his dream to go on Shark Tank. The Sharks asked Alex why he was still in it since he wouldn’t be getting any equity. Alex let them know that there was a contingency with the deal that if they had ever got on Shark Tank, he would get one dollar per potato sold for the first 60 days after the airing of the episode.

Mark said that he had essentially gotten himself schmuck insurance. Alex agreed. Kevin asked Alex if he ripped off his royalty deal, and Alex winked at him and said that he did. Kevin said that that was outrageous, but he looked impressed. Mark wanted to know what Riad was actually buying. He told Mark that he bought the website, the rights to the business, and the training from Alex to actually run the business. The Sharks all cracked up laughing. Riad said that it had been a good investment so far. Lori asked him what made it a good investment, and he explained that they had made $25,000 last month alone. Their products were 70% margin because it was just writing on a potato, and then shipping it.

Robert said that he was interested and he liked it, but he thought that the valuation was crazy. Alex said that they based valuation on making $213,000 in a year. Daymon said that he couldn’t believe any of the Sharks are actually taking the deal seriously, so he was just going to sit back and watch it. Daymond was out. Lori also said that taking it seriously as far as the Shark actually investing was crazy. Robert wants to know what Mark was doing, and Mark said that it wasn’t completely crazy. He said that the novelty of it was a growth industry.

So far two Sharks went out, but three were still in and that was impressive. Mark said that in order to make it work, he need to see a path to $100 million in sales. He asked the two entrepreneurs how big they think they could get. Alex told him that they think they could get to five to $10 million in sales. Riad told him that they also had plans for retail as well. That set the Sharks off laughing again. Mark said that he need more substance in the business, and he was just hearing empty calories so he went out.

Kevin O’Leary said that he was struggling with the valuation. He said that he would give Potato Parcel the $50,000 in exchange for the 10% equity, but he would cut Alex’s royalty in half. He wanted $.50 for each potato. Mark asked why Alex would do that. Kevin said that he wasn’t finished. He said that after the 60 days, he would continue take take a dollar from every potato sold until hundred and $50,000 was paid back. He would then hire Riad at one of his actual companies since he said both of them knew that the Potato Parcel business was going to go to zero at some point. Kevin said that he was doing it for their parents because he was worried about them.

Robert said that he was also going to give them an offer. He said he would give them $50,000 in exchange for a 25% equity in the company. He said that they would sell a lot of potatoes and have fun at the same time. Maybe they would even expand into cucumbers. Lori said that they were both crazy. Lori told the entrepreneurs that they need to make a decision before both of the Sharks came back to earth. Robert and Kevin started bickering back-and-forth. Kevin said that his equity offer cause much less pain. Lori told them to think about it quickly before the Sharks stopped fighting over them.

Riad said that he would go with Robert’s deal if Robert would go with 17.5%. Lori asked what he thought of Kevin’s deal, and he said that he would take it if he could give both of them a dollar each. He felt loyal to Alex.. Riad said that he wanted to know what value each of the Sharks was planning on bringing to the business. Normally the question really pisses the sharks off. It seems like they were giddy from the concept of the Potato Parcel business. Robert said that he ran a multinational cyber security company, but he decided to quit that business and go full-time for the potato. Kevin insisted that every waking moment that he had he would be thinking about the business.

Riad decided to go with Kevin since his deal made the most sense. They would get the amount of equity they asked for, and Alex would still get to keep one dollar per potato. Kevin looked genuinely excited that he’d gotten the deal. He went up on stage to shake hands with the entrepreneurs, but they hugged him and jumped around in a circle. Everyone looked like they were having good feelings about the Potato Parcel deal. Let’s see how they did after their episode aired.

Potato Parcel Now in 2018 – The After Shark Tank Update 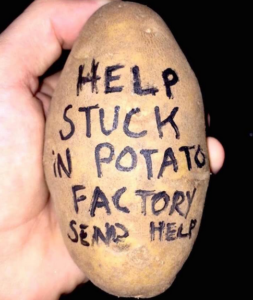 Since appearing on shark tank, Potato Parcel has gotten a number of imitators. Is now possible to send a brick or and eggplant through the mail via various other businesses. But Potato Parcel is still going strong. In March 2017, they got a bunch of publicity for sending potatoes to the NFL. They are now selling other products on their website including stickers, T-shirts, and even a bachelorette party pack. The company has high reviews on both its website and its Facebook page. Potato Parcel is truly a company of the Internet, and it knows its audience well. Despite its competition it will surely continue to succeed.