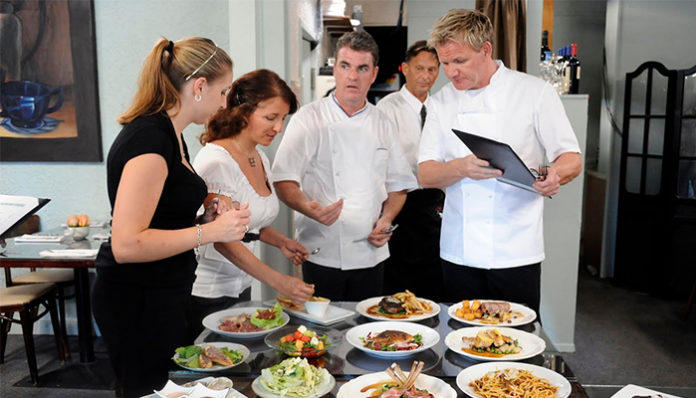 A French restaurant located in Lighthouse Point, Florida, Le Bistro is run by Andy Trousdale and his wife, Elin. A determined chef, he himself created the menu, which consisted of a variety of dishes from steak to seafood. Despite the many years of experience that he had under his belt, however, business began to decline by the early 2010’s. In need of some help, they decided to participate in the popular reality series, Kitchen Nightmares in 2011, starring none other than Gordan Ramsay himself.

Travelling to Southern Florida, Gordan Ramsay arrives at Le Bistro to give the owner, Andy Trousdale, a surprise visit during one of his cooking classes at the restaurant. Sitting down, he joins the rest of the class, as Andy continues to showcase his skills in front of the camera. Much to his dismay, however, things quickly go wrong- his skillet goes up in smoke, and later in flames. Despite his own slip-up, however, the owner is quick to blame the mishap on the celebrity chef who had allegedly “messed things up” for him.

Flabbergasted by his attitude, Gordan is left in shock for a few seconds, before the two decide to sit down to talk about his culinary background. Discussing the restaurant’s problems, Andy’s wife states that Le Bistro is “not appealing for the locals.” In response to this, however, her husband remains on the defensive. With that, Gordan tells Andy, their one, and only chef, to head back into the kitchen to show him what he’s capable of putting together.

The first thing to arrive at the table is the Duck Rillette. Giving it a taste, it’s obvious that Gordan is unimpressed with the dish as the cartilage and bone left in the dish might have “chipped his tooth.” With the item sent back to the kitchen, Andy’s growing discontent hardly a secret. Just a few moments later, however, the waiter takes the second dish to Gordan, a bone and lamb curry roll.

Trying to the roll, Gordan immediately notices the rubbery texture of the lamb, which leads him to shake his head. The second dish to be sent back to the kitchen, Andy does nothing to hide his growing contempt. Soon afterward, he goes out into the restaurant to talk with Gordan, during which he is told that his food is “old-fashioned” and “stuck in the 80’s.” Not taking well to his feedback, he once again goes on the defensive.

Despite Gordan’s intention to help Le Bistro, however, the owner seems unwilling to change his ways. Later staying for the dinner service, he is shocked to realize that Andy’s defensive behavior extends to the customers. With only one server handling all the tables, patrons eventually start to voice their concern- something that Gordan takes a note of. Unfazed, he spends the next few hours observing Andy’s way of working in the kitchen- which only proves to be disappointing.

Putting aside Andy’s dictatorship in the kitchen, food finally begins to arrive at the tables. What followed, however, was another disaster. When a customer’s steak turns out to be too raw, she requests for it to be cooked a little longer. To the surprise of everyone, however, the owner is unwilling to fix the piece of meat. Instead, he tells her to “make a different selection.” With that, it’s obvious to Gordan that he simply does not care at all about his customers.

Confronting him about the issues, the two eventually get into a heated argument in the kitchen. Despite trying his best to get through to the owner, however, his words continued to fall on deaf ears. Ultimately, it wasn’t until Gordan told everyone else to leave, that Andy stated he was willing to change his ways for the sake of the restaurant.

The following day, Gordan invites the owners onto a boat, where, to their surprise, a number of former customers have gathered to voice their opinion on Le Bistro. As everyone took turns speaking, one thing came up time and time again- the subpar quality of Le Bistro’s food.

Giving them another chance, Gordan puts together a tasty, profitable snapper special for their next dinner service. With two waiters, the orders quickly roll into the kitchen, where the chefs get to work. To everyone’s dismay, however, Andy is insistent on doing everything himself- something that has led to nothing but constant disaster in the past. Unsurprisingly, orders are soon backed up in the kitchen; by the one hour mark, not even one entree had made its way to a customer.

Wanting to prove a point, Gordan steps into the restaurant next door for some take-out. By the time he ordered, picked up, and returned to Le Bistro with the take-out however, food had still not come out at the French restaurant. Fortunately, though, his plan worked. Having proven his point, Andy eventually began to request help from his sous chef, Hendrick, which led orders to be completed at a much quicker pace. Met with nothing but compliments, the snapper is a big hit. While that may be the case, however, Le Bistro’s old menu continues to receive poor reviews from customers.

For the subsequent relaunch, the entire restaurant receives a much-needed makeover from Gordan, which includes a new sign, color scheme, comfy chairs and of course, a new menu. Among some of the new dishes are fresh oysters, steamed mussels, and local snappers. Despite being a little apprehensive, however, Andy, for the first time, appears to be welcoming of the change.

As it turned out, the relaunch ended up being a huge success. Unlike before, food dishes got out quickly and were met by rave reviews by customers at the tables. Not only that, but the owner had also seemed to embrace Le Bistro’s new identity by the end of the episode.

After a while, Gordan Ramsay returns to Southern Florida to revisit Le Bistro. To his pleasant surprise, the restaurant seems to be doing well, with many patrons enjoying their dishes. At one point, Andy even prepared lunch for the celebrity chef, which he thought was delicious.

As of 2017, Le Bistro is still operating in Lighthouse Point, Florida. Of course, Andy has also been continuing his cooking classes at the restaurant (which as you may recall, Gordan had stumbled upon during his first visit).

Today, the French restaurant boasts a four-star rating on Yelp. Looking at the reviews, many customers have complimented their dishes. In fact, many have stated that they cannot wait to go back!