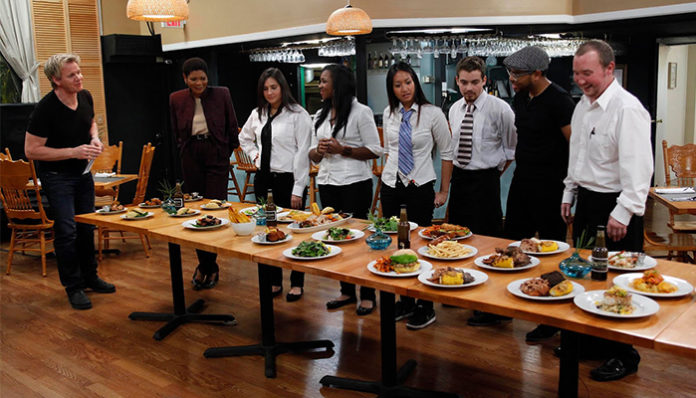 Located in Pasadena, California, Kingston Cafe offers customers a wide array of authentic Caribbean dishes. Owned by Dr. Ina Morris, who also happens to be a radiologist, the eatery has been operating for more than two decades. Established in 1992, the restaurant provides both on-site dinings as well as catering services. Despite this, however, Morris’ inability to listen to her staff, including her son Keone who works as the cafe manager, hinders the cafe’s success. In seek of professional guidance, they eventually decide o seek help from one of the most famous chefs in America- Gordon Ramsay.

Entering Kingston Cafe, Gordon immediately takes note of the establishment’s dull entrance. Incredibly average, he comments that one could easily mistake the restaurant for another house. Making his way inside, he is quickly greeted by the owner, who is happy to finally meet the culinary star. Following introductions, they are quick to delve into the main purpose of his visit- the state of the restaurant. Just a few minutes into the discussion, however, something is blatantly clear; the owner micromanages every single aspect of the diner- something that Gordan quickly realizes, is hurting the business.

Eventually ready to try some food, the chef sits down to make his order. Talking to the waiter, he decides to taste a few dishes; more specifically the Jamaican Patties, the Jerk Chicken and the Oxtail Stew. Moments later, the first item arrives- the Jamaican Patties. Taking a bite, he immediately comments that it is both “soggy” and “gross”. Unimpressed, he dish soon makes its way back to the kitchen. As if on cue, the second item arrives in front of Gordon, the Jerk Chicken.

Hardly an improvement over the patties, he critiques that the meat is overcooked and dry- much to the dismay of the owner. Next, the Oxtail stew arrives. Barely lukewarm upon arrival, Gordan could only shake his head as the bland dish is taken back into the kitchen.

Disappointed at his meal, Gordan calls a meeting with the staff, during which he confronts them about the cafe’s “soulless food”. Despite the bad taste that it has left in his mouth, the celebrity chef eventually returns to the restaurant to observe how it performs during dinner service. As the first orders come into the kitchen, a small, complimentary salad, makes its way to the customers. To Gordan’s dismay, however, they are served in small, martini cups, which leads it to be extremely soggy.

Stepping in to make a change, Gordan tells the staff to re-prepare the salads in bowls. But that does little as the owner continues to micromanage every aspect of the kitchen. Out in the restaurant, customers are also, unhappy with the Jamaican food. Doing some investigating, the chef soon discovers the Jerk chicken- a batch that has been left out since they were prepared yesterday. As the owner’s son, Keone looks on, everything that’s happening only reconfirms his concerns about the restaurant.

Called upon by his mother, the two have a heated discussion about Gordan’s comments. Frustrated by her stubbornness, Keone questions why they are unable to cook the dishes fresh; to this, she simply replies that “Jamaican food cannot be cooked fresh every day.” Back in the kitchen, Gordan finds something else that stirs him up- much of the ingredients are frozen and contained in plastic bags.

The next morning, Gordan visits the owner at her office for a much needed face-to-face talk. When asked how much she has invested in Kingston Cafe, she tells him that she has spent over $300,000 over the past three years, just to maintain it. Ending in tears, Morris eventually overcomes her reluctance to ask for help. With that, Gordan goes to talk to her son, Keone, who seems to be in constant competition with his mother. Following the breakthrough conversation, however, he seems more willing to work with her on the cafe.

With all that done, Gordan organizes a barbecue on the patio for the following dinner service. Over the next couple of hours, the restaurant begins to fill up in patrons. While Keone is overseeing the barbecue, however, the rest of the staff falls back to their previous habits with frozen food and plastic bags. Before long, the kitchen becomes overwhelmed with regular orders, which leads customers to the restaurant to wait longer than necessary for their food.

After what seemed like an eternity, customers in the diner finally receive their food. Unsatisfied with the rough texture of the meat, however, they ask the server to send it back to the kitchen. In response, Gordan jumps into action, putting together an entree of barbecued salmon and corn, which receives rave reviews from those at the table.

At the end of the night, everyone gathers to talk about the barbecue service on the patio, which was a major success (in contrast to the indoor restaurant). After a brief discussion, Gordan heads back into the kitchen to dispose of an alleged “eyesore”. While the staff ponders what he may be talking about, he comes back out wheeling out a mountain of plastic bags with frozen food. Despite being a major step in the right direction, however, it was hard to take for Dr. Morris, who saw the bags as dollar signs.

The next day, the celebrity chef has more surprises for the staff- a brand new color scheme for the restaurant, inspired by the Caribbean. Not only that, but the cafe’s placemats, dishes, and chairs have all been replaced with modern equivalents. Incredibly grateful, the owner embraces Gordan for a much-needed hug.

But of course, that’s not all; he had also replaced the original, uninspired menu with an entirely new menu. A taste of Jamaica, some of the new foods included a barbecue platter, kingfish, skirt steak, among others.

Kingston Cafe’s Now in 2018 – The After Kitchen Nightmares Update

Following his initial visit, Gordan returns to the Kingston Cafe in 2012 to discover that the owner has rehired the entire staff. Not only that but her son Keone is also no longer involved with the restaurant as he has shifted his focus back towards his education. Tasting their new food, the culinary star seems to be satisfied, having commented that it’s both “fresh and delicious.”

In November 2012, the cafe closed- fortunately, not permanently. Kingston Cafe later reopened in the fall of 2013, with a new dance floor, as well as an extended menu. Looking at Yelp, it seems that most of their customers have been satisfied with their dine-in experience at the restaurant. As of 2017, they are open for dinner service on Thursdays, Fridays, and Saturdays.