Stepping into the Shark Tank are two entrepreneurs. These two believe that they have created a new generation of nutritional supplements. Meet Will, from sunny San Diego, and Ron, from beautiful Santa Barbara. The two are Ora Organic, and they are seeking an investment of $375,000 in exchange for 5% in their company. Will steps behind a screen to pull out a comically-sized pill. Have the Sharks ever thought about how their supplements are made, like the actual stuff in the capsule? Hold onto your kombucha, because you wouldn’t believe some of the stuff that’s used to make “nutritional” supplements.

Will asks Chef Ron to break things down. Ron steps behind a table, full of ingredients, and pulls out an orange. Vitamin C comes from oranges, right? Wrong. It comes from corn extract processed with acetone. The same stuff as nail polish remover. Ron pours some of it into a pot. What about iron? Iron is formed with sulfuric acid, so Ron mixes that in as well. Protein – meat, right? Wrong, as it’s synthetic growth hormone. Ron dumps a bunch of syringes into the pot. What about those infamous Omega-3 fatty acids? Those… those come from the fish guts. Ron takes out a Finding Nemo stuffed toy and squirts out some juices into the pot. And, dare he ask, what about Vitamin D? Bring out the lamb!

Will brings out his cat, decorated with plastic ears that make him look like a lamb. But fear not, for Ron will not put the cat – he means lamb – in the pot. Vitamin D comes from the grease secreted by a sheep’s oil glands. All of the Sharks are disgusted. Ron asks the Sharks – would they rather consume that, or their product instead? Will pushes a screen aside to reveal a fresh arrangement of fruits and vegetables. Now, things are all about Ora Organic.

Ora comes from plants, just like the food that you eat, and not from artificial chemicals. Just good, old-fashioned food. And just because it’s healthy, it doesn’t mean it tastes like rabbit food. That’s why Chef Ron is here. So, would the Sharks rather have artificial supplements or Ora Organic’s delicious, chef-designed nutrients from real and organic food? Ron pushes up a serving cart with plates for each of the Sharks. On the menu is Ora Organic’s pineapple spray. This goes right into the mouth, which has Omega-3. Each dose delivers 600 milligrams, and there’s nothing fishy about it because they use microalgae.

The second course, complete with a strawberry garnish, is the multivitamin. All of the Sharks love it, and Ron explains that it has over 25 different fruits and “superfruits,” which are fruits that are loaded with more vitamin value than your typical fruit. Robert asks what the last course is, and Ron says that it is the super-food protein. They have used it in a baking recipe and used it to create an organic and vegan coconut truffle. Lori then asks if they are actually selling it for people to eat to get their vitamins; while Ora Organic is not selling the truffle right now, they will be soon. 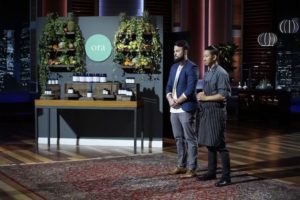 Kevin then says that he will give the truffle a 9.26. Robert asks to clarify what is all being sold, and Ron says that currently, they are selling the Omega-3 spray, a multivitamin powder, and multivitamin capsule, as well as a superfood protein powder. So, Robert would use those to create the delicious items that they allowed the Sharks to sample. Robert then asks for Ron to tell the Sharks more about himself. Ron is a chef, as they can obviously see by his apron. Growing up, his parents owned and operated six restaurants, so he’s been a foodie all his life. However, his uncle died of a heart attack when he was 55, and his grandfather had a triple bypass. None of these problems had occurred until they moved to the United States. They were originally from Taiwan.

Ron was able to put two and two together and found it was the diet. He quit his job doing tech consulting and started to focus more on healthy living. Robert asks how Ron met Will, and Will explains that they were freshman-year roommates at U.C. Berkeley. Professionally, he comes from a background of strategy and operations consulting, as well as a background in life sciences. Robert asks if they have customers today, and to date, in under 10 months, they have sold about $415,000. They are selling primarily online, which is their only channel. Mark asks what they sold last month, and Will says that in the first seven months, they sold like gangbusters and started selling out of the product. They went from $0 to $65,000 a month in sales.

They only made a limited amount, sold out, and Lori probes for what happened next. Could they not manufacture or setup wait-list ordering? Will continues – they brought in a little bit of money on a convertible note. They raised $150,000 at a $2.2 million post-money valuation. Robert then says that there a lot of people doing the supplements, and he thought that they had a food-based product with a different delivery or online something. It’s not something that he would use, and he’s not the Shark, so Robert is the first one out of the deal. 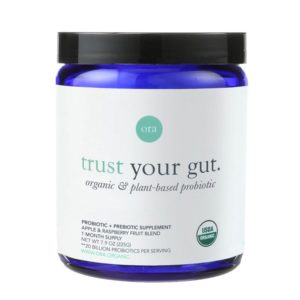 Daymond then says that $415,000 in 10 months is great, but they are valuing their company at $7.5 million dollars. So why would a Shark jump in at 5% for a $375,000 investment? The fast growth is the primary reason. There is a large industry, but all of the Sharks understand the industry. In fact, when a potential entrepreneur presents “the size of the industry” as information, that’s an indicator that they actually don’t have enough information. That number is ridiculous, and they’re too unrealistic. Daymond is the second Shark out of the deal.

Lori then says that she is their customer, as she is into healthy, natural and organic. She’s up-to-date on a lot of those things. However, if she were to walk down the aisle of Whole Foods market, the bottle would not catch her eye. She does not feel like the product will work for them as it sits currently. She feels that the writing on the package is too small. She has to be drawn to the bottle to pay attention to it. She is concerned about the marketing, and it would be too much work for her. She is out.

Mark says that when he heard Ron say he was a chef, he expected them to create foods. And rather than sell to retail, they could sell services like Plated and Blue Apron. Being dependent on just being a brand and trusting that you’re unique is too much of a stretch. He decides to take himself out of the deal, leaving just Kevin interested in investing. The deal is challenged by the competition, he says. He loves that it’s on trend and that they have sales. However, getting a share is going to be really hard, and he feels that the evaluation at $7.5 million is extreme. There’s nothing wrong with reaching for the stars. He is a Shark and not just any old investor, which is great news for Ron and Will. 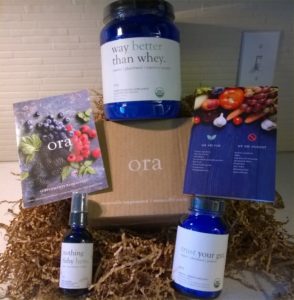 Kevin proposes an offer – $375,000, the amount they asked for, but he wants 20% of the company. Ron and Will look to be taken aback by the offer, but they regain composure as the show cuts away to commercial. Kevin has effectively quartered their company’s valuation. He’s not interested in negotiating, as this is not an easy deal. He can offer that or they can pass on the deal. Ron starts by saying that they do not want to accept a down-round, which is a desperate round of fundraising when the company is figuratively down on their luck. Kevin says that it’s an up-round.

In terms of the valuation, because of the traction that they’ve seen, they would consider a counter that would drop their evaluation down to $5 million. Kevin then says that he can be flexible in one way – he will go back to the round of fundraising that Ora Organic actually had a trigger price of $2.2 million, and change his offer. He will offer $375,000 in exchange for 17% ownership. That is the absolute match. If they want to bring them into the $2.2 million round valuation, he will uphold that offer and not budge. Will and Ron would love to find a way to bring Kevin on board, but as they look at where their company is, the projections for the next 12 months appear promising. Kevin then says that he has never seen a forecast that he hasn’t liked, as they’re always fantastic. Then he deals with the reality of his entrepreneurs with how tough it is to grow a business.

In the end, Ron and Will pass up the deal with Kevin. They feel that the upside is too big for them, and just like that, they leave the Shark Tank having past up a big offer from Mr. Wonderful himself.

Since appearing on Shark Tank, not much has changed for Ora Organic. They still have a limited supply of products available; namely, the plant-based Omega-3 spray, organic Probiotics with prebiotics powder, organic protein powder, organic turmeric curcumin, and vegan Vitamin D. All of these are advertised to be fully FDA-compliant and insulated with a 100% money back guarantee, no questions asked.

As someone who has taken lots of supplements but never taken an Ora Organic, I would be willing to try it. However, there are other brands available that have a bigger product mix, and those products have also been around longer. While Ora Organic isn’t doing anything new, I believe that Chef Ron could be the biggest asset in creating meal plans that you don’t see from other companies that you might find at your local GNC. With that said, people seem to be loving Ora Organic, as numerous of their products from Amazon have more than 160 reviews and at least a 4-star rating.