Amelia Cosgrove, who is a product designer at Pump Studios, came up with the idea for Popup Play with her husband Bryan Thomas. The pair developed the software for helping kids to be able to bring their ultimate playhouse to life, and they won $4,000 at SXSW. The pair took their idea to Kickstarter, and they were able to get their project funded. Read on below to find out if the Sharks want to put money into Popup Play. 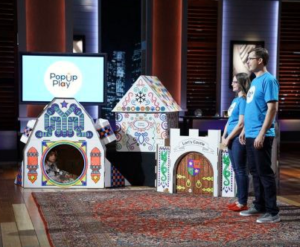 Amelia Cosgrove and Bryan Thomas walked into the Shark Tank. They introduced themselves to the Sharks. They said that they were from Austin Texas and they were the co-founders of Popup Play. They requested $250,000 in exchange for six percent of their company. They stood in front of what looked like handmade and hand-colored cardboard forts.

Bryan said that some of his most memorable experiences of being a child were playing with forts or other toys that he made himself. He insisted that children do things differently today. They spend a lot more time on screens, idly passing the time. Kids nowadays consume more media then they create things for themselves. Amelia said that with Popup Play, they blend modern technology with timeless play.

Amelia said that the whole experience was a new engaging thing for kids. They had a tablet application called the Popup Play Build Lab. Children can choose from different options such as a rocket ship, a castle, or a gingerbread house. They can place structural components such as windows or towers and then decorate with large-scale graphics. Once the design was completed, the children would press the submit button and their creation would arrive within days of ordering.

Amelia pretended to ring the doorbell on the castle, and a bunch of children popped out. She said that children would be able to play make-believe or color in the giant life-sized coloring books that they create themselves. Bryan told the Sharks that both parents and children love Popup play, but they also had a much larger opportunity. He said that they had significant inbound interest from large brands that want to solve the problem of helping adults engage with their kids.

Bryan said that they already had a partnership with one of the world’s largest auto brands, and a pipeline with over 75 companies. Amelia ended the presentation by requesting that the Sharks join in on the fun. She said it was time to imagine, create, and play.

Once Amelia and Bryan finished, they thanked their helper children for coming and high-fived them as they left the stage. Chris Sacca asked the couple which part that they were best at. He wanted to know what their core competency was. Bryan let them know that they were a software company at heart. He told the Sharks that Popup Play sees themselves as carrying out the custom on-demand design and manufacturing of products. Barbara wants to know what their relationship was, and Bryan told her that they were married. She asked if they had children, and Amelia told her that while they didn’t, Popup Play was their baby.

Mark said he knew how that went. Kevin asked them to walk them through an average order. He wants to see some numbers. Bryan stated that each order, no matter what the child’s designs, is a $99 price point. They charge a flat $10 fee for the delivery of each item. Barbara asked how many they had sold so far, and Bryan told her that the past 11 months they’ve done $330,000 in revenue. He told the Sharks that that number was comprised of two components – consumer revenue, and a deal with a large auto manufacturing company that was priced at $300,000. Kevin pointed out that that was almost all of their revenue.

He pointed out that they’ve only sold $30,000 outside of that large company. Mark and Kevin both said that that wasn’t good news at all. Kevin said that his main concern was about customer acquisition and scale. Mark wants to know how many downloads of their apps they’d had. Bryan told him that they’d had 2100. He asked them if they’d spent any money on advertising, and Bryan told him that they’d spent about 15,000. Mark asked if that money went directly to sales, and Bryan said that they’d also had a Kickstarter campaign the previous year.

Mark wants to know how much they’d raised from the Popup Play Kickstarter campaign, and Bryan told them about $15,000. Mark was starting to get a better understanding of the company. He asked them if they’d taken a turn in direction because they spend so much money to get so few sales. Bryan said that he was right. There is a much more lucrative opportunity for larger businesses. Mark said that while it might be more lucrative, it was much longer sales process and it was much more expensive to convert leads to sales.

Kevin said that he already had two deals in the same space. He said that it was always the same story – customer acquisition costs. Bryan wants to make sure that Kevin knew that they weren’t in the toy business. Bryan saw Popup Play as an on-demand design and manufacturing company. Kevin was starting to realize that they didn’t care about acquisition costs because the sales process had changed from targeting the direct customer to big businesses. He said he wasn’t sure if it was more lucrative because it was a longer sales process. Mark said he said all that already and was wondering where Kevin had been.

Kevin said that he was thinking about making the deal because he already had people in that age bracket that he’d sold to, but he said that it wasn’t clear if the husband-and-wife team knew what their customer acquisition cost was before he handed over the database. Kevin said that he wasn’t their Shark, and he went out. Bryan thanked him for his time.

Barbara said that she felt like she’d seen this before. Amelia said that there are products like expects, but not with the same experience of making it themselves. Barbara wants to know what the price range of those products was, Amelia said it was from $35-$90. Barbara said that she thought that the price was too high, and they had not yet proven their worth. She didn’t believe that Popup Play was a business yet. Barbara went out.

Mark Cuban wants to know how much money they’d raised so far. Bryan said that they raised $325,000 from companies like Tech Stars and Capital Factory. Chris wants to know what the valuation was at that time, and Brian told him it was based on a three-million-dollar valuation. Lori said that she thought it was a clever idea, but it was too early for an investment. She said that she wasn’t sure if they knew which direction they were going in, so she went out. Mark pointed out that they didn’t design the software intending to go into children’s castles.

Amelia said that the initial concept was toys, but they knew very early on that it could apply the things far beyond toys. Chris asked what they could make with the software, and Amelia said that it could be used to cut any sheet material, such as sheet metal, wood, fabric. Mark asked if they would be able to be programmed into mine craft as a mod at all, and the couple said that they love to. Chris asked if they thought it was a future possibility for kids to be able to make their Minecraft designs real-life through their software. Bryan said that they would be able to do that already if they had the deal in place.Mark said that he didn’t agree with their one-off sales strategy. He thought that they would be better off selling direct to consumer instead of dealing with large businesses. He said that it didn’t add up to an investment for him, so he went out. Bryan started to address his concerns, but Kevin pointed out that there was still one Shark left. The couple should be talking to Chris Sacca.

Chris said that right off the bat he thought that Popup Play was fun, which was something that the other soul-sucking capitalists in the Shark Tank didn’t consider. He thought it was a cool product, although he saw their growth is a little too slow. He wasn’t thrilled with their valuation since it was hiked up after other investors had gone in on it. He made them an offer at the same valuation that the other investors got. Amelia and Brian took a moment to think before accepting Chris’s offer. Let’s see how they did outside the Shark Tank. 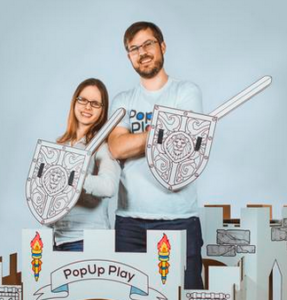 Since getting an investment on the Shark Tank, Popup Play announced that they would be forming Popup Tech, which was the B2B section of their business. Their website declares it to be the way that brands can help their customers create custom products with a turn around time of a week. Other than that announcement, the Popup Play website and social media sites have gone strangely silent. Their Facebook page has not seen any updates since June 30th, and their Twitter page is under construction. It only has two posts – the one announcing that they were under construction, and a retweet of Donald Trump. Perhaps they are waiting for the investment with Chris Sacca to complete before developing more children’s playhouses.