The Greek at the Harbor After Kitchen Nightmares – 2018 Update 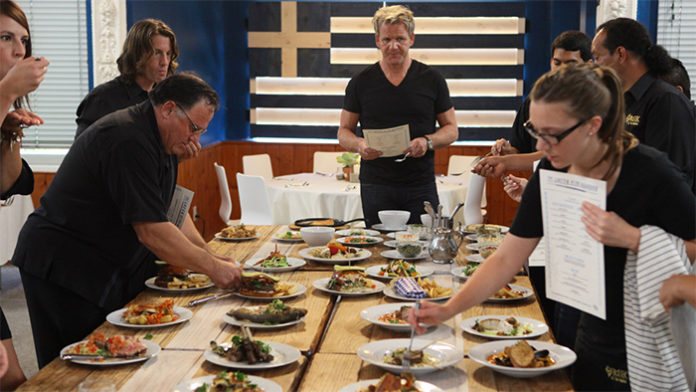 The Greek at the Harbor Before Kitchen Nightmares

A family-owned Mediterranean restaurant, The Greek at the Harbor was founded by Makis and Lynn Mikelatos in the summer of 1994. Their second business venture (their first being a food court stall in Centerpoint Mall in Oxnard), the eatery enjoyed much success in the late 90’s, though things eventually turned for the worst. By the early 2000’s, standards in the restaurant had dropped so low, that customers had slowed to a trickle. In attempts to salvage their restaurant, the owners ultimately choose to seek help from one of the best in the industry, Gordan Ramsay.

The Greek at the Harbor on Kitchen Nightmares

Arriving at the harbor, the celebrity chef is quick to notice the abundance of foot traffic. With that, he heads into the Greek restaurant, where is he is greeted by one of the owners, Lynn Mikelatos, at the front. Before long, he is introduced to the entire family, including husband Makis and son Darius.

With introductions out of the way, the group eventually sit down to discuss some of The Greek at the Harbor’s issues. Almost immediately, Gordan learns that the restaurant had started to go downhill in the last couple of years. Despite the fact that the owners have practically been living in the restaurant for the past months, their efforts have not paid off; instead, business has significantly winded down.

Time to taste their food, Gordan eventually sits down at one of the tables, where he is promptly greeted by a waiter. After glancing at the menu, the chef makes his order; a side of calamari, the hot and cold appetizer sampler, and the Moussaka (eggplant casserole). With that, Demetri, his server, returns to the kitchen to put his order in.

As he waits for his food to arrive, Gordan can’t help but notice the restaurant’s “hideous” decor- particularly, the chairs and the two disco balls hanging from the ceiling. Eventually, his appetizer, the calamari arrives, and his first impression is not a positive one. Incredibly greasy, things only go from bad to worse as he pops one into his mouth. Unpleased with its taste, he quickly asks the server to take it away.

Next, the Hot Mezze Platter arrives at his table. Despite its name, however, Gordan soon discovers that the meatballs are cold in the center. On top of that, the plate is covered in grease. Once again displeased, he asks the waiter to return the dish back into the kitchen.

Moments later, he is served the Beef Moussaka. Incredibly “dreadful”, Gordan can only do so much as shake his head. Curious to know who’s responsible for making the food, he asks for all of the chefs to come out into the dining area. As soon as everyone arrives, he is blunt to express his dissatisfaction with the food. In fact, he described it as being “the worse Greek food that [he’d] ever had in his entire life.”

Following an intensive discussion on the state of the restaurant, the staff prepares for the dinner service, as Gordan looks on. As customers begin to arrive, the celebrity chef begins an inspection of the kitchen. With his trained eye, it takes close to no time at all for him to realize that most, if not all of the items on the menu are pre-cooked in advance; in his words, “like a cafeteria.”

While the kitchen has no problem sending out orders at a timely pace (considering most were pre-cooked), Gordan is more than unimpressed by the owner’s lack of involvement behind the scenes. Wanting a better understanding of the situation, he goes to talk to the son about his father’s attitude in the restaurant. Unsurprisingly, he’s told that he is burnt out and tired of running the business.

Returning to the restaurant, it’s obvious that many customers are dissatisfied with their food. Plate after plate, orders are sent back to the kitchen. With that, Gordan takes matters into his own hands; he directly questions the owner about the issues at hand. To his dismay, however, he adamantly states that the food is good.

Despite everything that’s going on, Makis eventually heads back into his office, apathetic on what’s happening under his nose. With that, Gordan invites him for a talk outside, during which he interrogates the owner about the ongoing situation. Eventually, his son Darius also arrives to join in the discussion. To their surprise, however, the chef soon leaves the two to talk alone.

In seek of more answers, Gordan goes on to talk to his wife, Lynn. As she reveals more about their past, he learns that Makis’ son, Darius, has been reluctant to work at the restaurant for several years, since his college days. In fact, he’d exclaimed during his graduation party at the restaurant that he would “make something of his life by not working at the business”, something that was obviously hard for his parents to hear.

Confronting Darius about his previous proclamation, he reassures everyone, including his father, that he did not mean what he’d said. With the air cleared, he promises to give everything he has to the restaurant.

Shortly afterward, Gordan presents the restaurant with a much-needed makeover as well as a revamped menu. Despite a shaky start, they eventually have a successful relaunch, with many praises from the customers. To his pleasant surprise, Darius had also stepped into the role, as the person in charge. With his job complete, the celebrity chef bids everyone farewell as he leaves The Greek at Harbor.

The Greek at the Harbor After Kitchen Nightmares – 2018 Update

Today, the Greek restaurant continues to operate in Ventura, California, with its new decor and menu. With Darius leading the kitchen, things have improved significantly; in fact, his father Makis is considering stepping down altogether!

As far as online reviews go, the restaurant currently has a three and a half star rating on Yelp, which is a significant improvement from what they had previous to Gordan’s visit.