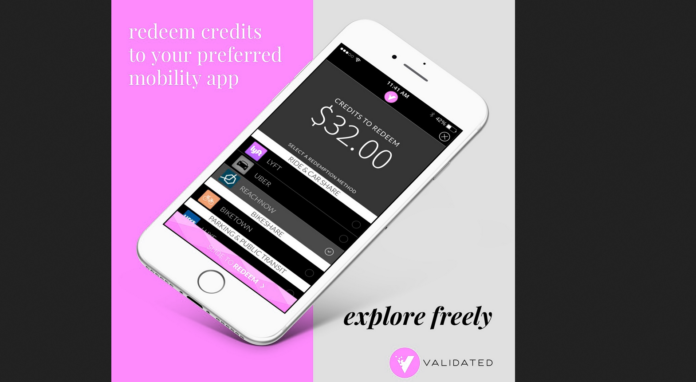 There are many different apps nowadays that rewards users for supporting businesses through cashback, or gift cards for watching ads, checking into certain stores, or uploading receipts. The entrepreneurs behind Validated – Ian, Tov, and Alex – saw this trend, and decided on a new twist. According to their interview on Heavy.com, they saw their system of rewarding customers for purchasing items in a store with free parking or transportation as a common sense alternative to a discount or promo code. Would the Sharks agree? Let’s take a look. 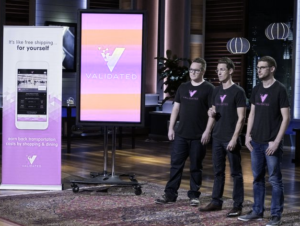 Ian Lyman, Tov Arneson, and Alex Wilhelm walked out onto the stage and assembled themselves before the Sharks. Mark Cuban said that they looked like Drew Carey triplets. All of them had the same boxy haircut, and square, nerdy glasses. Tov said that they were here on the Shark Tank to seek a $250,000 investment in their company, Validated. That investor would receive 8% of their business in return.

Ian started off the presentation by saying that there is a lot of costs to transportation, whether it’s parking or sudden surge pricing in a rideshare app. This had the effect of keeping customers away from their favorite shops, bars, and restaurants. Tov insisted there was another way. He said that those establishments would pay for parking. Their business was an app that allowed customers to earn free parking whenever they checked into restaurants and bars. Alex said to think of it like free shipping, but for yourself.

They would discover the businesses around the customers that would be willing to cover their transportation costs in exchange for being a customer. Users of the app could just tap the business in order to see what’s required to qualify for credits and how much they will validate. Once the user met that quota, they would swipe it and scan to complete validation. You can stack credits with multiple shops and restaurants. You could then redeem them to your preferred mode of transportation, whether that is an Uber or a parking garage for your vehicle. Ian said that it was a win-win situation that makes getting around less of a drag, while also boosting the bottom line for businesses. They ended the presentation by asking the Sharks which one of them want to get Validated.

Lori said that the proposition was interesting because it gets customers back into brick-and-mortar businesses easier. Alex said that’s just what they were trying to do. He said that business owners were essentially willing to do anything to get customers back into their stories. Barbara said that she was confused. She asked if she went into a store and spent $200 on a dress if they would give her free parking. Ian explained that she would get credits for parking her car. Barbara asked if it would be enough credits to park her car for three hours and shop. Ian said that it depended on the merchant. They let merchants decide what their spending threshold would be.

Barbara said that it seemed vague, which would be that motivating to the customer because it would be confusing. Ian said that the exciting part was that the credit stack. He illustrates a day where someone would go out to lunch, go shopping for shoes, and then catch a movie. They would be Validated as they went, and by the end, they would be able to pay for their entire trip.

Mark asked them a tech question. He wants to know what they were scanning. Tov said that they were scanning a QR code. Mark asked where the QR code was. Tov stated that they would have to get it scanned by the merchant behind the counter. The customer would ask to get Validated. Mark asked him what they would consider the value of a point to be. Ian said that one credit equaled a dollar. Chris told them that they were going about it the wrong way. He said that Uber worked because it was just “push a button, I get a ride.” Validated should be similar to that. He said that once they start integrating different public transportation systems, they would make their product unnecessarily complex.

Mark said that their problem was bigger than that. He said that they hold the credits, so they would be the bank. They would also have to convince people that the currency was valuable, so they were also the Federal Reserve. Kevin said that it was a nightmare. He said that Uber was a limited option because everyone wasn’t going to use Uber. Chris scoffed and sarcastically said that 80% of the market is a limited option. Mark held his ground, insisting that the chances were the customers didn’t drive to the mall in an Uber.

Tov pandered to both of them, stating that the vast majority of people wanted to use an Uber, but it was only 5% of the “transportation pie.” Chris insisted that it was a huge slice of their target market – people with a smartphone who look at their advertisers. He said that they weren’t going to be looking at early retirees who wanted to get to the early bird dinner. Mark said that didn’t matter. Validated was attempting to be another bank and the Federal Reserve. He said that it was extremely complicated, and they were going to be ongoing bugs forever essentially. That would make it an expensive investment. Mark went out for all of those reasons.

Barbara said that the business model sounded super complicated, and she wasn’t seeing a need for it. She said that she was definitely out. Alex said that there was a need for it because retailers were seeing everyone moved to online shopping. He said that 33% of people that bought an item online would return it, which would create an endless volley. Retailers wanted to see people come into the store. Before he could finish, Kevin cut in. Kevin said that he hated the business. He saw it going to zero very quickly, and he was surprised that they had pivoted into this nightmare from another business. He warned them to pivot right out of it. Kevin went out, calling the business a dog.

Lori said that she could see the merits of Validated. She said that she could really see restaurants loving it. She said that she wasn’t sure how many people would actually use the app, so she went out. The entrepreneurs thanked her. Chris spoke Up Next, stating that he thought that it was really smart in the beginning. They were driving people to the physical businesses. Unfortunately, he said that they lost him with each additional slide. He saw it as too complicated.

The user experience sucks, and they were trying to accommodate each individual transportation choice. The moment they really lost him though was when they showed him the QR code. Chris called QR codes the herpes of mobile technology. He said that it should really be as simple as buying some stuff and getting a ride. He didn’t believe that they were going to make it, so Chris Sacca was out. The entrepreneurs thanked the Sharks. Chris advised them to light the QR codes on fire. Mark pointed out that they didn’t want to be a bank, they wanted to be a connection. With that, the entrepreneurs left the stage.

Validated in 2018 – The After Shark Tank Update

Since failing to get a deal on Shark Tank, Validated has seen an impressive amount of expansion. They started off their program with just two cities on the West Coast, and now they are in many major cities such as New York City, San Francisco, Las Vegas, Boston, and Chicago. You can check out their full list of cities on their website. Validated also achieved their goal of connecting with more services. They support Uber, Lyft, Biketown, PayByPhone, Luxe, and ReachNow. They also made their interface way easier for their users. After listening to the Sharks and user opinions, the entrepreneurs came up with Validated Mobility Rewards. It got rid of the QR codes and allowed users to rack up credits by scanning in their receipt.  In their blog, they list out all of the individual Shark’s concerns and address them one by one.