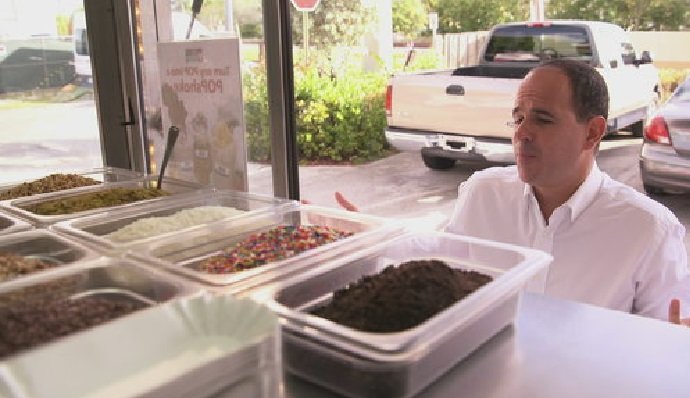 Hip Pops Before The Profit

In July 2017, Marcus Lemonis visited Tony Fellows, the entrepreneur behind Hip Pops, a mobile dessert truck business that supplies South Florida with hand-crafted gelato bars. The Hip Pops truck was performing well, making half-a-million in sales a year, with an incredible profit margin, but Tony also had a plan to franchise the Hip Pops model, and that was a far less lucrative side of the business.

Tony had been in business since 2012, but he was losing hundreds of thousands of dollars a year with his franchising program, and so far he had only managed to snag one customer for that side of things. His organizational skills and commitment to the business were stopping him from realizing the full potential of the Hip Pops business, and he was looking for a partner like Marcus to help him complete the franchising side of things, and turn the Hip Pops brand into an attractive investment for potential franchisees.

Hip Pops on The Profit

When Marcus Lemonis first visited Tony in Fort Lauderdale, Florida, he knew that the Hip Pop business had the potential to be a goldmine, and was overwhelmingly positive about making a deal. The gelato bars were cheap and easy to make, and the profit margins were good, it was all about making sure that the business was organized enough to operate smoothly, and then formulate a clear business plan to sell as a franchise. But as Marcus got to know Tony Fellows better, he found the whole experience more and more frustrating.

Tony had been in the frozen desserts business for several years but had then left it to sell real estate. After the financial collapse of 2008, Tony had taken big financial losses, and in 2012 he returned to his roots and purchased the first Hip Pops truck. When Marcus sampled the Hip Pops desserts he was highly impressed, declaring them to be ‘delicious’ and ‘Out of this World’, he learned that although they sold for $5 each, they only cost $1 to make, including the dip and toppings, and he thought the 80% profit margin was ‘Exceptional’, but he also had concerns about Tony’s financial expenditure on the truck.

Tony revealed that all-together the truck had cost $125,000 to equip, although Marcus believed that $75,000 would have been a more realistic cost. He inquired about the franchising side of things and learned that Tony had at times pitched the idea of a Hip Pops franchise to more than 300 people at a time, but so far he had only made one sale, with a franchise in far distant Dubai.

Next, Marcus visited the kitchen, which at first glance was an impressive sight, ‘Just like a real kitchen’ remarked Marcus. He made a batch of gelato bars with Annette and Yolanda, who ran the kitchen, but he soon found out that the blast freezer, which was vital to the production of the bars, was faulty. The freezer defrosted every six hours, and Marcus later spoke to Annette and Yolanda alone to find out what Tony was like as a boss.

The Hip Pops employees admitted that Tony was usually absent from the kitchen, and when Marcus dug a little deeper, he soon found out that the kitchen was highly disorganized. There was no inventory, the place was filled with unused clutter, and the whole operation hinged on a freezer that could pack up at any moment. Even more amazing was the fact that the freezer would only cost $7,500 to replace, which although a lot, was nothing compared to the $1,000 to $2,500 in sales that the truck could make in one day of business.

Marcus then met Freda, the Hip Pops book-keeper, who also happened to be Tony’s mom. ‘Do you get paid?’ Marcus asked, ‘In kisses’ Freda replied, but in fact, she had a big stake in the business. Freda and Tony’s dad Ed had loaned $350,000 to Tony to launch Hip Pops, and the debt was gradually being repaid, but at a slow pace. Tony told Marcus that he had recently become divorced and that his ex-wife, Niva, kept the Hip Pops pages on social media updated. ‘So your ex-wife is an employee?’ asked Marcus, and Tony confirmed she was, but that wasn’t quite the truth of the matter.

Marcus then set up a meeting with Tony and his parents, where he learned that the franchising operation had eaten about $250,000 of the companies profits in the last year, and although there were big problems with organization and the work-flow process, Marcus was prepared to make an offer if he had full control over the changes to be made.

Marcus offered a $100,000 investment in exchange for 50% of the business, and Marcus slightly reluctantly agreed. Marcus told Tony that although he had been giving himself a $100,000 salary, he wouldn’t be living a life of luxury now until the company was turning a profit, and the first thing to do was to replace the faulty blast freezer in the kitchen. In order to fund the extra $7,500 to buy a new one, Marcus told Tony to sell his $10,000 watch, pointing out that such a luxury item wasn’t worth anything compared to the future success of the business, and Tony reluctantly agreed to sell it.

Already doubting Tony’s commitment to the business, Marcus arranged to meet him at the truck the following day, but Tony was late, telling Marcus when he eventually arrived that he didn’t work the truck. Marcus had also tasked Tony with organizing an inventory in the kitchen, but once again Tony failed to get things together, instead just tidying things up a bit, but not doing anything to get things properly business-like. A further bombshell revelation came for Marcus when Tony admitted that ex-wife Niva was actually a 25% owner of the business, so Marcus arranged another meeting between the three of them, but his frustration at Tony’s lack of commitment and evasive attitude was already beginning to show.

When Marcus, Tony, and Niva met, she agreed that she would reduce her stake in the business to only 20%, with Marcus and Tony both taking 40% each, and Marcus attempted to move on with a positive plan to turn things around. He took Niva and Tony to another one of his business interests, ‘Mr. Green Tea’, to see how a properly organized kitchen with an ordered work-flow should operate, and although Tony seemed positive, he still failed to implement a similar system in his own kitchen.

Marcus had also arranged that Hip Pops should appear at the opening of the new T-Mobile headquarters, and tasked Tony with coming up with a new menu item to impress their new client, but Tony once again failed to produce anything of any real value, and finally Marcus began to realize that Tony was consistently not engaging with the business, and had no follow-through with any of his ideas.

After some consideration, Marcus eventually came to the decision that he wasn’t prepared to go into business with Tony, revealing that Tony’s lack of commitment was simply too much of a problem for him, and although he saw big potential for the Hip Pops business in the future, he didn’t want to be a part of it.

Throughout the entire episode of the Profit at Hip Pops, Marcus Lemonis seemed like a car moving at top-speed, while Tony Fellows was crawling along in the slow-lane by comparison. The contrast between Marcus’ enthusiasm and drive, and Tony’s intermittent interest in his own business couldn’t have been more evident, and although Marcus left on relatively good terms, it was fairly clear that Tony wasn’t really interested in a partner, even one who could potentially help his business as much as Marcus Lemonis could.

Immediately after the program aired, Tony Fellows issued a statement on the Hip Pops Facebook page that confirmed no deal had been made, but also stating that he had learned a lot about himself, and being an entrepreneur. He also expressed his gratitude to Marcus for all the advice and confirmed that he was still passionate about the business, even if the viewer was left with the impression that he was anything but that.

Tony has implemented some of Marcus’ suggestions, such as diversifying his product line to include chocolate-covered bananas, and he’s still offering franchise opportunities, but so far the offer hasn’t been taken up by any more investors. The Hip Pops website provides a full schedule of where the Hip Pops truck will be in the upcoming month, and customer reviews of the Hip Pops products on Yelp are overwhelmingly positive. There’s no doubt that Tony Fellows has a great business on the mobile and customer-facing end of things, but as for that franchise opportunity, it looks like Tony has a lot more work to do before that shows the promise that Marcus Lemonis saw in it.