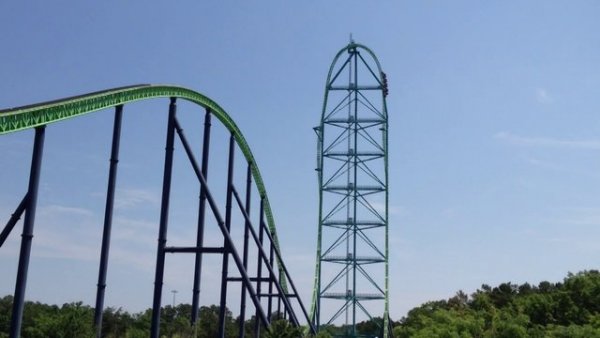 How bad is your fear of heights? As time goes on and technology advances, roller coasters become bigger, badder, and scarier. They’re the perfect ride for thrillseekers, and a great way to push the laws of physics to the human limits. Roller coasters are found all over the world, and this list contains some of the highest roller coasters that have been built. Most of them are fairly safe with few issues, although not everyone has a perfect safety record. Read on more to find out about the tallest, and possibly scariest by extension, roller coasters.

The Intimidator 305 is a steel roller coaster found in the Kings Dominion amusement park in Doswell, Virginia. The ride was manufactured by a Swiss company called Intamin. The ride opened in April of 2010, and is found in the Safari Village section, near the Anaconda ride. Riders reach a peak of 305 feet before dropping 300 feet and reaching a maximum speed of 90 miles per hour on the ride’s 85-degree drop.

The ride is the second Giga Coaster to ever be built in the United States, where the first was the Millennium Force in Cedar Point, Ohio. The Intimidator 305 cost more than $25 million to build, but is the tallest structure in the park, beating out the Eiffel Tower Replica. The ride is capable of handling more than 1,350 riders per hour.

The Leviathan is a steel roller coaster located up north in Canada’s Wonderland in Vaughan, Ontario. Is was the first Giga roller coaster designed by Bolliger & Mabillard, and drops riders a total of 306 feet from the highest point of 306 feet. Riders curve out in a tunnel after reaching a maximum speed of 92 miles per hour, of 148 kilometers per hour. The ride was opened in May of 2012 and cost more than USD$28 million to build. The ride remains one of the park’s most popular attractions and has placed in the top 8 for the previous four years of the Golden Ticket Awards’ Top Steel Roller Coasters Category.

One of the best roller coasters on this list, in my opinion, the Millennium Force was opened in Cedar Point during the millennium year of 2000. The ride broke six world records when it was opened, and created the Giga coaster category, which is a category for roller coasters over 300 feet. It lost out two categories to the Steel Dragon 2000, but still remains a force to be reckoned with. The coaster began construction in 1999 and cost $25 million to build. Riders drop 300 feet total from a height of 310 feet, and reach a maximum speed of 93 miles per hour. They also undergo an acceleration of 4.5 G-force.

The Millennium Force is a permanent fixture in the Cedar Point skyline, and recently underwent maintenance to reduce the chain lift time. The ride is frequently lit up with lighting, and even has a place in the Luminosity series of shows that Cedar Point hosts every summer.

The Steel Dragon 2000 is a steel roller coaster located in the Nagashima Spa Land amusement park in the Mie Prefecture of Japan. As noted in its name, the roller coaster was built in 2000 and cost more than $52 million to build. Riders drop a total of 307 feet from the ride’s 318-foot height, and reach a total speed of 95 miles per hour. The drop itself is 68 degrees. The roller coaster required extra steel to build, mostly for earthquake prevention. This contributed to more than half of the roller coaster’s cost, including the steel to make the two tunnels.

There has only been one incident with the Steel Dragon 2000, which a very scary one – in 2003, a sheared axle sent one of the wheels on the train flying loose. A passenger suffered a back injury, and another man in a nearby swimming pool was hit in the hip with the foot-long, 30-pound wheel. The ride was subsequently closed for three years.

The fury 325 is a steel roller coaster found at the Carowinds amusement park, which is in North Carolina. Riders drop a total of 320 feet from the ride’s 325 foot highest point and reach a speed of 95 miles per hour. The ride cost more than $30 million to build and was only built in 2015. The ride is the park’s most thrilling ride to date, and also has a line built to handle a queue time of more than five hours. Riders drop at an 81-degree angle, and the ride clocks in at just over three minutes.

The fury 325 broke numerous records when it opened in 2015, including the world’s tallest Giga coaster, the fastest Giga coaster, and the tallest coaster built by Bolinger and Mabillard. For the 2016 and 2017 seasons, it won the number one spot in the Golden Ticket Awards’ Top Steel Roller Coaster category.

The Red Force is a new roller coaster, found in the Ferrari Land theme park in Salou, Tarragona, Spain. Riders accelerate up to a height of 367.3 feet, reaching a total velocity of 111.8 miles per hour, before dropping down 360 feet. The ride only lasts for 25 seconds, which is 5 seconds shorter than the second shortest ride on this list, the Top Thrill Dragster. The Red Force was built recently in 2011, so not much is known about it yet. However, it is capable of handling more than 1,200 riders per hour and is by Intamin, which is a famous Swiss company that has built more than half the rides found on this list.

Tower of Terror II is a roller coaster found in the Dreamworld Theme Park in Queensland, Australia. The ride opened in 1997 and was the first to reach more than 100 miles per hour, although this would later be broken by Superman: Escape from Krypton. Riders fall more than 355 feet from the ride’s 377 height drop and reach a maximum of 100 miles per hour, or 160.9 kilometers per hour. The ride cost more than $13 million to make, but still remains the most popular ride in the park.

Superman: Escape from Krypton is a refurbishment of the original Superman: The Escape Ride. This roller coaster is found at the Six Flags Magic Kingdom in California. The ride once held the title of the tallest roller coaster in the world but has since lost it to other speeds. Still, riders go up to a height of 415 feet before dropping down 328.1 feet to 104 miles per hour. The ride is one of the most popular at the Magic Kingdom and can handle more than 1,050 riders per hour.

The roller coaster was closed down for the entirety of the 2011 season. The ride has quite a history and has been fully repainted and refurbished. New carts were installed. It has been open since 1997 and still has three records including the being a Top 3 tallest structure, Top 5 fastest speed, and Top 3longest drop in the world.

Located in Cedar Point, the Top Thrill Dragster is one of the tallest and scariest roller coasters. It’s a steel accelerator roller coaster, which launches riders at a speed of 120 miles per hour over 3.8 seconds. Riders experience an acceleration of 3.5 G-force, and only have 30 seconds to enjoy the ride. Cedar Point is located in Sandusky, Ohio, and is also home to the Millennium Force on this list. Riders reach a height of 420 feet before dropping down 400 feet.

The Top Thrill Dragster only has three incidents requiring its closure. In 2004, four people were struck by debris from the roller coaster. A metal cable had become damaged during the launch sequence, but were treated and otherwise released. In 2016, the same cable system again detached from the ride. Riders plunged backward, but were otherwise safely returned and escorted off the ride. In 2017, rumors began to stir along with pictures that the braking system on the launch track may have become damaged. The ride had been closed since, and no word has been released on if it will be open for the 2018 season.

At the top of the list is the big, bad, scary Kingda Ka, which pierces an incredible 466 feet into the sky. The Kingda Ka includes a 418-foot drop that sends rides down at a speed of 128 miles per hour. The riders will experience an acceleration of 5 G-force. The Kingda Ka is located in the Golden Kingdom, which is a part of the Six Flags Great Adventure Park. The park is located in Jackson, New Jersey, in the United States.

The Kingda Ka has had four separate incidents; in 2005, a bolt came loose and damaged the launch cable. The ride was closed for two months, but nobody was injured. In 2009, the Kingda Ka was actually struck by lightning and closed for three months for repairs. In 2011, the Kingda Ka suffered some wear from Hurricane Irene, and would remain closed until the opening of the 2012 season. That same year, a boy was struck by a bird in a freak coincidence. His injuries were minor, and he made a full recovery.