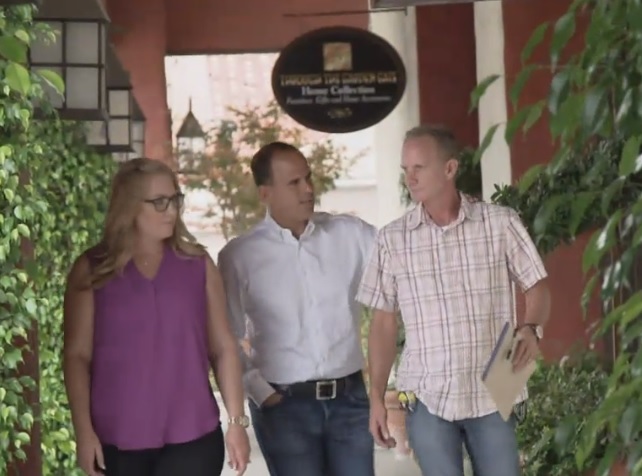 JD Custom Designs Before The Profit

JD Custom Designs in Fullerton, California was launched in 2009 by husband and wife team Jeff and Aimee Dougherty. The business is centered around designing and creating retail displays and had enjoyed quick growth and strong sales in it’s first few years, mainly through focusing on displays for the cosmetics industry.

JD Custom Designs had achieved over $2 million in revenue in 2010, but that early success hadn’t been maintained. Now in 2018, the company was suffering from reduced sales, as well as financial problems. With debts mounting up and repair bills for the machines that made their products taking most of their profits, Jeff and Aimee were struggling to complete their orders on time, and revenue in 2017 had been half that of the previous year. Marcus Lemonis knew that he could bring plenty of business to JD Custom Designs, from the many other retail businesses that he was involved in, but would he be able to solve the problems that had brought the company to the brink of bankruptcy?

JD Custom Designs on The Profit

When Marcus first visits JD Custom Designs, he notices that most of the displays they make are for cosmetics, and he’s concerned that Jeff and Aimee may find it hard to break out of their comfort zone if they are to find new customers in other sectors of the market. He meets the couple and learns that although they have an equal 50% stake in the business, Jeff is controlling, and finds it hard not to get involved with every decision that gets made.

The business has a reasonably sized 4,200 square foot warehouse, but it’s messy and disorganized, ‘Total chaos’ is how Marcus describes it. To make matters worse much of the machinery is in need of repair. Marcus learns that to get the manufacturing side of the business up to par will cost $85,000. Aimee tells him that orders are backing up because of the problems with equipment, and if everything was fixed the company could realize a far greater manufacturing capability, but the company has hundreds of thousands of dollars of debt, and on paper at least, it’s virtually bankrupt.

Aimee’s background is in sales, and she loves selling, but Jeff takes control of that side of things too. Marcus meets Wes, Jeff’s son, and he confesses that he’s worried about his dad, who is ‘All over the place’ and cannot seem to let anyone do anything without getting involved. Marcus thinks that the company is one dimensional and lacking new creative ideas because of Jeff’s control of everything, but he’s impressed by Jeff’s commitment and work ethic, and he knows he can fix the problems with the work process.

Marcus makes Aimee and Jeff an offer, he will invest $300,000 in JD Custom Designs. The money can be used to fix all the machines, pay off the debts and provide a working capital. Marcus can also bring plenty of new business to JD Custom Designs from his other companies, but he wants a 50% stake for his investment. Aimee makes a counter-offer suggesting a 40%-60% split in equity, but Marcus insists on half the business, and Jeff and Aimee eventually agree to the deal.

Marcus takes Aimee and Jeff to a local toy store and tells them to pick ten items each that they can combine in a display. Aimee looks at things from a child’s perspective but Jeff is deadly serious, and Marcus tells him he’s taken all the fun out of the exercise. Marcus takes Jeff to Laguna Tools where they look at new machinery. Marcus encourages Jeff to look at equipment that can work with new materials, bringing more creativity and new ideas, and as a result new customers. With new equipment purchased he leaves Jeff and Aimee to design a display for the toys, they’ve chosen.

Marcus introduces Wes to Steve from Grafton Furniture, another deal that Marcus made with a father and son team. Together they begin reorganizing everything in the disorganized warehouse, and even though Jeff interferes, Marcus eventually convinces him to leave Wes alone to do his own thing and learn from his mistakes.

Marcus takes Aimee to Bodhi Coffee Leaf, where he asks her to pitch a JD custom design to him on the spot. Aimee gets flustered and admits she gets nervous when she hasn’t had time to prepare for a sales meeting, and Marcus thinks that she needs to work on her confidence when selling. Later Marcus sees the toy display that Jeff and Aimee have designed, and even though he has some complaints about it, he’s impressed that Aimee then sells the positive aspects of the design to him.

Marcus then takes Jeff and Aimee to ML Creative in Los Angeles, to give Aimee more practice working on her pitch. Marcus advises her to work on connecting with the customer by asking questions about their business, and even though Jeff once again begins to interfere while she’s making her pitch, Aimee tells her husband to let her do her job. Marcus talks with Jeff about his need to control everything and learns that Jeff’s abusive father is the root cause of Jeff’s need to control everything. Marcus tells him that one way a boss can lead by example, is by empowering his employees to take responsibility for their own assigned tasks, and Jeff agrees to work on letting others work without him ‘sticking his nose in’ all the time.

Marcus then returns to the JD Custom Designs warehouse, where Wes and Steve Grafton have turned what Marcus at first called ‘A Giant junk room’, into an organized manufacturing facility. The increased space and Marcus’ investment will allow JD to buy materials in bulk, saving them 22% off the cost of raw materials, which will be over $100,000 a year based on the previous years’ figures.

Marcus, Jeff, and Aimee return to ML Creative with their designs. Aimee’s sales technique is far more confident, and Jeff is finally letting her pitch without interrupting. Marcus is impressed that Jeff and Aimee are getting out of their comfort zone of cosmetics displays and tells Aimee that he wants her to pitch the same units to Gander Outdoors, another one of his companies that could be a major customer for JD Custom Designs. At Gander Outdoors, CEO Byron thinks the display units are generic and doesn’t seem too impressed initially, but Aimee manages to pitch with great confidence and impresses him with the versatility of the units, encouraging him to see them as ‘universal’ display units. She manages to secure a deal with Gander Outdoors, and Marcus is impressed not only with her improved confidence but also that Jeff assisted when needed instead of derailing her pitch.

JD Custom Designs After The Profit

Marcus left Aimee and Jeff confident that JD Custom Designs would achieve revenue of at least $5 million in the next year, he revealed that Jeff’s commitment to the business was a big selling point, and he believed that they would make a great team, but so far there has been no other information about his involvement in the business.

Marcus Lemonis visited JD Custom Designs in late 2017, with the episode being aired in January 2018, and although Marcus was confident that he could bring plenty of business to JD Custom Designs from his other companies, the online promotion of the business appears to be less active than you would expect. The JD Custom Designs website does contain a banner declaring ‘As seen on The Profit’, but with that exception it doesn’t otherwise appear to have been updated at all recently, there’s even a link to the LinkedIn page of the Ex-General Manager who left the company in March 2017, and the JD Facebook page is also less active than you would expect.

The JD Custom Designs Facebook page was liked by just 30 people before the episode aired, and even now it has only received 57 likes. There haven’t been any new posts since August 2017, and the company Twitter account, which is followed by just 154 people, has also been quiet since the date the episode aired. Marcus Lemonis does promote the company on his own website, but for now, it appears the focus is on promoting the business to other companies that he is involved in, rather than trying to promote the business online.