What Happened to Carl Edwards? – 2018 Update 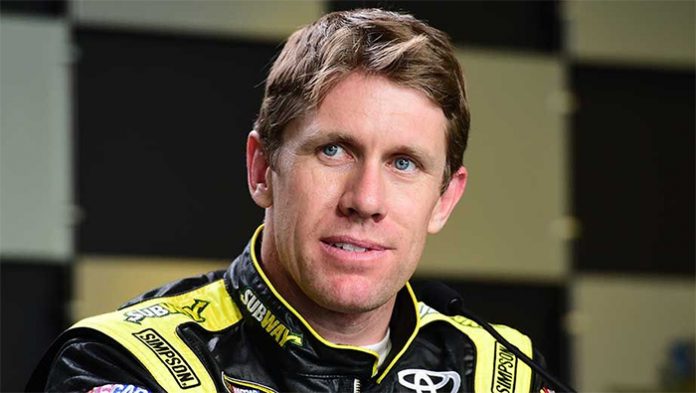 A former NASCAR racer, Carl Edwards had won numerous events throughout his career. Known for doing a backflip off of his car to celebrate a win, he last competed in the Sprint Cup Series, where he drove for Joe Gibbs Racing. Prior to that, he had driven for Roush Fenway Racing. What happened to him? Where is he now?

Prior to the 2017 season, the racer sent shockwaves through the motorsports community after announcing his retirement in January. Wanting to pursue other opportunities, he made the decision to step away from NASCAR, according to FOX Sports. As a result, he was replaced by Daniel Suarez for the 2017 season.

Despite the fact that fans believe he will one day return to the sport, he has made it known that he is content with his post-retirement life. In fact, he had recently repeated the statement this January, when he was inducted into the Racers Hall of Fame in his native Missouri. As for what he’s currently doing, it would appear that he’s enjoying his time with friends and family. After 15 years of racing on the track, he’s finally able to wind down and relax.

In terms of his final season, he had participated in the 2016 NASCAR Sprint Cup Series, where he drove the number 19 Toyota Camry. Despite his best efforts, he found himself caught up in one of the wrecks with ten laps to go, which ultimately led him to finish in the last place. Due to rain, he also did not perform his signature back-flip.

Aside from his racing career, Edwards has also made several television appearances over the past couple of years. For instance, he had been invited to The Tonight Show Starring Jimmy Fallon and The Late Late Show with Craig Ferguson in the past.

In addition to that, he’s also acted on several occasions. In fact, he had recently played the role of “West Virginia State Trooper #1” in the 2017 comedy film, Logan Lucky starring Adam Driver, Daniel Craig, and Channing Tatum. Prior to that, he had also appeared in the TV series, To Appomattox, The Grinder, Chicago Fire.

As far as other things go, it is rumored that he will be challenging Claire McCaskill for her U.S. Senate seat in the 2018 election. With that said, he has stated that “[he] will not be doing anything anytime soon.”

Born on August 15, 1979, in Missouri, Carl Edwards attended Rock Bridge High School as a teen, where he graduated from in 1997. Though he initially did not plan on continuing his education, he later went to the University of Missouri, where he pursued an engineering degree. Prior to pursuing a full-time career as a driver, he worked as a substitute teacher on the side.

In 2002, Edwards received a big break after competing in a number of events of the NASCAR Craftsman Truck Series. After a few impressive finishes on the track, he received a Rookie-of-the-Year Award. From there, he was promoted to a full-time racer for Roush Racing by the following year.

Over the next couple of years, he won several races, including the Aaron’s 312 which was held at Hampton’s Atlanta Motor Speedway. His first Busch Series win, he later became the first NASCAR racer to win both the Busch and Nextel Cup in the same weekend.

Later in 2010, Edwards won his first Nationwide Series race at Road America. Following that, he achieved a new record at the Phoenix International Raceway, with the fastest qualifying lap. Not long afterward, he won the 2011 NASCAR Sprint All-Star Race.

Since then, he has also won the Coca-Cola 600, and Bojangles’ Southern 500, to name a few events. Prior to his retirement, he competed in the 2016 Ford EcoBoost 400, which would end up being his last race.

As you can probably expect from a NASCAR celebrity, Edwards has made many television appearances over the years. For instance, he has appeared on the shows The Price is Right, WWE Raw, and NASCAR on NBC, to name a few. In 2017, he had also made a cameo in the film, Logan Lucky.

In 2009, he had also taken part in the annual All Stars Legend and Celebrity Softball Game in St. Louis, during which he won a Red Sox Cap.

On January 9, 2017, it was announced that Edwards would be retiring from his NASCAR career in order to pursue other opportunities. Following the announcement, it was made known that he would be replaced by Daniel Suarex in the 2017 season. A personal decision for the racer, he has enjoyed being able to wind down after 15 years of racing on the track.

Though many wish for him to return to the sport, he has stated that he is currently enjoying his post-retirement life, and does not plan on making a comeback. As far as we can tell, he is currently spending his time with his family and friends.