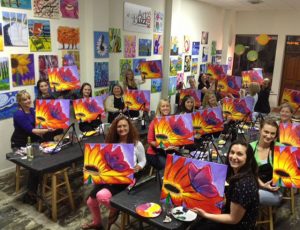 Harriet Mills and her husband, Patrick, were two powerfully successful salespeople who felt comfortable and stable in their careers. However, nothing is a guarantee in this economy, and unfortunately, Harriet lost her job in 2010. Being laid off from work is never a pleasant experience and often leads to stress, but she took the closing of one door as an opportunity to open another.

The concept for Wine and Design was inspired by a boozy art demonstration that she and her friend attended during a family vacation. Harriet had such a good time that she wanted to create a business that would allow adults to relax and have fun together. Wine and Design is a great place for a date night, girls night, or just for friends who are looking to get together. Participants are shown how to create fun paint designs while also being permitted to bring their own booze to the lesson.

Since the startup of her business in 2010, Wine and Design has become a highly recognized franchise. They have 25 locations in their home state of North Carolina and 76 in total. People absolutely love the idea of an adult-friendly painting class and Harriet is determined to continue growing her franchise. However, opening more locations can be extremely costly, especially when varying locations may require licensing for BYOB businesses. It is because of these expenses that Harriet and her husband need to take their growing business to the Shark Tank. They need an investor with experience and resources to help Wine and Design reach all across the country.

Harriet and her husband enter the Shark Tank seeking a $500k investment in exchange for a 10% stake in the Wine & Design franchise. Then they give the Sharks a brief rundown of what their company is all about. Wine and Design’s ultimate goal is to teach adults how to paint while also maintaining a fun party atmosphere that you can enjoy with your friends. It’s all about relaxing and having a good time.

Wanting to give the Sharks a little preview as to what they may potentially be investing into, Harriet introduces Heather, one of their paint instructors. Then they shock the Sharks by bringing out a male model who, as a part of their best selling bachelorette package, is in the nude. Everyone in the room is clearly surprised, but also slightly intrigued as they take 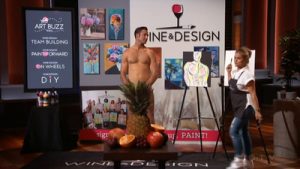 part in a sample Wine & Design class. Each of the Sharks gets a smock, canvas, paint, and some wine. The atmosphere in the Shark Tank is fun and light as they all make attempts to paint the design that Heather instructs them through.

After all the fun and games are over, Robert Herjavec wants to start talking business. Mrs. Miller then explains how she was inspired by her own personal experience with a painting class. She and her friend had an amazing time, but she knew that she could create a better business design. Wine & Design was created within a few months of her initial inspiration, and now she has an exciting business that costs only $35 per person to get artsy in a relaxed environment.

In the five years that they have been running the business, they have a total of 74 franchise locations in 14 different states. Lori Greiner is very impressed with the progress of the company and Harriet’s dedication to it. Herjavec, however, still wants to know more about the numbers. Before Wine & Design expanded their locations, they were an independent business for 9 months and earned $250k during that period.

Since expanding, their business model is set up to where they take a 6% royalty off of the other franchise locations. This year, they are projecting to make $10 million in gross revenue. Kevin O’Leary comments that this is a “dream business” and is clearly interested in what they’re selling. In all of the seasons of Shark Tank, they have never come across a business that has successfully franchised themselves to this level. Wine & Design is a company that is obviously doing well for itself and could potentially make a good investment.

Although Mark Cuban commends them for their success, he decides not to make them an 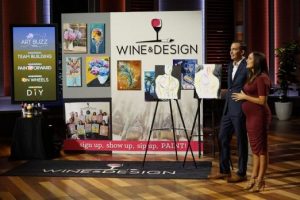 offer because he isn’t sure that they will eventually be able to repay a $500k investment. O’Leary understands Cuban’s hesitancy because it would take about 16 and a half years for him to make his money back. However, Harriet’s reasoning for such a large investment is because they need the money to expand at a faster rate. They have a lot of competition and they wanted to dominate the market while they can.

Right now they are ranking at the 3rd largest business in this niche and she worries that they’re remaining static in their position. Barbara Corcoran sees the reason for their concern and decides that it’s too big a risk for her to invest in it. Greiner also feels similarly, as she isn’t sure that there is much more room for them to grow. She also decides to not make them an offer.

That leaves O’Leary and Herjavec still in the tank. Harriet and her husband look to them hopefully, wanting to make a deal that will be beneficial to everyone. O’Leary offers them $150k for the 10% equity in addition to a $350k loan at a 12% interest rate until they can pay it off. Herjavec calls this out as being an unfair offer and decides he is willing to give them the full $500k for 1/3 of the business.

These are two entirely different offers, so Harriet wants to know what each of the Sharks would be bringing to the table to help Wine & Design grow. O’Leary says he would push his social media presence to project this business into the limelight. He would also establish a partnership with his famous O’Leary Wines business. Herjavec just plans on selling it as a second income business. And with that in mind, they decide to take O’Leary’s deal and walk out with a new business partner.

Since appearing on Shark Tank and making a deal with Kevin O’Leary, Wine and Design has only continued to grow in its success. They have continued to open more franchises across 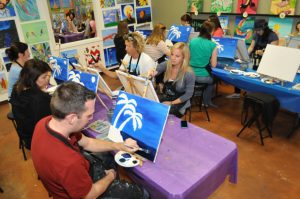 the country, but are primarily based in the east coast. Adults everywhere are still in a craze over this business, creating a relatively strong following for the brand.

If you are interested in finding a location near you, or just getting a feel for what Wine and Design is all about, they have multiple social media accounts and an official website. You can stay up to date on any new news concerning Wine and Design by following their Facebook page, Instagram, and Twitter. By clicking the following link, you can also check out the Wine & Design Website.