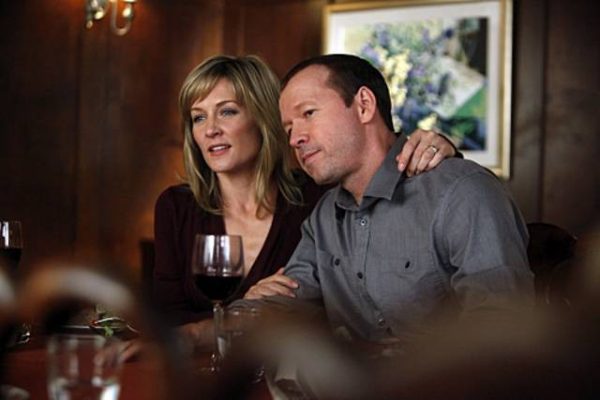 Easily one of the most likable characters for her wit, strong will, and ability to handle her husband Danny, Linda Reagan (played by Amy Carlson) was an absolute gem on Blue Bloods. So what happened to Danny’s Wife on Blue Bloods as of 2018? Will Linda Reagan be coming back for the next season of the show? Let’s find out.

Unfortunately, Linda Reagan will not be appearing on Blue bloods in the 2018 season, nor likely ever again. In canon, Danny’s Wife passed away between seasons 7 and 8, a shock to most of the fans of the show for certain. This had occurred, not due to Danny’s own dealings with the police force causing issues for his family (which had previously happened) but instead due to a medevac air accident which left her dead. We as the audience do not see the accident occur, but mostly see the events through Danny talking to a therapist, mostly about retirement from the force and Linda. This death was primarily due to the fact that Amy Carlson, the actress that plays Linda Reagan, did not re-sign her seven-year contract with the show, and the writers themselves did not have a good “exit strategy” so to speak, to the point where Carlson did consider returning to give her character a well deserved, final send off.

One of the first characters introduced to viewers of Blue Bloods, Linda Reagan canonically was born and raised in Staten Island, New York and grew up around an Italian family. Danny and Linda happened to meet in high school where according to the series “the Irish kid couldn’t resist her Italian beauty”, as was a common case in New York. One of their first dates was going to an ice rink as shown in an earlier episode. She would after high school go to nursing school where she would be top of her class and worked ten years at one of the top hospitals in the state. After this ten year period, she would stay at home as a mother for a while before returning to work as a part-time emergency nurse.
While she would give up her job for her family, there has been some issue between Danny and Linda as Linda had doubted that if push came to shove, he would do the same. After returning to her work, more tension would build as on occasion Danny and Linda would come into contact with each other during the care of a suspect, where she would uphold her duty as a nurse above all else in this case, while still loving Danny. However, her work would also save the lives of other core characters within the series, including Henry when he suffered a severe heart attack during the holiday season. One of the closest calls for Linda Reagan before her death would occur while she was at work caring for a witness of a shooting of a police officer, where the hitman (the son of a coworker) would end up putting two bullets in her, which would land her in the hospital and considerable therapy thereafter. For many fans, this event seemed like the “big one” that so many series’ have where the main character has a scare but remains as long as the series goes thereafter. That is part of the reason why so many are so surprised by the death of one of the favorite characters of the series.