According to their website, Alice Rossiter Lewis started Alice’s Table in the Fall of 2015. She was a Consumer Psychology and Visual Studies dual major at the University of Pennsylvania, and she grew up in a creative family. Alice also has an Art Business master’s degree from an institution in New York City. The business centers around women having fun and arranging flowers at high-class events. 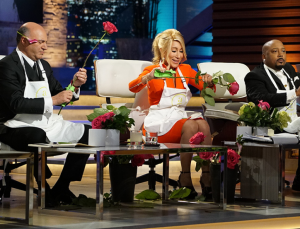 Alice walked out into the Shark Tank and faced the Sharks as she settled on the stage. She introduced herself and told him that she was from Boston Massachusetts. She said that she was the founder and CEO of Alice’s Table. She requested $250,000 in exchange for 6 1/2% equity in the company. Kevin appeared surprised that she was valuing her company so highly.

Alice was not deterred, and she started in on her presentation. She told the Sharks that her company allowed women to launch their own businesses teaching flower arrangement classes. This empowered women across the United States by making them entrepreneurs. Alice said that the market for her business was work at home mothers who were looking for flexibility and purpose in their jobs or millennials looking for side hustles.

Alice invited Sarah, the guest Shark from the women’s shapewear business SPANX, to join her on stage for a demonstration. Sarah readily agreed, and Alice invited her up on stage. Alice explains that the rest of the Sharks still seated had a full set up for the class with an apron and everything they needed for the flower arrangement segment Alice instructed each of the Sharks to don their aprons and begin to build their flower base. Mark Cuban jokingly held up the apron as if he’d never seen one before complying with the request to put it on.

Alice explains that she had also placed a Moscow Mule drink in front of each Shark because it was more fun to arrange flowers when there is alcohol involved. She talks them through snipping both of the hydrangeas that she had put in the kit at a 45° angle and putting them in the arrangement. Daymond John accidentally put his hydrangeas in the empty vase, so Alice instructed him to the one that already had greenery as the base. Kevin O’Leary picked up his clippers and asked if he would be able to trim Lori’s thorns with them. Lori said that she should do the same to him.

As Alice instructed the Sharks to add five of the roses to the vases, Kevin put one on his ear instead. If he had had hair, it would’ve been in it. Alice told him to blow on the roses slightly in order to open them up before telling them to finish off the arrangement with the calla lilies and the Gerber daisies. Sarah told her that the process was therapeutic while Kevin took a sip of his alcohol. Alice complimented Mark on his arrangement, and he seemed proud.

As Daymond walked back to his seat, he commented that the valuation should be as beautiful as the flower arrangement that needed. Lori sat back down and asked Alice what the business that she was presenting to them entailed. Alice explained that they built the platform in order to assist women in beginning their new business. They have the option to buy in had $699. For that money, they got a kit of materials which included buckets, aprons, clippers, rose clippers, and any other supplies. Mark asked how much those supplies cost the company, and Alice told him that it was about $550 for all of those things.

Lori wanted to understand better, so she waited out in her own words. She asked Alice is people could host the parties in their own homes, of party space, or wherever they would like. Lori asked if they got the flowers with the kit, but Alice explained that the event host would be in charge of buying the flowers for each event. The $700 covered the box of stuff and the training to host these kinds of parties. The patrons of the parties will each pay $65, of which Alice’s Table was getting 30%.

Alice explains that the idea was that he wanted to keep it open to more businesses in a box. She didn’t want to limit herself to just flowers. Mark Cuban asked what he could expect for the money that was put out. Alice explains that he would get the kit, training, and then the businesswomen would go out in search of venues in order to launch the classes. They would look for ways to sell tickets as well. Mark wants to know if she was also selling the idea of starting another business the same type of experience, and Alice agreed that that was the case.

Mark wanted to know why she had started with flowers. Alice explains that she wanted to do flowers arranging because it could be done anywhere. It could be done in a coffee shop, bar, or restaurant without much trouble. Mark asked how many people had purchased the starter kit so far. Alice explained that 53 people had bought in. Sarah, the SPANX executive, wanted to sum up Alice’s business from a consumer standpoint. She said what they would get is a flower arrangement for $65, meeting like-minded women, and a good time. She figured that if she purchased a flower arrangement that was premade it would be about $65 or over anyway. Alice confirmed that her musings were correct.

Alice explained that she had done it herself for eight months. She went to see if it was feasible as a business. She ended up selling over $100,000 worth of tickets. Kevin was impressed. He wants to know if anyone else had been able to replicate that. Alice told him that while no one had done it yet, there is a woman who had sold about 110 tickets per month, so she was approaching that upper limit.

Daymond wanted to know what the average was of how much a person could do in one month. Alice explains that the average Exec, as she called them, was selling about 18 tickets a month, which Alice’s Table was taking $19 a ticket for. Sarah told Alice that she had found a hole in the business, and wanted to clarify something. She saw it as being a really intense business model since Alice would have to continue to find and train people.

Alice insisted that people do come back flower events, even multiple times. Alice said that she saw about 20% of repeat customers. Kevin wanted to know what her sales were, and Alice told him $600,000. That was the total ticket sales, and they got 30% of that as profit. Kevin looked surprised as her valuation for the business was $4 million. That was 30 times this year’s profit.

Kevin told her that he liked the business, but thought that her valuation was crazy. He continued, stating that he had funded many women-owned businesses throughout his tenure on Shark Tank. He loved investing in strong, smart, go-getting women, and he saw her as one of those. He offered her $250,000 in exchange for 25%, which would value her business at $1 million.

Sarah told her that everyone would have an issue with her valuation, so she should take a moment to justify it for all the Sharks. Alice said that it was about the top line revenue. They valued it at seven times that which was standard. She also reiterated that she didn’t think of it as a flower company. Mark Cuban agreed with her. Alice continued, by stating that it was essentially a business in a box in this was her first proof of concept. Mark was very much on her side. He wanted to know how many different lines she had planned. Alice submitted that she didn’t have a five products projection line for that, but Sarah said it was okay because she was just going to get her ideas from the customers.

Before she could continue, Alice was interrupted by Daymond. He told her that he felt like he was irresponsible for him to invest in the business. He thought that it would be sending a bad message to America by giving her a $4 million valuation on something that many Americans were already doing. Mark thought he was being ridiculous. Daymond went out. Mark said that she was saying the exact opposite – that anyone could start a business for $700.

Kevin continued to urge her to take his deal. He mentioned Wine and Design, which was another Shark Tank company that he had funded was centered around drinking wine and painting paintings. He urged her to join the O’Leary team of strong executive women Daymond asked Mark what he was going to do, and he responded that he was waiting for Kevin to shut up. Kevin challenged him to make an offer.

Mark told Alice that he enjoyed what she was doing, and liked the idea of going into multiple lines with Alice’s Table. What he didn’t like was the idea of only getting 6 1/2% for his efforts. He offered her $250,000 in exchange for 10% equity stake, plus the option to buy more equity in her next round of investments at whatever the current valuation is. He invited Sarah to join him in the deal. He told her that he wanted the option to raise an additional 10% to fund his and Sarah’s stake in the company. Alice agreed, and they all shook on it. Alice’s Table was funded.

Alice’s Table Now in 2016 – The After Shark Tank Update 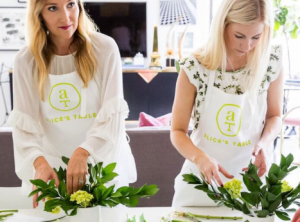 In an article in Boston Business Journal, Alice said that the response to their Shark Tank episode has been overwhelming. In the week between the episode airing and the article going out, over 70 new Execs had signed up. Over 12,000 people have liked their official Facebook page. The business has also received overwhelmingly positive reviews from the customers that pay the $65 to learn how to arrange flowers. The Facebook page also has many events listed in many different cities all across the United States. For Execs, this seems like an amazing level of support that the main business will promote your event on their Facebook page.

According to an official post by the company made on July 6, 2018, they are working hard to come up with new ideas for their Fall 2018 collection. This could be a reference to the new businesses in a box that was discussed on Shark Tank. There is no mention of exactly what the fall will bring in terms of new events but check back to their Facebook page often for updates.