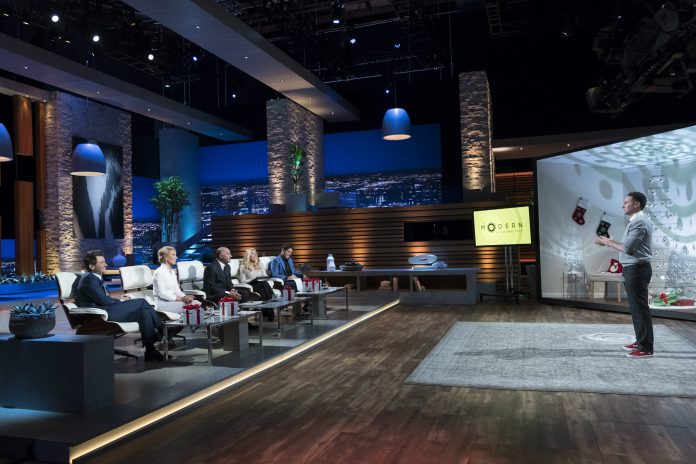 A stunning alternative to the traditional tree, the Modern Christmas Tree was created by Matt Bliss in 2011. Originally created by his grandfather in the 1960’s, Bliss had made the decision to share it with the world after the former was diagnosed with Alzheimer’s. Building the tree out of materials such as Plexiglass and Masonite, it eventually debuted at the Denver Modernism Show in 2011, where it became a huge hit.

Since his grandfather’s passing in 2012, an exhibit of the trees has been showcased annually at the original Disneyland Hotel in Los Angeles—a tradition that originally started as a celebration of his life. Not only that, but the tree has also been photographed in many Mid-century Modern homes across the country such as the Stahl House and Sleeper House.

Continuing his grandfather’s legacy, Bliss continues to make the modern trees to this day. In fact, over the past four years, sales have only skyrocketed—if anything, more and more people have been choosing to replace the Christmas tradition with the modern take.

In celebration of the 50th anniversary of Modern Christmas Trees, a new edition called The Jubilee was eventually made available via Kickstarter in 2016. In order to bring the project to life, the company required a funding of $15,000. With the help of over 120 backers, they were ultimately able to surpass the goal in just a few month’s time!

Just a year later, it was announced that Modern Christmas Trees would be featured in the popular reality series, Shark Tank. The episode eventually aired on ABC on December 3, 2017. 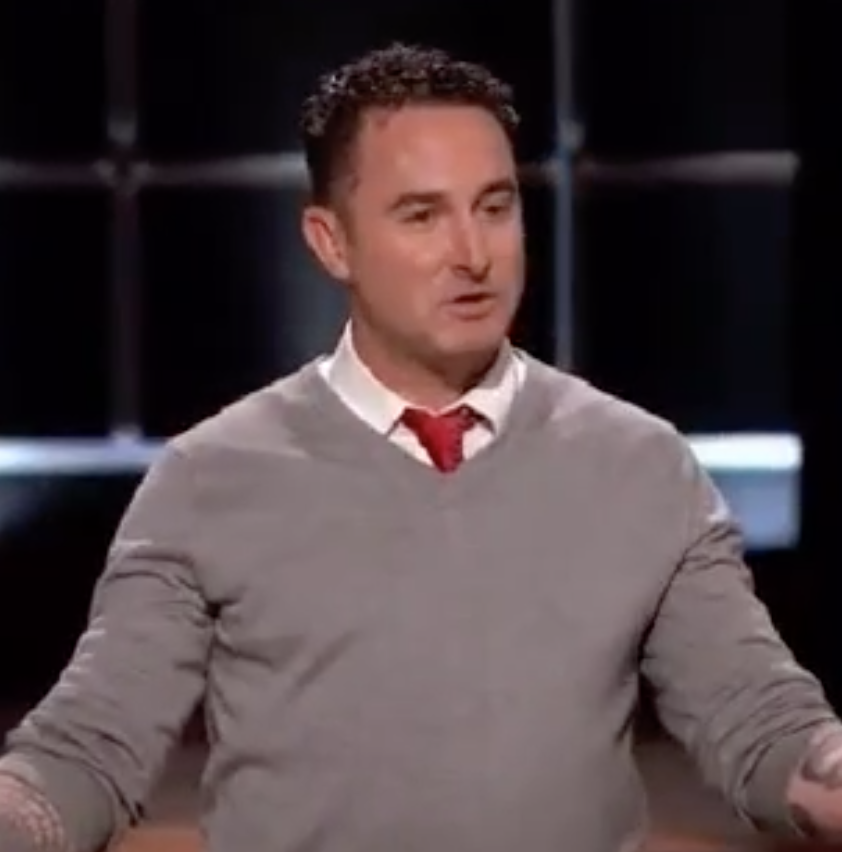 Walking into the show, Matt introduces himself to the sharks before telling them about his product—the Modern Christmas Tree. Based in Denver, Colorado, he lets them know that he is seeking a $100,000 investment for 10% equity of his company.

Gesturing to the product beside him, he explains that the Modern Christmas Tree is not only capable of lighting up, but it can also fill a room with “the sounds of a grand piano.” Available in several different colors, sizes, and styles, he explains that they are a modern twist on the traditional tree. Fully collapsible, they can easily be set up in a matter of seconds—which he goes on to demonstrate to the judges.

“Easy to put up and take down”, Bliss goes on to tell the sharks that the trees have been a tradition in his family for over 50 years. With a smile on his face, he lets them know that he’d like to share the joy “with families all over the world”—hopefully, with their help.

With prompting from Mark, Bliss eventually goes on to talk more about the tree’s background. Originally created by his grandfather, the initial tree had been made out of cardboard. As he continues to explain, a picture of the original creator is eventually shown on the TV screen. Unfortunately, however, he tells the sharks that he has since passed.

Ultimately, it was his diagnosis of Alzheimer’s that had prompted him to get involved with making the tree. Wanting to do something for his grandfather, he decided to continue his passion and create a legacy.

Impressed with Bliss’ story as well as his two tattoos—one of a tree, and another of his grandfather, the sharks eventually begin to ask him a few questions. The first to speak is Kevin, who wonders whether or not the trees are hung from the ceiling. To that, the creator tells him no—that they can also be hung from the side of the wall. 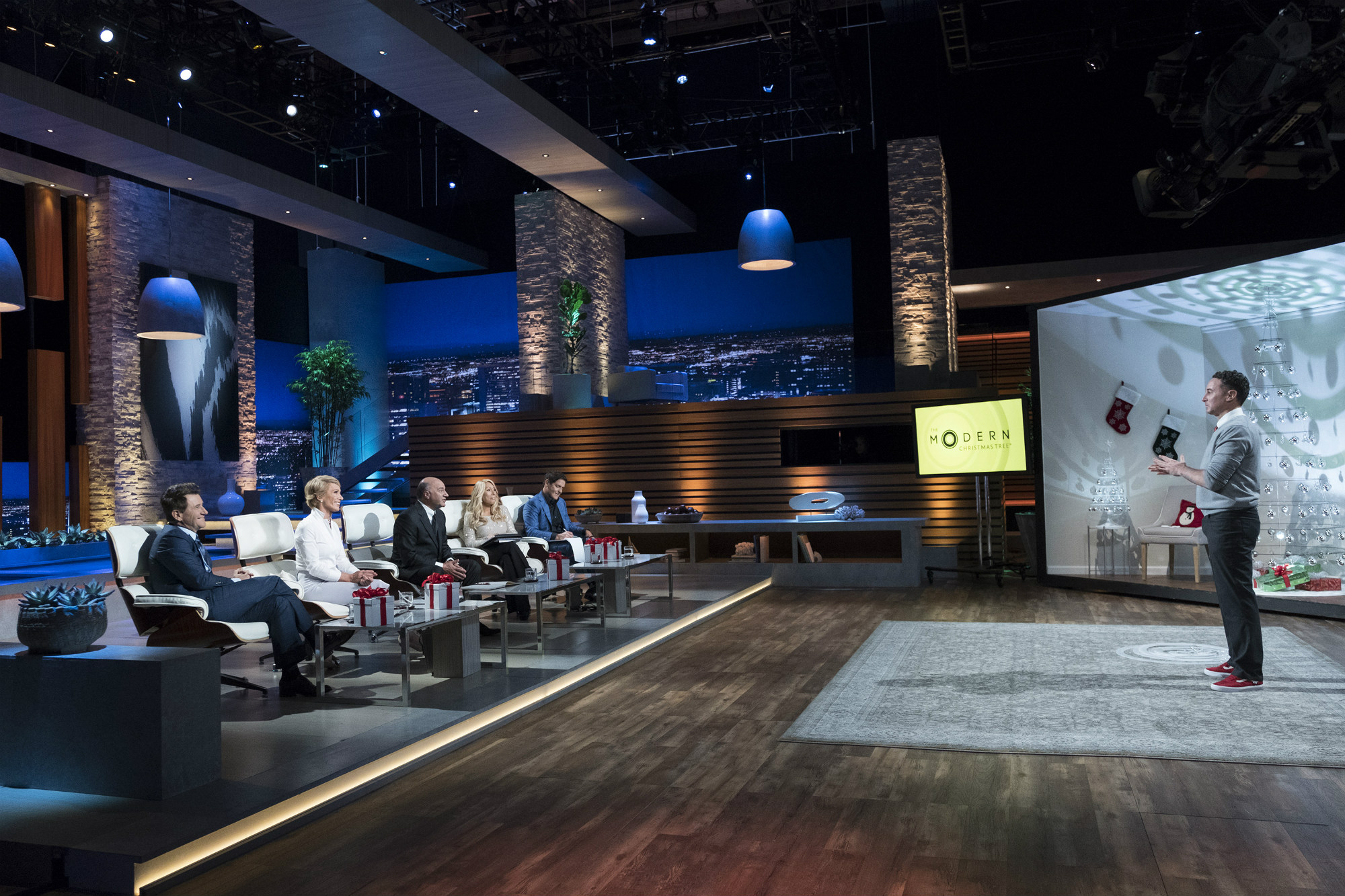 Interested in the numbers behind the product, Robert subsequently inquires about units sold, to which Bliss answers that they’re currently on track for 380,000 sales. When asked why the specific number, he tells the sharks that his company has seen a growth of 70% per year since 2014. Backtracking a bit, Bliss also states that he spent 2012 and 2013 studying the market and customer base before diving into the project.

Next, he is asked about the first steps that he took to sell the product. Answering the question, Bliss states that he had debuted the Modern Christmas Tree at a trade show called the Denver Modernism Show in 2011. Elaborating further, he states that he had put up two trees, both of which were big hits at the event.

Motioning to the big Modern Christmas Tree at the front, Robert asks the creator about its cost. In reply, Bliss tells them that the “fully decorated” tree has a production cost of $232, a statement that earns a few gasps. Wanting to learn more about the numbers, Barbara eventually inquires about the retail price, to which he reveals that they sell for $799. Backing up the price, Bliss states that each tree comes with a set of crystals, glass ball ornaments, energy lights as well as a zipper case.

Shocked at its high price point, the sharks quickly comment that the tree is not designed for “most families.” Despite beautiful, Robert goes on to elaborate that most individuals are not willing to spend a lot of money on something that is only displayed for a few weeks—something that he had grasped from a previous endeavor with Christmas ornaments. 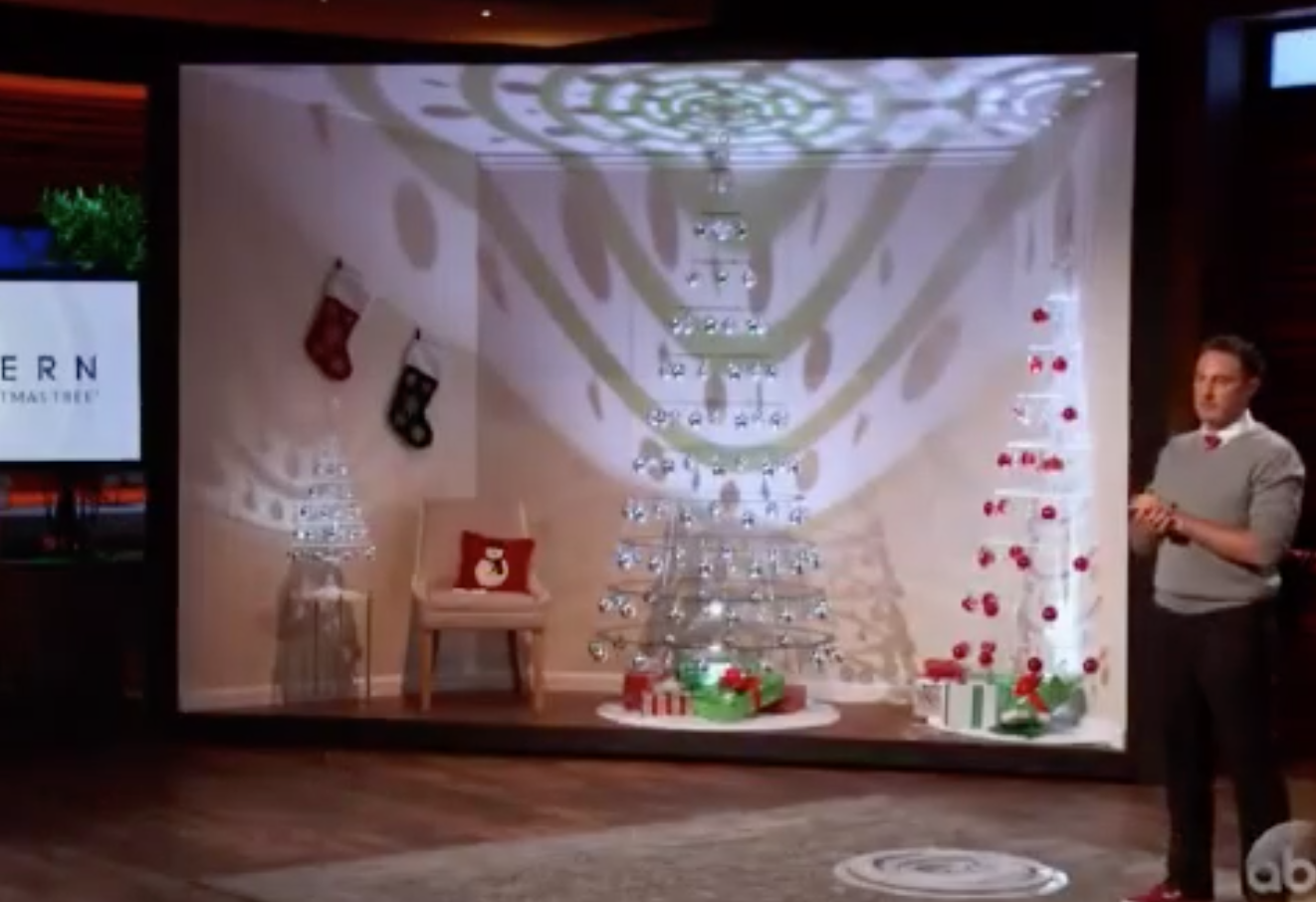 Seeing as how the tree has to be displayed in order to maximize its full potential, Lori goes on to ask him where the majority of sales come from. To that, he replies that 80% of sales are through their website, while 20% is through retailers such as Brookstone, and Frontgate. In terms of revenue, he reveals that the company made a little less than $200,000 the previous year, a figure which the sharks find amazing.

Just seconds later, however, Kevin comments that the tree is targeted towards a very small market as it is “a very niche product.” To that, Bliss is quick to tell him that the market is in fact, much larger than he thinks.

Realizing that the Modern Christmas Tree likely won’t scale up to be a “$10, $20 million product”, Mark soon backs out. Agreeing that the product has “a very limited market” despite being “very beautiful”, Robert eventually becomes the second shark to drop out. Citing the tree’s expensive price, Kevin soon also backs out, which leaves two sharks remaining.

With Barbara and Lori left, the attention soon goes toward the latter, who comments that the tree is incredibly beautiful with its crystals and lighting. While incredibly “gorgeous” however, she states that her gut is telling her to back out due to the high price point.

With that, Bliss only has one hope left for his $100,000 investment. Giving Barbara his full attention, he looks on as she reiterates some of the same comments as the previous sharks. Touched by his grandfather’s story—which had brought him to life, however, she soon makes him an offer. More specifically, she is willing to give him the $100,000 for 25% equity, in addition to a royalty of $5 per tree until the $100,000 is recouped.

Explaining her offer, Barbara shares that she had recently flipped through a Frontgate catalog, in which she noticed that there were many Christmas Trees in the ~$800 price range. Realizing that Bliss’ tree was “unique and different” compared to those, she had decided to offer him the $100,000.

As Bliss contemplates her offer, however, Kevin surprises everyone with a counteroffer—he is willing to offer the same, but for 20% share (as well as the royalty). Reminding him that he is in the Christmas business, he continues to speak as the creator quietly considers his options. As he does, however, Barbara also drops her offer from 25% to 20% equity. With two identical offers, Bliss is left having to decide which shark he’d like to work with. 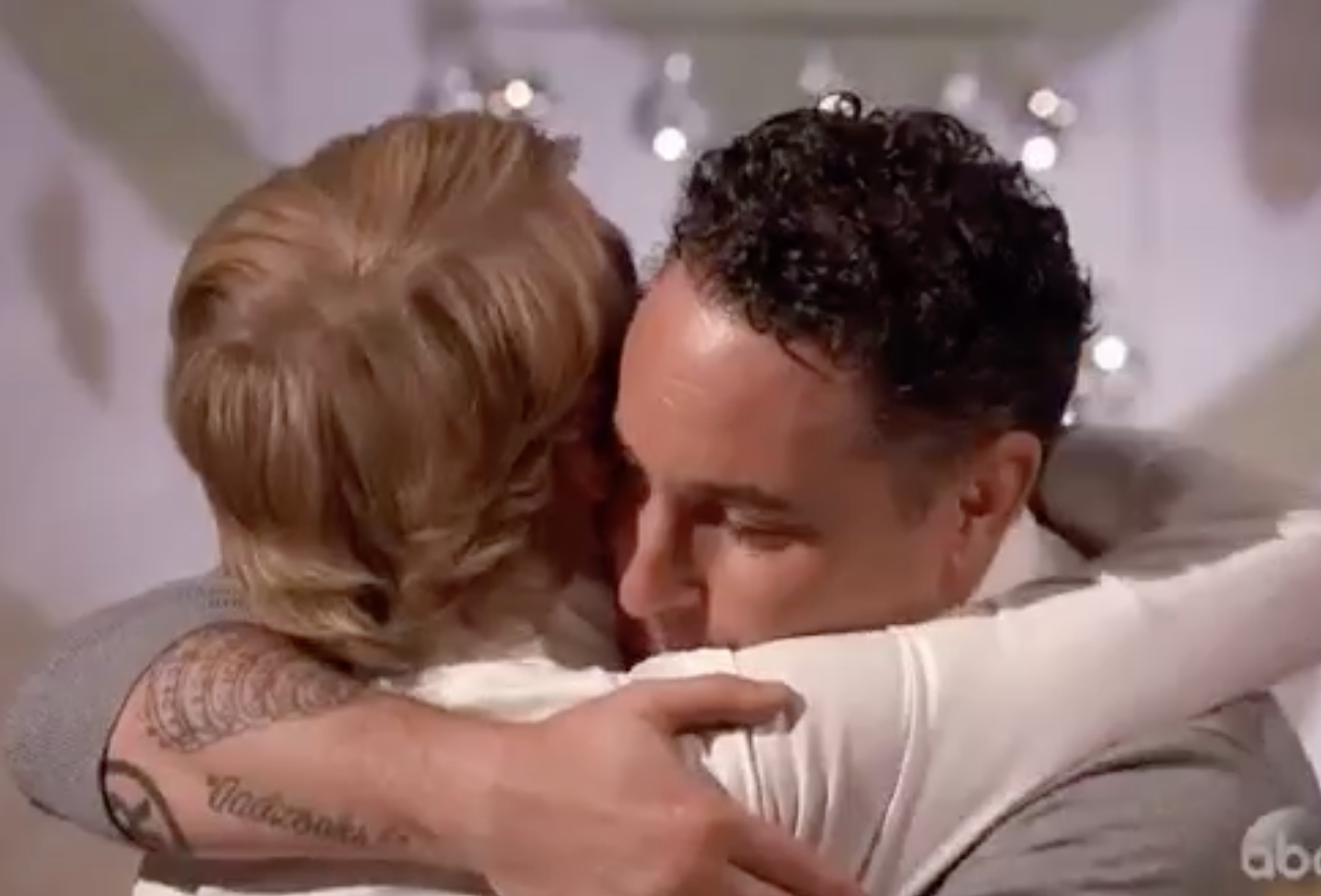 As if things weren’t interesting enough already, however, she eventually lowers her offer again to 19% equity. A little unsatisfied, the creator asks the shark what she’d be able to help him with. To that, she tells him that she’d be able to open whatever doors he’d like to have opened.

After a moment of contemplation, he draws up a counter offer—a $100,000 investment for 15% equity, in addition to the royalty. In response, Barbara lowers her offer to 18%. Realizing that it’s the best that he can get, Bliss soon accepts, which prompts the shark to come up for a brief hug.

Before the episode wraps up, Bliss states in the backstage interview that he is extremely glad to have been given the chance to “represent his family” on the show.

Modern Christmas Tree in 2018 – The After Shark Tank Update

Over half a year has passed since the Modern Christmas Tree was featured on Shark Tank. How is the company doing nowadays? Let’s find out.

With Barbara on board, the company has since stepped up their accounting game. According to a recent interview with Matt Bliss, there is now “a bit more pressure to make [the business] more successful.” Fortunately, however, the show had given Modern Christmas Trees the exposure that they’d needed. Compared to the previous year, traffic to their website has since gone up more than 300%.

In terms of their next steps, Bliss revealed that they are currently working on selling undecorated trees—as that will allow owners to make the tree “their own.” Not only that, but it will allow for a lower price point, which will hopefully increase their market. While the trees are only available in the U.S. for now, they will be made available in Australia starting later this year. From there, they will also be launching in Europe in 2019.

In terms of web presence, their Facebook page has seen a significant increase in activity since their appearance on Shark Tank. For one thing, they have already amassed more than 12,000 likes. As if that wasn’t impressive enough, they have also earned themselves a 4.9-star rating. Looking at the reviews, most customers seem to be more than satisfied with the product, despite its relatively high price range. For those who experienced issues, the company was also quick to offer help. For those who’d like to read the reviews for themselves, you can check out their page here.

As far as what Bliss himself has been up to, he has been asked to speak to various high school students over the past several months. More specifically, he had the opportunity to share his experiences with those who are interested in business, entrepreneurship, and product development.

Will he be returning to Shark Tank for an update anytime soon? Seeing as how his episode aired late last year, it might take a while before he’s invited back on the show. For now, all we can do is cross our fingers.