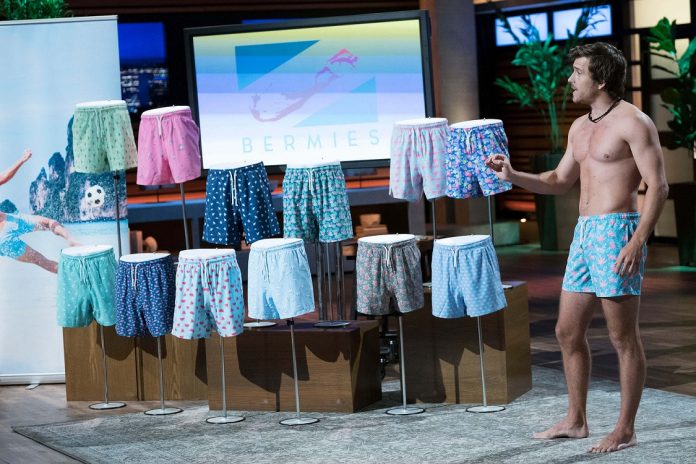 Stepping into the Shark Tank is a young entrepreneur with a business that he hopes to elevate to become a lifestyle brand. Meet Uki Deane from the beautiful city of Miami. He is seeking an investment of $200,000 in exchange for a 20% stake in his company. Two years ago, Uki was sitting at his corporate finance job wishing he could be at the beach. So, he looked his boss in the eyes and he said he quit then and there. He took all of his life’s savings and started a fantastic line of swimwear that he proudly calls Bermies.

Uki is wearing a pair of the swim trunks, and the pattern is very vivid and colorful. They’re fashionable and comfortable so you can chill out at the beach while looking good and feeling fantastic while sipping that pina colada. The number one feedback that Uki has received is that Bermies are the most comfortable swim trunks someone has ever win. Bermies are made from premium quality fabrics, unlike the other swim trunks. They’re stretchy, breathable, but most importantly, super fast drying.

Which one of the Sharks wants to jump on the Bermies adventure with Uki and sail away to their destination?

Of course, the Sharks are all eager to see a sample. Lori points out to guest Shark Bethenny Frankel that she loves Uki’s accent, which is a mix of Parisian and Caribbean. Uki passes out samples of the Bermies trunks to each Shark. Robert begs Lori to trade his green shorts for her pink shorts. Uki asks the Sharks to feel the quality of the bathing suits. Truthfully, the Sharks haven’t seen bathing suits of that high quality before. They can feel the difference right before their very eyes.

Robert asks what’s different with the material, and Uki explains that most bathing suits are 100% polyester. This is because polyester is a cheap material so it dries fast and people are used to it. Men aren’t like women, who like to go and really touch and feel the clothing they’re buying. However, Robert says that only the cheap bathing suits are made out of polyester. The more expensive swim sell between $200 and $300, while Bermies market for $49.99 retail. Uki is at that 50% benchmark for high-end swim trunks, so you can get people who have the disposable income to buy them. At this price point, it’s hard to find the quality.

Bethenny asks what the cost for each pair of Bermies is, and Uki estimates $9.80. Daymond, however, says that he should be about $6.50. Uki agrees and says that is a complete possibility once he scales up the production. Again, it’s hard to find something for this price point in the market. The cool, funky patterns really help the Bermies to stand out. It also offers high quality, but Daymond and Mark look tired. Turtles, Mark begins, are not cool or funky – in fact, they’re almost always on swimsuits.

Daymond speaks up, explaining that he has been doing business for 25 years. This type of stuff is everywhere. He promises that swim trunks are at the same price since he made it. When he started Fubu, he didn’t put three sleeves on a shirt – shirts had existed for a long time. With that said, it’s not a new business but Uki is doing good. The trunks are very good quality. But Daymond wants to focus on the business. Uki explains that the reason the Sharks want to invest in the company is because of him. 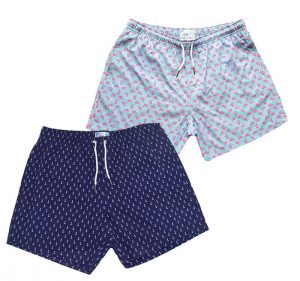 Bethenny asks how old Uki is, and he says that he is only 27 years old. Daymond asks for sales figures, and Uki prefaces that the first official year of sales was in 2016. He made $271,000 in sales that year alone. Uki started with trade shows, and he’s a one-man show. He does the pictures, marketing, and design. He began to market Bermies by taking pictures of his friends sporting the swim trunks, which helped to drum up initial interest. Bethenny jokes that if Uki was 37, they’d already be married.

With the pictures of his friends, more and more people began to like and share his photos until he began to build an Instagram account. Bethenny is a little lost, but Uki clarifies about the social media. How did he get more people? He opened a Kickstarter asking for $10,000 but received $30,000. This was in 2016. Sales so far in the year 2017, as of September, have reached $300,000 and he is estimating an increase of 20%.

Bethenny asks if he is the sole owner, and he replies “Uki Deane. One hundred percent.” This elicits a laugh from each of the Sharks. Bethenny asks where Uki got the money from. He initially fundraised $100,000 – $25,000 was of his own money, which started the business. However, he started having cash flow issues because he was doing trade shows. His family gave him $25,000 more, then he began to have more orders and it drove him crazy. This was because he didn’t have the money to fund purchase orders.

Uki had to find a way to raise more capital, and his grandparents had given him some stocks and bonds. He liquidated those to raise another $50,000, bringing the total investment to $100,000. Robert asks how big Bermies’ online presence is. Selling to wholesalers is about 80% of the business. The online is only 20%. Robert explains that the Sharks invested in a company called SandCloud which ran into similar cash flow problems. They couldn’t build inventory and do wholesale, so they moved to Instagram. They killed it and are now doing $7 million in sales a year.

However, Bermies only does 20% of their sales online, so this is a drastic difference. Bethenny and Mark ask how many social media followers Uki has, which he estimates to be around 25,000. It’s not huge and it’s not small. Mark’s attention is caught by one of the Bermies advertising signs. On the sign, a man is diving away with water splashing all around him. Mark asks if that is Uki, and Uki explains how he created the sign.

hen he wanted to begin marketing, he wondered to himself “what’s the cheapest place I can go to?” So, Uki bought a flight and to Southeast Asia and walked up to people on the beach, asking them to wear a pair of the Bermies trunks so he could take a picture. The Sharks are all caught off guard by this – Bermies are associated with the beach and Bermuda, so why in southeast Asia? Uki explains that it’s the cheapest place to go to find people that are vacationing and willing to have their picture taken.

Mark says that there has to be a cheaper way to take a picture of a guy with a man bun and a soccer ball than buying a flight to Southeast Asia. This brings up the question of whether or not Uki is able to manage cash. Lori agrees with Mark fully – Uki could have gone to Venice Beach, South Beach, or anywhere a little bit closer and less expensive. Photographers cost about $5,000, and then you have to hire the models. It’s the millennials, he proclaims. Mark lets out an exasperated cry of “No!”

Uki wanted to build the concept of the brand, but Bethenny says that you cannot build a brand out of a lifestyle. You can’t run around taking pictures and wearing shorts. Bethenny was Uki once. She had a healthy goods company called Bethenny Bakes. She would take money and spend it as she went, and it was sort of like walking into a mall without a plan. Bethenny understands that Uki is a little manic, but he’s all over the place. If he’s getting money now, he has to have a plan for that money. You can’t just say words like “lifestyle brand,” because it means nothing. You have to create a brand with a plan.

Bethenny asks what the plan is right now. The plan right now is to build a team so Uki can get to the next stage. He can’t handle everything right now. However, Mark feels that the future of the brand is to sell products online. While that’s where Uki is going, that’s where he’s not at right now, so Mark is the first Shark to exit the deal. Daymond says that Uki reminds him of a young Robert, but he’s all over the place. However, Daymond wishes Uki luck, and announces his exit from the deal.

Lori loves Uki’s passion and energy, but the problem is that Bermies is in a super crowded space. She’s sorry that she’s out, but she thinks Uki can go far. Bethenny and Robert are still remaining in the deal. Robert is hung up on the idea of the lifestyle, although he loves the passion, energy, and fun. At a certain point, he wants to put the fun aside and talk about real business stuff. Through Uki’s presentation, he was waiting for that and it never came. Robert is out of the deal, leaving just Bethenny. 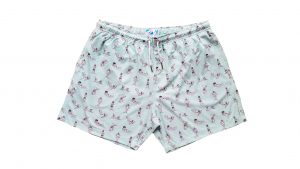 Bethenny agrees with what all the other Sharks have said, finding it hard to form a coherent product. The space is ultimately too crowded, so she’s the final Shark out of the deal. Uki Deane leaves the Shark Tank without finding an investor for Bermies.

Social media for Bermies seems to be stagnating, as Uki mentions having less than 30,000 Instagram followers when this episode of Shark Tank aired. That number hasn’t really increased, as the Bermies Instagram only has 30,900 followers as of this writing. Their Twitter has a pitiful 1,501 followers (and the last time it was used was in March of 2016), while the Facebook has a less pathetic base of 3,104 followers. Bermies may be stagnating, and the Sharks all brought up some valid points that swim trunks are indeed a very crowded marketplace.