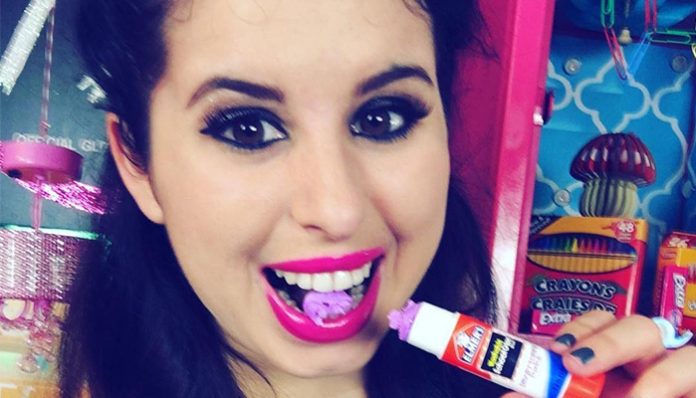 A YouTube personality, Breland Emory is best known for posting quirky DIY videos to her channel, GlitterForever17. Over the years, she has collaborated with several well-known YouTubers such as Lucas Cruikshank, Karina Garcia, Timmy Tomato, and Lisa Schwartz, to name a few. As of 2018, she has earned more than 3.3 million subscribers.

Featured in an issue of Seventeen Magazine, she has worked with many brands in the past such as L’Oreal, Splat Hair Dye, and Coastal Scents. At one point, she was even the spokesmodel for Rue21’s “Sparkle With Glitter” fragrance.

Considering the huge fan base that she has, is it accurate to say that she receives a decent amount of earnings from YouTube? How rich is the 30-year-old? According to various sites such as Nailbuzz, Breland Emory’s current net worth hovers at $550,000. How much of this came from her videos? What other things is she involved with? We’ll be taking a look at this below.

How did Breland Emory Make Her Money & Wealth?

Born on October 18, 1987, in Louisiana, Breland Emory was raised in Spanish Lake Swamp, with her half-sister Teresa. Prior to launching her YouTube career, she worked in a local mall and was part of Seventeen Magazine’s Seventeen Social Club. Ultimately it wasn’t until 2011—when she was in her early twenties, that she decided to establish herself on YouTube.

Fond of beauty and makeup, she began to post a series of tutorials to her channel, most of which quickly drew in an audience. To this day, her early uploads can still be viewed on her page, some of which include Basic Flat Iron Hair Tutorial, Quick and Fun Messy Bun, and Nail Tutorial: Hot to Trot Polka Dots. As you can probably expect, they’ve all since received hundreds of thousands of views each.

Since her rise to fame on the video platform, she has branched out to include tons of other content such as vlogs, challenges, DIYs, and more. If anything, her popularity has only been on the rise over the past few years. Though her channel is not updated as often as she’d like (i.e. once a month, etc.), many of her videos receive over 500,000 views—some even over a million! Not only that, but she’s had the opportunity to collaborate with many fellow YouTubers such as Karina Garcia, Lucas Cruikshank, Timmy Tomato, and Lisa Schwartz.

Considering all that, it’s not surprising to know that she makes a decent amount of revenue from her YouTube channel. According to Nailbuzz, the beauty guru receives over 150,000 daily views on average, which translates to approximately $300 in ad revenue per day. If we were to do the math, this works out to be approximately $110,000 a year.

In addition to her YouTube career, the 30-year-old has worked with a number of brands over the years such as Bop & Tigerbeat Magazine, L’Oreal, Coastal Scents, and Splat Hair Dye. At one point, she was even selected as the spokesmodel for Rue21’s “Sparkle With Glitter” fragrance campaign.

Yes, she has been married to her husband, Slava Avdeev since last summer (their wedding was featured in one of their videos). Unsurprisingly, he has also made several appearances in her videos.

Does Breland Emory Have Any Children?

No, Breland Emory does not have any children that we know of.

Did Breland Emory Go to College?

Unfortunately, not much is known about Breland Emory’s education background at this time.

What is Breland Emory Famous For?

Breland Emory is best known for her YouTube channel GlitterForever17, on which she has amassed more than 3.3 million subscribers to date.

Breland Emory currently lives in Louisiana with her husband. We do not have any pictures of their abode at this time.

What Kind of Car Does Breland Emory Drive?

Unfortunately, we do not have any information on her vehicle at this time.

How Much Money Did Breland Emory Make Last Year?

Over the past several months, the YouTube star has added several new videos to her channel including DIY Lip Injections, What’s in my Husband’s Makeup Bag, and My Boyfriend Died. At one point, she even posted a video of her wedding, which took place last summer.

Want to connect with the YouTube star? If so, you’ll be happy to know that you can find Breland Emory on Twitter at @Glitter4Ever17 or on Instagram at @Glitterforever17. On Facebook, you can also show your support by liking her official fan page here.