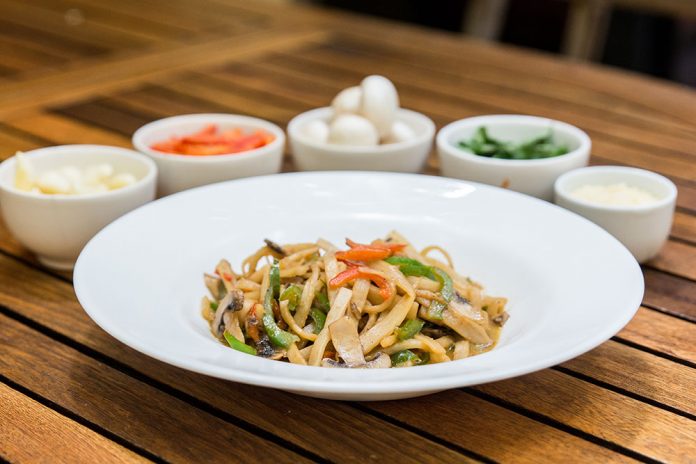 Stepping into the Shark Tank is an entrepreneur with a promise of a healthier version of everyone’s favorite guilty pleasure. Meet Alfonso Tejada from Bolivia. He lives in Miami, Florida, and has come to the Shark Tank to seek $300,000 in exchange for 10% of his company, OA Foods. OA Foods is responsible for the creation and production of Palmini. This is the latest and greatest game changer for pasta. Pasta, around the world, is a favorite. But no matter how much people love it, they try to stay away because they know it’s bad for you.

Pasta hangs out with a bad crowd, like gluten, carbs, calories, and sugar. Alfonso has brought with him numerous character cutouts which represent the bad side of pasta. He thinks it’s time to say goodbye to pasta and hello to Palmini. A man wearing a Palmini box walks out, eliciting a humorous reaction from the Sharks. Alfonso continues – Palmini not only looks like pasta, but it also tastes like pasta. It doesn’t associate with any offenders, as well. Palmini punches calories in the face, and Alfonso’s model punches through the cutouts, sending pasta flying all over the floor.

But wait, there’s more! Palmini kicks carbs in the stomach (his model kicks the cutout, again sending pasta flying). It practices its Muay Thai with sugar (again, pasta flies out) and gives gluten a big bear hug (more pasta). Mark says that Palmini is such a beast. Alfonso returns to the business on hand – Palmini contains only 15 calories, 3 grams of carbs, has no sugar and is gluten free per cup. But most importantly, Palmini tastes so good. It’s made from hearts of palm, which means it’s 100% natural, high in fiber, and you can enjoy it without concern for adding chemicals to your diet.

Palmini is also easier to make because it’s already cooked. All you have to do is open the can, rinse it, then heat it and add your sauce to enjoy a delicious low-calorie meal in a matter of minutes. Regular noodles aren’t bad, but Palmini is here to stay. So, which one of the Sharks is ready to dig into a plate of Palmini?

The Sharks all love the presentation and are dying to try Palmini. Mark jokes if Alfonso brought the vacuum cleaner. Alfonso explains that he has prepared three dishes for the Sharks to try so they can try it with different sauces and flavors. The first one is a pasta salad with shrimp, which is a little bit spicy. A whole plate would only have 200 calories. Robert says that he does not like it. The second one is parmesan and garlic alfredo, and the third dish is regular spaghetti with marinara and meatballs. 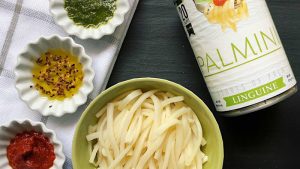 Lori says that the pasta is really good but she loves hearts of palm. She thought Alfonso was taking hearts of palm and powdering it and making noodles, but Palmini is actually just a vegetable in the form of hearts of palm. This is really hard to do, and Alfonso says that it took him two years to be able to develop the product. Right now, the patent is pending because they had to invent the specific machine for it. However, the Sharks have a bigger problem – the Palmini does not taste like pasta.

Lori and Bethenny both love it, thanks to them enjoying hearts of palm previously, but the three male Sharks notice a difference. Mark likes it but he feels a little disappointed because he loves pasta. However, Alfonso says that he always feels bloated after eating pasta. The Sharks can theoretically enjoy as much pasta as they want since the heart of palm is 90% water. However, Bethenny makes a good point – you could spiralize zucchini or just eat hearts of palm. She was under the impression that Palmini was like a quinoa pasta or a spinach pasta.

Lori says that the thing is that Palmini is a cool product despite being a vegetable. All of the Sharks speak out over each other, but Mark raises another point – there’s a lot of reasons to eat the Palmini instead of pasta. Lori asks about Alfonso’s background. He went to business school and graduated Summa Cum Laude from the University of Florida. Then, he went to Bolivia to work in his family’s business where he sold agricultural machinery. While there, he noticed he had good access to quinoa. This was back in 2009 when nobody knew what quinoa was. He started to export the product to the United States.

Alfonso is actually offering both the quinoa business and Palmini. So far this year (2017), the business has sold $400,000 in quinoa. However, the Palmini has sold about 2,000 units ($50,000) in only three months but he ran out of inventory to sell. This is a bit of a letdown, judging by Lori’s face. Robert asks what a can of Palmini costs, and Alfonso says that at retail, a can costs $9.99. This is too expensive. 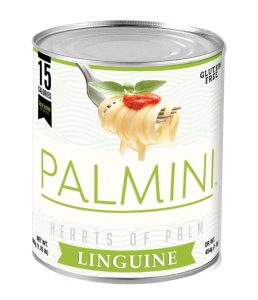 Lori speaks up, saying that she eats hearts of palm fairly regularly. They’re very difficult to deal with – whatever Alfonso’s process was, it has to be really good. All of the Palmini noodles are very uniform. Bethenny asks how Alfonso can stop the big players from coming in and scooping up a share of the market. Alfonso’s response is that he hopes one of the Sharks can stop this-this isn’t the answer Bethenny wanted to hear, evidently.

With all of the Sharks still in the deal, Bethenny is the most dissatisfied with the answers she’s getting. When you run with the elephants, Mark says, there’s the quick and then there’s the dead. If you can stay ahead, you’re fine. But Bethenny says that you can’t own a way to chop a carrot. There are different processes that impact delivery and creation, Mark says.

Bethenny loves Alfonso’s passion and thinks that he should get into the alternative food space, so much that he could even make carrot pasta. She hasn’t seen a whole line yet, so he should be the manufacturing guy. However, she doesn’t see him blowing the doors off because everyone can copy him once he perfects the process. Bethenny is the first Shark out of the deal.

Alfonso says that discovering and creating the process was a hard task. Maybe this is why he valued the company at $3.5 million, Daymond explains. He doesn’t think that any of the big food processors will blink their eyes when the product gets hot, and they won’t do anything similar or even better. So, Daymond is out of the deal next. Despite this, Lori and Mark take to whispering while Robert takes the opportunity to speak his mind.

Robert loves pasta but he doesn’t eat as much of it because of those “bad guys,” but he doesn’t believe in a sliced-up vegetable substitute for pasta. Robert is out of the deal. Alfonso is convinced that Palmini will be what Splenda is to sugar. He feels as though they’re just scratching the surface, but Robert disagrees. Lori speaks up. She loves Palmini and thinks it is awesome. 15 calories and 1.5 grams of fat with no sugar means that everything is genius. She wants to be a partner in taking Palmini everywhere. Mark loves it, too, and wants to go in together. 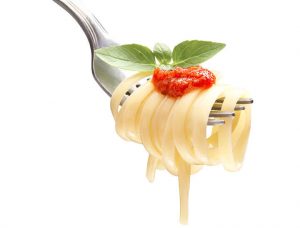 There’s a lot of work involved (is there ever not?), which means that the Sharks will want more equity. He has to fix the packaging and because Alfonso is getting two Sharks, the offer is $300,000 in exchange for 30%. This effectively cuts Alfonso’s evaluation to a third. Mark says that he has to pay to play. Lori explains that people always think there is an elevator to the top, but there are no shortcuts in business – everyone has to take the stairs. But with two Sharks, that’s an express elevator to the top.

Palmini is available through the OA-Foods website store and you can also purchase them on Amazon.com here! They are currently one of the best selling items in Amazon.com’s pasta category.

In the four months following airing they also have started being carried in some select Whole Foods, Albertsons, and Kroger stores.

Palmini maintains an active social media presence, and they post frequently on Facebook. They only have 6,000 followers, although the product page has a solid 4.5-star review across 35 different reviews. For those who have adopted the Palmini ways, it seems like they can’t turn back to regular pasta. Palmini is highly popular with vegans and those on a Keto diet.