Stepping into the Shark Tank is an entrepreneur who insists that he has a solution for unwanted loose change. Meet Jeff Witten. He’s from Amerine, New York, and his company is CoinOut. He is seeking an investment of $250,000 in exchange for 7.5% steak – percent stake in his company (his words! He’s nervous, it’s his first time). Sharks, Jeff begins, have you ever been at your favorite coffee joint, and your morning is off to a great start? That is, until, it comes time to get back all your loose change. Jeff hates loose change! It’s filthy and doesn’t fit into your wallet or skinny jeans. Getting coins back from your cash is annoying, inefficient, and a stupid way to transact.

Instead, turn your loose change into easy money with CoinOut. CoinOut is the most convenient way to digitize your loose change. They’re getting rid of those pesky pennies, allowing people to take full control over their money. Jeff demonstrates. Pay with cash at a participating merchant, and receive the change of $1.34. After handing over your cash, hand over a card and say that you want to CoinOut. The screen then asks for your phone number at checkout, and you can choose if you want to CoinOut just the coins or the full change. This goes to your CoinOut wallet, and once you confirm, you receive a text message confirming the transaction and instructions to set up your account online later.

The best part is that there’s no app to download, no financial information needed, and no signup required until you’re ready to cash out. Carrying around coins simply doesn’t make sense. So the next time you check out, CoinOut!

Kevin raises a good point – can he pay with his CoinOut wallet the next time he goes to get a coffee? This is one of the options. There are four options – you can transfer to a bank account, turn it into an Amazon gift card, donate to charity, or redeem in-store. Kevin asks Jeff why he won’t get crushed like a cockroach in this business? How can he possibly beat the giant payment operator in the long term? Jeff can explain.

Cash is not new. That’s how Jeff answers. The reason why nobody has done this is that everyone in the industry thinks cash is going away. Mark dismisses this, saying that cash is not going away. Even the BitCoin freaks don’t think cash is going away. Kevin reiterates that Jeff is going to get crushed. With all due respect, Jeff and CoinOut won’t get crushed. The technology they built can be replicated, but it’s tough to build. You also need a banking relationship and a regulatory structure in place. Kevin says that he feels like he’s at a funeral. 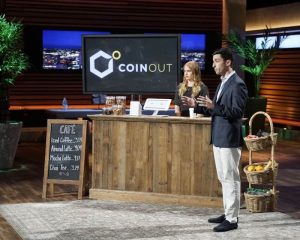 Barb asks why that retailer would have a screen there – what’s in it for them? Cash is very expensive for the retailer, Jeff says. Think about getting an armored truck delivery and involving coin. This happens at Barb’s local pizzeria, in fact. The cost, however, is the number one reason to switch to CoinOut. This is also an effective loyalty programme for the retailer. Kevin wants to speak again, but the other Sharks shut him up. Kevin then says that the demonstration barista is looking at Jeff with fear since she knows he’s a dead man walking. She can’t help but laugh. Jeff returns to the topic at hand – the second reason to sign up for CoinOut is the loyalty program. It’s really key for retailers. They build a connective tissue between the merchant and cash customer that was previously anonymous.

Robert loves it. He hates carrying change, but Barb says that’s only because he’s rich. Robert asks Jeff to walk him through how he makes money. They charge merchants $20 a month and also earn 3% on each transaction. Mark and Kevin gasp and let out a sigh. In Jeff’s experience, and this returns to Shark Tank, he was on a path to become a corporate lawyer. He watched the Scrub Daddy episode and had his textbook next to him. He looked at the guy who is teeming with emotion and energy, and he thought that the entrepreneur really cared about what he invested in. Jeff wants to be the next Scrub Daddy.

Mark says that he understands people want to use alternative payment methods to simplify their lives. The issue is getting people to use the application, which isn’t cheap. And, he’s trying to get $20 a month from all the possible applications that the barista could be running. These are fair points, and change is a fair problem. Mark, however, has an easy solution – he raises up his credit card in response. Ah, yes, the old swipe and chip method.

Jeff stammers and admits defeat. But, the numbers tell a different story – 32% of all United States transactions are done in cash. This is more than credit and debit, and it’s in the merchant’s interest to do more cash transactions. Data is king in this world. If you go to any major coffee chain, only 15% of customers are on the loyalty program. They’re not accessing any of the customers that are paying with cash because they don’t want to download an app. Big merchants will love it.

Barb wants to compliment Jeff, saying that she has never seen anyone go one-on-one with Kevin and basically dismissed it. He treated Mark as though he was equal, and Barb is impressed with his composure. He has won her respect. Robert says that the five Sharks have pointed out everything wrong with it, so he wants Jeff to tell them what’s working for CoinOut. In four months, they have done 2,500 transactions. The customers that use it love it and are coming back.

The problem that Jeff is really solving is for people who don’t like change. The loyalty and other stuff is a benefit, but the change is a fundamental problem. The phone number storage is clever, Mark admits. The best part that everything Jeff told him was that. The idea for any loyalty program to sync up with a phone number is a genius idea. You’ll have accumulated all the benefits, and that’s brilliant. The fact that Jeff is focused on CoinOut is horrific. He knows Jeff disagrees, but ultimately, he’s trying to get both the consumer and barista to be aware of it. He focused on just one feature of what could be a bigger solution, so for that, Mark is the first Shark out.

Lori hates coins and doesn’t even like to carry money, period. She’s definitely Jeff’s perfect customer. It could take off or just fizzle, and she doesn’t know how she’ll get her $250,000 back. She’s the second Shark out of the deal. If CoinOut can get out to 100,000 locations, which is possible with the franchise model, you can get to $30 million yearly. The time is now for big retailers, Jeff insists. Barb asks Jeff how long it would take to get a thousand retailers, which he estimates to be at 700 locations by the end of 2017. By the end of 2018, they would get to 3,000.

Barb totally believes that Jeff will make it happen. She extends an offer of $250,000 in exchange for 15%, but this deal is contingent on Jeff getting those locations by the end of the year. This is 700 locations by the end of the year, and that’s the missing key of the entire puzzle. However, Jeff feels that the contingency is entirely untenable. He can’t do a contingency based on locations, and all of the Sharks shoot an odd look at Jeff.

Barb points out that Jeff said he can get the locations, and he knows that he said that. He’s confident in the business, but Barb is losing confidence the way he says this. The entire deal is contingent on numbers in six months, so Barb doesn’t fully believe in the vision. Jeff doesn’t have the confidence to get there, Kevin says. When Barb borrowed money for her business, she guaranteed that she would pay them back in six months. She would never have taken the original thousand dollars unless she was sure she could find some way to get that money back to the investor. She’s out of the deal, leaving just two Sharks. 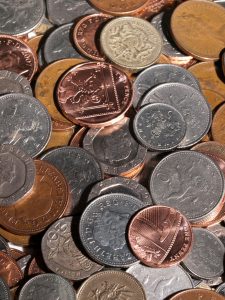 Kevin introduces an offer – but with a contingency deal denied for 15%, how much pain is he willing to take? Kevin extends an offer of $250,000 in exchange for 25%. It should cost him 10% if he’s not willing to be confident to scale at the rate Jeff believes in. Jeff says that he hasn’t felt the love from Kevin, but this isn’t about love, it’s about money. Robert extends his own deal of $250,000 in exchange for 15%. But, he wants a successful pilot with a large scale retailer.

In the end, Jeff agrees to Robert’s deal with one contingency – Kevin is not allowed to use the product.

CoinOut is currently in operation and seems to be in full swing under Robert Herjavec’s eye. The locations that participate in CoinOut include Arby’s, Burger King, Chipotle, CVS Pharmacy, Dunkin’ Donuts, Domino’s, Kroger, McDonald’s, Wal-Mart, Taco Bell, Albertson’s, 7-Eleven, and a few other locations. They insist on having you download the app in order to find locations near you. I did so, and it seems that the fundamental product has changed. You no longer receive the option to cash out via physical legal tender – only the bank and gift card options were displayed for me. This presents a problem, as CoinOut now falls in line with products similar to Ibotta and seems to miss the point of having cash in your wallet, much like a cashback function at your typical gas station. Now you simply scan the receipt and upload it to obtain credit on the app.

CoinOut still costs merchants $19.99 per month, although they apparently have a dynamic pricing model based on the size of business. They also include volume and premium packages. CoinOut is marketed as a clever way to increase sales. CoinOut includes two-factor authentication and is even FDIC insured at the operating bank. They also pride themselves on encryption and security, which is a good thing. Overall, I’m excited to see where CoinOut goes