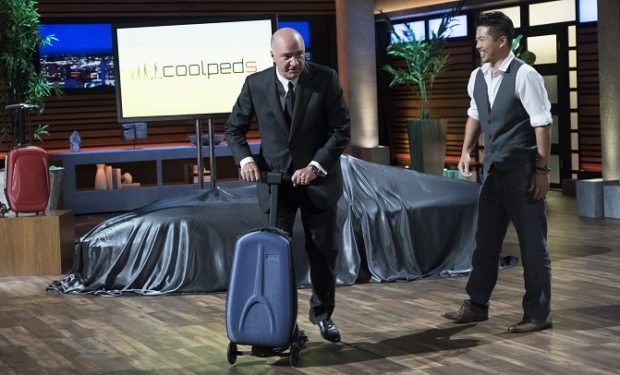 Riding into the Shark Tank is a type of scooter with a little bag up front. This is an entrepreneur who hopes to invent a new type of personal transportation. Both Lori and Barbara look at Robert, saying this looks like something just for him. They even remark about how nice it would be to get around an airport on it. The idea is simple – a scooter with a plastic container up front. This is Tony Chen, who is from Los Angeles, California. His company is CoolPeds USA and he is seeking an investment of $250,000 in exchange for 5% of the company.

Tony designs and makes the world’s coolest and lightest electric vehicles. Just like the world’s first super lightweight electric scooter for tourists. You can ride it to and from the train station, to and from the parking lot, around a huge campus, and even to the boarding gate at the airport. All without carrying a heavy backpack and having so much fun while commuting, too! The bag is easily removable, and you can go from a leisurely 7 miles per hour up to 15 miles per hour. They also include electric breaking, so when you break, you actually charge the battery.

The battery is very easily removable so you can charge it almost anywhere, and you can even charge your phone with the USB port. The scooter itself is very lightweight, and Tony folds it into itself to demonstrate. It weighs in at just under 11 pounds, so it is one of the lightest electric scooters on the planet. Tony’s mission is to provide fun, reliable, and affordable green transportation for everyone around the globe. Which one of the Sharks want to come up and scoot around with CoolPeds USA?

Kevin tries the CoolPeds scooter first, with Robert wanting to follow behind him. Kevin gets on the scooter and drives around in a circle, causing the boom camera to have to lift in order to avoid a collision. Mark watches from the sidelines with a hint of amusement on his face. Kevin rides out of the Shark Tank, and all four remaining Sharks yell to close the doors. Kevin appears to be having fun, and he returns with a smile on his face. Kevin has been scooting around at only 7 miles per hour, so if you pull the trigger, you’ll go faster. 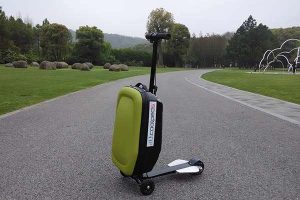 This entire time, a car-looking silhouette has been sitting in the room next to Tony. Robert asks Tony what’s under the grey sheet, and Tony says that’s a great question. This is the future, and he wants to introduce the future of the automobile industry. Underneath the sheet is a snazzy-looking futuristic vehicle, and Tony explains that this is the world’s first highway-ready, fully-electric sports car and is available for under $10,000 retail. Lori is shocked, and her jaw drops. Robert gets into the car, but Lori asks what he is selling. The car is a running prototype, so it is their next product.

Robert looks like he’s having the time of his life, and Lori and Barb both concede that the vehicle was totaling unexpected. They’re likely talking about the $10,000 price tag. Kevin, however, wants to focus on one product at a time. He wants to know more about the scooter – more specifically, what they’re forecasted to sell this year. Tony says that in the past 18 months, they have sold about $500,000 worth of product. Most of their products are sold online. Barb asks if she can use her own luggage on the CoolPeds scooter, but Tony explains that for safety reasons, they cannot use their own luggage. However, they do have a variety of customizable luggage carriers. They prefer their own type of luggage since it is more secure.

The price tag on the CoolPeds scooter is only $399 at retailers. It costs $170 to make and ship. Kevin does the math, and there isn’t enough margin for distribution. Tony says that they want to stick with online since it does great online. Lori asks if he has filed a patent, and Tony confirms that he has. Kevin gives an example, such as big airports where a lot of walking occurs. Will they allow for electric vehicles? Tony says that he does it all the time, and he has never been stopped. In fact, in his and his customers’ experience, they ride slowly and avoid any crazy stunts or hitting people.

Robert asks about Tony’s background. Tony loves cars, and they’re in his blood. When he was 7, he started waxing cars for his neighbors in order to make pocket money. Fast forward to college at UCLA, and he started to buy classic cars and repair them. He would flip the cars for a profit, and he paid for his 4 years of tuition with this. He then moved on to build fast race cars on the side for more than 15 years, so he built up a lot of relationships and resources. Mark insists that Robert makes an offer right now.

Tony is sure that he can make a difference in the electric car market, which is booming. A lot of countries like France and the U.K., or even China, will require all cars to be electric as early as 2025. But they are not selling the electric car yet, Robert says. The electric car will go up for pre-order later this year (2017). The car will retail for $9,900. The first model will be more extravagant and flashy, and they followed the Tesla model. Tesla started with a Roadster and build up from there, which is to say that the Roadster had a cool image. They want to be cool.

Mark says that this is a brutally, brutally competitive market. The three hardest businesses in the world are 1. The music business, 2. Anything involving Kevin O’Leary, and 3. Selling the cool factor. This is what Tony is selling – the cool factor. He is a grinder who loves what he’s doing, but as an investor, he would be a fool to try and sell cool. Mark Cuban is the first Shark out of the deal. 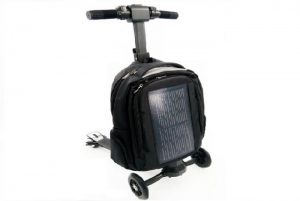 Barb voices her concerns – she’s concerned about both of the products. She doesn’t know why they put them together since it confuses the issue. She has never been in an airport and seen anyone on a scooter beside someone of an official capacity. If there are 500 people on scooters, she thinks there are logistical issues and she wants to definitely know if they can be used in airports. Tony has a long way to go, so Barb is out of the deal. Three Sharks remain interested in the deal.

Lori says that she doesn’t think she has ever been so surprised at what an entrepreneur has brought before them. These are two completely different arenas. She thinks that his heart is in selling the car and it doesn’t have a lot to do with the scooter – the scooter is the means to an end. She wouldn’t even know what to do with the car, so Lori is out of the deal next.

Kevin and Robert remain. Kevin thinks that the scooter/suitcase market is a full-time job in and of itself. Marketing the product is so hard, and it’s one tall task. 5% doesn’t even get him out of bed to get on the scooter. Tony offers Kevin to go higher on the equity, but Kevin feels like Tony has a car and tech guy with Robert. Kevin is out, leaving just Robert left in on the deal.

Robert thinks that Tony is such an impressive guy, and they share the car passion. Tony started an incredible business and is doing $500,000 in sales. He wants to come along on the ride, but he’s just not sure about the deal. The car thing and the scooter thing are just too confusing, and he means that with the utmost respect. The scooter business is just a business, but the car is the passion business. Tony insists that the scooter is his main business, but it’s just hard to see from an investor standpoint.

Robert can’t come along for a ride on the scooter and the car, he says. It has to be one or the other. The car is the major, for sure, Tony says. Unfortunately, Robert just can’t find it in him to make a deal, so he is the fifth and final Shark to exit the deal. All of the Sharks love Tony and his spirit, so they’re sure he’ll go far. Tony feels fine about the future since they have a massive plan in place.

CoolPeds is still in operation, although the website looks rather rudimentary and amateur at best. The Briefcase Electric Scooter model, the one that was advertised on Shark Tank, is sold at a price of $499 but is marketed down to $399 to coincide with the airing of the episode. They also offer two other products, the Ampere Electric Roadster, and the iBike.

The iBike is an electric bicycle that features a 350-watt hub motor, as well as some other choice designs including an electric braking system. The iBike is able to be folded up into a compact form, making it perfect for transportation. It is all housed in a carbon steel frame. The bike can be operated regularly, or you can turn on the 350-watt motor to pedal up to 20 miles per hour and up to 20 miles on just one charge. The grips feature an accelerator, much like a motorcycle. The product is sold for $499.

The Ampere Electric Roadster is a product completely of itself and even leads to a different website. The electric car is advertised with a $9,900 price tag with a range of up to 150 miles. The car has been making the rounds at the car and automobile shows, and seems to be drumming up quite the hype – it has been featured on numerous local news stations. The reserve price is only $199, and you even receive a free electric briefcase scooter with your preorder placement.

Interestingly enough, Ampere advertised a public test drive event that was starting in Spring of 2018, but I was unable to find anything to follow up on this.
The electric briefcase scooter by Coolpeds was available on Amazon but received an unimpressive 3.9-star rating over only 7 reviews. Most of the complaints were with the packaging and shipping, as two received products that were defective from the box. Another says that the quality is weak and flimsy, although this unit was purchased in January of 2015. The electric briefcase scooter is available through the CoolPeds website, but not through Amazon.