Coming into the Shark Tank are two entrepreneurs who believe they have a better version of a hot beauty trend. Meet Aniston Eisenberg and Mary-Ellis Scott, who are from Los Angeles, California. The two women are the founders behind Dermovia Lace Your Face, and they have come to the Shark Tank to seek an investment of $350,000 in exchange for 10% equity in their company. Masking has been a go-to skin care treatment for ages. Masks help with hydration and clear your pores. They even make all your other beauty products work better.

Skincare has come a long way since the cucumber masks, and the two women display an unflattering picture of a facial mask. Thank goodness, because Aniston still has nightmares about it. Sheet masks are the latest development and beauty craze. They streamline the process, but still face their own set of challenges. Sheet masks are slippery and slimy and without a way of securing it, you have to stay completely still for the entire length of the treatment. This is because a mask can slip off your face and spill ingredients into your eyes. These masks can take up to an hour, but who has time for that?

These two women are transforming the mask industry with Dermovia Lace Your Face. This is an innovative design that allows you to multitask while wearing a mask. Lace Your Face is a cotton stretch fabric saturated in serum. It fastens to your face with the patented earhook, and the two women put the masks on to demonstrate. While the masks aren’t exactly flattering, they do look a lot better than cream smeared all over your face. Every Shark makes a joke that they are being robbed, including special guest Shark Bethenny Frankel.

The mask offers gentle compression which activates the body’s natural repair response, which helps the body to work faster. Mark jokingly asks if the production crew told the two women that they would be on national television. The two women are on a mission to give the user the best skin they deserve without sacrificing their precious time. The Sharks all laugh again, since the masks just look ridiculous.

Bethenny and Lori are on deck for this segment, since they’re the most intimate with facial masks. Bethenny asks if the masks are reusable, which Aniston says that they are. A mask has enough serum to use twice. Lori loves the fabric, and Mark says it’s like putting underwear on your face. Lori asks how the serum works, and Aniston explains that the masks saturate in the pouches. Mark and Robert put them on (incorrectly, at that) and look ridiculous, while Bethenny tries to focus.

Robert turns to Bethenny sharply, causing her to jump, while Daymond slides his mask on and demands that he doesn’t want any small bills. The male Sharks are still caught up in their bank robbery fantasies. Bethenny jokes that Robert looks handsome, but she returns to the business at hand. She actually uses the face masks, and typically uses them on the plane. In Asia, women mask every day. Bethenny uses the gross sheet masks, like one that the two women demonstrated, but ultimately the masks are just a huge pain in the ass for her. Bethenny would absolutely wear Dermovia Lace Your Face to an event, let alone on the plane. 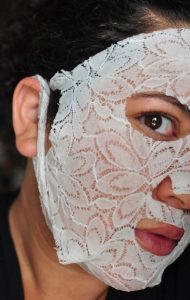 The revolutionary difference for Bethenny and Lori is that the mask stays on. She asks if the two have a patent on Dermovia Lace Your Face, and Mary-Ellis explains that they have a patent on the mask, two pending utility patents, and an issued design patent. Daymond starts by saying that the margin is great from an investor’s standpoint, but why is the mask so much? Mary-Ellis actually has a background in the medical field. She formulated a wide variety of masks and treatments to mimic the treatment that they could get in a clinic for home use. This is why there’s a premium cost, as the mask undergoes a medical grade sterilization.

Bethenny loves the packaging but for $55, you could get a facial for a little bit more. Plus, the facial scrub is more effective. The price point is variable because currently, Dermovia Lace Your Face is producing at a lower volume and on top of that, the ingredients are all naturally derived-actives. Robert says that this industry has the highest margins of almost any industry. Massive margins invite massive competition, which really does not want the small players to be successful. Robert sees a lot of challenge, so, unfortunately, the business is not for him. Robert is the first Shark out of the deal.

Mark simplifies the deal – he loves the mask, he’ll wear it every day, but he’s a guy and knows the least about the product. Mark is the second Shark out of the deal. Bethenny speaks next, saying that she loves the premise. Whenever she posts a picture of herself wearing a facial mask, she’ll get tons of comments asking her what mask or product does she use. She has conditions on her investment in Dermovia Lace Your Face. The first one is that the price would have to come down to under $10 per mask, or $39.99 for the four pack. $55 is way too much.

The second condition is that Bethenny wants a 30% equity stake in exchange for the $350,000 that the two women came asking for. Lori goes back to a question, but Mark points out that they have an active offer on the table. Aniston wants to explain more about the price point of the mask, but Lori asks the two of them to finally remove their masks so the viewers can see their beautiful faces.

Daymond speaks his mind – he doesn’t know anything about the health and beauty segment, so he’s out of the deal. Lori says that she knows the two women have a cosmetic and medical background, but she doesn’t know why they’re better than the other masks out there. She doesn’t think that people would buy the masks for $55 without Dermovia Lace Your Face becoming a bigger brand, so Lori is the fourth Shark out of the deal. Bethenny is the final remaining Shark.

Bethenny shoots a smug grin as she is now the sole remaining investor. She asks the two how much inventory they have, which is 50,000 units. In fact, they currently have two additional pending purchase orders which combine for a total of 1 million units. Daymond gasps at this huge number. Mark wants to ask a question, but Bethenny hushes him since he exited the deal. Aniston explains that they need the capital to fund these purchase orders, which will help them grow exponentially overnight.

Bethenny’s offer stands at $350,000 for 30% equity. The other Sharks want to know who the purchase orders are for, but Aniston says that they have a hard order (an order guaranteed for X units, in this case, an order guaranteed for 1 million or more). It’s for a subscription box. Bethenny grows frustrated and says that she will count back down from 10 to 0, and if she does not receive an answer, she’ll exit the deal. Aniston explains to Bethenny that they can’t give away that much equity and counter back with $350,000 in exchange for 15%.

Lori raises her hand and says that she’ll do it, despite having initially backed out of the offer before. Bethenny looks on in shock and annoyance, but Mary-Ellis and Aniston have found themselves a partner with Lori Greiner. The two wanted Lori to start with, and it was Bethenny’s discovery of the million unit purchase order that caused Lori to step back in and make a somewhat ridiculous offer. 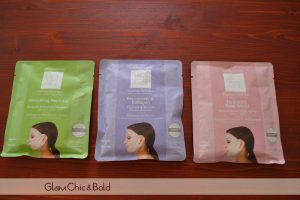 Dermovia Lace Your Face After Shark Tank – 2018 Updates and Developments

While this episode of Shark Tank aired less than a year ago, Dermovia Lace Your Face and other products seem to be stagnating. I wouldn’t be surprised if the deal with Lori somehow fell through, although I couldn’t find any evidence to support this. Dermovia’s Lace Your Face product is currently available through both traditional retail channels and ordering online. The price is still at $55 for a 4-pack of lace masks (remember, each mask has enough serum to last for two cleansing sessions). However, it appears that the product has trouble gaining any traction because the Amazon page only has a moderate 3.3-star review over 9 different ratings.

Dermovia’s Lace Your Face product comes in numerous “flavors” – hydrating rose water, exfoliating papaya, smoothing peptides, healing yogurt, calming chamomile, and clarifying mulberry. Each product has under 20 reviews (exfoliating papaya has the most with 23 reviews), and all of them range between a 3 and 4-star review. All of the products come in between the 3000th and 2800th most popular item in Amazon’s Treatments and Mask category.

Many of the reviews for Dermovia Lace Your Face claim that a better product/alternative is available for cheaper, which I’m inclined to agree with – it’s hard to get people to adopt your product when it’s $7.50 per use and only two uses. Some of the reviews even claim that the product was grossly wet and damp when they put it on their face, and one user even claimed that their package didn’t even have a product in it.

Dermovia is available at some retailers, including Barney’s and a select number of Sephora outlets, but they have also introduced a subscription box through their website. Users of the product can subscribe for a monthly package of four masks and save 15%, bringing the price down to $46.75. While the Amazon reviews take a more critical approach, almost all of the reviews from Dermovia’s website praise the product for being comfortable and easy to use. Nearly 75% of all the reviews on the website have been present since before the Shark Tank episode aired.