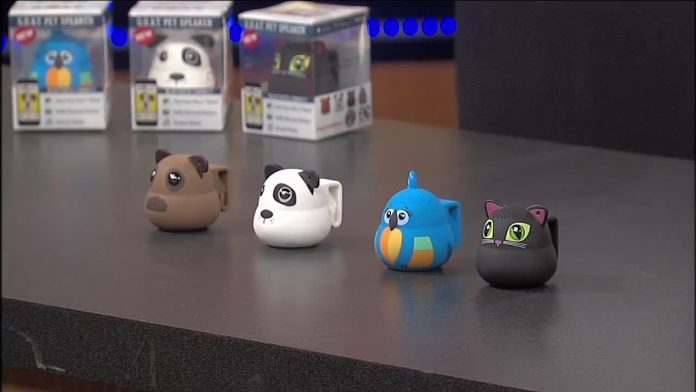 Headquartered in Bloomfield Hills, Michigan, G.O.A.T. Pet Products was founded by Michelle Winowich. Prior to launching the enterprise in 2016, she worked in the pet industry for many years as both a branch and sales manager, accumulating valuable experience along the way.

Early this year, it was announced that she would be showcasing the company’s innovative line of pet products—the G.O.A.T. Pet Speaker and the gluten-free G.O.A.T. Milk Dog Treats, on the ninth season of ABC’s Shark Tank. Just a couple of weeks after the announcement, the episode aired on ABC on January 14, 2018.

According to a segment of the show, the company had a $5 million valuation—this infers that she had already sold a considerable amount of products by the time she appeared on Shark Tank. 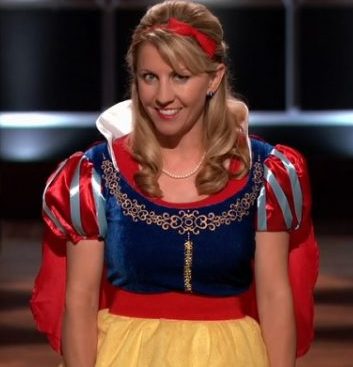 The second entrepreneur to be featured in the episode, Michelle walked into the show donning a Snow White costume. Along with her two partners—one of whom is covered in fur and has four legs, she introduces herself and her company, G.O.A.T. Pet Products to the sharks.

Getting right to the details, she tells the panel that she is looking for a “G.O.A.T. Partner” to invest $499,000 in exchange for 9% equity in the company—a statement that gets a few chuckles out of the sharks.

Elaborating further, she explains that she has the power to give pets a voice “just like in fairytales.” Seeing the confused looks on the sharks’ faces, she quickly decides to give a demo. With a few swipes on her phone, a voice quickly comes out of her canine partner. Astonished, the panel laughs as they look on in disbelief.

Admitting that she’s not a real princess, Michelle goes on to explain that her canine friend is in fact, a proud owner of the G.O.A.T. Pet Speaker. As she says that, the camera zooms in on a dog-shaped speaker that is attached to the dog’s collar. From there, she continues to elaborate, saying that with the help of an app, owners can easily interact with their pets “like never before.”

As if that wasn’t cool enough, Michelle reveals that the G.O.A.T. Pet Speaker has yet another function—that it can easily stream your favorite tunes via Bluetooth. Moments later, she shows off a few dance moves as a song starts playing. Not only that, but the speaker comes with a selfie button at the bottom, which allows for easy photo-taking with your pet.

In order to make her fairytale a reality, she once again reiterates the fact that she needs the sharks’ help. To that, however, Daymond asks why she is dressed like Snow White. In reply, she tells them him that Snow White had always had the ability to talk to animals—something that ties into her G.O.A.T. Pet Speaker. As a response, the rest of the sharks break out in laughter. 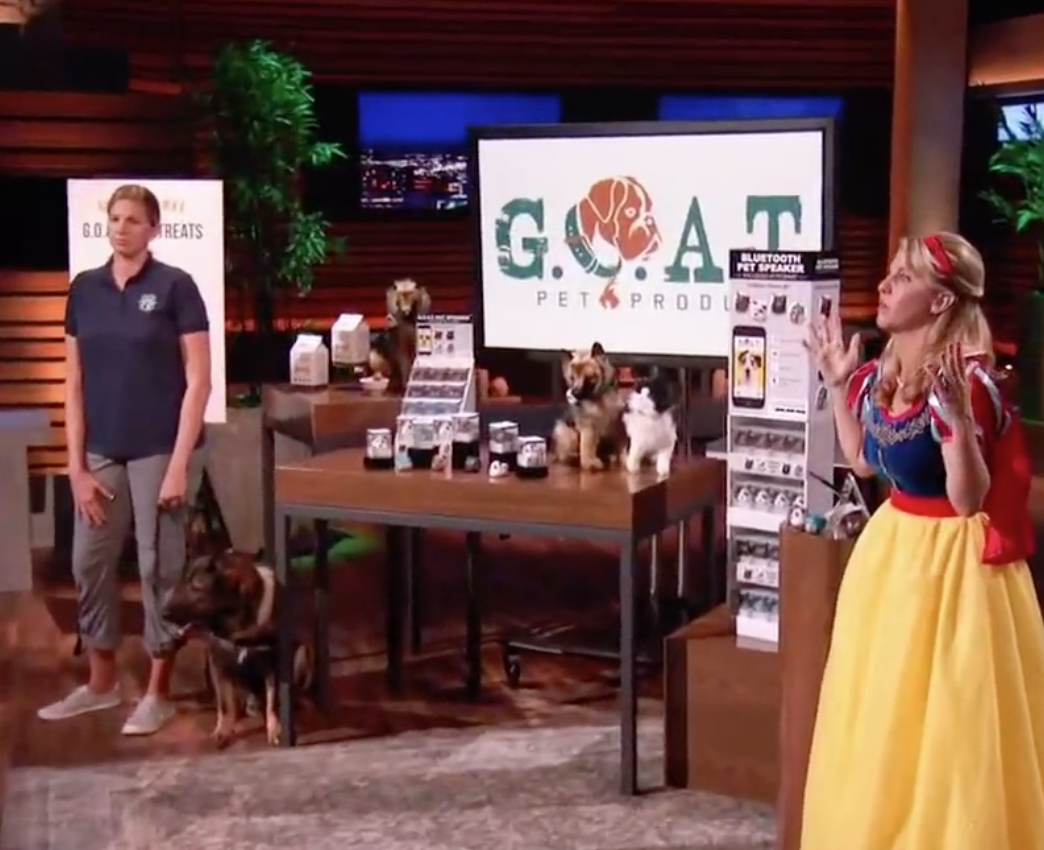 From there, she is asked why she developed the product. Wanting them to understand the item better, she hands out a few G.O.A.T. Pet Speaker samples to the sharks, each of which features a different animal. Upon receiving them, Lori is the first to admit that the design is rather cute. Continuing with her explanation, Michelle tells the panel that G.O.A.T. stands for greatest of all time and that she has already sold more than two million units over the past six months.

Speaking about the company’s history, she tells them that she had originally gotten the idea for the speaker while working as a manager in the pet industry. Encouraged by her husband to keep it to herself, she eventually partnered up with a family member and launched the company in 2016. Confused about the product’s success, Lori speaks up, to which Michelle explains that she had originally debuted the product at a Pet Expo, where people were “literally lining up” to see the item.

Continuing with her explanation, she tells the sharks that she was soon approached by PetSmart, who was “extremely interested” in her products. There was a catch however—the company wanted exclusivity for six months. Jumping at the opportunity, she partnered with the retailer through which she eventually sold over two million dollars worth. With that, the panel is amazed.

From there, the sharks inquire about the product’s price, to which she tells that that each of the G.O.A.T. Pet Speaker sells for $24.99. Next, Mark asks about the manufacturing costs, which she reveals to be less than $5 “including packaging and everything.” Wanting to get a better understanding of the company’s financials, Michelle is later asked how much money she’s raised with her silent partner—$260,000 for 50% equity.

Surprised at the high number, the sharks eventually begin to express their concern about the lack of data regarding its sales. More specifically, about whether or not she would be receiving returning orders for the G.O.A.T. Pet Speaker. To make matters worse, Mark soon tells her that “[he] hates the pet industry” as he “doesn’t have a feel for what’s going to last and what’s not going to last.” Seconds after making that statement, he tells her that he is out.

Not long afterward, Kevin also tells her that he is out. With that, Michelle is left pitching her product to three sharks—Lori, Daymond, and Robert. To her dismay, however, Lori soon backs out as well, stating that she finds it difficult to invest in such a risky venture. From there, her attention goes to Daymond, who tells her that in order to make things work, he would have to give her “a very aggressive offer”, one which he is not yet ready to make. For that reason, he also backs out.

With that, Robert is the only shark left. With all eyes on him, he starts to show interest in her product. In his words, she had “done something no one had ever done before” with the G.O.A.T. Pet Speakers. Though he doesn’t know where the sales will go from here, he admits that what she’s accomplished so far is impressive. A big fan of the pet industry, Robert continues to talk as the rest of the sharks look on.

Seconds later, he tells her that he is going to make her an “aggressive offer.” With that, Michelle waits anxiously for his words. With a smile, he eventually offers her the $499,000 that she is seeking, however, for one-third of the company. Not knowing whether or not the speaker will actually sell through, he explains that that is the best that he can do at this time.

Confirming, Lori repeats the numbers—that Robert will be asking for a 33% equity for a $499,000 investment, and not the 9% that she had previously offered. Trying to negotiate, Michelle asks whether or not he will accept a 20% share, to which he refuses. Reminding him that her product has a profit margin of 89%, Michelle tries one last time to negotiate. To her dismay, however, she gets quickly shut down again. Unable to negotiate, the founder only has two choices—either to accept his offer for a 33% share or to go home without anything. 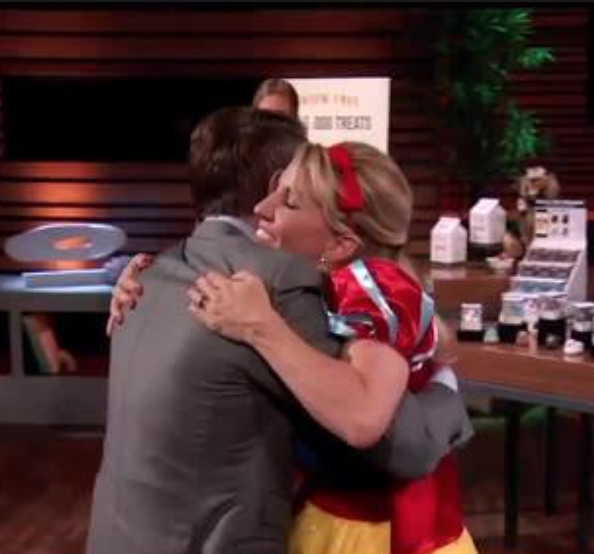 Faced with the difficult decision, Michelle collects her thoughts for a few moments before accepting Robert’s offer—a $499,000 investment for a 33% share. A done deal, Robert subsequently walks up for a hug, as she expresses her gratitude. With congratulations from the rest of the sharks, the G.O.A.T. Pet Products founder eventually walks out of the set, with her two companions.

Seemingly satisfied with what she was able to get, her ultimately leaves with a smile on her face. In the subsequent interview, Michelle appears cheerful as she exclaims happily that she now has Robert as her partner. In her words, “it’s beyond a dream come true.”

At the time of this writing, more than half a year has passed since Michelle was on the show, promoting the G.O.A.T. Pet Speaker. How is the company doing nowadays?

As far as we can tell, the company appears to be doing quite well. For one thing, the app for the G.O.A.T. Pet Speaker has received countless positive reviews on both the Google Play and iTunes stores over the past several months. Reading through what the users have to say, there seems to be a general consensus that it the speaker is a fun gadget with good quality sound. Having said that, there are some who have experienced difficulty with the item—for these individuals, it appears that the company is prompt in offering help.

Over the past few months, G.O.A.T. Pet Products has since also established themselves on social media. In fact, they’ve already amassed nearly 10,000 fans across Facebook, Twitter, and Instagram. For those who want to keep up with the company, it might be a good idea to like and follow them on Facebook, as they tend to post their latest news and updates on their fan page (unfortunately, the “news” section of their official website is not updated on a regular basis). Speaking of which, they had just recently filmed a new advertisement for the G.O.A.T. Pet Speaker last month!

With their rise in popularity, the company has also released a new item—the G.O.A.T. Milk Dog Treats. Gluten and lactose-free, the peanut butter-flavored cookies are made with goat milk, which is naturally packed with nutrients. Easily digestible, it is also marketed as being a good option for dogs with digestive issues. Proudly made in the USA, they are available for purchase at a number of retailers, which you can check out on their official website. But wait, that’s not all—each pack of G.O.A.T. Milk Dog Treats sold also helps to provide jobs for Americans with disabilities at Wisconsin’s Eisenhower Centre.

For those of you who watch Shark Tank, you’re probably familiar with how the show tends to invite some of its previous entrepreneurs back for an update. For now, there has not been any announcements about her returning for an update. Seeing as how she had just recently been on the show this January, we might just have to wait a little longer to see if that would be a possibility.