Locker Board After Shark Tank – 2018 Update

Locker Board Before Shark Tank

Carson founded his company Locker Board in 2016. As he told the Sharks, he wanted a skateboard that would fit in his locker at school and decided to make one himself. He started with using skateboards from official Vans skate parks. He ended up selling over $10,000 worth of boards in just 9 months. That is pretty impressive for a boy who hasn’t hit puberty yet. Let’s see if the Sharks will be just as impressed with his numbers and his business skills.

Locker Board on Shark Tank 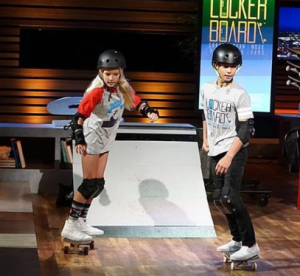 A young blonde girl skateboarded onto the stage and into the Shark Tank. A slightly older boy followed behind her, and he did some tricks before going to the center of the stage to met an older woman in a denim shirt. The Sharks clapped and smiled at the boy indulgently. Carson Kropfl greeted the Sharks and introduced himself. He told him that he was an 11-year-old inventor, skater, and surfer. He went on to introduce Sierra, who was the first one on the stage. His mother, Carrie, was the next to tell the Sharks who she was.

Carson requested $60,000 from the Sharks in exchange for 15% equity stake in his company, Locker Board. He informed the Sharks that they just saw his first invention, is called Streetubez. It allowed skateboarders to act like they were surfing “anywhere, anytime.” Carson continued, stating that he created his second invention in middle school after receiving his first locker combination. He told the Sharks that his locker was decked out, but he was disappointed because none of his skateboards would fit inside it. Carson decided to invent one of his own.

He showed them a sample that had been sitting on the stage. His mother cut in and said that the Locker Board was made from recycled skateboard decks. It measured 16 inches long and will fit inside backpacks or lockers. Carrie said that they were also good for the planet since they were recycling old gear. Carson thanked his mother and said that they should start to pass out samples. Sierra happily obliged.

Kevin told Robert that he should get on the board, and Robert giggled and said that he was planning on it. Sierra thanked the Sharks after she finished handing out the samples, and she skated off stage. Carson said the benefit of the sharks investing in his company was that they would help inspire people all over the world. He said that he been surfing the sharks since he was five years old so he wasn’t afraid of their questions.

Richard Branson, the guest Shark who is the popular CEO of Virgin mobile, was the first to ask questions. He asked the if Carson was the first one to cut down a skateboard to size. Carson’s mom Carrie stepped in and said that it was the first skateboard that could fit inside lockers and backpacks. Robert insisted that he had seen small ones before and that it was not a new idea. When Robert asked Carson what was unique about it, Carson said that they were saving the planet, fun to ride, and easy to take anywhere.

Carson told Robert that the square shape of the board allowed the rider to still do tricks even on the smaller board. He insisted that it wasn’t going to be too wobbly, and the customer’s feet could fit on it easily. Daymond asked Carson where he was getting his old boards from. Carson told him that he was getting 50 boards a month from Vans skate parks. Daymond had a follow-up question. He wanted to know if Carson was paying for the boards, or if they were just giving them to him. Carson said that he was getting them for free.
Robert wanted to know if Carson was selling any. Carson let him know that he had been selling for nine months. He’d had sales all over the country. Robert asked him if he had a website, but Carson told him that he was doing it all through social media. Carrie said that he had made $10,000 in revenue during those nine months. Mark Cuban asked if Sierra was Carson’s girlfriend. Carson stared at him for what seemed like five minutes before saying that she wasn’t. The Sharks all had a laugh, but Carson just looked uncomfortable.

Carson said that it initially cost and three dollars per board, but now he was put in touch with Madrid Skateboards, who was the manufacturer for Vans. That put the price up to $13 per board. He wholesaled the boards for $55 each and sold them at retail for $99. Robert wanted to know where Carson was making the boards. Carrie let him know that he was making them in the backyard, where his father had set up a shop for him. Richard Branson said that when he first started his business, his headmaster told him that he couldn’t both stay in school and run his business. Richard said that he had dropped out of 15. Mark Cuban cut in and said that he dropped out at 16, so he waited in an extra year.

Lori looked surprised, and the show went on a quick tangent about how Mark had dropped at school at 16, took graduate-level courses, and got his MBA at 19. He ended up transferring those credits back to high school so he could graduate. Lori asked Richard what his first business was, and Richard explained that he’d started a magazine to campaign against the Vietnam War.

Changing the subject, Richard said that he really liked the boards but Carson had to stay in school. He said that Carson would have to learn how to delegate. He said that too many people think that they can do it all themselves. Mark asked what his deal with Madrid Skateboards was since he wasn’t able to make the skateboards anymore. Carson explained that they were manufacturing the board so that all he had to do was put the wheels and the trucks on.

Robert wanted to know how he could be sure that there wasn’t another 11-year-old the New Jersey making the same product. Carson said that the main reason that skaters purchase products are for brand loyalty. He thought that when people went to buy Locker Boards, they would want an actual Locker Board. He said that the boards were also very hard to make. The person would have to have the right hardware and equipment. Carson also had patents pending on the Locker Boards.

The Sharks all seemed impressed, and Mark told Carson that he was killing it. Lori told Carson that he was amazing but she wasn’t going to invest in the company, and she went out. Mark Cuban wanted to know what Carson’s plan was for the next two years and five years. Carson said that he wanted to be everywhere. The Sharks laughed politely, and Mark told him that was too many places. Richard said that he sounded like one of them.
Carrie said that her son enjoyed selling online because it had low margins, but he would also like to sell his boards through retail stores. She thought it gave him more credibility. He was already in one retailer in California call Jack’s Surfboards. Daymond put his hand on his head as he was thinking. He said that he invests in the company at the moment because that they were growing too fast. Giving up that amount of equity would damage their possibility for growth in the future. He thought that they had a lot of room to grow, and could do it without them. Daymond went out.

Mark wanted to make an offer. He said that he would give Carson $60,000 in exchange for 20% of the company. His plan didn’t involve the manufacturing process. Carson already had help for that. Mark wanted to build up the social media such as Instagram and YouTube accounts. Before Carson could answer, Richard Branson, cut in. He said that he was going to suggest that he and Mark Cuban with together on it. Mark said no. Richard said that if Mark was going to work with them, he would make Carson an offer himself.

Richard Branson offered Carson $65,000 in exchange for 20%. Robert said that he loves things that were: fun, but didn’t think that Carson should sell any of his business at this point is it was too soon. Robert said that he didn’t want any equity, that he would give Carson the $60,000 as a loan with 8% interest. Mark laid all of the offers out for Carson and asked him what he wanted to do. Carson asked Richard what he would do to help his company if he were to invest.

Robert told Carson that he had guts for wanting to interview Richard Branson. Richard said that he saw a young version of himself in Carson. He said that the young entrepreneur was also very articulate and that the product is great. Carson thought for a minute and then accepted the deal. The two hugged, and Carson and Carrie walked off the stage. In his after-interview, Carson said that he chose Richard Branson because he felt like he would help him the most, especially on an international level. He also had the highest and most attractive offer.

Locker Board Now in 2016 – The After Shark Tank Update 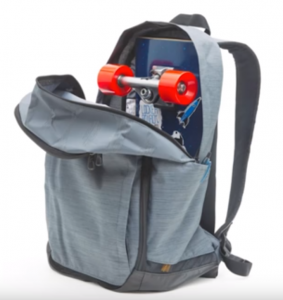 In an interview with business2community.com, Carrie admitted that they were initially gunning for Mark Cuban before they knew that Richard Branson would be on the show. She defined the moment of choosing between the two of them is the hardest moment of Carson’s life. It seems like they made the right choice with Richard. After the episode aired on Shark Tank, Carson’s mom admitted that their sales jumped 200%. Their website traffic saw a similar jump.

In May 2018, Carson wrote an article for the Virgin Mobile blog. He outlined how he had taken his business to the next level. The article was an effort to get the Locker Board brand noticed internationally. Carson also gave a TEDx talk on his business. Take a look at https://www.lockerboard.net/their website if you are interested in shopping for yourself.