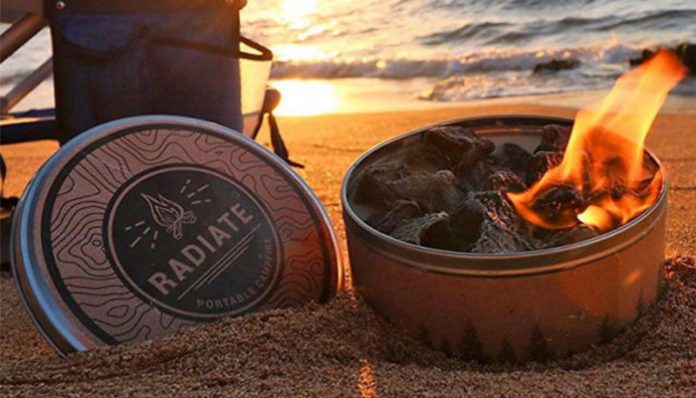 Perfect for camping trips, the Radiate Portable Campfire allows you to start a campfire, wherever you are. Made with paper briquets and 100% recycled soy wax, the reusable campfire may be used for up to four hours once lit. Sleek and portable, it is also more environmentally friendly.

Created by Brent Davidson and Bryan Cantrell, Radiate was launched in September 2017. Two successful entrepreneurs, the pair had known each other for many years, as they were business partners of a beauty product company, one that produced wax. Due to the nature of wax production, they were often left with overages and extras. Put it to good use, they were more often than not put into large buckets, which would then be used to create huge bonfires during camping.

While fun and effective, the fact that they weighed 30 to 40 pounds each, made them highly inconvenient. Regardless, Brent and Bryan always had an inkling that there was “some sort of business simmering there.” In the end, it wasn’t until many years afterward that they came up with the idea of making portable campfires. Left with a bunch of Danish cookie tins from Christmas, Bryan had realized that they were the perfect size for a campfire. With that, he and Brent began to experiment with different waxes, wicks, and packaging. Many hours of hard work later, Radiate was born.

To get the necessary funding for the project, the pair launched a Kickstarter in June 2017. To their pleasant surprise, they soon met their goal of $5,000 in exactly one month’s time. By the end, they had raised $6,200 with the help of 129 backers. Getting to work, they eventually managed to push the product into the market that fall.

Not long afterward, a huge opportunity came their way. In late 2017, it was announced that the founders would be pitching their portable campfire on the ninth season of ABC’s Shark Tank. The episode later aired on January 28, 2018. 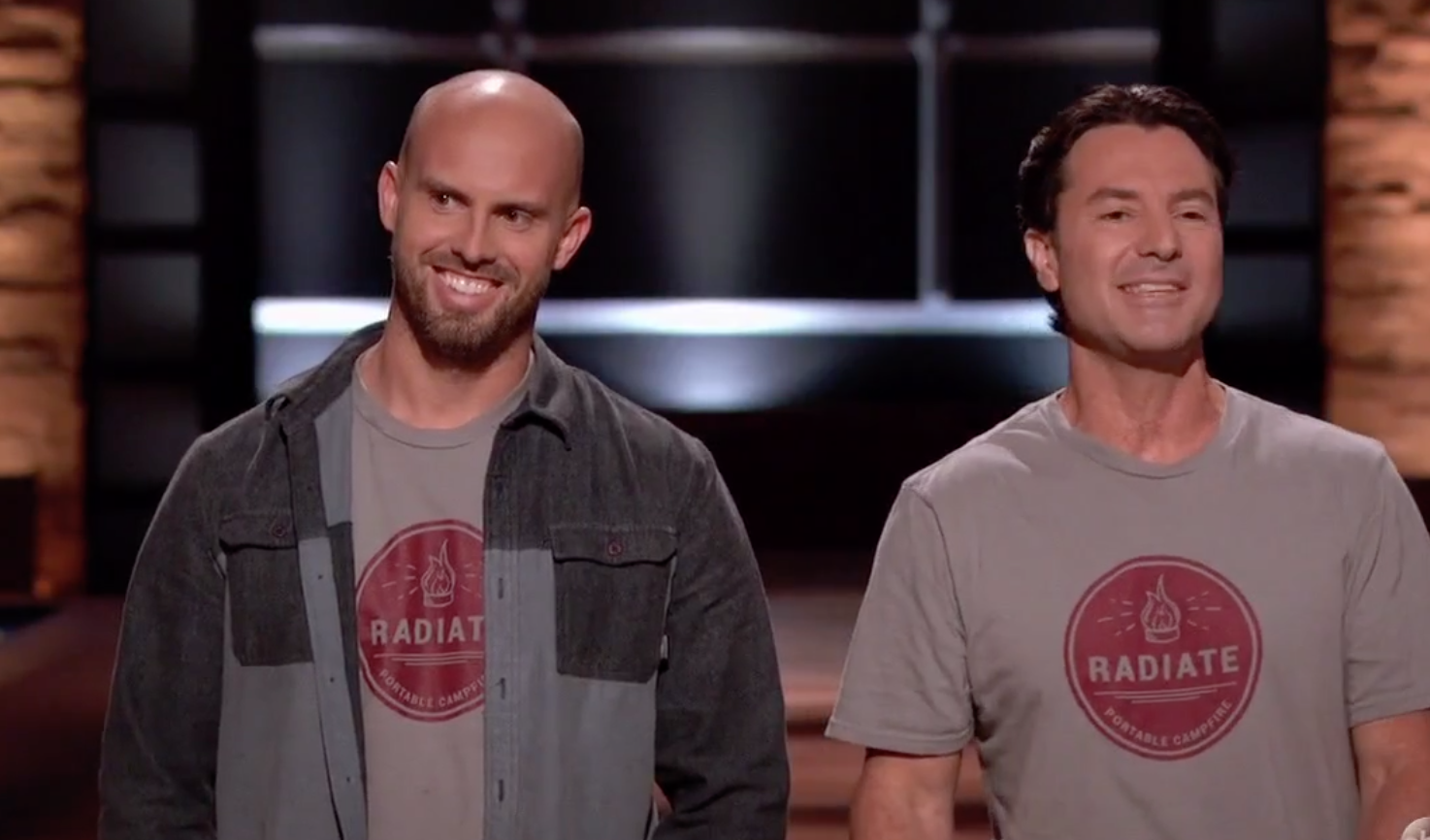 Wearing matching t-shirts, Bryant and Brent confidently stride into the tank. With a smile, they introduce themselves, before stating that they looking for $50,000 in exchange for 20% of their business.

As the beginning of their pitch, Brent states that campfires have been a crucial part to a man’s life, since the beginning of time. While that might be so, however, Bryant subsequently points out that they are difficult to start, maintain, and clean up. Not only that, but it’s a hassle having to fumble around for wood, he adds.

Saying that they’ve solved the problem, Brent subsequently lights what appears to be a tin can beside him with a lighter. Pointing at the fire that he’s just created, he introduces the sharks to the Radiate Portable Campfire—“the most convenient to make a campfire.”

Elaborating about the product, Bryant tells the panel that it’s not only easy to light, store, carry, but it also leaves no trace. As the camera zooms in on the product, he continues by saying that it’s suitable for the beach, camping, tailgating, and even the backyard. From there, they demonstrate how easy it is to put out the fire by sliding the lid across the top—which effectively blocks off the oxygen supply.

Having demonstrated how the product works, the inventors go on to hand out some samples. Walking towards the sharks, they let them know that each of the different colored tins has their own scent. Having been handed a can each, the panel takes the next several seconds to examine the product. While Barbara comments that it is quite heavy, Lori notes that the inside is made out of wax. Given a lighter, Robert subsequently lights his on fire.

Interested in knowing the numbers behind the portable campfire, Rohan asks the two entrepreneurs what they make it for, to which they reply $5.75. Adding to that, they tell them that it retails for $25. Asked how long they burn, Bryant states that each of the cans burns up to six hours, which seems to surprise Lori. 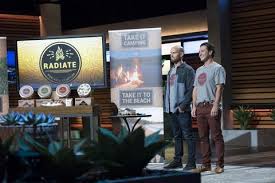 Told that they weigh four pounds each, Mark questions whether or not that would pose an issue for shipping. In reply, Brent states that it costs $9.50 to ship one and $12 to ship two across the U.S. Just as he finishes, Lori raises an issue—that is, she feels that $25 is a high price to pay for just six hours burn time. Before the founders can reply, however, the other sharks chime in to say that six hours is in fact, a long time.

Next, the pair is asked how their product compares to Instafire. Addressing the question, Bryant explains that the Instafire is different in that it is designed to create a traditional fire in a fire pit. Gesturing toward the fire that he had created earlier, he adds that in comparison, the Radiate Portable Campfire is much more convenient.

Elaborating, Bryant tells the sharks that their product is geared more for towards those “who don’t necessarily want to be outdoors for days at a time.” Despite his best efforts, however, Mark doesn’t seem to go along with the idea.

Just as he finishes talking, Rohan asks them for a breakdown of the numbers. Stating that they’ve been shipping for 30 days, Brent reveals that they’ve sold 11,000 units within that period, a fact that seems to impress Robert. Continuing to speak, the Radiate founder tells them that they had crowdfunded 400 units, having successfully raised $1,000 for a proof of concept.

Confirming that they’ve only been in business for 30 days, the founder goes on to reveal that they’ve also sold a few hundred units through some wholesale retailers. Asked which ones, Bryant tells them surf shops, camp stores and sporting good stores. From there, he states that their product had garnered quite a bit of attention when he and his wife had used it while on vacation.

Next, Robert asks whether or not the portable campfire can be used in areas where fires are not allowed. Quick to tackle the question, Brent explains that in most instances, a contained fire such as the Radiate Portable Campfire is allowed. “Easy to turn on and off,” he says, “no one would even know you were there.” 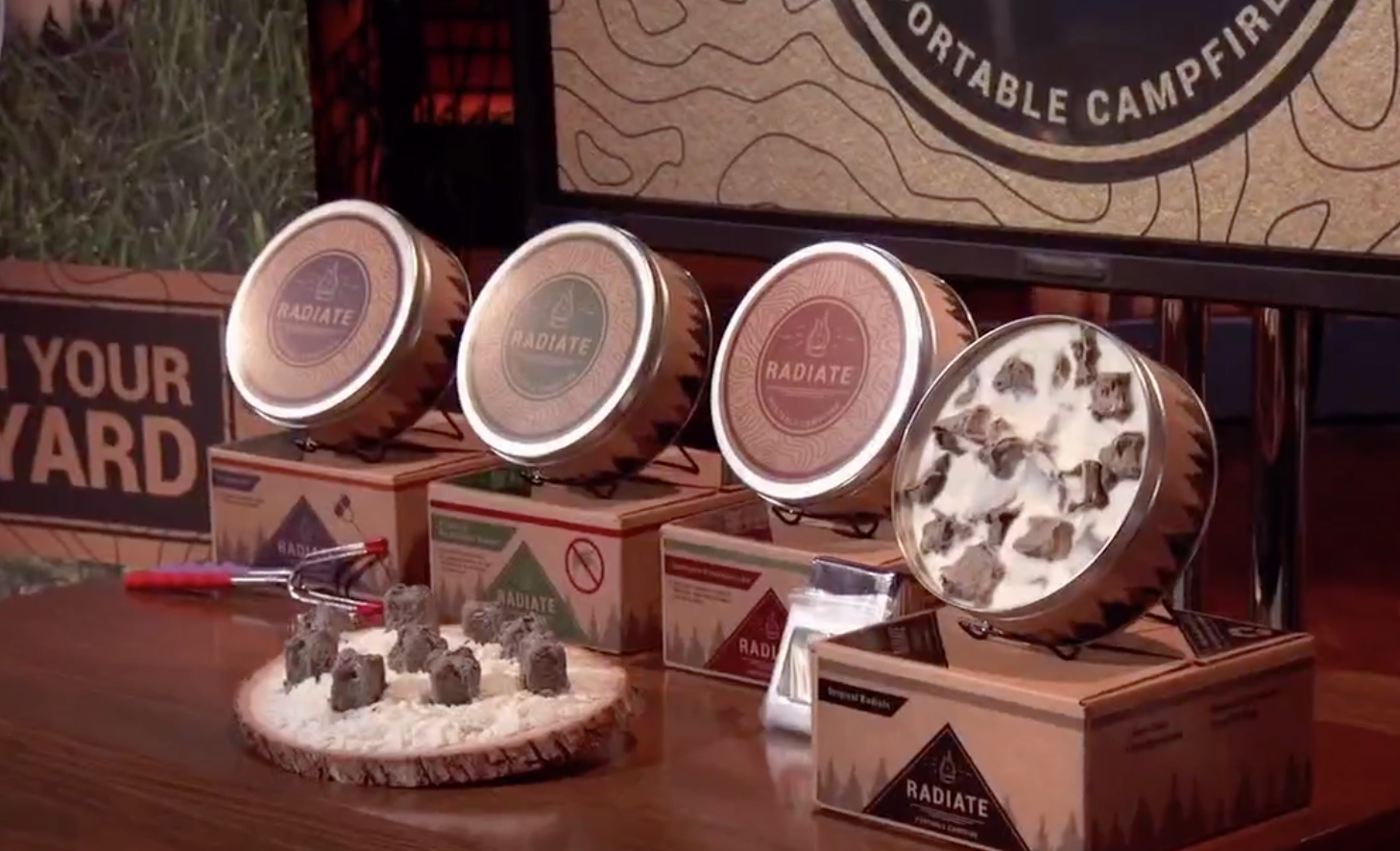 Pointing towards the different cans at the front, Lori subsequently asks whether or not there is a mosquito-repellant one, to which they reply yes. Seconds later, Barbara inquires about the heat of the tin, having noticed that there was no written warning on the product. In response, Bryant says that there is both a warning label and instruction manual inside.

As soon as he states that, Barbara makes them an offer—she is willing to give them the $50,000 for 25% stake. Instead of replying to her offer, however, the founders decide to talk more about the product, which seems to irk the sharks. Before they can do so though, Mark tells them that he is out, as he believes that the can is too heavy and “not original enough.” Comparing Radiate to Instafire, the latter of which she’s worked on with Mark, Lori also backs out.

With two sharks out, the attention goes Rohan. Before he says anything, however, he prompts the founders to reply to Barbara’s offer. Doing just that, Brent tells her that they would love to work with her, despite the fact that she might not be too fond of his engaging personality, which leads to a few chuckles. With that out of the way, Rohan tells them that he is willing to make the same offer as her—$50,000 for $25% equity.

With two offers on the table, the founders look to Robert as he begins to talk about the versatility of the product. Told to make an offer by the other sharks, he eventually gives in and offers them the same thing—$50,000 for a 25% stake. With three identical offers, Brent and Bryant are left to decide who they’d rather work with. 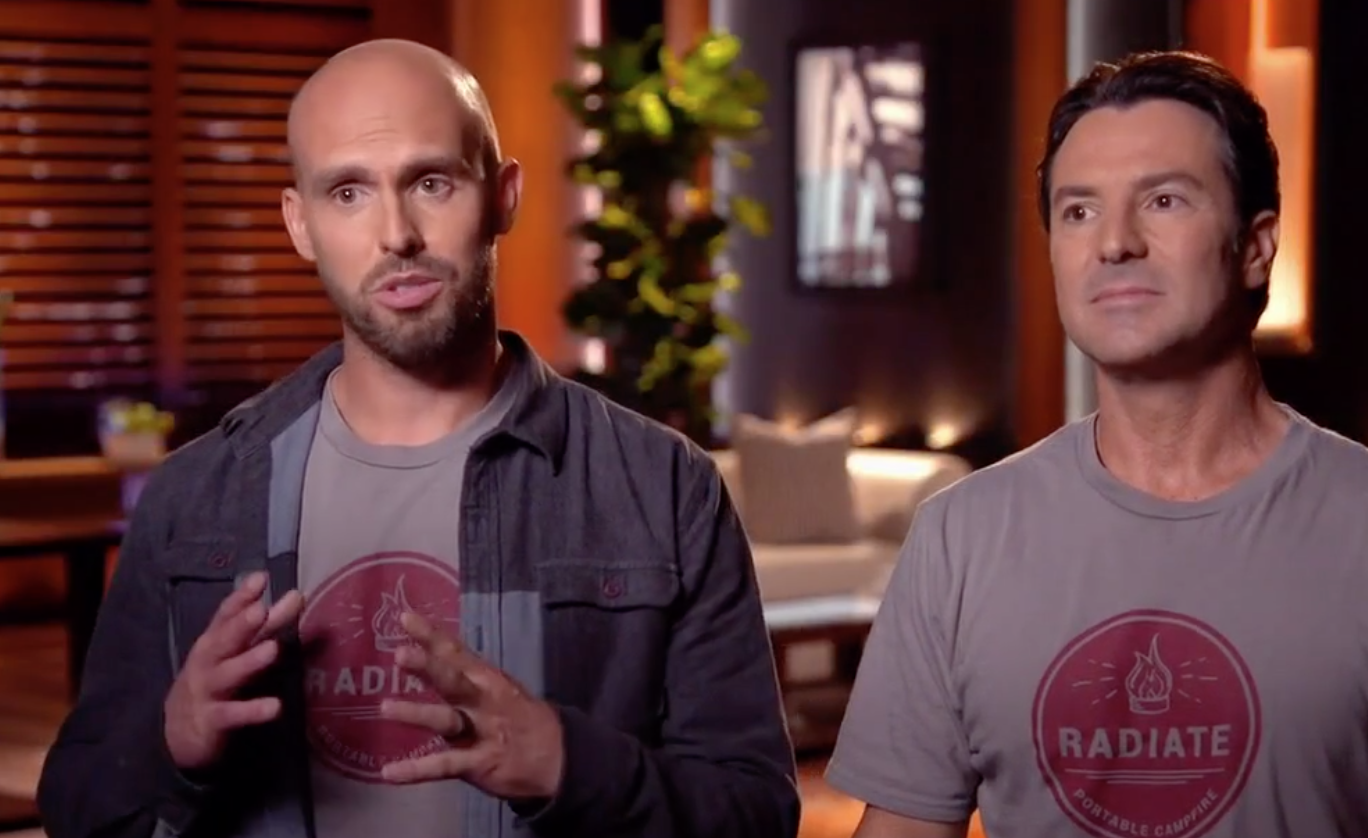 As they do, however, Rohan and Robert get into a discussion. By the end of it, the latter decides to change his offer to $100,000 for 25% stake. Noticeably excited about the turn of events, Brent and Bryant quickly accept the deal. As the rest of the sharks are left surprised, he walks up to the creators to give them both a handshake and hug. Congratulated on a job well down, the two say their final thank you before leaving the set.

In the subsequent interview, Brent reveals that they had ultimately chosen to go with Robert as he was “the most passionate about the product, which was made known with his offer.”

Radiate Portable Campfire in 2018 – The After Shark Tank Update

Many months have passed since Brent and Bryant promoted the product on Shark Tank. What steps have the company taken since? Let’s have a look.

As to be expected, Radiate gained a significant amount of attention after the episode aired earlier this year. For instance, they’ve been featured on several sites such as UrbanDaddy, OutdoorHub, Digital Trends— even the Wall Street Journal! Considering that, it’s not surprising that the campfire in a can has soared rapidly in popularity over the past several months (especially since summer is here, which means more camping trips for everyone).

Since they were on the show, the Radiate Portable Campfire has also been made available on Amazon. An overall success, the product has already racked up dozens of positive reviews on the site—to be more specific, it currently has a 4.5-star rating from nearly 100 users, at the time of this writing. Taking a closer look at some of the reviews, one thing becomes obvious—almost all of the customers agree that the product is both easy-to-use and convenient.

Similarly, the company also has a 4.2-star rating on Facebook. Judging from some of the comments left on their page, the general consensus on the portable campfire appears to be positive. For those who are interested, you can check out their official Facebook page here.

As mentioned earlier, the company’s product has been featured on multiple sites over the past months. Considering that, it’s easy to see how they’ve built up a following on social media. On Twitter and Instagram alone, Radiate has gained over 3,000 fans combined.

Will the two entrepreneurs be returning to Shark Tank for an update on Radiate in the upcoming months? Unfortunately, it’ll probably be a while before we hear anything about it. In the meantime, following them on social media is probably the best way to keep up with what’s going on!