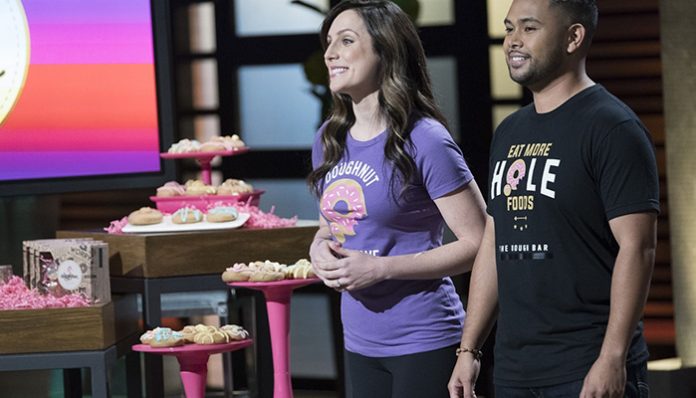 The Dough Bar – Before Shark Tank

A family-owned company, The Dough Bar was founded by Marquez and Ondrea Fernandez in 2015. Tired of buying store-bought snacks, they decided to experiment with one of their favorite treats—doughnuts.

After going through many recipes, they successfully created the DOUGHnut. Compared to the average donut, they’re much healthier as they’re baked, not fried (i.e. less fat and oils). Made from scratch, they’re “an awesome substitute for many flavorless and dry, protein-rich products”, according to their website. Complete with homemade toppings and glaze, the doughnuts are made to order and are shipped directly to your front door.

Big fans of Shark Tank, they decided to try out for the show after learning that they would be holding auditions in their city. Determined to make themselves stand out, a significant amount of time was spent preparing—both by the couple and their staff members. Despite their best efforts, however, they ultimately did not make the cut during their first audition.

A year later, they made the decision to audition a second time. With more experience under their belt, they were more determined than ever to show off what they’d put together. Despite the fact that Ondrea was heavily pregnant at the time, the couple buckled up and drove eight hours for the casting call. In the end, their hard work paid off; it was later announced that they would be appearing in the ninth season of Shark Tank.

Their episode eventually aired on ABC on January 28, 2018.

The Dough Bar on Shark Tank 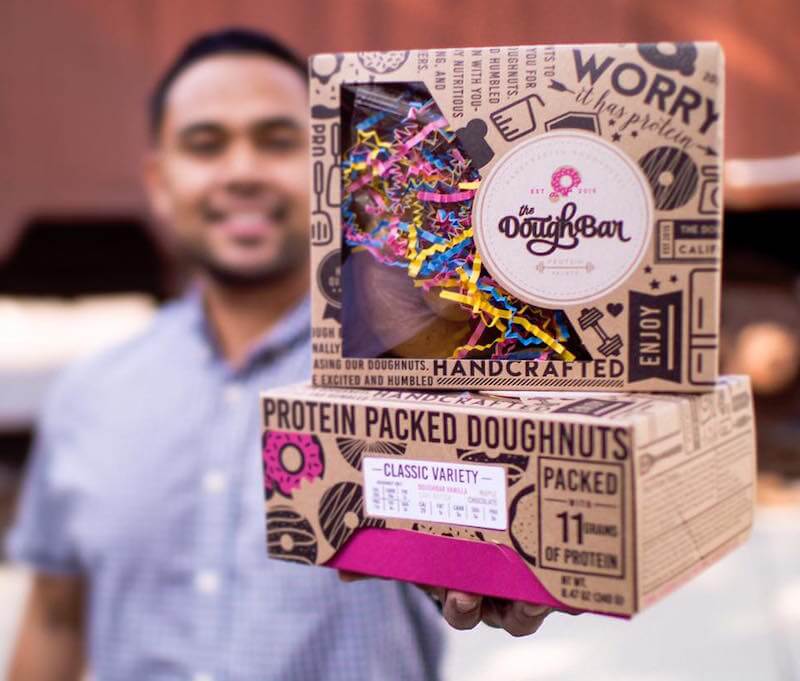 Walking into the set hand in hand, Ondrea and Marquez stop in front of the sharks to introduce themselves and their company—The Dough Bar. Seconds later, they let them know that they are seeking a $300,000 investment for a 15% stake.

Pitching their product, they ask the sharks what they think they’d look like “if they ate donuts every day.” Continuing with their pitch, it isn’t long until a man breaks through the wall beside them—literally. Taken aback, the sharks lean back in their chairs, as some of them break out into laughter.

A professional bodybuilder, Marquez explains that he is able to maintain his physique while still getting his fix “because he eats Dough Bar doughnuts”. Continuing with their speech, Ondrea states that their doughnuts are healthy as they are baked, not fried, low in sugar, and packed with twelve grams of protein each. As she says that, the camera pans to a tray of colorful, glazed doughnuts. 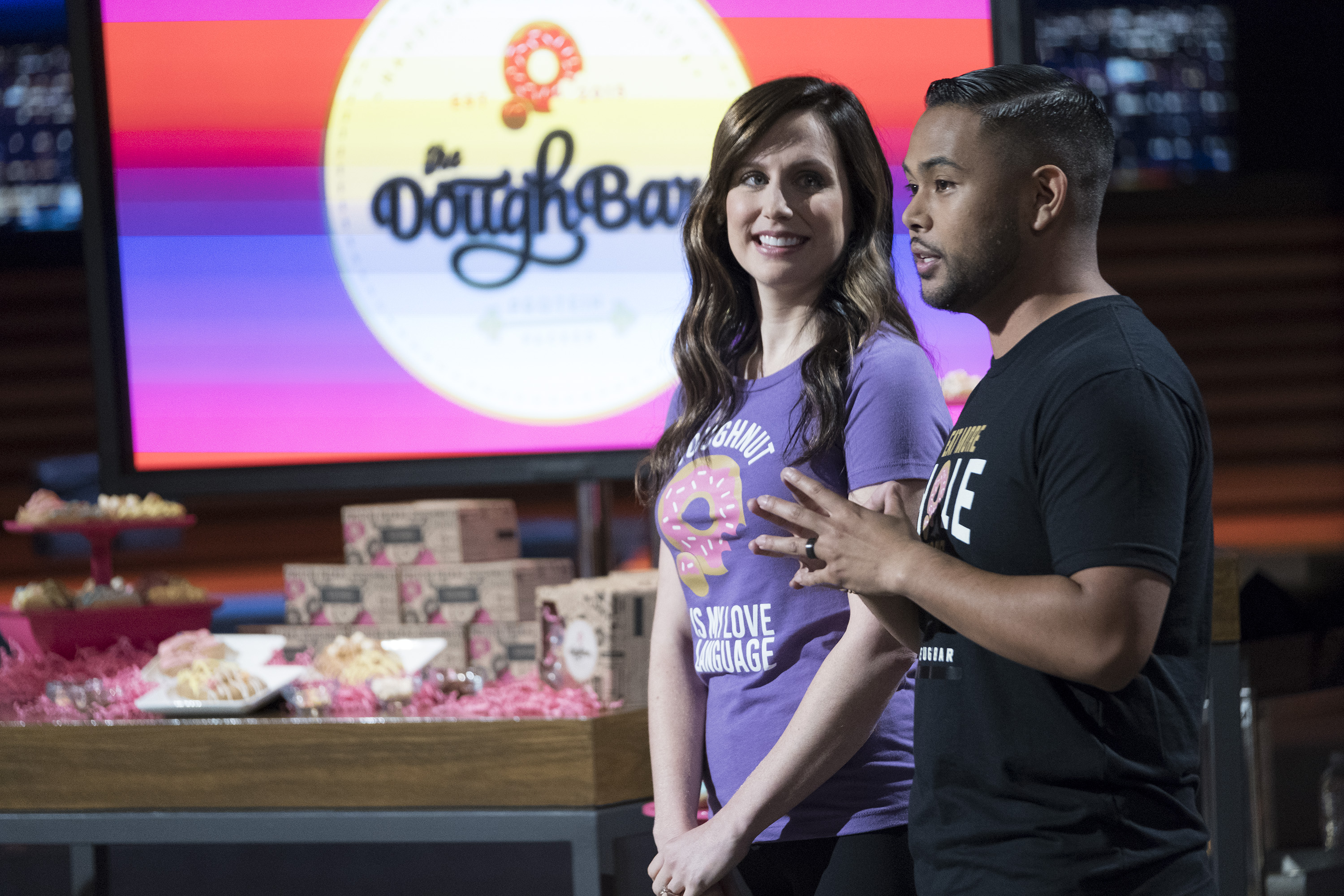 Explaining the process, Marquez tells the sharks they can simply be ordered from their website, after which they are shipped directly to your home, individually packaged. Stored in the fridge, Ondra comments that they can easily be reheated using the microwave. With that, they ask the sharks whether or not they’d like to try some samples.

Moments later, samples are handed out to the sharks by their friend, the bodybuilder. As they examine the doughnut in their hands, Marquez explains that they’ve chosen to provide them with their top two sellers—the Apple Pie Doughnut and the Cookie Butter Doughnut. Going straight to the taste test, the panel subsequently indulges themselves with the sweet treats. Judging from the looks of their faces, it’s obvious that the doughnuts are quite tasty.

Having taken a bite, Robert subsequently asks about the doughnut’s calorie content. In reply, Marquez says that each doughnut—complete with glaze and topping is 200 calories, while the bare doughnut is about 150 calories. With that, the attention once again goes towards the sharks, who are still enjoying their treats. Commenting that it’s chewy, Lori describes the doughnut as being a cross between “a doughnut and a bagel.” 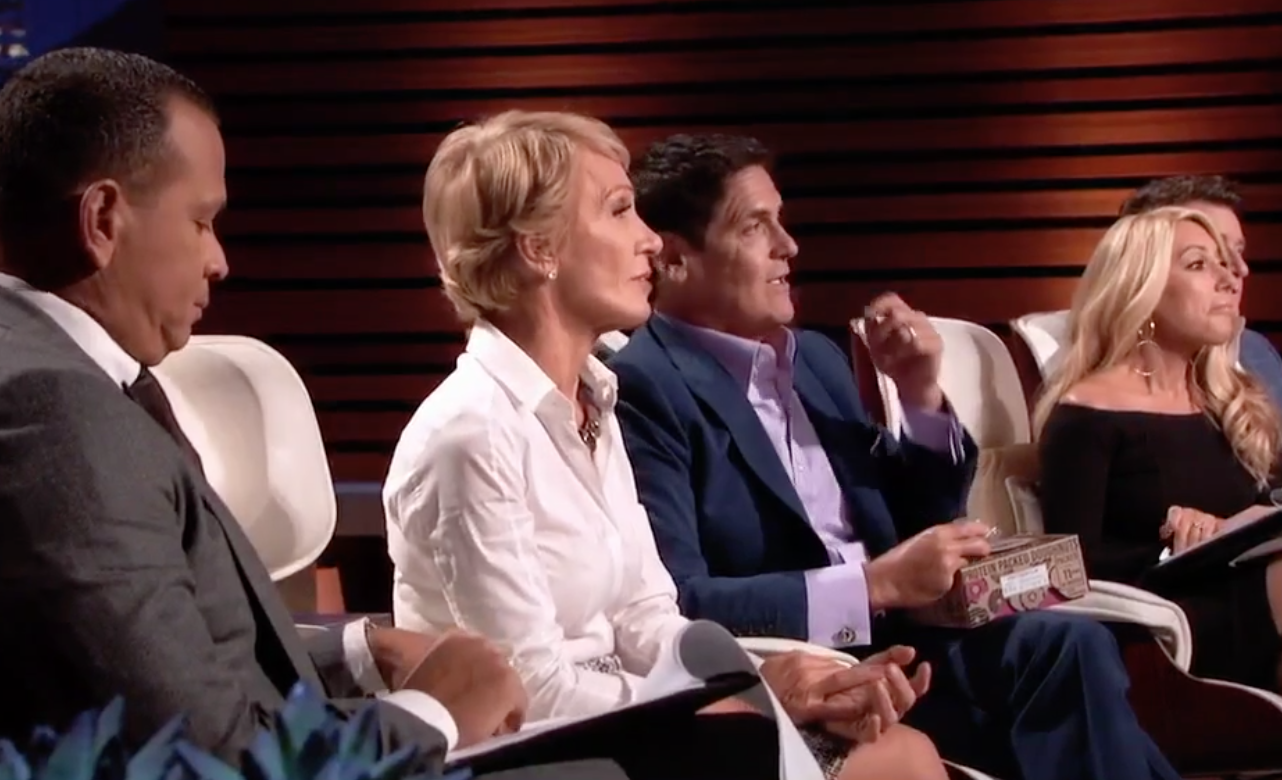 Next, Robert asks whether or not you can buy the doughnuts plain. To that, Marquez explains that each of their doughnuts arrives individually packaged—with the glaze and toppings on the side. As he does, many of the sharks open up their boxes to examine its contents. From there, Lori asks them how long the doughnuts can be stored in the freezer, to which the couple replies that they can be stored in the fridge for 3-4 days.

Sold on the taste, Robert subsequently asks about the pricing. In reply, Andrea states that each box of four sells for $15.50. Upon hearing that they’re rather expensive, Marquez compares the doughnuts to store-bought protein bars, which typically sell for $2 to $4 each. From there, he tells the panel that shipping within the United States ranges anywhere from $5.99 to $8.99.

Commenting that it costs around $20 a box, Robert goes on to inquire about the production costs, to which Ondrea replies that they cost about $7.30, which leaves them with a 53% margin. Interested, Alex asks them how much they’ve sold so far. To that, Marquez answers that they’ve sold over $1.2 million worth from June 2015 to January 2018—a reply that garners some “wows” from the panel.

Elaborating further, he states that they sold over 280,000 doughnuts within two years. When asked what their sales will be this year, Marquez explains that they plan on breaking $1 million. Noticeably impressed, the sharks comment that they must know what they’re doing—to which Ondrea states it’s all Marquez’s work.

Not long afterward, Barbara asks the couple what percentage of sales are repeat orders. With a grin on her face, Ondrea excitedly exclaims that they have 31% customer return rate. Satisfied, Robert goes on to inquire whether or not the doughnuts are made in commercial kitchens. Explaining that they have a co-packer, the creator eventually talks briefly about Marquez’s background—that he had previously worked as a nurse and respiratory therapist.

Curious, Alex asks Marquez the reasoning behind his drastic career change. Revealing a little bit about his past, he states that he has always wanted to become an entrepreneur to help out his family—especially his father who had single-handedly brought him up. Continuing with his story, he tells the sharks that they had come up with the idea of making protein doughnuts one day at the gym.

With the story out of the way, Robert asks them what they plan on using the $300,000 investment for. Replying, he says that they would like to increase their marketing spend as they’re currently on a 5% return. In addition to that, they also feel that they can get the shelf life of their doughnuts to 3 to 4 weeks, which will in turn decrease shipping costs.

With further prompting, the couple shares that they have two other products—a gluten-free cake as well as a protein crispy bar, both of which they plan on using to broaden their brand. Amazed with what they’ve established so far, Barbara eventually makes them an offer—$300,000 for a 30% stake.

A big fan of their doughnuts, Lori is the next shark to make an offer—$300,000 for a 20% share in the company. As the focus goes towards the rest of the panel, Mark breaks the silence by telling them he is out. With the comment that Lori’s offer is hard to beat, Robert eventually also drops out. Not long after he says that however, Alex makes them an offer—$400,000 for a 30% stake, which she will share with Lori. 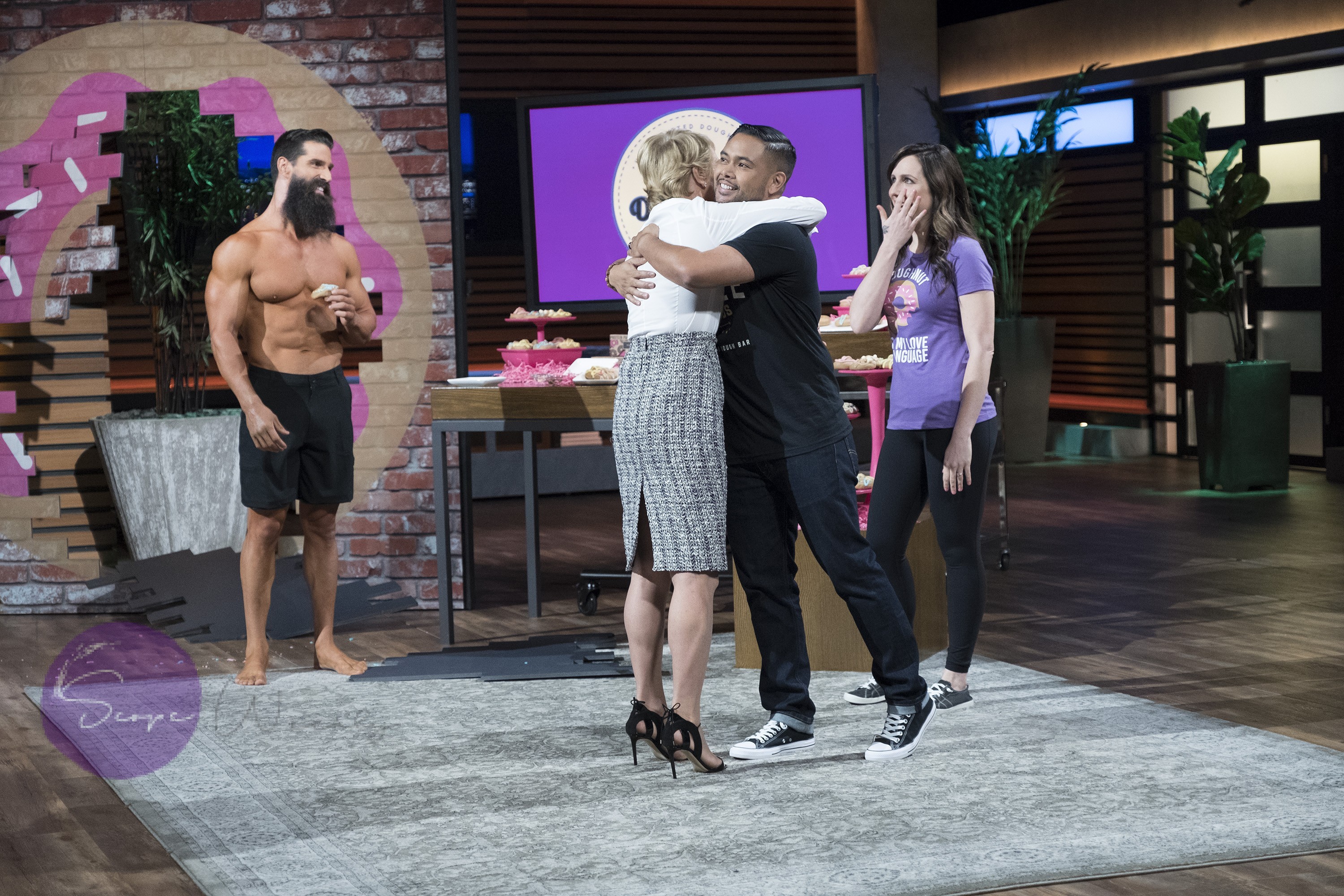 With that, Barbara decides to give the couple some advice—that it might be better to work with one shark than two as that allows for “every decision to be made quickly.” Defending themselves, Alex and Lori are quick to mention that they’ve collaborated multiple times in the past. In attempts to compete with what the two sharks are offering, Barbara soon lowers her offer to 25% stake.

Excusing themselves for a second, Ondrea and Marquez quickly talk amongst themselves, before asking Barbara whether or not she is willing to come down to 20%. To their pleasant surprise, the soon agrees—as to “beat [Lori and Alex] out of the box.”

A done deal, Barbara walks up to embrace the couple in a brief hug. Incredibly grateful, the Doughnut Bar founders eventually exit the tank, with smiles plastered on both of their faces.

What did they do after leaving the set? According to their website, the first thing that the couple did was remedy their hunger by scarfing down “an enormous amount of chicken and waffles”. From there, they returned to their hotel room for a well-deserved nap.

The Dough Bar in 2018 – The After Shark Tank Update

Over half a year has passed since the couple pitched their high protein doughnuts on Shark Tank. How is the company doing nowadays?

After the episode aired, The Dough Bar saw an influx in sales—a trend that is typical with the show. If the popularity of their social media accounts are of any indication, the company seems to be doing fairly well. In fact, they have added a number of new flavors over the past few months including Savory Nacho Cheese, S’mores, Oreo Cheesecake.

Speaking of new products, their rice crispy treats (the ones that were mentioned on the show) have since also been released. Vegan and gluten-free, they are similar to their trademark doughnuts in that they are packed with 15 grams of protein. As with the rest of their baked goods, they can be ordered directly from their official website.

In terms of where to buy their doughnuts, their products are now available in several retailers across the U.S. (whereas it was mostly sold through the website before the show). Curious to know where you can grab some of their sweet treats? You can easily find out by using their store locator here. At this time, their baked goods are only available for purchase in the United States.

Of course, you can also choose to order your doughnuts directly from their site. Made in batches, the goodies are shipped out every Monday. For your convenience, there’s even a countdown timer at the top of their main page, that tells you exactly when the next batch is to be sent out.

Active on social media, as mentioned earlier, The Dough Bar recently hosted a giveaway on Instagram, in honor of Independence Day. Not only did the winner receive an 8-pack of protein packed doughnuts and a box of crispy bars, but they also won an American Flag Weight Belt from Cardillo Weight Belts.

Will Ondrea and Marquez be returning to Shark Tank for an update any time soon? Unfortunately, it’s hard to say at this point in time, as their appearance on the show was relatively recent. If anything, it might take a while before they’re invited back in front of the cameras.