The Seventy2 Before Shark Tank

Christian Schauf grew up in Wisconsin surrounded by farmland. He got a bit of a culture shock when he moved to Los Angeles and discovered that people freaked out when there is a little bit of rain. He decided to solve that issue with his business Uncharted Supply Company, and a new product called The Seventy2. The Seventy2 is a bug out bag for any emergency that you could think of. Christian and his co-founder, Mike Escamilla, decided to see if their product would take off. They put it on Indiegogo and raised $491,000 in one month. The project made 1649% of its original goal. Let’s see if they were able to sway the Sharks into thinking it was just as valuable.

The Seventy2 on Shark Tank 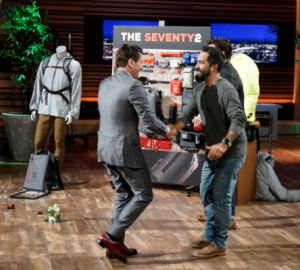 Christian and Mike walked out onto the stage and faced the Sharks. Before they could introduce themselves, Barbara turned to Robert and said that they were her kind of people. They look like mountaineers. The two entrepreneurs on stage smiled and went along with the introductions. They asked for a hundred thousand dollars in exchange for 5% of their company, Uncharted Supply Company. As they spoke, the wall that was built on the stage began to shake.

Barbara looked on in horror as pictures began to fall off. Finally, the shaking stopped. Mark asked if it was the big one, and Mike answers that hopefully, it was. He said that the world was changing and natural disasters and earthquakes were on the rise. He said that with the growing population it was getting more difficult for emergency personnel and first responders to help out. Christian cut in, stating that the majority of survival situations were resolved within 72 hours. However, what a person does within the first 72 hours could be the difference between life and death.

Mike said that they had a solution to that issue, and they went to clean up the stage. They kicked away some of the broken glass and revealed a new panel that was stocked with their products. Christian stated that it was called The Seventy2, which was of selection of tools and information that would help people survive during a disaster. He claimed that what was on the panel would help people survive in hundreds of situations with products such as dried food, water filtration, shelter, and air filtration.

They claimed that it was the smartest products like it and that they had a reasonable price. Mike said that they designed The Seventy2 in order to prepare and educate people about whatever could possibly happen. They ended the presentation by saying that they had samples to hand out. Mike and Christian handed out backpacks filled with supplies to each Shark.

All of the Sharks seemed pretty thrilled with their samples. They said that it was the best goodie bag that they’ve gotten in a long time. Robert teasingly told Barbara that he knew what he was getting her for Christmas. He wants to know if everything on the board was in the bag. Christian confirmed that that was the case.

Robert wanted to know what some of the key safety items that were in the backpack. Christian said that it was in about any one item. Since they were designed for different possible disasters, it was about having the right thing at the right time. He pointed to a power bank that was also a crank radio, flashlight, and a cell phone charger.

Rohan Oza, the guest Shark, asked the two entrepreneurs about their backgrounds. Christian said that he started the company, and he worked in Wisconsin on a dairy farm. He’s experienced outside life and then moved to LA. He was surprised that the lack of knowledge about how to survive that he encountered in LA. Rohan agreed that Los Angeles California was a very delicate city. Christian said that his partner, Mike, was from LA so he hated being called out like that. Christian continued, stating that if rain was going to stop everyone in their tracks, then what would happen when the big earthquake hit.

Christian started to research a product that he thought would protect him. He said that he couldn’t find something that was already on the market that would be good for him. Mike said that he thought it was almost dangerous. People would think that they were buying something to protect themselves, and it wouldn’t work. He said that another danger of people buying items that they don’t know about is that they might not know how to use it. He told the sharks that the directions were printed on how to use each item.

Robert said that he thought it was a great idea. People were bad at anticipating disasters happening. He wanted to know about the numbers in the sales. Christian said that they had started about six months ago, and had made $700,000 since then. The sharks were impressed, but Christian wasn’t done. He told him that he had sold those items across 64 countries. Mark wanted to know how much they did in crowdfunding. Christian let them know that they did $400,000 in the first month. All the other sales were through their website.

Lori wanted to know the price difference between The Seventy2 and the other bug out bags on the market. Christian let her know that they were a little bit more expensive. He told her that their bags were $350. The Sharks didn’t seem outraged by that, but that might have been because Kevin O’Leary was not on the show that day. Rohan asked how much each bag cost to make. Christian admitted that in their first round of manufacturing, the bags cost $209 each. They are concerned about getting every item right.

After six months of trial and error, they were able to get the price down to $144. Mark asked them if they were making a boatload of money, and Christian told him that they would hit about $300,000 in profit this year. He hadn’t taken a paycheck yet and they had just purchased 3000 units. Mark wanted to know why they had purchased so many items at one time. He also asked them what their lead time was, and where they were manufacturing them.

Christian said that they were having difficulty with the factories since they were such a small business. The lead time would get extended from the original estimate. The bags were assembled in a warehouse that employees handicapped people, so they were able to find a charitable solution there. Barbara said that he thought that they were very authentic. Lori said that Barbara might like them for other reasons. Barbara insisted that that wasn’t true, and the men might be attracted to her but she was a married woman.

The entrepreneurs laughed, but Barbara wasn’t finished. She said that she was married to a man who had fire extinguishers in every room of the house. He was very prepared and kind of hoping for doomsday. She decided that she would purchase one of them, but she didn’t want to get involved in the deal. She went out. Mike and Christian thanked her.

Mark Cuban was up next. He said he didn’t feel like they need a lot of mentorships, just money. He asserted that he didn’t like being just a money, so he was going out. Christian nodded and looked at the other Sharks. Robert was up next. He noticed that they had execution and operational challenges, but felt like those could be overcome. He also felt like they need a little bit more money. He decided to offer $200,000 in exchange for 10%. It was more money but the same valuation.

After Christian and Michael walked off the stage, Lori said that she thought that when awfully. Robert was very excited about the deal, stating that it was the first time in nine years that he’d been able to pull it off. He told Lori that he had cut her off because he knew where she was going with the deal. Lori agreed, stating that she thought that she could get women to buy the products. She asked him how he was going to tackle that issue, and the other Sharks said that he would just come to her.

The Seventy2 Now in 2018 – The After Shark Tank Update 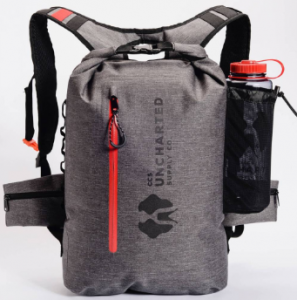 Since accepting Robert’s deal, Christian told Business 2 Community that they were having a lot of trouble keeping the bug out bags in stock. They were working on new content for the bags as well as new products altogether. The existing product, The Seventy2, was selling as much in a day as they used to sell at a month. The product itself hadn’t changed since the episode aired, but the company was working on developing new things. In addition to the back, their website sells refills for the items inside. Click here if you’re interested in purchasing one for yourself.