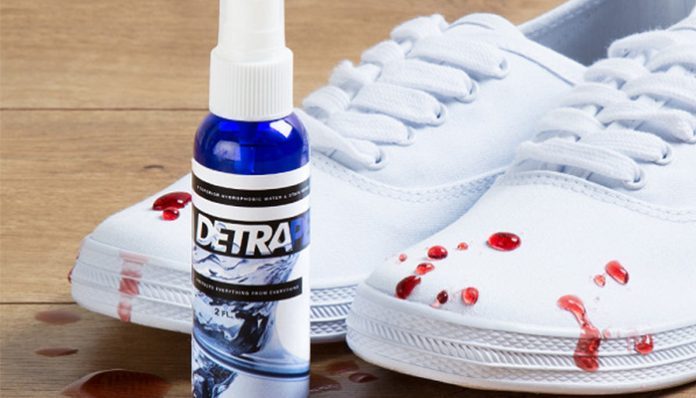 A long-lasting, non-toxic, stain preventer, Detrapel can be applied to a multitude of surfaces including plastic, fabric, concrete, wood, and more. Eco-friendly and biodegradable, it does not alter the color or texture of the surface and can last for more than a year. Today, the product is used not only by individual consumers but businesses as well.

Founded in 2013, DetraPel is the brainchild of David Zamarin, an entrepreneur from Philadelphia, Pennsylvania, who had previously launched a successful shoe detailing service called LickYourSole. A sneakerhead, he had come up with the idea of making a non-toxic spray, after failing to find a way to keep his collection clean without the use of toxic chemicals. After a great deal of research, he successfully developed a hydrophobic solution―one that made use of decomposed lotus leaves. In act, it was so safe, that it could even be sprayed into one’s mouth (though highly not recommended).

Testing it out, he soon realized that he had put together an all-in-one protective coatings product. By varying the formula slightly, he eventually made it so that the product could be used on a variety of surfaces―including wood, metal, fabric, etc. Within a year, the company had signed with a number of retailers in the Philadelphia area, including Dr. Denim. Aside from that, they also sold their products directly to consumers online.

By 2015, the company was well on its way. In fact, its success had led it to be featured by a number of sites such as Hatchpad, Huffington Post, and Biz Journals, to name a few. Still, it was obvious that there was room for growth. As fate would have it, it was later announced that the founder would be pitching the non-toxic spray on ABC’s hit show Shark Tank. Featured in season 9, the episode ultimately aired in the U.S. on January 7, 2018. 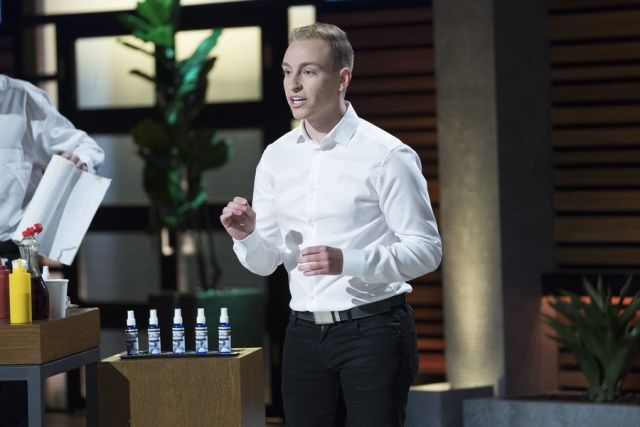 Walking into the tank holding a cup, David “spills” a bit of the beverage on himself, before making it to the front of the set. Recovering from the incident as the sharks laugh, he introduces himself as the founder of Detrapel. Continuing, he tells his audience that he’s seeking a $200,000 investment in exchange for 20% equity stake.

Gesturing towards his shirt, he comments that a spill can easily ruin someone’s chance to make an amazing first impression―like what he’s trying to do in front of the sharks. To their surprise, however, he soon rips off the dirtied shirt, to reveal a clean one underneath. Pointing at it, he states that it is a super shirt, one “that won’t let you walk into a situation looking like a mess.” Elaborating, he reveals that it has been treated with his product, Detrapel.

Demonstrating its effects, he goes on to pour a cup of coffee on himself. To everyone’s amazement, however, the liquid slides right off onto the ground. Putting the beverage down, he explains that Detrapel is a superhydrophobic, liquid-repellent spray that is made to keep things clean. As the camera zooms in on the product, he elaborates by saying that it is capable of shielding items from liquid-based substances, 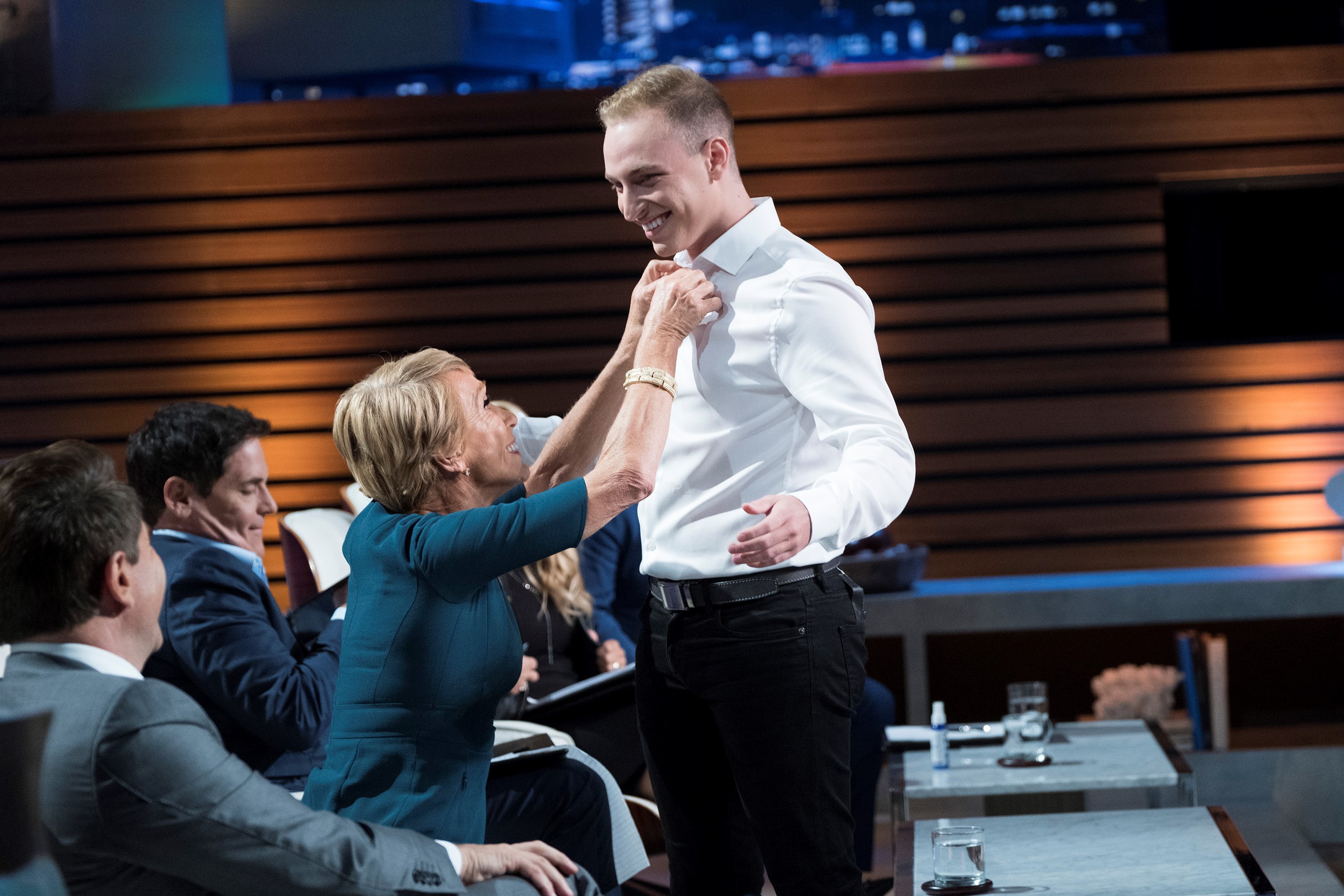 Giving another example, he sets down a glass of wine on the table. Seconds later, it is poured onto a carpet, one that has been treated with Detrapel. As with his shirt, the red liquid soon slides off the surface. Impressed, the sharks look on as he moves on to his next example―a pair of shoes, which retains its white look despite being dipped into a tub of muddy water.

Continuing on about the product, David states that one application lasts a whole year―with no glossy barrier or discolouration. Completely non-toxic, the formula is so safe that it can even be ingested, he explains. With that, he ends his pitch by telling the sharks that they need their help as a young, growing brand.

Almost immediately afterwards, Barbara asks the entrepreneur how he came up with the idea. In response, he tells her that he has always been one to take good care of his things. Continuing his story, he shares that he had thought of the product, after wanting to protect a couple of Jordans, without the use of toxic chemicals. Pivoting the idea, he reveals that he eventually started a shoe cleaning business, which did $25,000 a month in services. 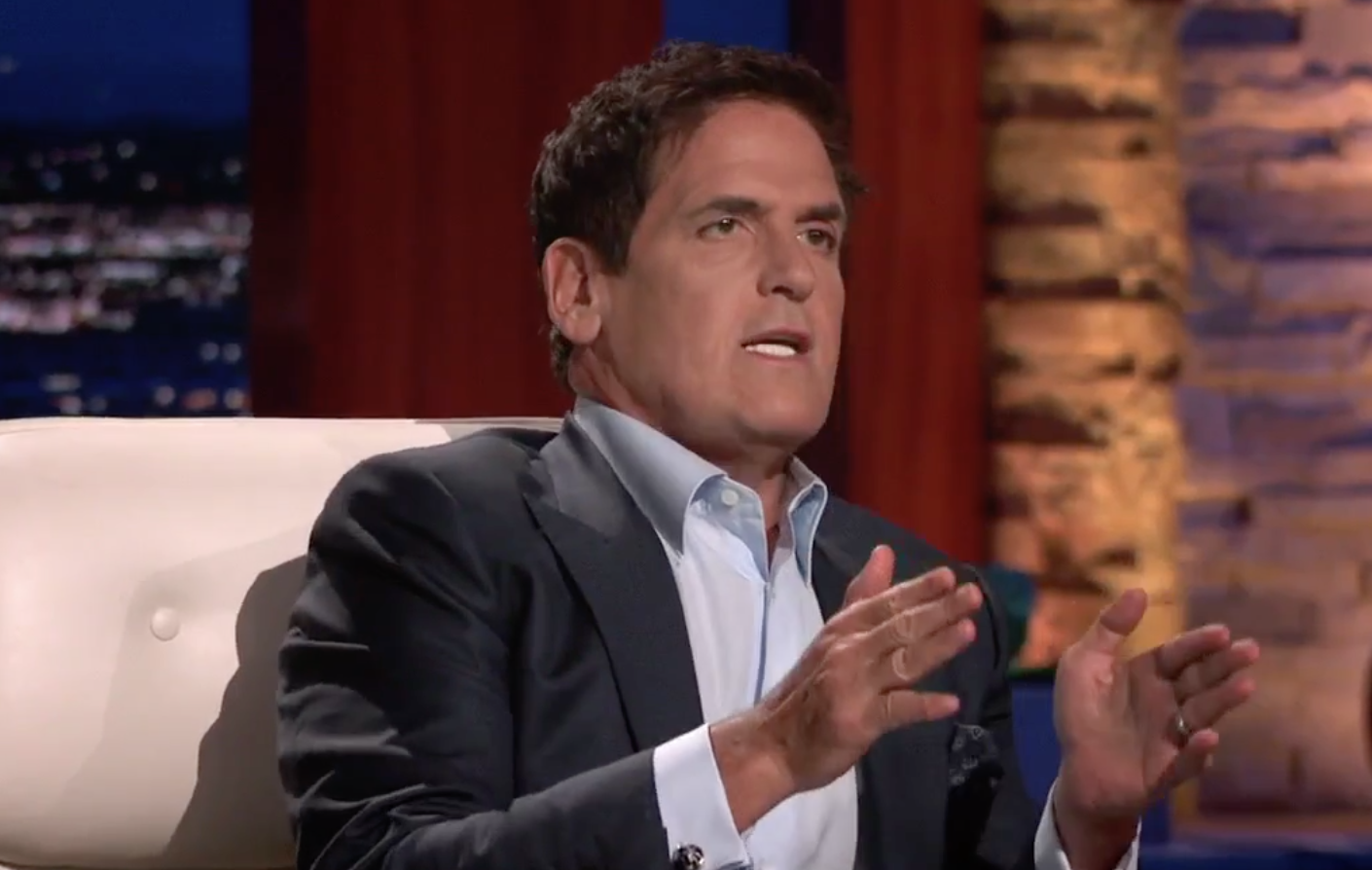 Asked why he got rid of the successful business, David divulges that he had received an offer to sell for $150,000, which he took. Clearly impressed, a few of the sharks go on to give him a small round of applause. Giving them his full attention, he says that he has since put all the money into his new company, Detrapel.

Realizing that he’d done all that in high school, Barbara goes on to ask about his age, to which he replies that he is nineteen. Shocked, the sharks once again give him a round of applause. Carrying on where he had left off, he states that he eventually went on to study nanotechnology, which is the basis of Detrapel. Elaborating, he tells them that he had developed the formula at a lab over a summer.

On the topic of nanotechnology, Lori asks whether or not the product would go through the skin. In response, David explains that they use a water-based formula, which is the main reason why they are non-toxic and eco-friendly. Elaborating further, he tells her that the skin has also a natural wax layer which would block it from going in.

Prompted about the manufacturing process, David reveals that their initial manufacturer had gone bankrupt a few months into the project―taking their property par with them. As a result, he explains, they went into a three-year hiatus, as he worked to re-engineer the formula.

Asked about the story’s ending, David reveals that they no longer have the initial formula. Continuing, he states that they’ve since recreated the formula in the lab, which is 100% theirs. With further prompting, he tells the sharks that they’re on track for $350,000 this year. Inquired about their main customers, he says that they mainly sell to other businesses, who sell furniture and carpet. 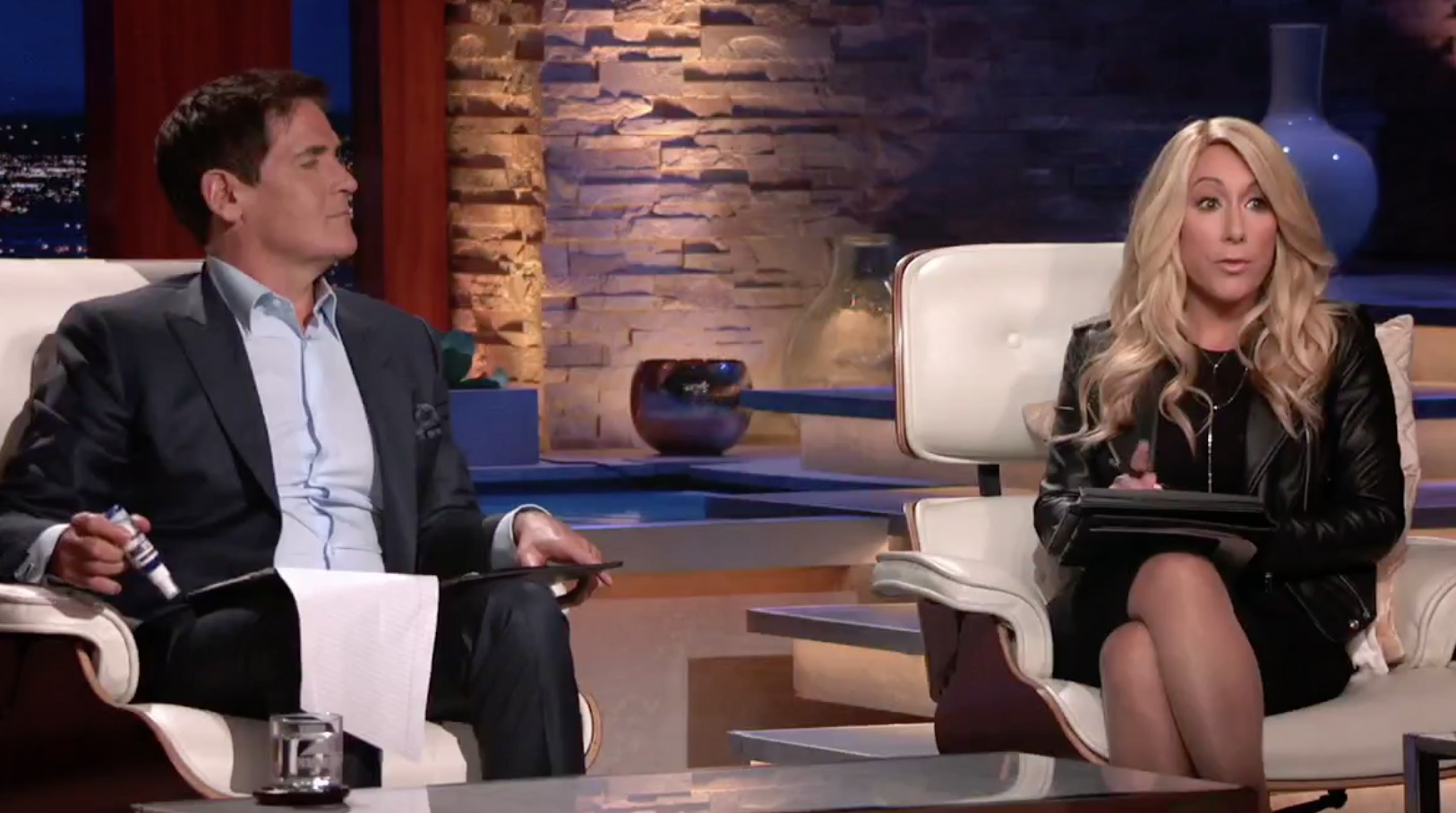 Curious to know more, Lori asks David whether or not any safety testing has been done. Nodding, he confirms that they not only adhere to all of the EPA regulations but have had FDA testing done. From there, Robert asks about the product’s price, to which he is told that the sample sizes sell for $12.99, while they cost $1.14 to make.

Impressed at the margins, Robert goes on to ask about possible knockoffs. In response, David reveals that none of the largest nanotechnology companies in the world has been able to replicate their formula. Almost immediately, the shark notes that it’s too good to be true. From there, Mark chimes in with similar concerns, to which he is told that no one would be able to remake the product, even if they were to be given $200,000.

Cutting to the chase, Mark decides to make him an offer―$200,000 for 25% stake, in addition to putting him in touch with other nanotech companies “that know their stuff.” Just as he’s able to reply, however, Lori surprises everyone by saying no. Interested as well, she also gives him an offer―$200,000 for 25%. With that, David asks whether or not there is a possibility that the two sharks can partner up.

To his dismay, however, the sharks seem iffy with the idea. Asked about his ultimate goal, David states that it is to become “an actual chemical company”―one that creates an array of protectant products. Elaborating, he points out that they work on the nano level, while most of their competitors focus only on one thing. Chiming in, Rohan soon also makes him an offer―$200,000 for 25% stake.

Asked what expertise he needs, David admits that he needs help on the business side of things. Having heard that, Mark subsequently agrees to partner up with Lori. Noting that they can complement each other, the shark goes on to reveal that he also has some strong investments in the nanotech industry. 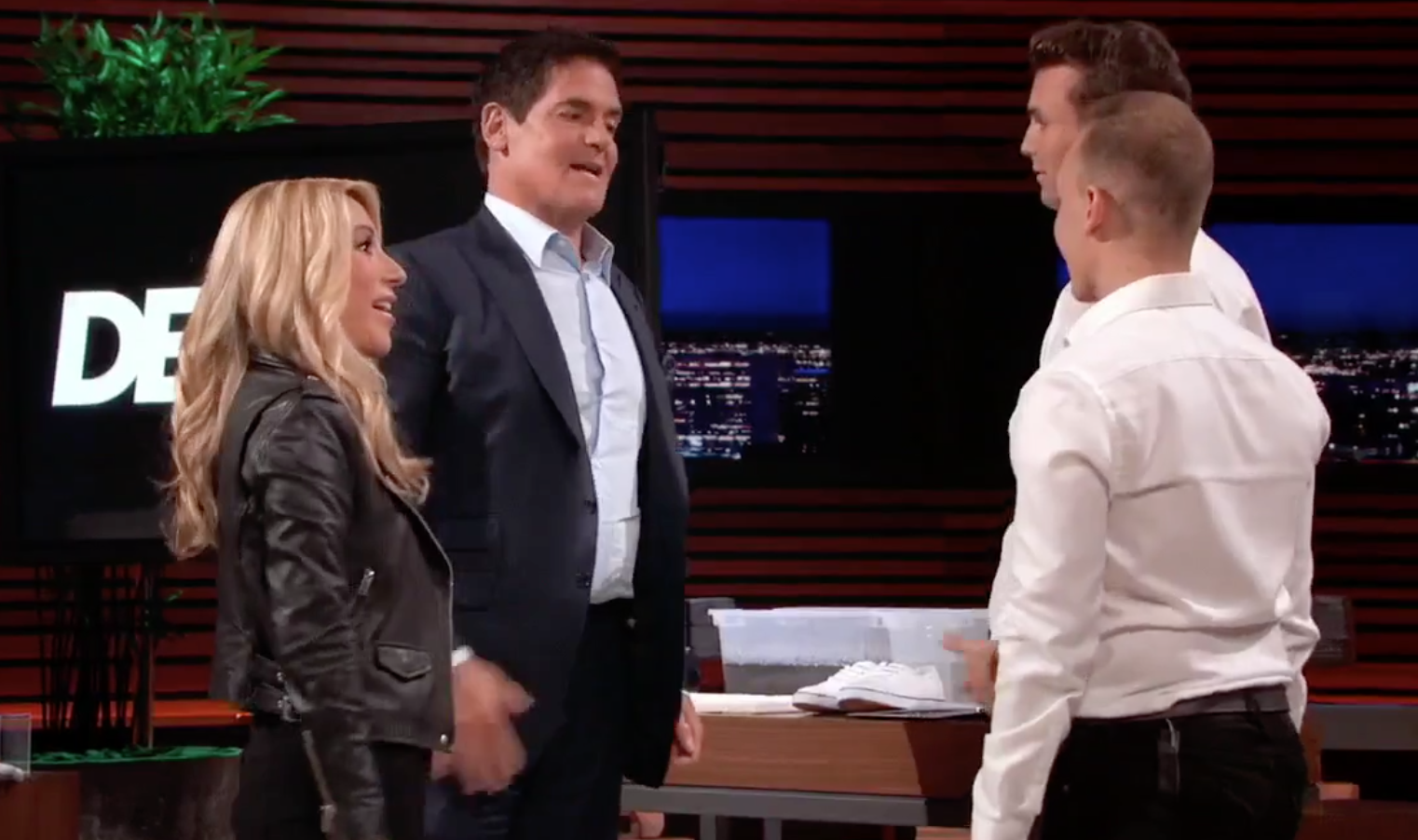 Moments later, Robert expresses that he’d like to partner up with Rohan on an offer. Sweetening the deal, he offers him $200,000 for 23% stake, which Rohan agrees to. Pointing out the fact that he already has two lucrative offers, Barbara subsequently tells him that she will be backing out. With that, David is left having to decide between the two duos.

Asked what he’d like to do, David contemplates his options for a few seconds, before agreeing to Lori and Mark’s deal. As if on cue, the two sharks eventually go up to give the entrepreneur a brief hug.

Detrapel in 2018 – The After Shark Tank Update

It’s been many months since David walked away with a $200,000 deal from Mark and Lori. How are he and the company doing nowadays?

Two months after appearing on the show, Detrapel began to ship out their orders. In fact, they’ve become so popular (10,000+ sales) that there is currently a two-month back-order on their site―which had received a huge spike in traffic following Shark Tank (at one point, they received 9,000 hits per second!). On the topic of the growth, David has also revealed in a recent interview that the company has started to hire full-time staff in order to keep up with the product’s demand.

Not only that, but they’ve also landed a few international deals with parties that are willing to pay up front for a whole year’s worth of products. In David’s words, “Shark Tank had literally changed [his] life.”

What Customers Think of Detrapel

Currently, the protective spray has a 3.5-star rating on Amazon, out of over a dozen reviews. Looking at some of the comments, most users are satisfied with the product, though some have experienced issues with effectivity. Nonetheless, the general consensus on the site is positive.

On their official Facebook fan page, the company has a 4.4-star rating, which is significantly higher than what they have on Amazon. Though some agree that it’s quite pricey, most if not all of their customers have lauded the product’s effectiveness. For those who are interested, you can visit their page here.

Will David Zamarin be returning for a Shark Tank update anytime soon? Unfortunately, it might just we a while before we see the young entrepreneur back on the show. If anything, the recent press that Detrapel has received has been keeping him busy these few months (not to mention that he had just recently appeared on the series earlier this year!).