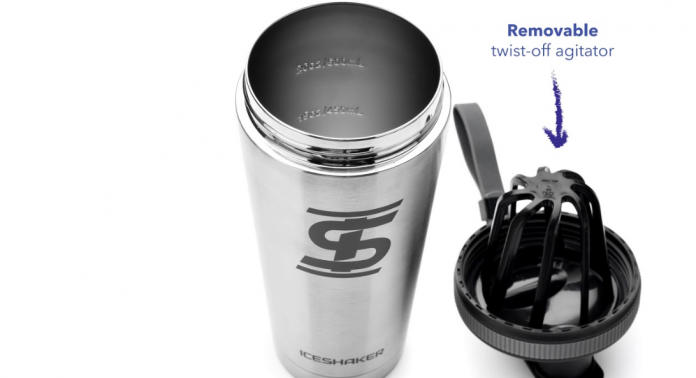 Chris Gronkowski was not about to be overshadowed by his taller, athletic brothers. In 2016, the ex-NFL Dallas Cowboy saw a need for an odorless shaker bottle that would keep his protein shakes cold for hours. He had recently gone back to the gym after he’d gained weight following his departure from the NFL. He improved on the design of the traditional shaker bottle and took it to the next level. Before appearing on the Tank with the Ice Shaker, he sold it on Amazon and his own website. He made almost $100,000 in the first 8 months of business. With a former athlete and a team owner in the audience, it would seem like Chris had a good chance of taking his new project to new heights. Let’s see if the Sharks agree. 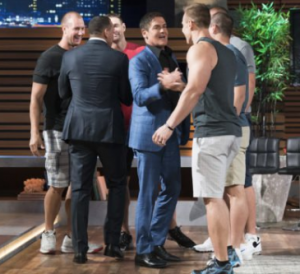 Chris introduced himself as being from Dallas, Texas. This got a nod and a “Yeah!” by Mark Cuban. Chris continued and said that his company was Ice Shaker. He requested $100,000 in exchange for 10% ownership stake in his company. He began his presentation by gesturing towards his muscles, and telling the Sharks that they could tell that he worked out. He said that in a family of five boys, he had to become the strongest since he was the shortest of five sons.

He said that anyone who hit the gym would know what a shaker bottle was. Chris himself had cabinets full of them. He complained that all of the shaker bottles on the market looked exactly the same – cheap, plastic, and uninspired. He had problems with them either leaking or breaking. He saw the smell that developed in the plastic shaker bottles after a few months of consistent use as their worst feature. He claimed that his product, the Ice Shaker, was a much better alternative. It was stainless steel, double walled and vacuum sealed. Chris said that it could keep ice frozen for over 32 hours.

He also insisted that the insulated bottle would not sweat because it was a kitchen grade stainless steel. It would not hold onto the odors of the protein shakes, even after many uses. Chris said that he had some people here with him to help him demonstrate the product. He called his brothers out onto the stage, saying that the Sharks might recognize them. Four very large men came out onto the stage. They were all wearing Ice Shaker bottle T-shirts and cheering loudly as they ran onto the stage. The Sharks all laughed in recognition.

Chris introduced his brothers as Gordy, Dan, Rob, and Glenn Gronkowski. They said that together, they were the Gronks. The Sharks laughed again in delight. Chris continued with his presentation, saying that after he and his brothers hit the gym they like to stay hydrated. He said that Gronks way of getting it done was with the game flip cup. They had a table set up on the stage for them to play the Shark Tank Ice Shaker Championship Cup. Chris explained the rules. He said the first team to drink the water in the cup and flip the cup over winds. He said that the team that loses would have to drink a warm shakeout one of the chief plastic sweaty cups over there. He invited all of the Sharks onto the stage, stating that they were going to play Sharks versus Gronks.

The Sharks all got up on stage and introduced themselves to the Gronkowski brothers. Barbara said out loud that she didn’t think that they were going to be involved but still took her place at the table. The game started with Alex Rodriguez, the guest Shark from major league baseball, and Chris. Each of them down to their water and the turn moves to the next people. There is chaos as the game continued, with the Gronkowski brothers inevitably winning. Chris said that they knew that the Sharks like to win, so they brought them consolation prizes anyway. Each of the Sharks received an Ice Shaker bottle.

Kevin O’Leary immediately started in on the valuation. He asked Chris to explain more about the million dollar thermos bottle. Before Chris could explain, Mark interrupted and explained to the audience who the Gronkowski family was. He said that they were all Super Bowl champs. All of them had many rings both for playing baseball and football. Barbara told them that their parents must be bursting with pride. She said that at very least they were worth feeding all those years.

Kevin wanted to get back down to business. He told Chris that there are already dozens of mixer bottles on the market. Chris told him that there’s nothing on market already with the classic pop top that was also insulated stainless steel. He did mention that there are other bottles out there that were also stainless steel, but did not have the vacuum seal and weren’t double-walled. The lack of insulation meant that once you put a cold beverage in there, your hand would freeze on the bottle.

Mark Cuban wanted to know when Chris started on the business side of things. He wanted to know if they start to sell them. Chris told him that they had been in business for about six months, and had sold $80,000 worth. Mark told him that wasn’t too bad. It’s not it and said that $35,000 out of the total had been sold that month.

Mark continued with his questioning. He wanted to know where the bottles were being sold. Chris told him that they were selling the insulated bottles in a number of different places, including Amazon, retail stores, and their own website. Barbara asked what the retail price of the bottle was, and Chris told her $25. He continued, stating that their cost to make them was about five dollars per item.

Chris told the Sharks that he really believed in the product because their margins were huge. Alexander Rodriguez, or A-Rod as he is more commonly known, asked Chris what Ice Shaker competitive advantage was. Chris said that he was the first market to with the product. It was getting great reviews online. He didn’t even have to think much money into marketing.

Barbara wanted to know why Chris hadn’t put his famous name on the product. Chris told her that he wanted the product to succeed on its own merit. He wanted people to actually want the Ice Shaker instead of them buying it on a whim after one of his famous brothers posted it on Instagram. Lori wanted to know why they didn’t just call it the Gronk-Shaker. The brothers looked at each other confused.

Mark said that he understood where Chris is coming from, but at the same time, he wanted to take any competitive edge that he could. Kevin wanted to know what Chris was going to use the money for since he didn’t exactly need the cash. Chris explained that he wanted the expertise of the Sharks. Kevin said that he likes the product because he was a huge Gronk fan. He wants to make money though and was only willing to do the deal if they were willing to put their name on it. He offered Chris $100,000 in exchange for 20% equity stake in the company

A-Rod was up next. He said that he owned many gyms in over 20 countries. He also said that he understood athletes. He felt like Chris was a guy coming into the Yankee clubhouse, and he was a person that you would want in the foxhole with them. He said that Hughes interested, and petitioned Mark to join him in funding the business. Barbara said that she also had an offer, but Alex and Mark continue to talk over each other.

Mark and Alex both agreed that 10% equity was not enough for both of them. Mark told Chris that he had to think about how much value each of them could add to the business. Mark offered them $150,000 in exchange for 20% equity. That was raising how much money they were giving him. Mark said that they could focus on major athletes, and put it in the Mavericks locker room. Lori looked like she was about to make an offer to, but Mark cut her off. He said that they didn’t want to wait around and if Chris wanted to do business with them he would have to decide immediately.

Mark said that Chris needed to give him an answer right now. The show cut to a commercial break, increasing the suspense. Lori objected, stating that Mark and Alex were afraid of the ladies getting in on it. Barbara said that you’d be willing to give them $1 million in exchange for a 10% just to be able to work with them. She said that she would just want to hang out with them.

On a more serious note, Barbara said that Chris should take Lori’s comments to heart and change the name immediately. She thought that it should be in big capital letters along the cup. She offered $100,000 in exchange for 10% of the business. She claimed that no one was as smart as her when it came to marketing. She claimed to have done it with all of her brands that she invested in Shark Tank.

Lori pointed out that she hadn’t even had a chance to give her an offer yet. She asked if she could show her references, and pulled out a piece of paper with all of the businesses she had invested in. All of them were million-dollar companies. Mark Cuban said that he is taking multiple companies to multibillion-dollar operations. Lori offered $100,000 in exchange for 15%. All of the Sharks were in, which was very unusual for the Shark Tank. Chris said that he appreciated all the offers, and want to see if Lori would join in with Mark and Alex.

Mark said that he wouldn’t do that. Lori said that Mark answered it, but she didn’t hear what Alex had to say. She wanted to know if Alex would take her into Lou’s Mark. Alex said that he’d already given Mark his word, and went back out of the deal like that. Kevin explained that Lori just got thrown under the bus, and wanted to know what Chris was going to do. Chris said that he was pretty firm with the evaluation, and was wondering if they would do $150,000 in exchange for 15% equity. Alex and Mark agreed.

Ice Shaker Now in 2018 – The After Shark Tank Update 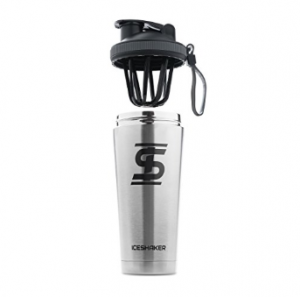 Getting a deal with the Sharks seems to have been a home run for Chris Gronkowski and his shaker bottle business. Ice Shaker has made many positive changes since their episode aired. Their sales have also shot up from just $80,000 in the first couple months to millions of dollars in the months that followed. According to the Shark Tank update on their blog, they have a difficult time keeping their items in inventory since they are flying off the shelves so fast. That is believable because while I was on their site researching this article, there was a little pop-up every five seconds saying that someone had purchased an item. Ice Shaker has released a 16-ounce cup as well as their original 26-ounce cup. There are seven different colors that you can choose from. In addition, they also have T-shirts and fashionable tumblers for sale on their site. Click here to purchase one for yourself.